It seems like it was only yesterday that I reviewed the Asus ROG (Republic of Gamers) Striker II Formula motherboard, which used the nForce 780i SLI chipset. Although the 780i SLI was pushed as a new chipset it was clear that it was basically an nForce 680i SLI that had been revised to add in an nForce 200 PCI Express chip. The Striker II Formula was a decent motherboard that cost a surprisingly high £184 at the time of review although it has now dropped to somewhere south of £160.


So where, you may wonder, does the Striker II Extreme fit in to the picture and how the heck can it justify such a high price? These are both good questions so let’s start by getting the matter of the price out of the way first.


Asus charges top dollar for its ROG motherboards and it delivers a stack of features in return but even so the list price of £285 for the Striker II Extreme is, um, extreme. You can find the Asus on sale for about £260 but even a reference design 790i board, such as the XFX 790i SLI, costs £240 so it’s clear the ROG premium is actually quite minimal in this instance. In fact, the reason this and all other 790i boards cost quite so much is simply because nVidia is charging so much for the chips. Rumour has it the price is as high as US$110. To put this into perspective, mainstream Intel chipsets sell for about US$40. 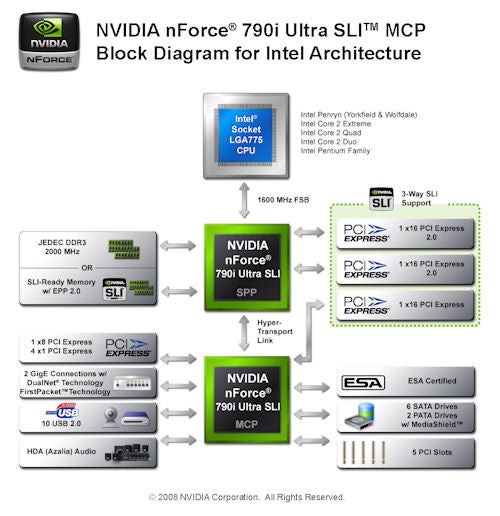 The block diagrams for the 780i SLI and 790i SLI show that the two chipsets share a great deal in common although there are two significant differences. The first change is that 790i is a twin chip design that incorporates the functions of the nForce 200 into the Northbridge which makes the layout of the board tidier and it also helps the chipset cooling.


The second change is system memory as the 790i supports DDR3 instead of DDR2. Specifically the 790i SLI supports DDR3 up to 1,333MHz while the 790i Ultra SLI on this Striker II Extreme adds speeds of 1,600MHz, 1,800MHz and 2,000MHz when you’re overclocking. You pay a hefty premium for the extra memory speed as we expect Asus will launch its Striker II NSE next month for about £50 less than the Extreme.

The layout of the Strike II Extreme is dominated by the Fusion cooling system and the three PCI Express graphics slots. The low profile Southbridge cooler is securely connected to a copper backing plate with two screws, while the Fusion block on the Northbridge is attached with four screws and the two coolers on the power regulation hardware are also screwed down. Heatpipes link the coolers together and they encircle the CPU socket with one small gap for the eight-pin ATX 12V power connecter. Asus includes a bag of adapters in the package to make life easy if you decide to plumb the Fusion block into your water cooling system.


All of the neat features from the Striker II Formula have been carried over to the Extreme model including the LCD Poster, the Reset button on the I/O panel, the flick switch that clears the BIOS, and a PCI Express x1 slot above the top graphics card that accommodates an audio riser card.


On the I/O panel there are six USB ports and one Firewire and in the package there’s a bracket with two more USB and a second Firewire. Other ports include dual Gigabit LAN, two eSATA and digital audio connections. At the foot of the board there are headers for two more USB ports along with Power and Reset micro buttons and moving around to the other edge of the board the six SATA connectors and single IDE connector are laid down. Next to the memory slots there is the floppy connector and the main power connector. 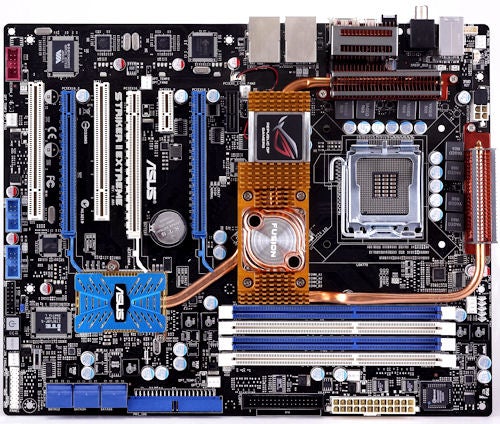 I’ve spent a good long while studying the layout of the Striker II Extreme and the only item I might like to change is the illuminated ROG logo on the Northbridge cooler but even that is a trivial issue as you can disable the light in the BIOS.


Testing with a Core 2 Extreme QX9650 started very well. The first job was to update the BIOS from version 0402 to 0504 which I did with the minimum of fuss by connecting up a floppy drive and then initiating EZ Flash within the BIOS. Once I’d finished testing the Striker II Extreme I shut it down, pulled the system apart and boxed it up. Then I received BIOS 0507 by email. Cursing gently I plugged the system back together and decided that I would make the most of the hassle by updating the BIOS from a USB key rather than an oldy-worldy floppy.

Once I’d replaced the power supply the Asus started up but the BIOS was corrupted and the machine wouldn’t POST which led me to investigate BIOS recovery. This is the sort of detail you only find out when the muck truly hits the fan and in the case of the Extreme it was surprisingly simple. You don’t need a bootable DOS floppy but instead you simply copy a BIOS file and the Award flashing utility on to a USB key and then start the system. The motherboard found the key and software and loaded the BIOS without any trouble and a few moments later the system was up and running. I re-ran a few tests and concluded that BIOS 0507 didn’t offer any significant improvement over 0504.


I reckon there are three things you might take away from that little tale.


First and most obviously, it’s always a good idea to plug expensive DDR3 memory in properly. Second, I might have suffered an appalling piece of bad luck but it seems to me that the Extreme killed my 850W Enermax Galaxy. Third, someone at Asus has worked on BIOS recovery and they have done a damn fine job.


Now ask yourself this. Did they work on BIOS recovery because Asus is a thorough company that crosses the I’s and dots the T’s or did someone at Asus have a hunch that fools like me would need to have their coals hauled out of the fire. 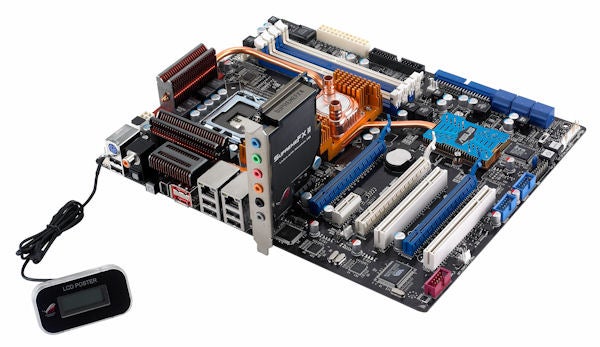 No, I don’t know either.


The performance is good and matches Intel’s X38 but the BIOS is both complex and detailed and you need to pump a surprising amount of juice into the components to overclock the hardware.


Overclocking the QX9770 was easy enough, however the Asus required a couple of fans blowing across the memory and chipset to prevent the temperature climbing above 60 degrees. At 70 degrees the system restarts. The reference design for 790i includes an active cooler and it seems that Asus has been ambitious to opt for passive cooling.


Naturally the Extreme will appeal to anyone who is considering SLI or Tri-SLI but I find myself torn on this point as a single GeForce 8800 GTX delivers all the performance that I need. If you have a 30 inch Dell TFT and want to play Crysis on High Quality then you will doubtless disagree.


The Striker II Extreme is a magnificent motherboard that delivers features and performance in equal measure. On the downside the price is absurdly high and with nVidia’s unfortunate history with chipset reliability you’d be wise to wait a while to see whether 790i Ultra SLI suffers any problems.