Stylish and router; two words in the English lexicon that rarely find themselves in together in a sentence without a negative modifier before the former. And yet stylish is what the Asus RT-56U wants itself to be thought of as. Not that its aesthetics are all the RT-56U is touting, there’s an impressive feature set beneath that glossed-up exterior, but it’s definitely the look of the thing that will catch your eye initially. 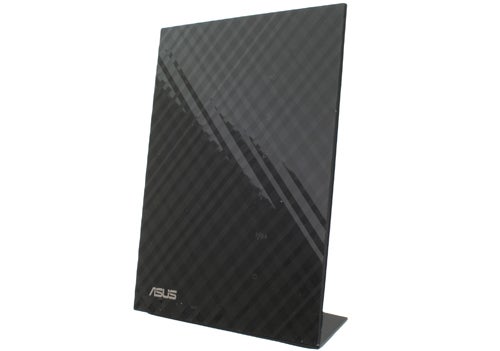 The design won’t be to everyone’s tastes; we think the glossy, crosshatch effect is quite tasteful. We think it looks worth its £99 asking price. The shape of the RT-56U means you’ll either have to stand it upright on its vertical stand, or have it laying flat on a desk; the problem with this is the placement of ports on the right-hand edge could leave wires visible. We’d have preferred to see rear-facing inputs.


Still, we can’t fault the RT-56U for its provision of five Gigbit Ethernet ports (four for adding computers, one for connecting to your modem), alongside two USB ports. If that’s not enough connectivity for you, then dual-band 802.11a, b g and n Wi-Fi should be. Not only is the RT-56U able to run two Wi-Fi networks at once, it also features no fewer than two antennae for 2.4GHz networks and three for 5GHz. What’s more, the RT-56U has a feature called Ai Radar that purports to focus its radio in the direction of connected clients, boosting both signal strength and range.


There’s an LED for power, each Wi-Fi network, wired network activity and the USB ports; plus the Ethernet ports have their indicator LEDs integrated, so there’s no risk of not knowing what the RT-56U is doing at any given moment. We’re pleased to note that the LEDs are surprisingly unobtrusive – Asus seems to understand that running these at full brightness isn’t mandatory.

The admin interface is visually unchanged on the RT-56U, the only differences between this router and others of Asus’ we’ve looked at being the options available. That’s nothing to moan about, though, because other than finding the occasional bit of ‘Engrish’ here and there, we found the interface intuitive and easy to use.


There’s a huge range of configuration options, which is unsurprising as the RT-56U has a huge feature set. There are almost too many Wi-Fi options to choose from. Unsurprisingly you can set-up the different frequency networks independently, with separate SSIDs, passwords and levels of encryption. WPS is available if wanted, and you can even hook up to a RADIUS server. The option to select the days and times when the Wi-Fi will be active or not will probably be of limited appeal, but it’s patently better to have it than not.

Firewall options are similarly comprehensive. As well as standard features such as DoS protection and MAC filtering, the RT-56U also offers a time-restricted URL filtering list. Need to stop employees ‘tweeting’ their every activity during office hours? Go ahead. Annoyed by hoe many hours your daughter is spending on Facebook? Just throw it on the blacklist. And hope they don’t own a smartphone, of course. 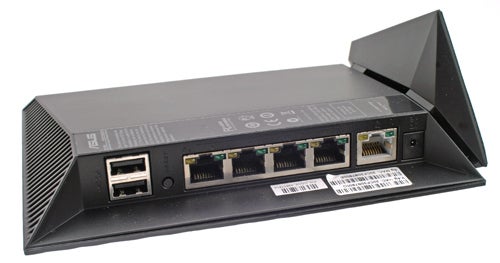 The RT-56U’s two USB ports can be used for attaching a hard drive, a printer or a compatible 3G dongle (sadly none of the adaptors we have in the office were compatible). Hard drives can then be accessed either as a network drive or via FTP, and there’s even the option to make that FTP server available over the internet with several choices of dynamic DNS services if you want to use those.


The RT-56U will also make any media files on attached drives available via a built-in uPnP server. We found this worked perfectly well with both a PS3 and an Xbox 360, with literally zero configuration required on our part, which is good. The RT-56U also has a software utility on a bundled CD that enables downloads over HTTP, FTP or BitTorrent to be handled by the router, with the files being saved to any attached USB hard drive. The only possible downside to this tool is that it is Windows-only. 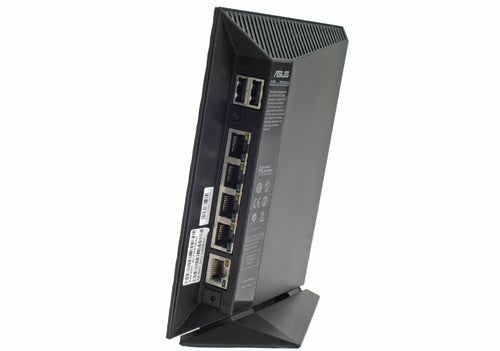 All this would be for nothing were the Asus RT-56U sluggish as a mule, but in fact it proved one of the fastest routers we’ve ever tested. With the RT-56U sat between a two systems, one connected via 2.4GHz Wi-Fi and the other via Gigabit Ethernet, we saw average transfer speeds of 92Mbit/s within the same room, only dropping to 74Mbit/s when separated by two brick walls. Switching to the 5GHz network saw results improve significantly to 124Mbit/s up close and 103Mbit/s at a distance. Admittedly nowhere near the “up to 900Mbit/s” transfers boasted on the RT-56U’s packaging, but still impressive.


It’s not often that a router can be considered remotely interesting, but the RT-56U is such a rarity. Not only is it attractively designed, it’s also very well featured, and offers exceptional performance. Plus, it’s well-priced considering what’s on offer.