The Asus RT-AC87U is the first of a new grade of 802.11ac wireless routers. Having just gotten used to brilliant AC1900-class models like Asus’ own RT-AC68U, the Linksys EA6900 and our current favourite, the D-Link DIR-880L, now we brace ourselves for the onslaught of ‘AC2400’ rated products and Asus is leading the charge.

So do AC2400 routers represent a new level of wireless performance or just marketing hyperbole and a higher price tag? 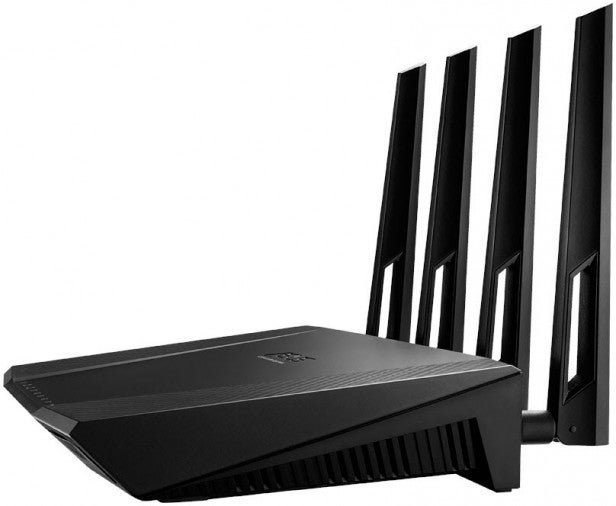 Important new routers tend to mean new designs – the Netgear Nighthawk R7000, D-Link DIR-880L and many others have followed this trend – and Asus is following the trend with the RT-AC87U.

One of the last bastions of upright router design, Asus has finally ditched the form factor with the AC87U and it lies flat with monstrous antennas that give the boats attached to the DIR-880L a run for their money. The switch pays off because the AC87U looks great. It takes inspiration from the R7000, but adds more striking angles that are part supercar/part Transformer.

A downside is the activity lights are bright and prominently positioned, but they can be switched off if they frustrate. Furthermore Asus has nailed the build quality and the AC87U is rock solid while its matt finish resists dust and fingerprints. It does run a little warm underneath, but nothing that will damage any delicate surfaces and if you’re still worried it is wall mountable. 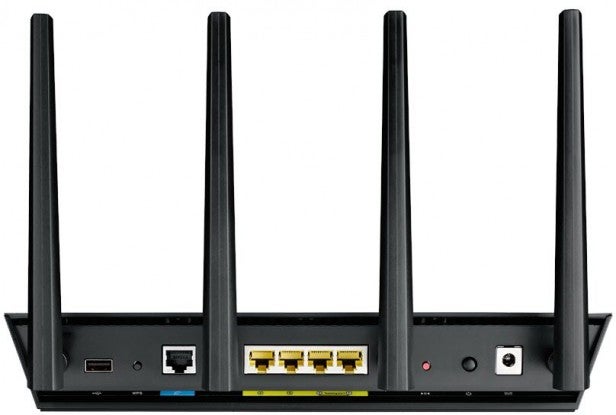 The obvious talking point is the AC87U’s AC2400 rating and it comes courtesy of a brand new chipset: the Quantenna QSR1000. What it brings to the table are 4×4 streams (hence the four sizeable antennas), the first time 5GHz WiFi has stepped up from 3×3 antenna arrays.

The downside is to get these new speeds you will need a 4×4 compatible receiver and currently the only model – Asus’ own PCE-AC87 (an upgrade to the PCE-AC68) – has yet to hit the market. Meanwhile most smartphones (1×1), tablets and laptops (2×2) don’t even reach a 3×3 array. This is an extreme router requiring an extreme receiver. 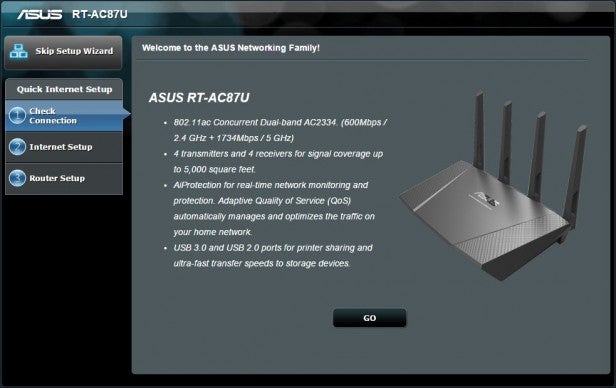 The good news is the AC87U also works in a bridge mode (how we tested) and inevitably it ticks all the other boxes for a top of the line router. These include Gigabit WAN and four Gigabit LAN (though surely a fifth or sixth port would’ve been a fine differentiator), IPv6 compatibility and WPS and WPA/WPA2 security.

There are also USB 2.0 and USB 3.0 ports, though the USB 3.0 port is front mounted and I’m not a big fan of the flip down front which hides it or the messy look wiring creates if you have a device permanently connected to it.

Ending on a positive: Asus has teamed up with Trend Micro to offer
‘AiProtection’, which blocks malicious addresses and intrusions,
triggers alerts if infected devices are connected to your network and
beefs up parental controls.

Despite the complexity of the new technology within the AC87U it remains just as easy to setup as any other Asus router and that means even the most technophobic of users shouldn’t worry. 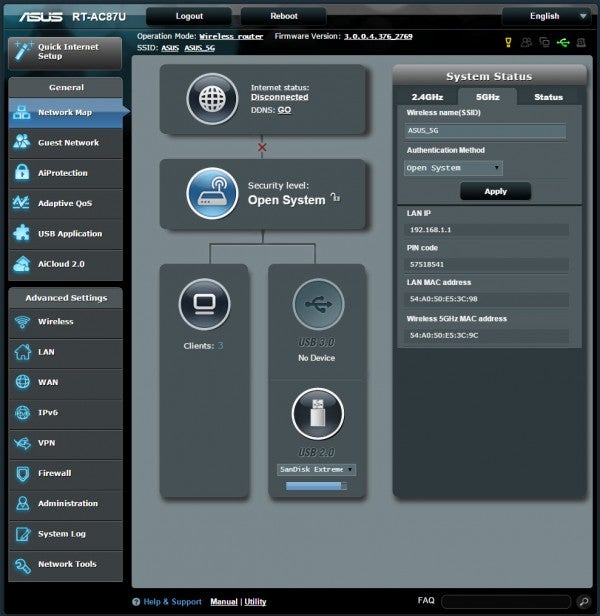 Plug in the router, let it boot, connect to one of its open WiFi signals (5GHz and 2.4GHz are marked) and it opens a browser tab and begins the setup wizard. This includes setting your own SSIDs, WiFi passwords and admin password and username. It’s fast, simple and you’ll be up and running in five minutes.

The ageing Asus grey and black UI could use a less moody spruce up, but it is still intuitive to navigate and as it isn’t broken the company is clearly in no rush to fix it.