On paper the Asus RT-AC52U is a game changer. At just £72 it is Asus’ first attempt to launch an 802.11ac router right into the middle of 802.11n 2.4GHz and 5GHz products. Get it right and it adds fuel to the wireless ac revolution, cut too many corners and it proves counterproductive misrepresenting the significant benefits of 802.11ac. 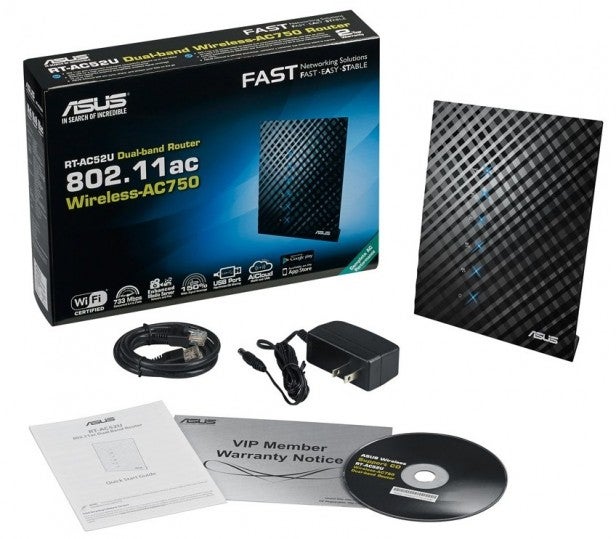 The first thing that strikes us about the AC52U is how tiny it is. At just 187 x 145 x 25 mm and 270g it’s smaller and lighter than a Nexus 7 and Asus has managed to integrate the PSU into a small bulge on the mains plug. It verges on portable.

While shrinking the dimensions, visually the AC52U looks every bit a member of the company’s stylish router line. It drops the external antennas, but keeps the same tasteful textured crosshatch finish that does a great job of resisting fingerprints. Ports are switched to the side, but this is because the AC52U is also wall mountable.

Where we do have a complaint is the slide on stand. It is fiddly to fit and weakly made. It is the first obvious sign of cost cutting, but far more significant savings have been made internally. 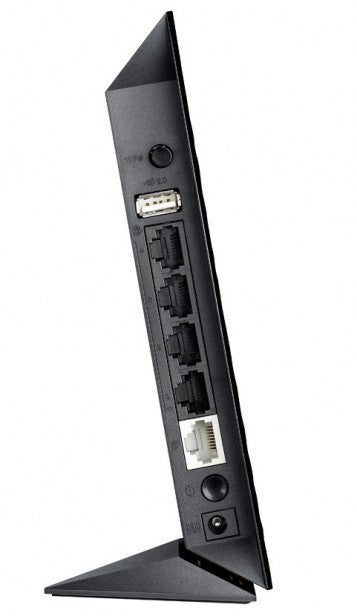 To put it kindly the AC52U’s specs are limp. Despite being an 802.11ac device, Asus quotes a mere 433Mbits of bandwidth for this channel because it has just a single 5GHz antenna. Premium wireless ac routers have three antennas for a 1300Mbit theoretical maximum and midrange models drop to two for 833Mbit, but this is the first single antenna model we’ve seen.

Dropping to one seems pointless because it is less than the 450Mbit associated with triple antenna 802.11n 5GHz routers. Compounding matters the AC52U also has just two 2.4GHz antennas so wireless n bandwidth is reduced to 300Mbit.

The cuts keep coming as well because the AC52U is the first 802.11ac router we’ve seen to offer no Gigabit Ethernet WAN or LAN ports. The 1x WAN and 4x LAN are restricted to (the now badly named) 10/100 Fast Ethernet meaning the AC52U cannot input data as fast as it would like to output it and it cannot handle Fibre broadband connections over 100Mbit.

With Virgin already offering 120Mbit and BT set to scale well past 100Mbit this year this is a hugely problematic bottleneck. Given the incidental cost of Gigabit Ethernet ports these days cutting back on the WAN port in particular is a poor judgement call.

Less problematic is the inclusion of just a single USB 2.0 port. USB performance over a network has yet to trouble the bandwidth of this standard, despite the growing shift to USB 3.0 ports, and having just one is to be expected at this price point.

Still all these cuts are a shame because behind them is much to admire. WPS, WPA/WPA2 security bases are covered, the AC52U can work as a router, bridge or access point, it is compatible with Asus’ AiCloud file syncing service and supports 3G and 4G dongles. Remarkably Asus also bundles an 802.11ac USB dongle, though of course it is a single antenna 433Mbit version. 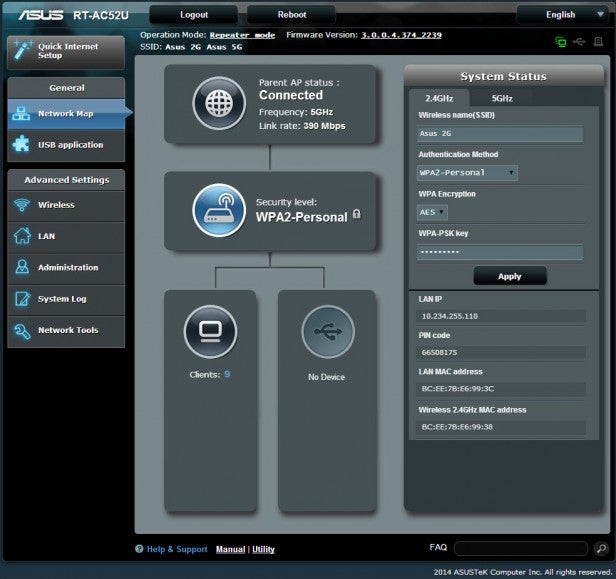 What the AC52U doesn’t lose is Asus’ slick setup process. Plug in the router, connect to its open wireless signal and it automatically opens a tab in your browser to set the wireless and admin passwords and configure your Internet connection. This approach is mirrored by Linksys and the duo set the stand others follow.

What is showing its age though is the ‘angry teenager’ ASUSWRT black and grey user interface, but it is clear and intuitive technophobe friendly. Just a lick of new paint please Asus.