Given the specs, the Asus ROG Zephyrus S GX701 is fantastically light, and promises appeal to both gamers and creatives.

A slimmer, sleeker update to the GX531, with Nvidia’s laptop-sized 20-series GPU running the show. The all-new Asus ROG Zephyrus S GX701 looks set to blow the competition away.

The design of the new Zephyrus S closely follows that of the whole ROG range of gaming laptops in general, and the previous Zephyrus S GX531 in particular.

In other words, that’s metal pieces finished with black paint, and textured triangular swathes, with the edges accented by a fancy copper finish.

This is the same ‘plasma copper’ colour scheme Asus has been using since 2015, to mark out gaming components and PCs of distinction. This isn’t your typical red ‘n black Asus ROG laptop, this is a more refined and, dare I say, grown-up look.

As such, Asus is hoping that the Zephyrus S GX701 will be able to masquerade as a professional laptop too; while there’s RGB lighting options ahoy, thanks to per-key lighting, plus the attendant glowing ROG logo on the back of the laptop, you can turn all of this off for when it’s time to get down to business. 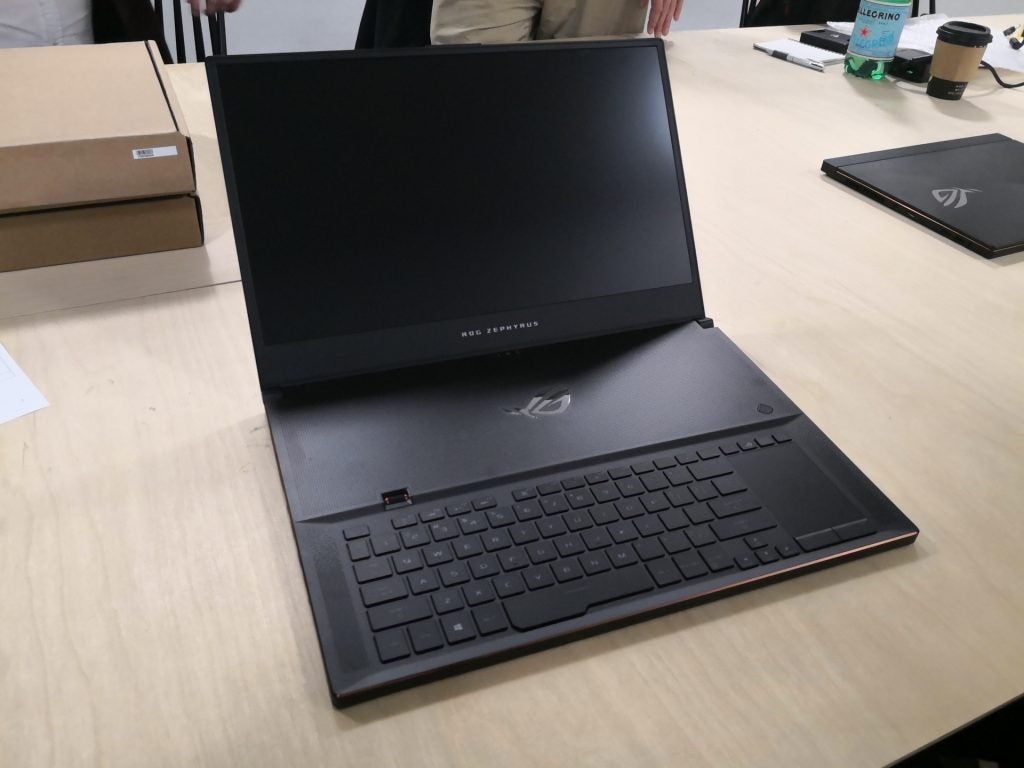 The new Zephyrus S is lighter and more compact than your typical gaming laptop, and boasts a more understated design.

The Zephyrus S GX701’s display measures an impressive 17.3-inches across the diagonal.

There will be HDR and non-HDR versions available to buy, with all models boasting a maximum refresh rate of 144Hz, 3ms grey-to-grey response time, and Full HD (1920 x 1080) resolution.

The bezel’s super-thin, too. While I couldn’t be told exactly how thin, Asus has managed to get the display so close to the edge by virtue of not building a camera in. Instead, you’ll be able to clip a front-facing camera onto the top of the screen, should you want to. It’s currently unclear what the resolution of this camera is, if Windows Hello is supported, or even how much extra it costs. 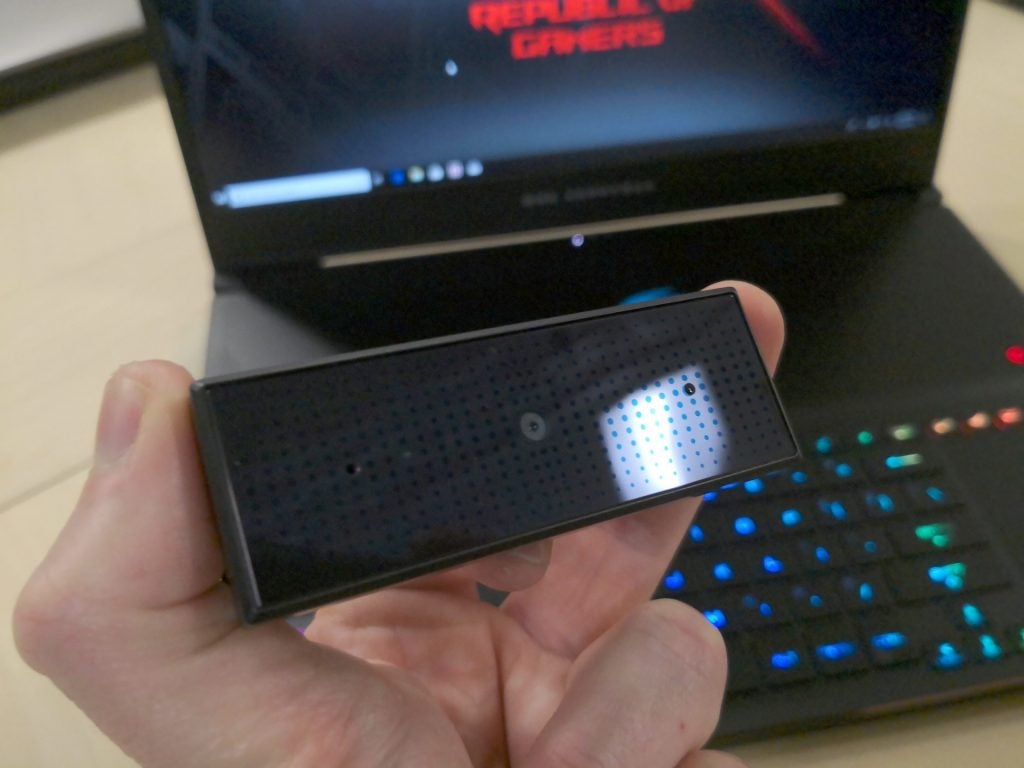 The specs of this little camera Asus has developed for the Zephyrus S are currently unknown.

Whether you’re streaming or not, Asus says that the Zephyrus S GX701 is not only ideal for gaming, but will be suitable for design work, too.

According to the official spec sheet, the Zephyrus S GX701’s display covers 100% of the sRGB colour gamut and is Pantone rated, promising a high degree of colour fidelity. At the time of writing, there was no word from spokespeople on Adobe RGB or DCI-P3 coverage.

The excellent Asus ZenBook Pro 15’s display delivered just under 100% coverage of the sRGB and Adobe colour spaces in our tests, and that was a Pantone Validated display, too. Hopefully the Zephyrus S GX701 will equal if not exceed this.

The screen of the model I saw appeared to have a similar if not the same anti-glare coating that Asus has used on laptops like the ROG Strix Hero II and ROG Strix Scar II. Whether is uses the same tech or not, I liked that any ambient light reflected by the screen caused minimal glare. 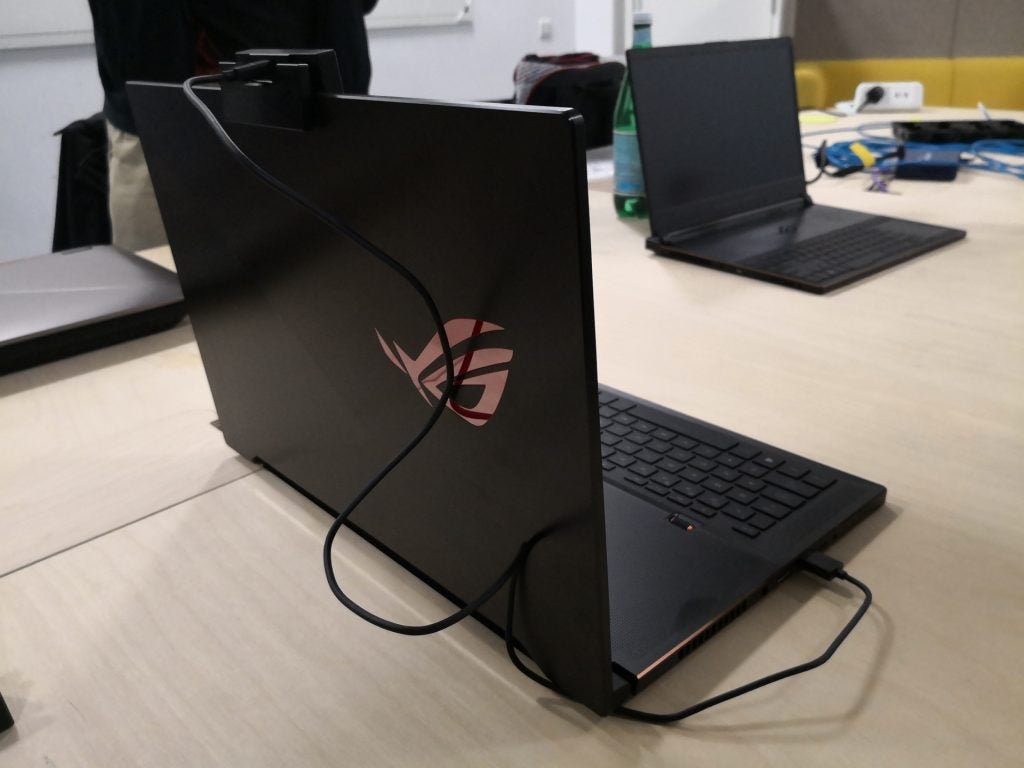 The camera clips on neatly to the top and connects to the Zephyrus S via one of the USB-A ports. Just remember to take it off when you close the laptop.

As there’s an Nvidia graphics card present in the Zephyrus S GX701, there’s also Nvidia G-Sync, which is designed to synchronise the display’s refresh rate with the frame rate of whatever game you’re playing.

But, as G-Sync is a power-intensive thing – it requires the GPU to be constantly active, therefore burning up more fuel – there’s also Nvidia’s Optimus tech, which sees the main CPU’s integrated GPU (an Intel UHD Graphics 630) running things if you’re not plugged into the mains, and the dedicated GPU only springing into action when you’re gaming.

Asus says this ‘GPU switch’ is a new and exclusive feature, that will let you turn your Zephyrus S GX701 into a gaming beast or more battery-friendly workhorse with ‘a few clicks and a reboot’.

And speaking of GPU performance… 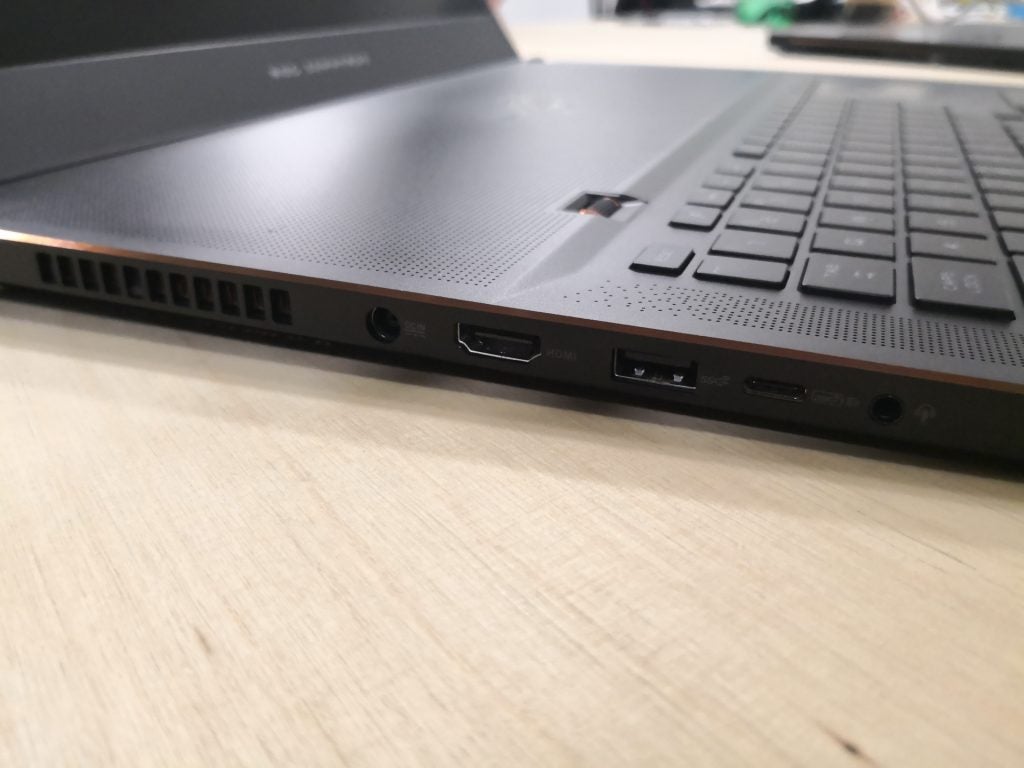 Asus ROG Zephyrus S GX701 specifications – what GPU does it have?

The Asus ROG Zephyrus S GX701 will be one of the first gaming laptops of 2019 to feature the new Nvidia GeForce RTX 2080 Max-Q Design graphics cards.

This means you get dedicated Tensor cores for AI processes which work in tandem with RT cores to improve real-time ray tracing – which in layman’s terms means much more realistic and immersive lighting and shadow effects in games.

The Max-Q RTX 2080 is also backed up with 8GB of GDDR6 video RAM – the same amount of memory you get with the standard desktop Nvidia RTX 2080.

While full pricing and configuration information isn’t currently available, I’m told that your standard memory options see you able to get a Zephyrus S GX701 with up to 24GB of 2666MHz DDR4 RAM, which would more than meet the requirements for Battlefield V with ray tracing turned on.

While that 14nm processor doesn’t follow Intel’s newer Whiskey Lake design, which promises gigabit Wi-Fi support as standard, the Zephyrus S GX701 features Intel’s latest 802.11ac module with 2×2 MIMO, which will apparently give you gigabit wireless speeds when paired with routers like Asus’s own ROG Rapture GT-AC5300, thanks to active radio channel scanning.

If you prefer to be wired in when gaming, then you’re going to need an adapter, as there’s no Ethernet port. There are two Type-C USB 3.1 ports (one is a Gen 2 port with DisplayPort 1.4 and Power Delivery, the other a Gen 1 port) and three Type-A USB 3.1 ports (two Gen 1 and one Gen 2). As well as this, there’s an HDMI 2.0b port, a Kensington lock port, and a combination 3.5mm headphone and microphone jack.

With one USB-C port able to keep the battery topped up with a 65W Type-C adapter, you won’t have to lug around a giant brick of a mains adapter. While you get DisplayPort 1.4 support, Thunderbolt 3 is not supported. But with the HDMI 2.0b port, Asus says that the Zephyrus S GX701 will be able to work with up to two 4K displays running at 60Hz. 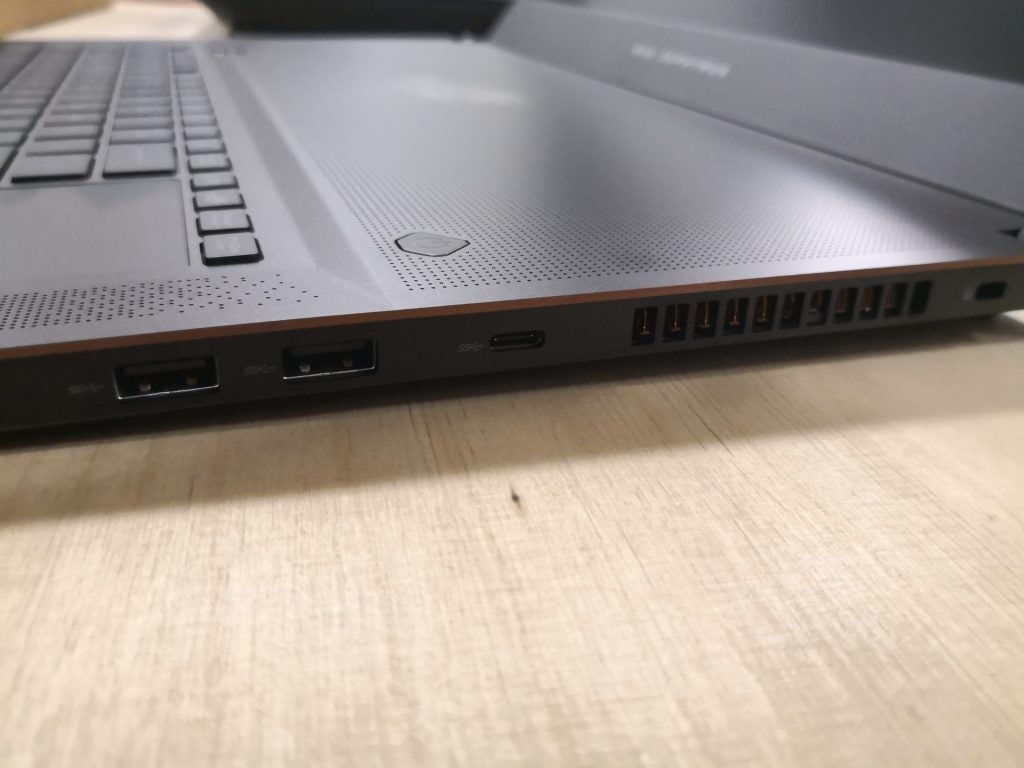 The Asus ROG Zephyrus S GX701’s ports on the right-hand side: two USB-A ports, a USB-C port, and beyond the thermal vent, a Kensington lock slot.

I didn’t have enough hands-on time to play any games or run any benchmarks and the model I saw was not running the final version of the software, so I can’t really offer any useful comment on performance.

I was able to hammer out out a few sentences on the keyboard and swish around on the trackpad, and so far, so responsive, though left-handers might not appreciate the positioning of this. The clickwheel above the keyboard is ideally situated for scrolling through pages and menus with your left hand. 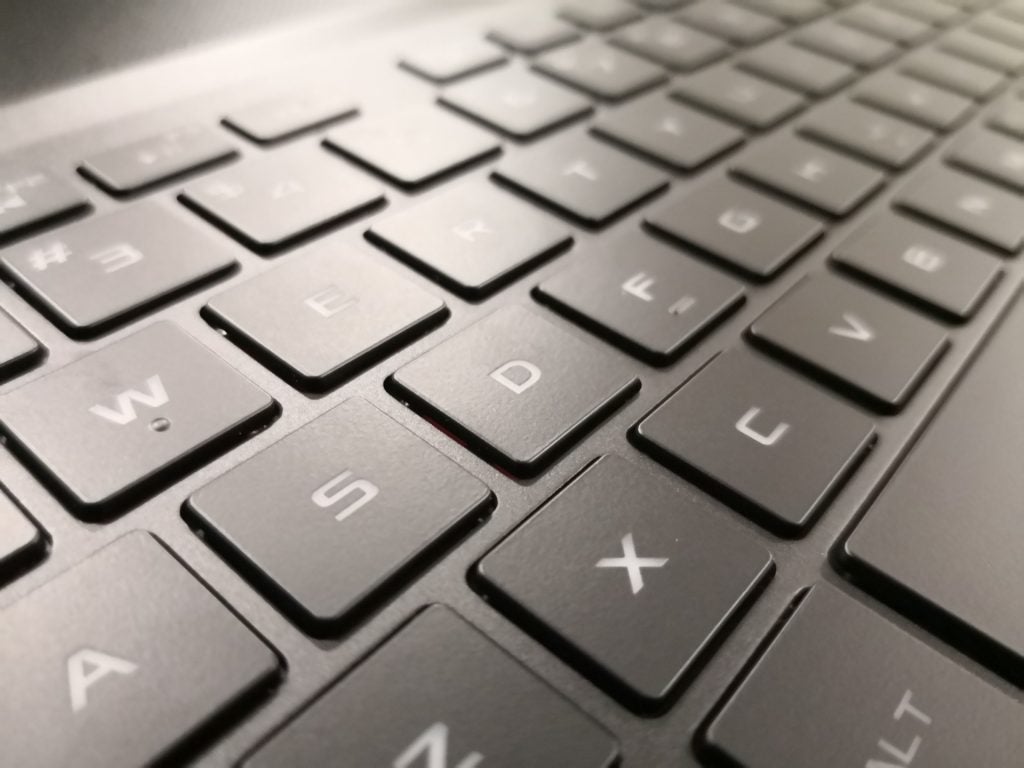 Asus spokespeople have told Trusted Reviews that the non-HDR version will be the first to market, sometime in Q1 this year, with the HDR version arriving later.

The Asus ROG Zephyrus S GX701 us incredibly light, which, when you consider how unforgiving gaming laptops are in this department, is remarkable. If Asus can pull off the promise of being able to deliver a laptop that can handle high frame rate gaming, comfortably give you enough battery power to double as a workhorse as well, thanks to GPU switching, then I think Asus will be on to a winner with the Zephyrus S GX701.