The Asus ROG Zephyrus Duo is a fascinating gaming laptop thanks to its dual-screen setup, but has such an extravagant price that it's only really recommended for those who will get the most out of it. With limited software support, it's not very useful to your average gamer, but those who stream games to Twitch will no doubt find the extra screen space and touch interface invaluable

Imagine if you merged a Nintendo DS with a gaming laptop. The Asus ROG Zephyrus Duo is the end result, featuring a pop-up touch screen below the main display.

Why does a gaming laptop need a second display? Good question. Asus claims the ScreenPad Plus allows you to “optimize your space for gaming, content creation, and more”. In practice that means you can browse the web or watch a YouTube video as you play a game, while streamers can keep all of the chats and broadcast controls visible while playing.

There’s certainly an audience for this laptop then, even if it is an incredibly niche one. But with a starting price of £3000, you’re really going to have to make the most of that ScreenPad to make it a worthwhile buy.

The Asus ROG Zephyrus Duo’s ScreenPad is essentially a touchscreen that stretches across the main chassis, capable of displaying apps or small browser windows.

It proved useful for opening a web browser to search for game guides without having to abandon (or even pause) my Crusader Kings 2 campaign. You can even leave your Steam chat open or configure the performance and RGB lighting settings. There’s a lot of options here, although I always kept thinking my smartphone already offers all of this functionality.

Asus claims specific AAA games make more use out of the second display, with the likes of Dying Light 2 allowing you to move inventories, mission logs and co-op chats down to the ScreenPad. I’ve got a real bugbear with Crusader Kings 2 menus cluttering the screen, so such features really appealed to me. Unfortunately, I was unable to drag them down to the ScreenPad, as the game simply does not offer support. This will be the case for the large majority of games. 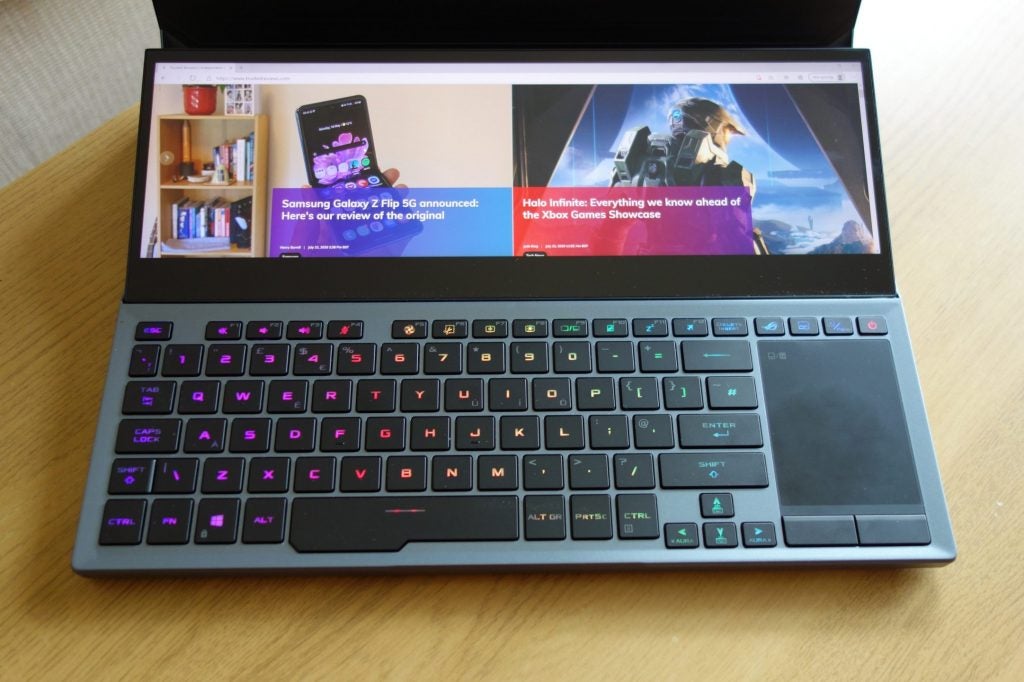 Apps such as Overwolf also show real-time stats on the ScreenPad for the likes of League of Legends, Fortnite and CS:Go, but compatibility is limited. The concept of the ScreenPad is great, but I worry Asus is going to struggle finding developers willing to offer support since this is such a niche product. For this reason, I wouldn’t recommend buying the Zephyrus Duo for solely gaming purposes.

If you’re a video game streamer or content creator however, I think the Zephyrus Duo could prove a very useful laptop. Being able to keep broadcast controls and chats open and visible without interrupting your game could prove invaluable, especially with optimised apps such as Xsplit Gamescaster.

I can also see it proving useful for editing video, where you’re constantly working with multiple windows. Asus also claims the ScreenPad supports stylus input, so you can use it as a mini drawing tablet before effortlessly dragging your creation up to the gorgeous 4K screen above.

When opening the laptop, the ScreenPad automatically tilts up at a 13-degree angle, making it easier to see than say the MacBook Pro’s TouchBar. It’s a nifty mechanism and works flawlessly, while simultaneously allowing the fans to dispel heat up upwards.

To make room for this ScreenPad, Asus had to shunt the keyboard down to the bottom of the chassis, leaving the trackpad atypically squashed into the bottom-right corner. In terms of looks, it’s a little odd. 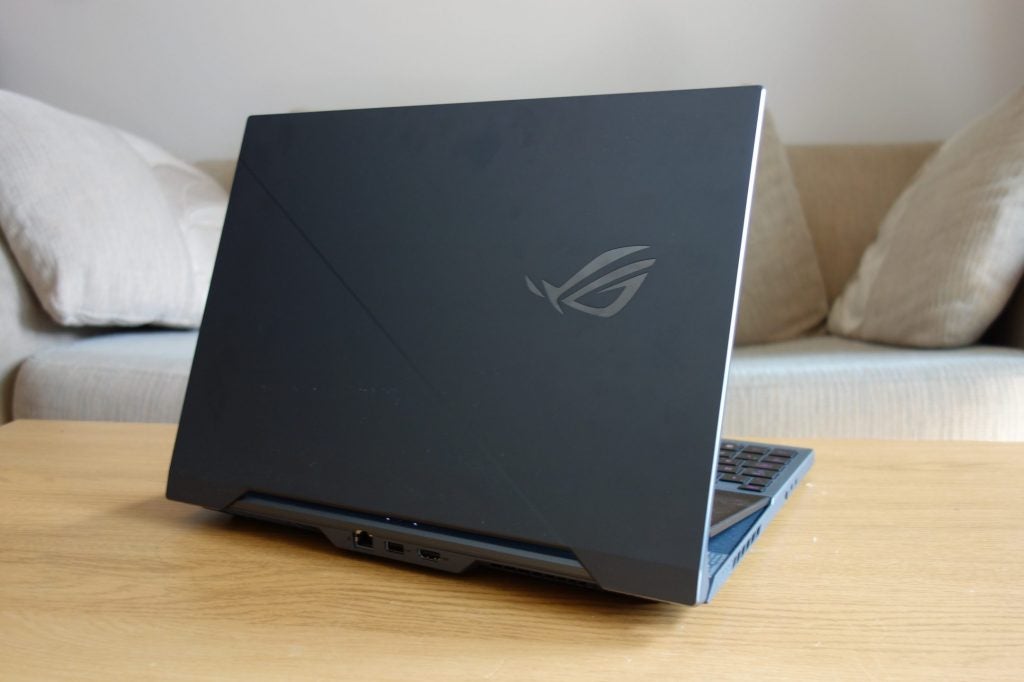 Otherwise, the Asus ROG Zephyrus Duo looks similar to other high-end gaming laptops. There are vents stretched across the rim, and device folds up flat like your traditional clam-shell laptop. It’s a pretty heavy machine at 2.4kg, but that’s not usual for a 15-inch gaming laptop with high-end specs – the Razer Blade 15 2020 hits the scales at over 2kg for example.

You’ve also got a generous offering of ports, with headphone and microphone inputs on the left, and two USB-A and a USB-C (with Thunderbolt 3 support) on the right. Finally, you’ll find HDMI, Ethernet and an additional USB-A port on the rear. Wi-Fi 6 and Bluetooth 5.0 also feature for wireless connectivity. It’s bizarre that there’s no SD card slot given Asus is pitching the laptop at streamers and content creators though.

The Asus ROG Zephyrus Duo’s RGB keyboard feels like an afterthought. It’s been pushed to the front, which is less than ideal since there’s no longer any wrist support.

The keys are also pretty shallow, especially for a gaming keyboard. There’s no clicky feedback, resulting in an underwhelming feeling when pulling the trigger in an FPS. It’s not great for typing on either, and certainly wouldn’t be my choice for long-winded essays. 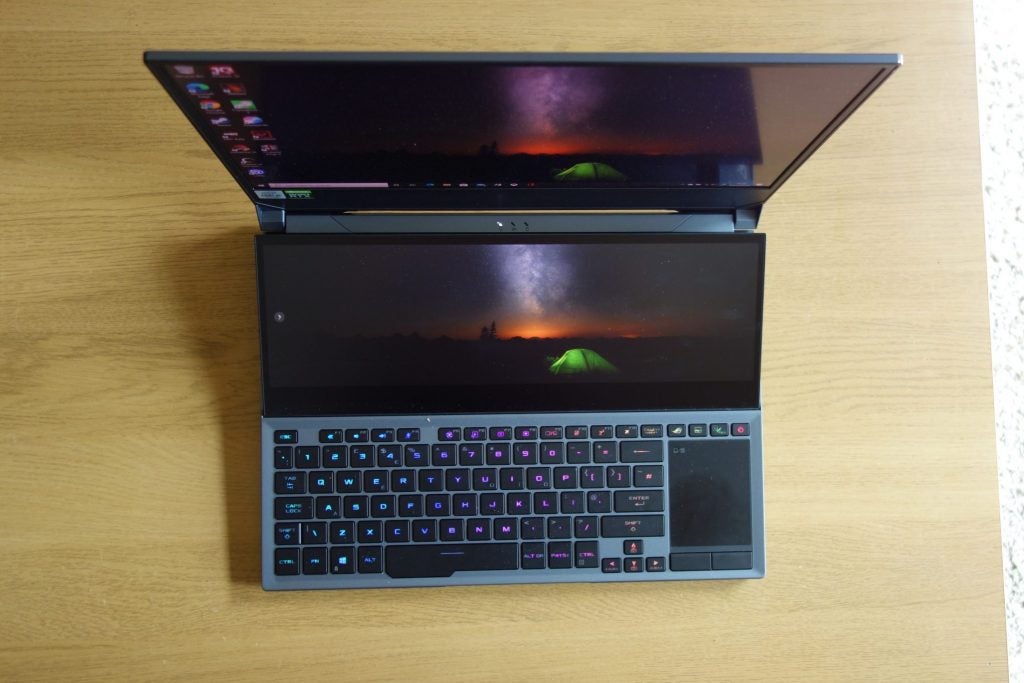 The tiny arrow keys are also a personal bugbear, making it difficult to play games such as Crusader Kings and Civilization. It’s pretty clear that Asus is just assuming you’ll use a dedicated gaming keyboard instead, but then you’ve got to ask yourself whether you’re better off using a desktop gaming PC.

The trackpad has been squashed to the bottom-right corner of the keyboard and it’s ridiculously tiny. There are dedicated right- and left-click buttons underneath, but it’s still an awkward alternative to a more traditional trackpad. You’ll really want a gaming mouse instead. Asus has at least made it possible to turn the trackpad into a touchscreen number pad, while ensuring it’s pleasingly responsive. But there are few other positives to say.

There are two different screen options for the Zephyrus Duo, including a Full HD 300Hz panel and a 4K 60Hz alternative. Asus suggests the former is the best option for competitive gaming, while the latter is more ideal for content creation.

Asus sent me the 4K configuration, and I have to say it looks absolutely gorgeous. The high brightness level and superb contrast ratio (1419:1) complement the detailed display, ensuring colour stands out with eye-popping authority. 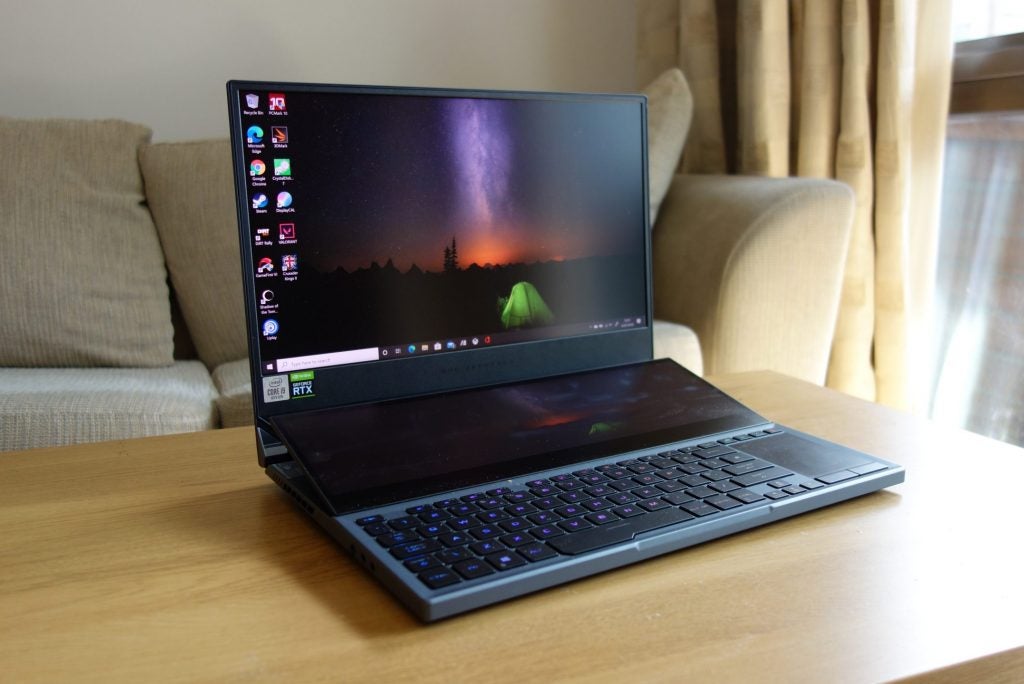 Nvidia G-Sync support will also help to prevent screen tearing, which occurs when the display’s refresh rate falls out of sync with a game’s frame rate performance.

Overall then, the Asus ROG Zephyrus Duo boasts an excellent screen. It’s unfortunate that you can’t combine a 4K screen with a refresh rate higher than 60Hz for a system capable of both competitive gaming and content creation, but I don’t want to even think about the price of such a combination.

The Zephyrus Duo is a monstrously powerful gaming laptop, with Asus offering the option of a Nvidia GeForce RTX 2070 Super or RTX 2080 Super, paired with a high-end 10th Generation Intel Core processor.

The model Asus sent me features an Intel Core i9-10980HK processor and an Nvidia RTX 2080 Super graphics card, which is arguably the most powerful combination you can currently find in a gaming laptop.

If that’s still not powerful enough for you, Asus also offers a Turbo boost mode, which allows dynamic TDP boosting between the CPU and GPU to squeeze out every last drop of performance power. The temperature and fan noise are increased in this mode, but you get a noticeably better performance in return. We used this mode when benchmarking the Zephyrus Duo.

As you can imagine, the benchmark data is outstanding. This is comfortably one of the most powerful gaming laptops I’ve ever reviewed, beaten only by similarly priced systems such as the Acer Predator Helios 700 and Alienware Area 51m.

In terms of actual gaming performance, the Zephyrus Duo was capable of hitting the golden 60fps mark in Full HD for even the most demanding titles. It was even able to run Shadow of the Tomb Raider at 83fps, and saw the frame rate soar up to 145fps when playing older titles such as Dirt Rally.

For modern titles running in 4K, the Zephyrus Duo was stuck around 30fps. This is certainly still playable, but may well look a bit choppy for those used to smooth motion. This also shows why Asus didn’t bother upgrading the refresh rate beyond 60Hz for the 4K configuration.

Since it’s equipped with an RTX graphics card, you also get access to fancy features such as ray tracing and DLSS. Recent reports have suggested the performance for the likes of Death Stranding have been significantly improved with DLSS, so it’s certainly not a feature to sniff at.

Be warned though, even when running in Silent mode or the default Performance mode, the Zephyrus Duo can get very hot. I tried to play Crusader Kings 2 (a very low intensive title graphically) with the laptop on my lap, and my knees were met with a scorching blast of hot air. This is definitely a laptop that should ideally stick to desks.

Fan noise is pretty loud when playing too, but not to any sort of decibel unexpected with such a high-spec system.

In terms of storage, the Zephyrus Duo sees up to a huge 2TB capacity, which should easily be enough to store all of your favourite games. And by supporting RAID 0, the SSD boasts scintillating read and write speeds at 3494 MB/s and 3356 MB/s respectively. This means the Zephyrus Duo is speedier than most laptops for saving and loading data to/from the drive.

Having a powerful graphics card and a 4K display is a recipe for disaster when battery life is concerned, so it’s not too surprising to see the Zephyrus Duo struggle in the battery benchmark tests.

After reducing the brightness down to 150 nits and simulating typical office tasks via PCMark 10, the Zephyrus Duo only managed to last for 1 hour and 16 minutes. That’s pitiful. 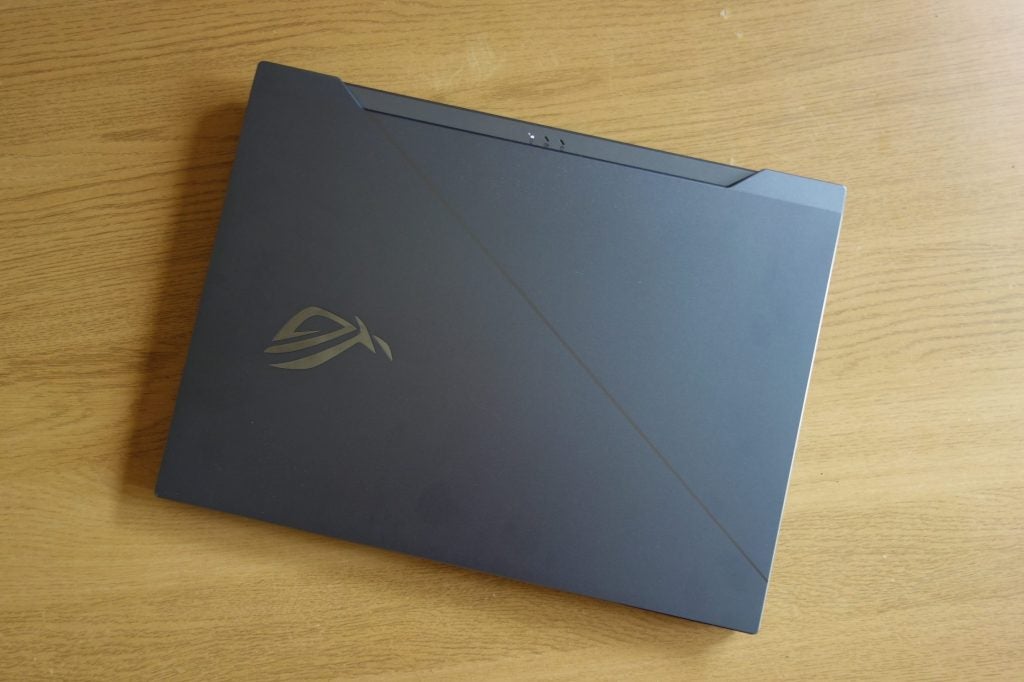 To make the test more fair, I repeated the test with the display settings dialled back down to 1080p. This saw the laptop survive 2 hours and 54 minutes – a result that is more in line with other gaming laptops, but still questions its portability credentials.

If you were to play games on the Zephyrus Duo while unplugged, battery life would suffer even more. With that in mind, I recommend you keep the laptop plugged into the mains where possible, especially since it’s required to enable Turbo mode.

Should you buy the Asus ROG Zephyrus Duo?

It’s difficult to recommend the Asus ROG Zephyrus Duo to your average gamer with it costing beyond £3000, especially since the Alienware Area 51M is priced competitively yet boasts a better performance and keyboard.

You’ll really need to make use of that unique ScreenPad to get your money’s worth here, and while I did find it useful for web-browser multitasking when gaming, there’s very little it can offer gamers that your smartphone isn’t already capable of.

If you’re a video game streamer then the Zephyrus Duo becomes a lot more appealing. Being able to stick the likes of broadcasting settings and chat messages to the lower screen could be very useful. Having the extra screen space will be invaluable when editing video too.

Factor in the high-end specs and the professional-grade 4K screen, and the Asus ROG Zephyrus Duo is easily one of the very best portable options for professional video game streamers and content creators. Although it’s worth considering whether you’re better off with a more affordable desktop gaming PC setup instead.