Incredible quality, 200Hz G-Sync, top-notch HDR and a 35-inch widescreen. It's expensive, but the PG35VQ delivers a near-perfect gaming experience.

The Asus ROG Swift PG35VQ is one of the most exciting and keenly anticipated gaming monitors to ever be released. This high-end unit was first announced way back in 2017, and it’s taken more than two years for this beast to finally arrive.

What took so long? Well, for starters, there’s the specification: this panel is a curved widescreen with a 3440 x 1440 resolution, Nvidia G-Sync Ultimate, DisplayHDR 1000 compatibility and a vast 200Hz overclocked refresh rate.

Given all of that hardware, it’s no surprise this screen took so long. It’s also no surprise it’s ruinously expensive – depending on what side of the Atlantic you’re on, it’ll set you back £2685 or $2500.

There are few gaming monitors that can match the ROG Swift PG35VQ’s feature set. The first place to start is G-Sync Ultimate – Nvidia’s best syncing technology.

The ROG Swift PG35VQ’s G-Sync is clocked to run with a default refresh rate of 180Hz, which is better than most of the other monitors in the market – and it can be overclocked to run at 200Hz. That’s huge speed; enough to make e-sports titles and single-player games look incredibly smooth.

Displays with G-Sync Ultimate have all of the usual trappings of Nvidia’s syncing service, but they also provide 1000 nits of backlight strength, which means they can sync while producing top-notch HDR images. 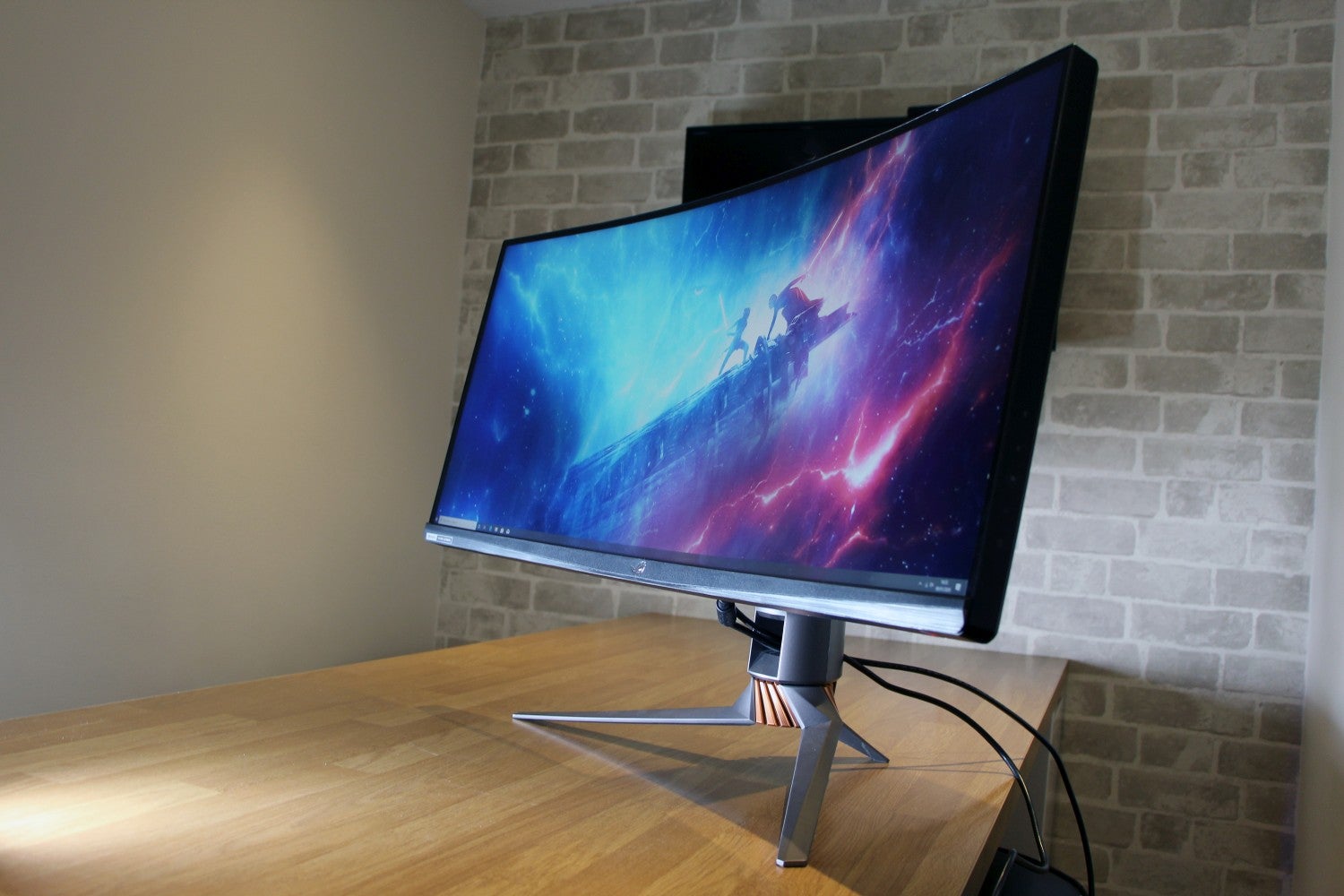 To that end, the G-Sync Ultimate screen also supports DisplayHDR 1000. It’s one of the top HDR standards on the market, and it demands a peak brightness of 1000 nits, a wider colour gamut than sRGB, zone-level dimming, a 0.05 nits black level and a consistent brightness level of 600 nits. That’s miles beyond the DisplayHDR 400 and 600 standards used on cheaper screens.

The Asus screen has Full-Array Local Dimming too, and it’s spread across 512 zones – a huge figure that outstrips most other gaming screens. It gives the screen loads of granular control over black levels, and it means you’ll get deeper, more nuanced blacks than panels with edge-lit technologies.

These incredible features are underpinned by a VA display. It has a 34-inch diagonal and a widescreen resolution of 3440 x 1440 along with a gentle 1800R curve. The screen has a rapid 2ms response time, which is great for any scenario, including e-sports.

The widescreen form factor and high pixel count both work wonders for gaming – the density level of 107ppi is reasonably sharp, and the sheer size of this panel helps make games more immersive. 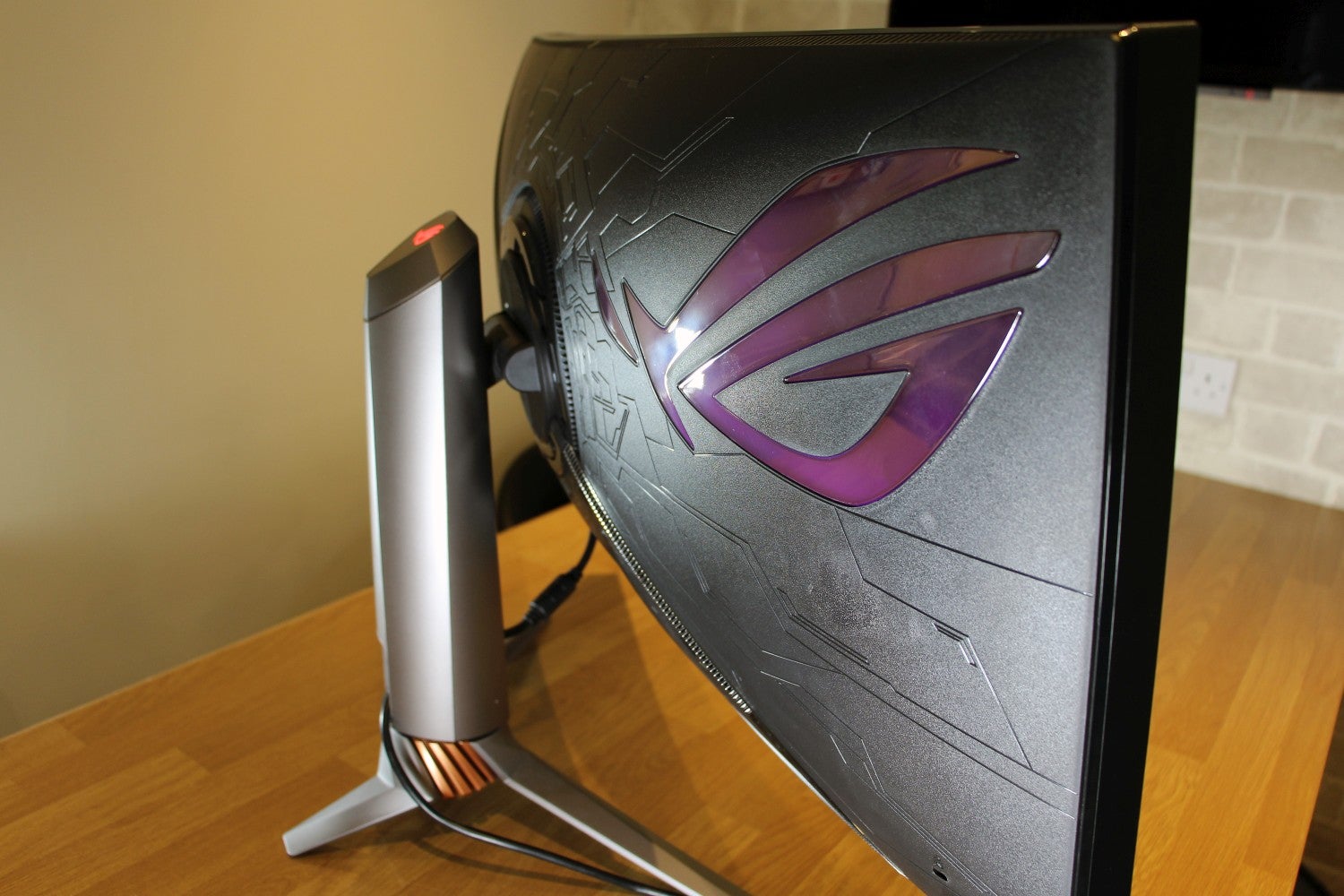 The size, resolution, rapid G-Sync and high-end HDR implementation make gaming on this screen a joy. The 180Hz and 200Hz refresh rates are incredibly smooth, and overclocking the screen delivered only a tiny, barely-noticeable bit of blur that will not impact gaming in any real way. And, if you are bothered by that, 180Hz operation is flawless on this screen and still extremely fast.

Activating HDR on this panel is a revelation. Colours are punchy and vibrant, with huge brightness and incredible depth. Games look like they’re on another level with this high-end HDR implementation – it’s more of a transformation than you’ll find on most other gaming panels.

Playing HDR games on this screen didn’t cause any ghosting issues. There is some minor haloing around the mouse cursor in Windows, but that’s a tiny complaint. 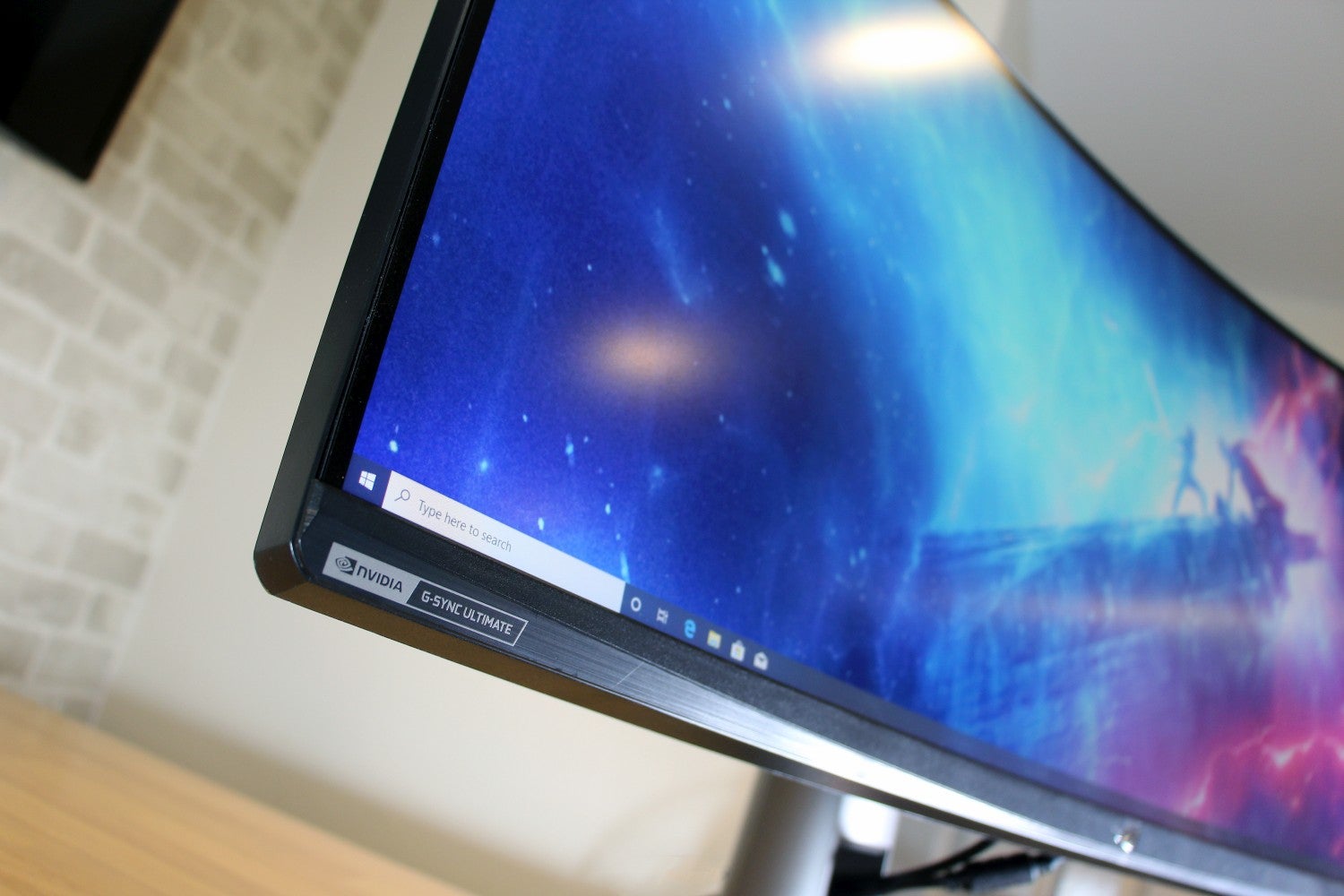 Despite the superb performance, the expensive ROG Swift PG35VQ has caveats. The resolution and refresh rate mean you’re going to need a beefy GPU to run this panel. If you want to play e-sports titles or single-player games at 144fps, 180fps or beyond, then you’ll want an RTX 2070 Super or an RTX 2080 Super.

The switch between 8-bit and 10-bit colour is not a big deal for gaming – the difference just isn’t noticeable. However, it’s worth mentioning this in case anyone is expecting absolute perfection from the expensive ROG Swift PG35VQ.

The PG35VQ looks like a typical Republic of Gamers product – it’s big and bold. The stand is wide and angular, with thin metal legs and orange accents. The base has RGB LEDs that flare onto your desk, and the rear has a huge ROG logo with more lighting alongside eye-catching patterns. And, as usual, the lighting can be customised with Asus Aura Sync, and synchronised with other hardware.

The bold design is paired with good build quality – the PG35VQ is rock-solid. However, there’s no denying this 35in widescreen is a heavyweight; it weighs 13.6kg, and it’s 833mm wide and 306mm deep. The thin legs help make it easier to fit this screen onto your desk, but you’re going to need a solid surface. 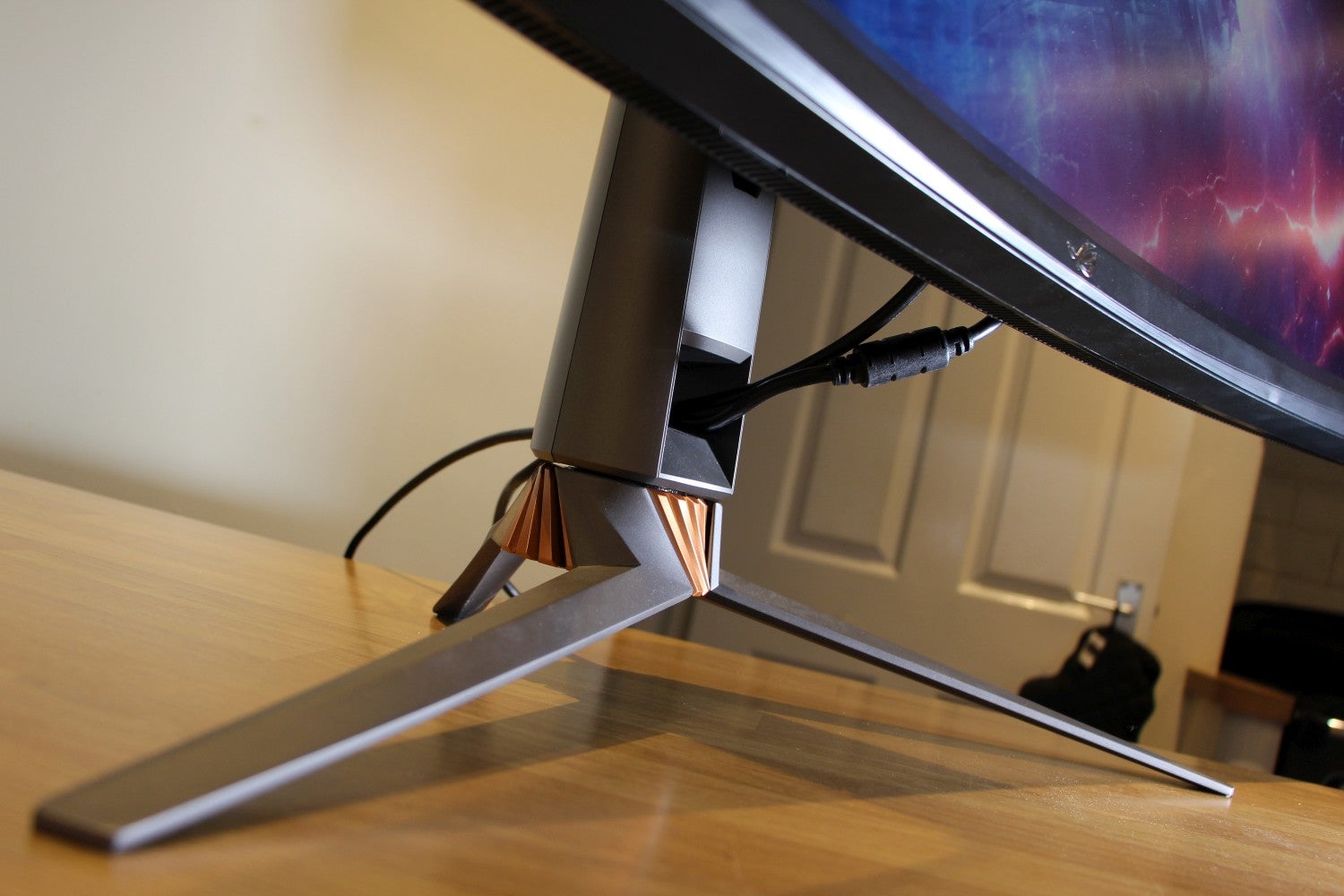 The ROG Swift PG35VQ comes ready-assembled, which helps, and offers reasonable versatility – 100mm of height adjustment, 35 degrees of swivel and 25 degrees of tilt. That’s decent for a large, curved widescreen, but 16:9 screens tend to offer more in every department, including portrait orientation.

The ROG Swift PG35VQ has a surprisingly middling port selection. The sole DisplayPort 1.4 connection offers less bandwidth than DisplayPort 2.0. There’s one HDMI port and two USB 3.0 ports, but no USB 3.1 and no Type-C. Annoyingly, none of those USB ports are on the side of the panel – they’re around the back and difficult to access.

The Asus on-screen display is managed by the usual joystick and row of vertical buttons behind the bottom-right corner of the panel. They’re large and sturdy, with a light and consistent action that makes it easy to skip through settings. 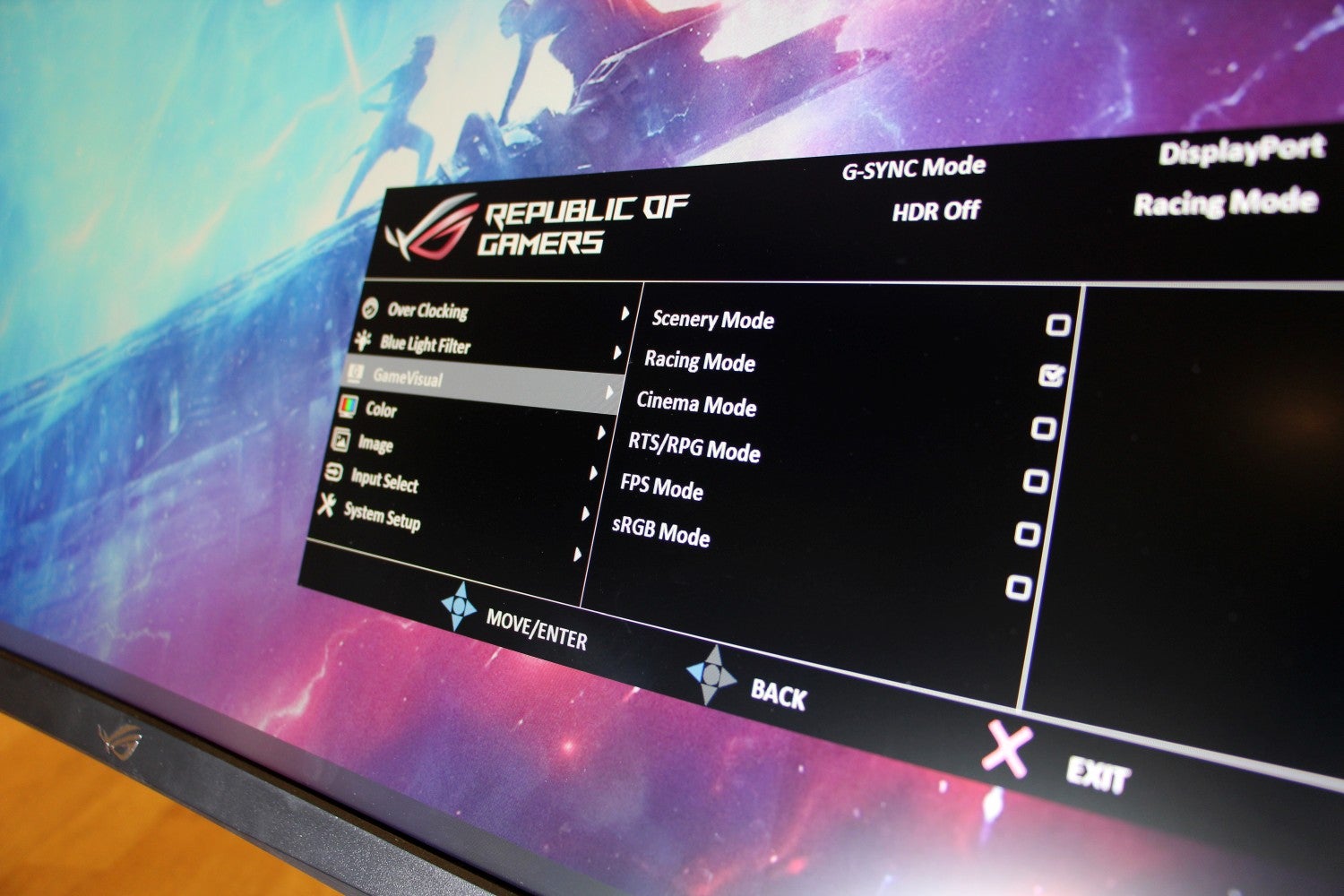 It’s a sharp, smart OSD, with upgraded graphics when compared to older models. The OSD always displays the screen’s G-Sync, HDR and screen mode statuses, which is handy, and the menu is packed with options, from HDR and refresh rate tweaks to variable backlighting, gamma levels and different gamut settings. The menu can also be moved around the screen.

There are plenty of options here, certainly more than you’ll get on most gaming panels. The quick-access buttons also serve up crosshairs, timers, FPS counters and audio settings.

There are no speakers on this screen, presumably because Asus assumes that gamers who are spending this much cash will already have their own audio hardware.

At factory settings the PG35VQ delivers a brightness level of 353 nits, which is ample for mainstream gaming. That’s joined by a stunning black point of 0.13 nits, and those figures combine for a measured contrast ratio of 2,715:1. That’s spectacular – higher than Asus’ claimed 2,500:1 figure, and high enough to deliver incredible vibrancy, depth and punch when gaming using the conventional sRGB gamut.

Halving the factory brightness saw the contrast levels maintained, while ramping the screen up to maximum brightness raised the backlight to a vast 570 nits and kept contrast consistent. 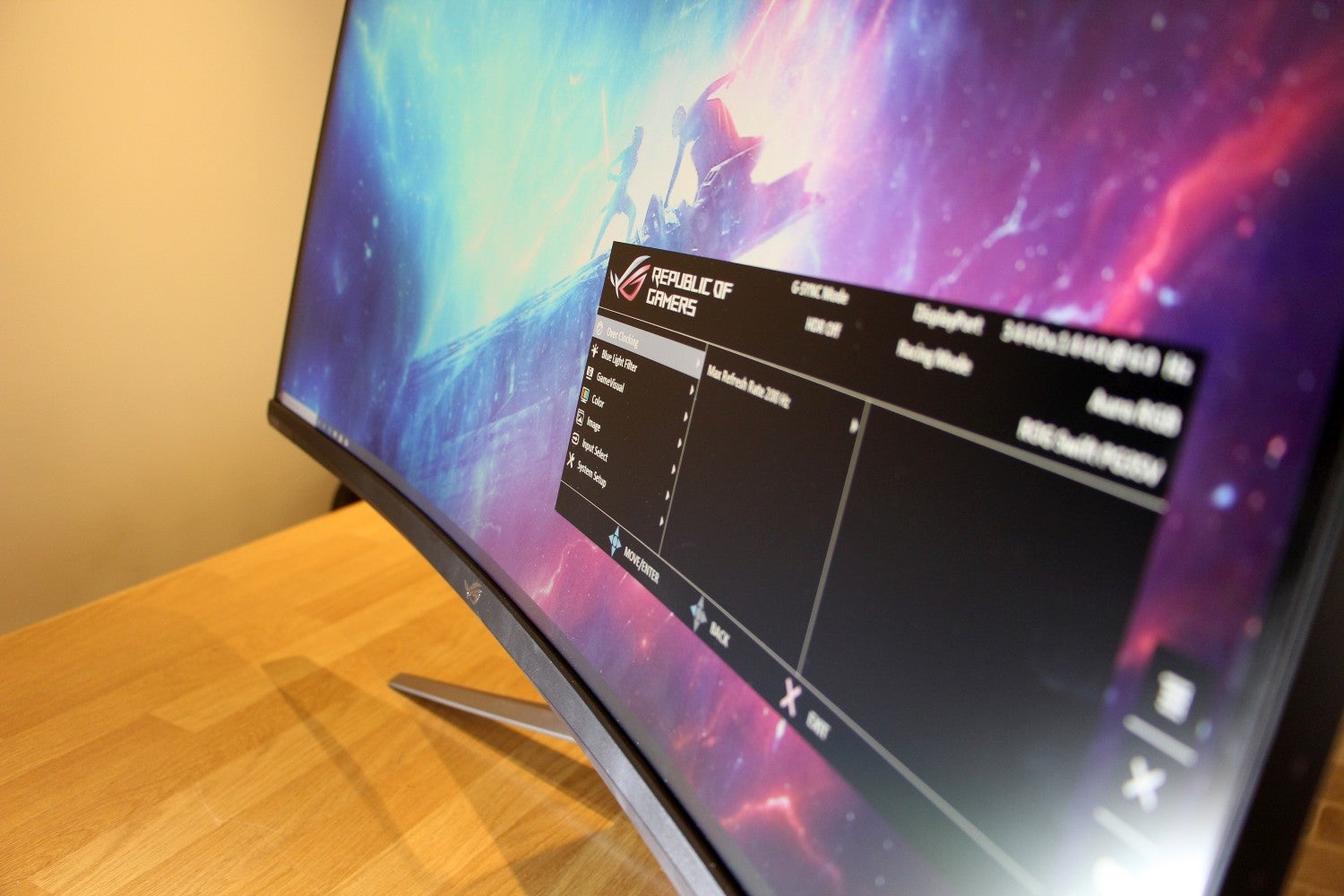 Activating HDR mode sees the ROG Swift PG35VQ deliver the 1000-nit burst brightness level that its DisplayHDR 1000 standard demands, and the black level reduces too, so I have no qualms about this panel meeting its HDR obligations.

The ROG Swift PG35VQ has superb colours. At factory settings the average Delta E of 1.49 is below the point where human eyes detect issues, and the colour temperature of 6328K is very good, and close to the 6500K ideal. The gamma level of 2.32 is also good. 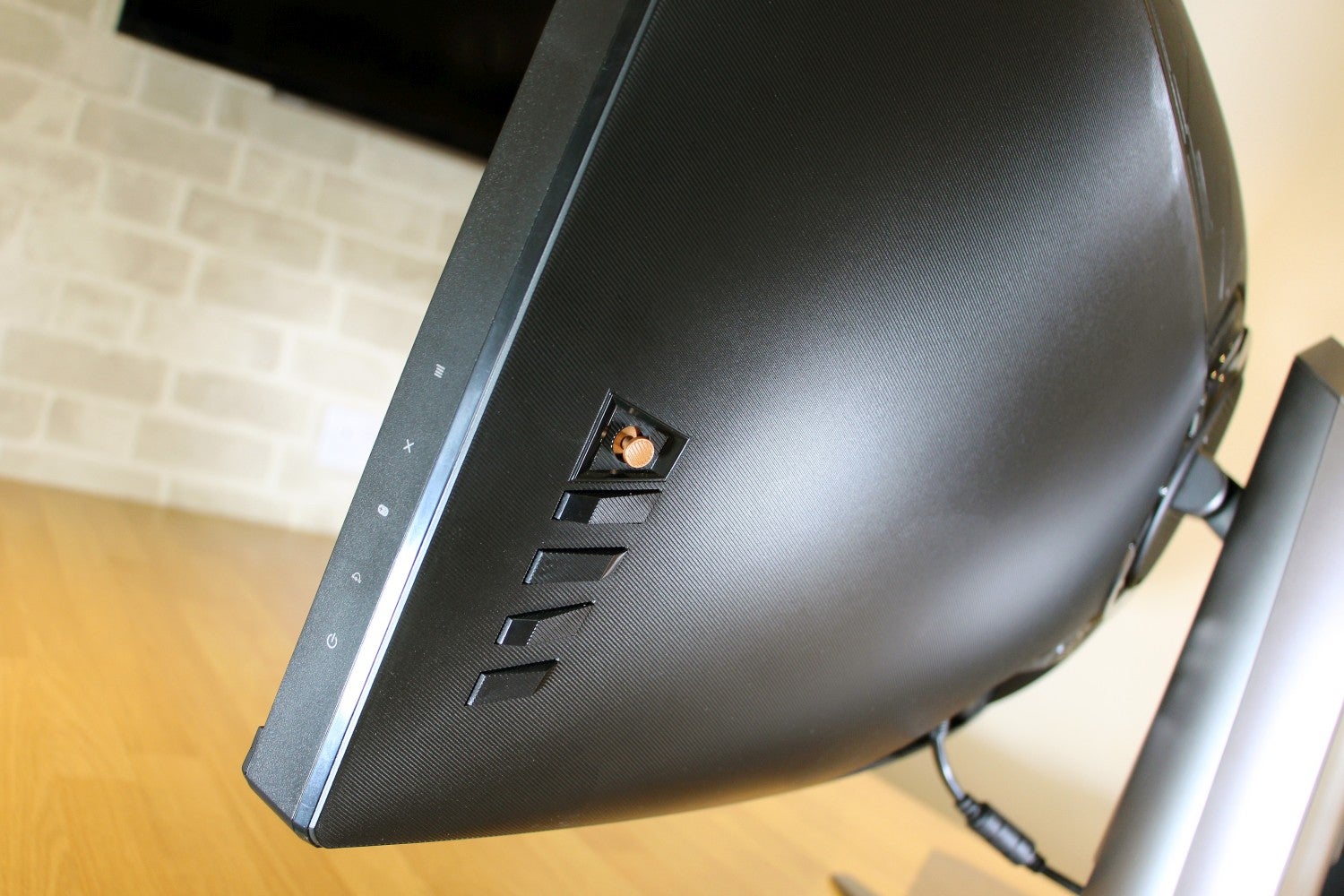 The ROG Swift PG35VQ rendered 98.7% of the sRGB colour gamut, which is great for mainstream gaming. In its normal screen modes, it rendered a mediocre 72.4% of the DCI-P3 colour gamut, which is required for HDR. That’s too low for HDR, but activating the panel’s wide-gamut mode saw the DCI-P3 coverage figure leap up to 88.8%. That’s almost level with Asus’ claimed 90% figure, and it’s easily high enough for HDR gaming.

The PG35VQ has a solid input lag figure of just 4.9ms – a figure that’s easily good enough for e-sports. It has good uniformity too, especially for a screen of this size: the panel lost up to 14% of its backlight strength in the corners but that’s better than most curved widescreens and won’t be noticeable during games.

The Asus even manages to deliver good quality in some of its alternative screen modes. The FPS option has a 1.19 Delta E and maintains the contrast figures from factory settings, and this pattern was repeated in the sRGB and scenery options. 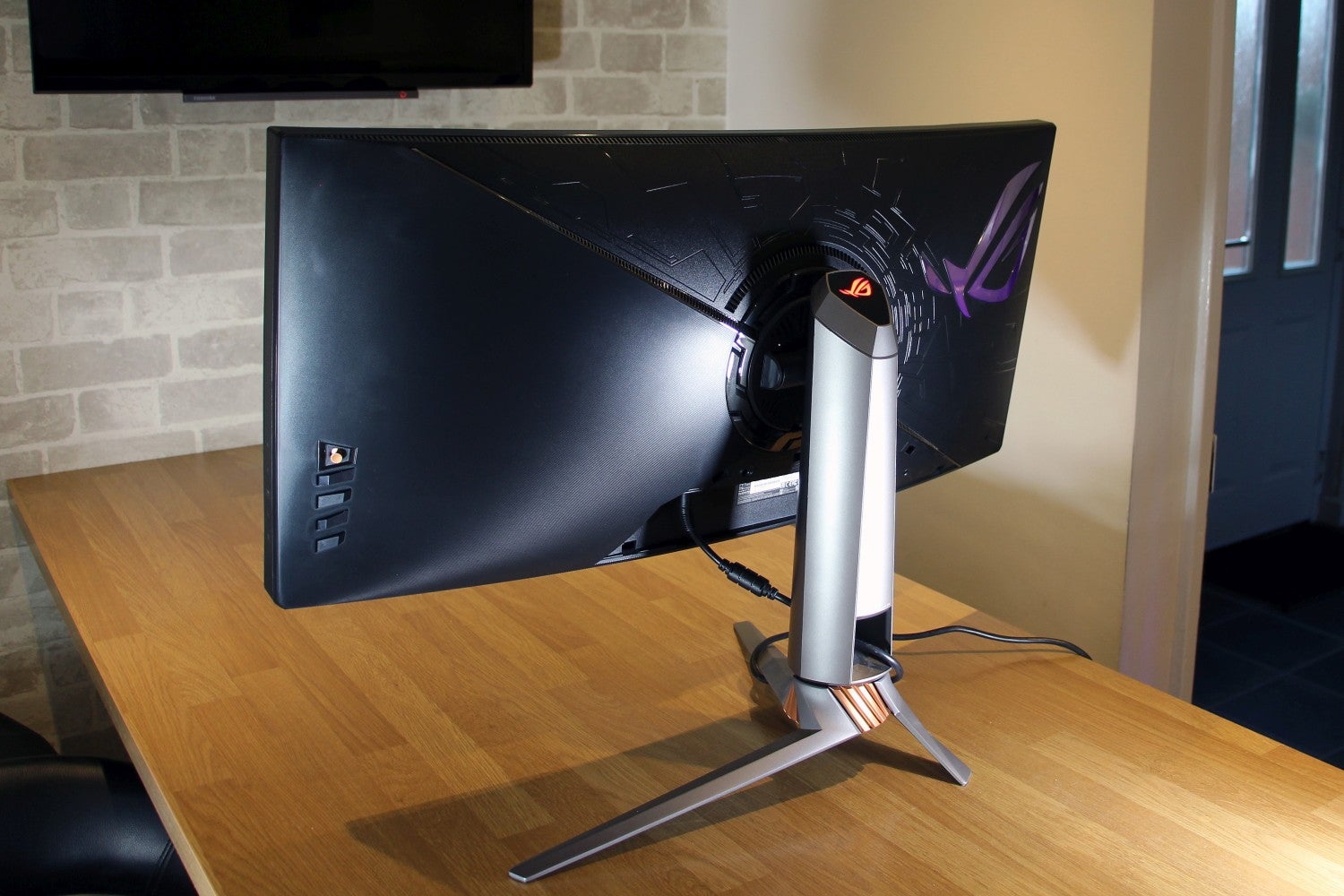 The Cinema mode is only average, with Delta E figures that are slightly poorer than the screen’s factory settings and a colour temperature of 6863K, which is a little cooler. The RTS/RPG mode is disappointing though, thanks to a Delta E of 2.64. There’s also no MOBA mode on this screen.

Also bear in mind that the sheer amount of tech inside this screen means a fan is installed to keep the hardware cool. It’s quiet, but it’s always running and its high-pitched whine is noticeable in quieter environments.

Should you buy the Asus ROG Swift PG35VQ?

The Asus ROG Swift PG35VQ is an incredible gaming monitor – undoubtedly one of the best that’s ever been built.

Its feature set is sensational. The inclusion of 200Hz G-Sync makes gaming butter-smooth, and DisplayHDR 1000 makes games look vivid, with incredible colours and depth. The curved widescreen is crisp and immersive, and core image quality is great, with top-notch colours and contrast.

Despite the huge price, the ROG Swift PG35VQ doesn’t have a clean bill of health. The port selection is mediocre, and a bit more bandwidth could have allowed 10-bit colour to work at a wider range of refresh rates. There are no speakers, and there’s slight fan noise. Overclocking the screen delivered a tiny bit of extra blurring, and HDR mode saw the cursor a little haloed in Windows.

They’re tiny niggles, and they won’t really have any negative impact during gaming, even if they’re worth pointing out just because of this panel’s sheer price.

That price, of course, is vast: at £2,685 and $2,500, this is one of the most expensive gaming monitors on the market. That puts this panel out of reach of most gamers and into the arms of people who have the cash to pay for a near-flawless experience. But, if you do have that cash, this is as close to gaming perfection as you can get right now.

The 200Hz G-Sync, DisplayHDR 1000 options and curved widescreen design makes this panel a gaming sensation, with fast, smooth motion and bold, vibrant colours. It looks superb too, and has great core image quality. It’s ruinously expensive, though, and still has a couple of tiny issues – so it’s close to perfection, but not quite there yet.