The Asus ROG Strix XG17 looks like an excellent companion monitor, whether you’re playing on a laptop, your phone, or the Nintendo Switch. A top refresh rate of 240Hz might be overkill in some scenarios (especially for the Switch), but the thin, foldable frame and three hour battery means that the XG17 could be the ultimate travel buddy – shame about the fiddly OSD.

The Asus ROG Strix XG17 is a portable monitor with a super-high top refresh rate of 240Hz. Designed primarily for gaming, the ROG Strix XG17 is a stylish and snappy companion piece, models of which Asus gamely had hooked up to a Nintendo Switch and gaming laptops at Computex 2019.

While it’s first and foremost a gaming monitor – it’s being sold under the Republic of Gamers tag – the ROG Strix XG17 could also easily double as a productivity aid.

You could, in a pinch, use the ROG Strix XG17 for work, if you wanted an entire second monitor dedicated to Tweetdeck, or Excel. 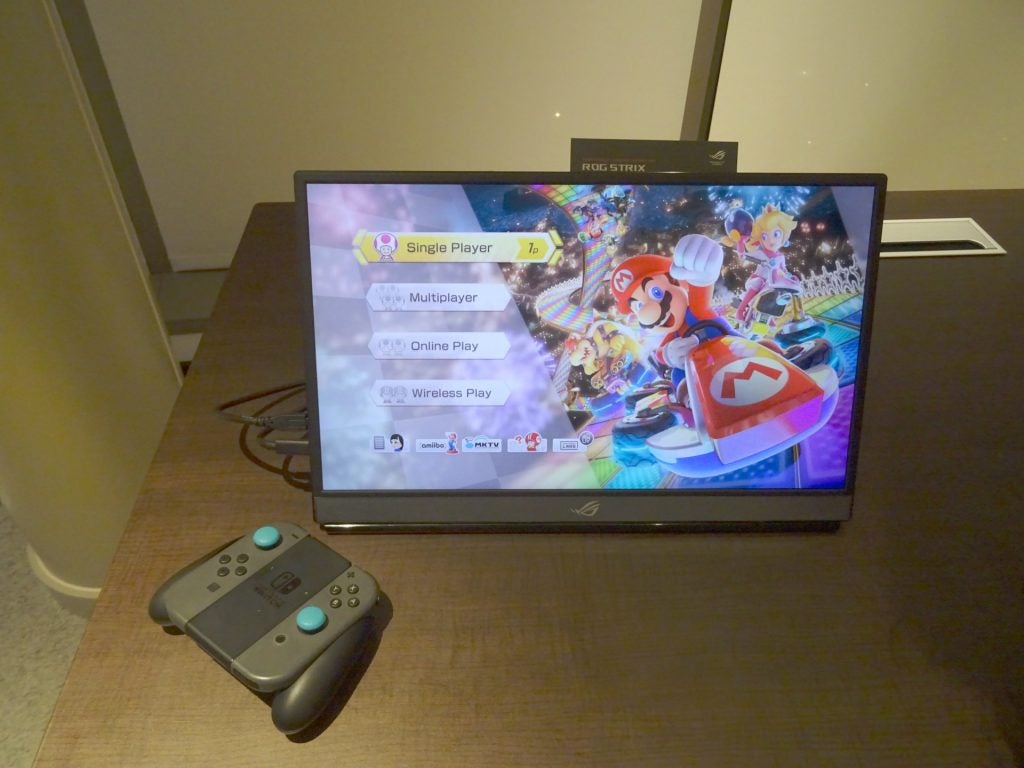 Asus has yet to confirm pricing for the XG17. Portable Full HD monitors such as the AOC I1601FWUX and Asus’ own ZenScreen MB16AC cost in the region of £150-£250.

Since the ROG Strix XG17 boasts a higher-than-usual refresh rate, we can expect it to command a little more than the above – but Asus may yet surprise with a competitive RRP.

Likewise, Asus has been tight-lipped about solid release dates, although we’ve heard that the ROG Strix XG17 could be available “about a month from now” – so June 2019, if we’re lucky. We’ll update this section once we have confirmation. 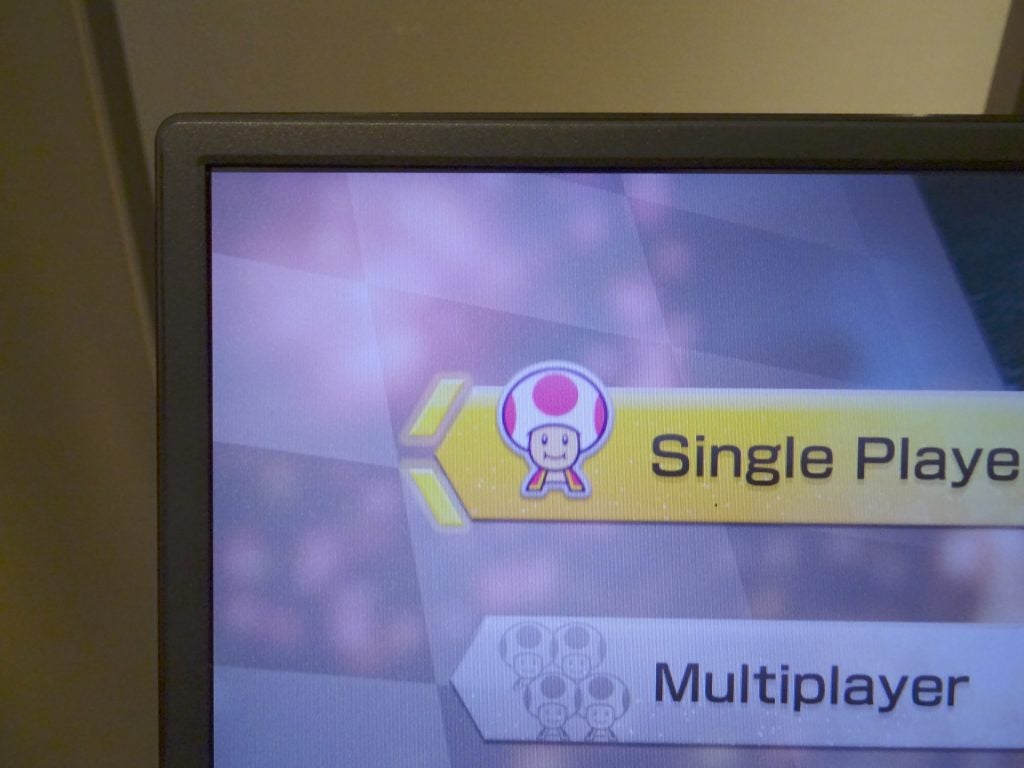 What is the Asus ROG Strix XG17?

While portable monitors are nothing new, the above specs are uncommon and bar-raising. Mario Kart 8 Deluxe looked particularly impressive, making me consider whether  I should pick up a ROG Strix XG17 purely so I can play Switch games on such a screen during long train journeys.

Even if I wasn’t lucky enough to have a train seat with a mains socket to hand, the ROG Strix XG17 has an internal battery – which, on paper, provides around three hours of power with the screen refreshing at 240Hz. No doubt if you’re playing a less demanding title such as Mario Kart then it will run for a bit longer.

QuickCharge 3.0 and Power Delivery 3.0 support quick charging over the Type-C USB port, so you could in theory have a power bank handy for keeping this monitor topped up if you’re away from the mains. 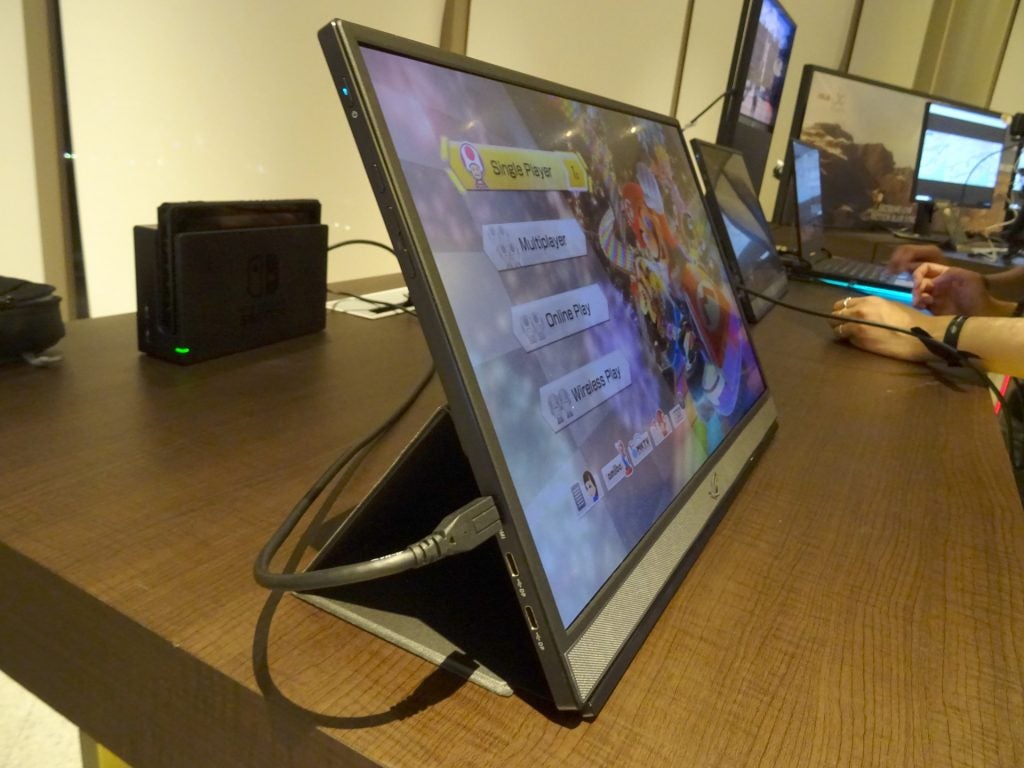 There’s a micro-HDMI port, for when you want to hook up a gaming laptop, or anything else capable of high refresh rate gaming. The ROG Strix XG17 also supports adaptive sync technology – although, at the time of writing, no-one could tell me if this meant Nvidia G-Sync, AMD FreeSync, or both.

An attractive use case for the ROG Strix XG17 is that it can be set up as the primary display for gaming. Asus had The Division 2 running on a ROG Zephyrus S GX502, with the main game action output on the ROG Strix XG17, and a mini map and Discord on the laptop’s screen.

That’s an interesting arrangement; typically, you’d have the portable display as your secondary screen. This might be Asus’ way of hinting that the XG17 is good enough to run in tandem with your gaming laptop – the ROG Zephyrus S GX502 will be available in 140Hz and 240Hz options. 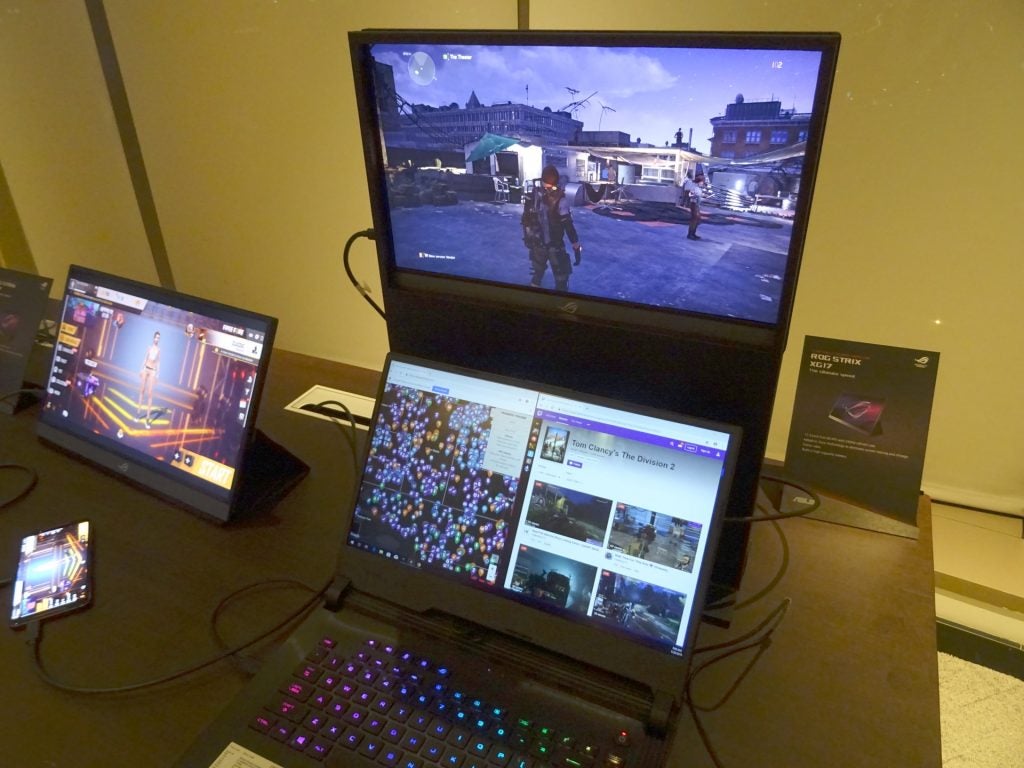 Overall, I’m super-impressed with the ROG Strix XG17. If I had to nitpick, I’d find fault with the on-screen display. It’s a fiddly system where you have to use directional buttons together with the power key to cycle through menu options. All displays, no matter their size, should aspire to offer an elegant solutions such as the Samsung Space Monitor’s five way key. Otherwise, the ROG Strix XG17 looks excellent, and I can’t wait to test it.

Hopefully, price and release dates for the ROG Strix XG17 will be confirmed soon.