The X470-F Gaming gives great gaming performance for a reasonable price; not one for petrol-heads, mind.

What is the Asus ROG Strix X470-F Gaming?

The X470-F Gaming is the cheaper of the two Asus products in this latest motherboard roundup, but it will set you back £185 – and that means it’s still one of the pricier options here.

The ROG Strix board has all of the key features you’d need of a powerful gaming rig. Its top two PCI-E x16 slots are steel-supported, and can handle two Nvidia cards and three AMD cards – a complement that matches pricier boards, with almost nothing handling 4-way multi-GPU these days.

The memory slots can accept the same 64GB of DDR4 memory as rivals (you get two M.2 slots), with one protected by an extension on the southbridge heatsink. However, bear in mind that only one of those connectors actually supports the faster NVMe interface; the second relies on slower SATA connectivity.

The ASRock X470 Taichi, which costs £210, is a rare board to offer support for quad graphics, but it can’t run DDR4 memory at quite the same speed as the Asus board. It tops out at 3,466MHz, while the Asus board serves up 3,600MHz DDR4. 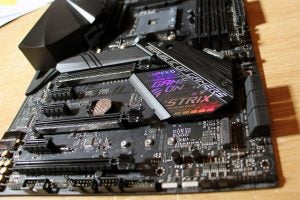 Elsewhere, the Asus provides GameFirst Gigabit Ethernet and the same SupremeFX audio included on the firm’s pricier boards, although the latter feature isn’t shielded like it is on the premium models. The Asus also includes six SATA ports. That’s fine, although the ASRock does have eight SATA connectors – handy for loads of storage.

Get into the nitty-gritty, though, and you’ll begin to notice that some features are lacking from this board. You get a row of diagnostic LEDs, but there’s no POST display, power button or reset option. The ASRock Taichi board does have a POST display, at least.

You get one RGB AURA header, two RGB LED headers and three more fan connectors. There are also two jumpers for connecting water-cooling kit. It’s a solid bill of health and will prove adequate for the vast majority of machines, but the pricier Asus board does offer more here. The ASRock has fewer lighting connectors.

Design-wise, the X470-F looks good, if a little subdued. The main heatsink and I/O shroud is large, but less extravagant than on the Crosshair board. Only this one has RGB LEDs, too – the bottom heatsink is smart and small, but has no illumination.

It’s certainly less eye-catching than the ASRock board, whose top heatsink is far more detailed and angular, and the cog-based design used for the bottom heatsink is one of the most striking on the market.

The Asus’ rear I/O serves up seven USB 3.1 ports and a Type-C connector, but there are no enthusiast-level buttons here. Neither does it have wireless, which the ASRock does include.

The Asus’ branding suggests that the X470-F is a gaming board, and it was a solid performer in benchmarks.

Its 3DMark: Time Spy and Fire Strike results of 4128 and 10,988 are a little ahead of the ASRock board, and only a handful of points behind the pricier Asus ROG Crosshair VII Hero.

In real-world tests, the cheaper Asus board was almost a frame faster than the ASRock in Middle-earth: Shadow of Mordor, and only around a quarter of a frame slower in Rise of the Tomb Raider. It wasn’t far behind the Crosshair here, either.

The Strix’s CPU result of 1407cb in Cinebench beat the ASRock’s score of 1396cb. That Asus score was, in fact, the best result of any board here – albeit by only two points.

In Geekbench, the X470-F scored 4733 and 21,839. Those results are a little more ordinary: the latter score is behind the Taichi, while the former figure is actually one of the slowest scores in the group, albeit by a slim margin. The Asus was one of the best boards here in the Sandra processor arithmetic test.

However, the X470-F returned middling speeds in the NVMe and SATA storage tests, and its memory bandwidth wasn’t particularly good. Its multi-channel result of 32.31GB/sec is a couple of gigabytes behind the ASRock and several other boards. It also proved to be the most power-hungry, with a peak requirement of 140W. 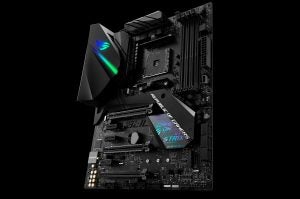 The slim margins in benchmark results won’t make a big impact on day-to-day computing, but they do illustrate that this board isn’t necessarily the best option if you want to rinse every bit of performance from your PC.

Still, the Asus competes well with the ASRock in benchmarks, despite being £15 cheaper. And when it comes to features  the Asus does well – it has a solid basic set of specifications and decent connectivity. It’s missing enthusiast hardware, but so is the ASRock.

The solid performance, broad selection of features and lower price mean I prefer this board to the ASRock. It’s a good option if you want a high-end specification without the enthusiast features – which, ultimately, only a handful of people will likely use.

The Asus ROG Strix board serves up solid gaming performance and a decent specification – and it’s cheaper than its main rival. Performance freaks should note that it isn’t always the fastest board around, however.