The Asus ROG Strix Scar III (G731GU) is an affordable 17.3in laptop that offers well-balanced 1080p and e-sports gaming power. It isn't without some flaws though, with an extremely hefty design, poor battery life and lack of display sync technology. I still wouldn't discount the Scar III, especially if you’re on a tight budget or don’t need RTX 2060 power

The Asus ROG Strix Scar III G731GU is a rare thing these days: an old-school, 17.3in gaming laptop that doesn’t cost an absurd amount of money.

The Asus certainly looks like an old-school gaming laptop. It has per-key RGB LED backlighting and the base of the device has a ring of lights that illuminates the desk.

Much of the laptop is covered in brushed aluminium with a bold, textured design, and the right-hand side features prominent plastic ridges. The base of the screen is angled, and there’s a huge ROG logo on the lid. 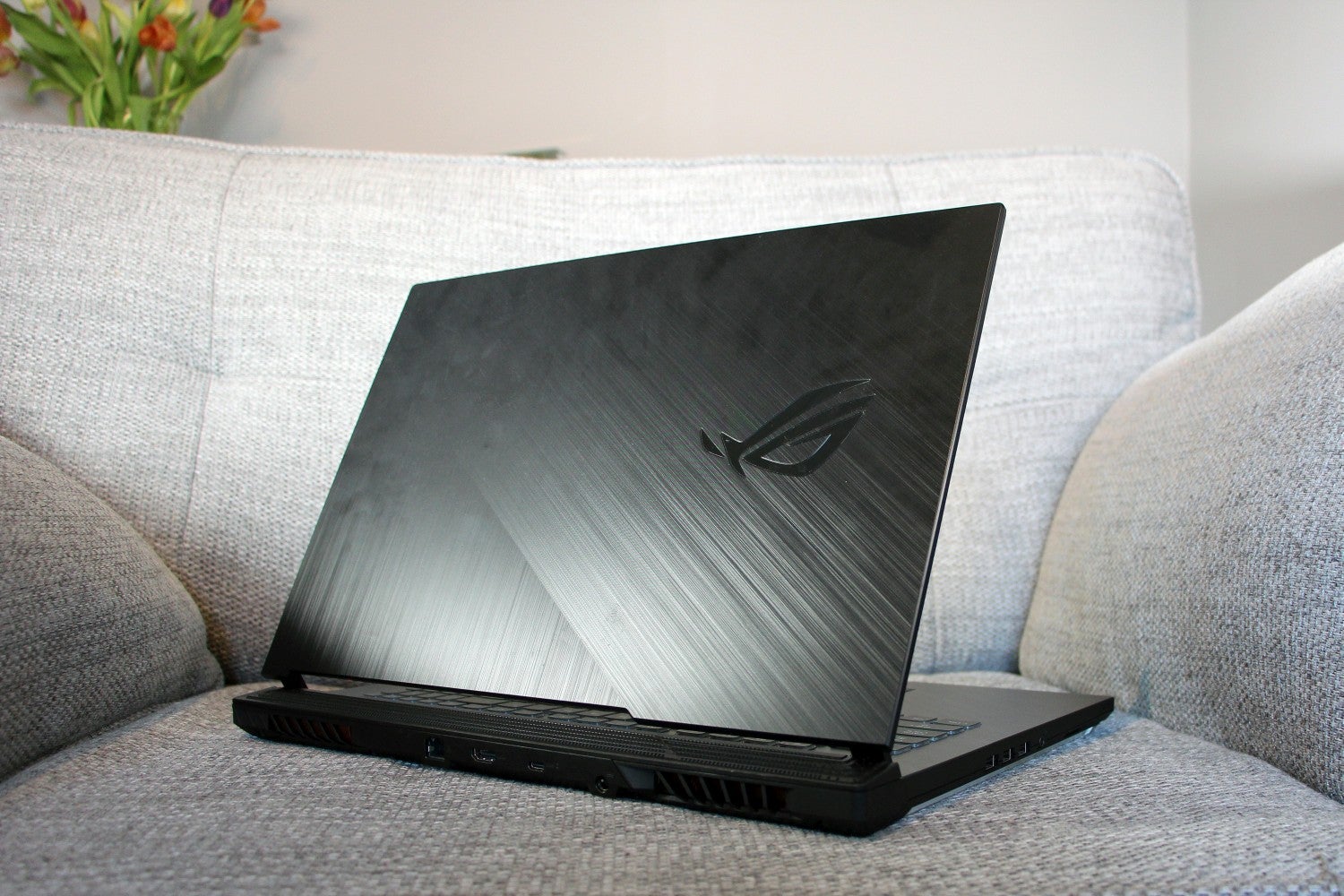 The G731GU looks the part, but the £1399/$1,399 price means there are build quality compromises. The metal around the trackpad moves a little too much, and the plastic underside creaks. I’d certainly recommend investing in a sleeve to protect the Asus in transit. 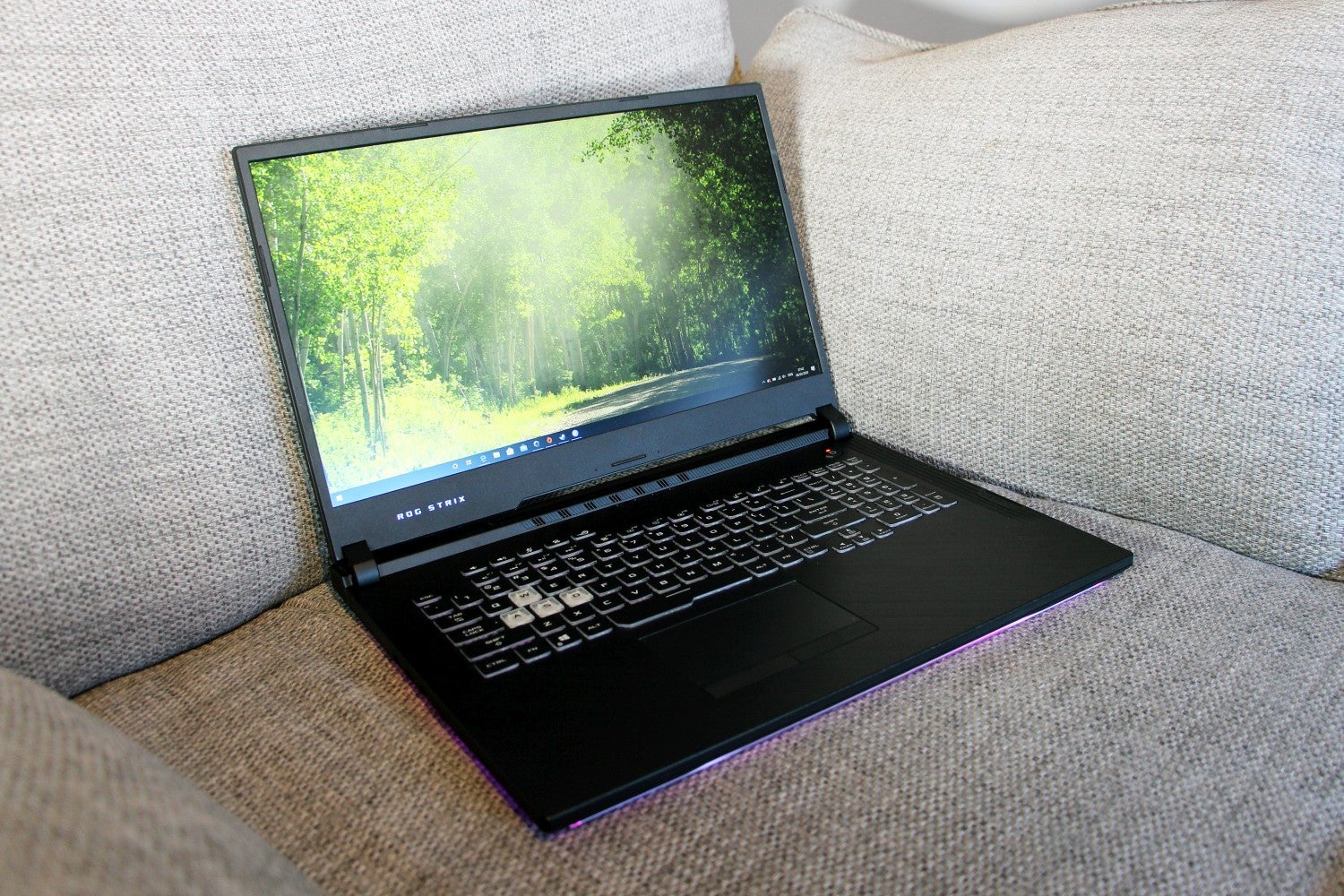 Around the Asus’ edges you’ll find three USB 3.1 ports, a Type-C connection that supports DisplayPort and an HDMI output. However, there’s no card reader, and only one audio jack. Handily, Asus has installed the ports on the rear and along the left-hand edge – so if you’re using a mouse on the right, cables won’t get in the way.

The ROG Strix Scar III has a conventional chiclet keyboard. A full-sized unit with a number pad, it also features an extra row of buttons for opening the Asus Armoury Crate tool and changing fan speeds and speaker volume. The keyboard also has n-key rollover, which is good for frantic gaming.

Its base is sturdy, the buttons have a good amount of travel, and their typing action is reliable and relatively crisp. For mainstream gaming and e-sports, it’s decent. As ever, though, mechanical laptops and keyboards offer greater travel and speed, with more crisp and clinical typing. There remains a gulf in performance between the two, so keener gamers may want to seek out the faster hardware.

The trackpad is mediocre. It could be bigger, and it’s set back from the front of the machine, resulting in the edge of the laptop sometimes digging into your palm. The buttons are soft too. A USB mouse will be more satisfying.

The Scar III has a 1080p panel with a 144Hz refresh rate, but without syncing – and this isn’t unusual for this price.

Despite that, it’s solid: the 1080p resolution ensures games look crisp without overstretching the GPU, and the 144Hz refresh rate means that e-sports titles run at high frame rates while continuing to look smooth.

A brightness figure of 314 nits is high enough to ensure gaming under bright lights or outdoors isn’t an issue, and a black level of 0.19 nits is impressive – it’s lower than most gaming laptops, which means dark areas will have more depth. 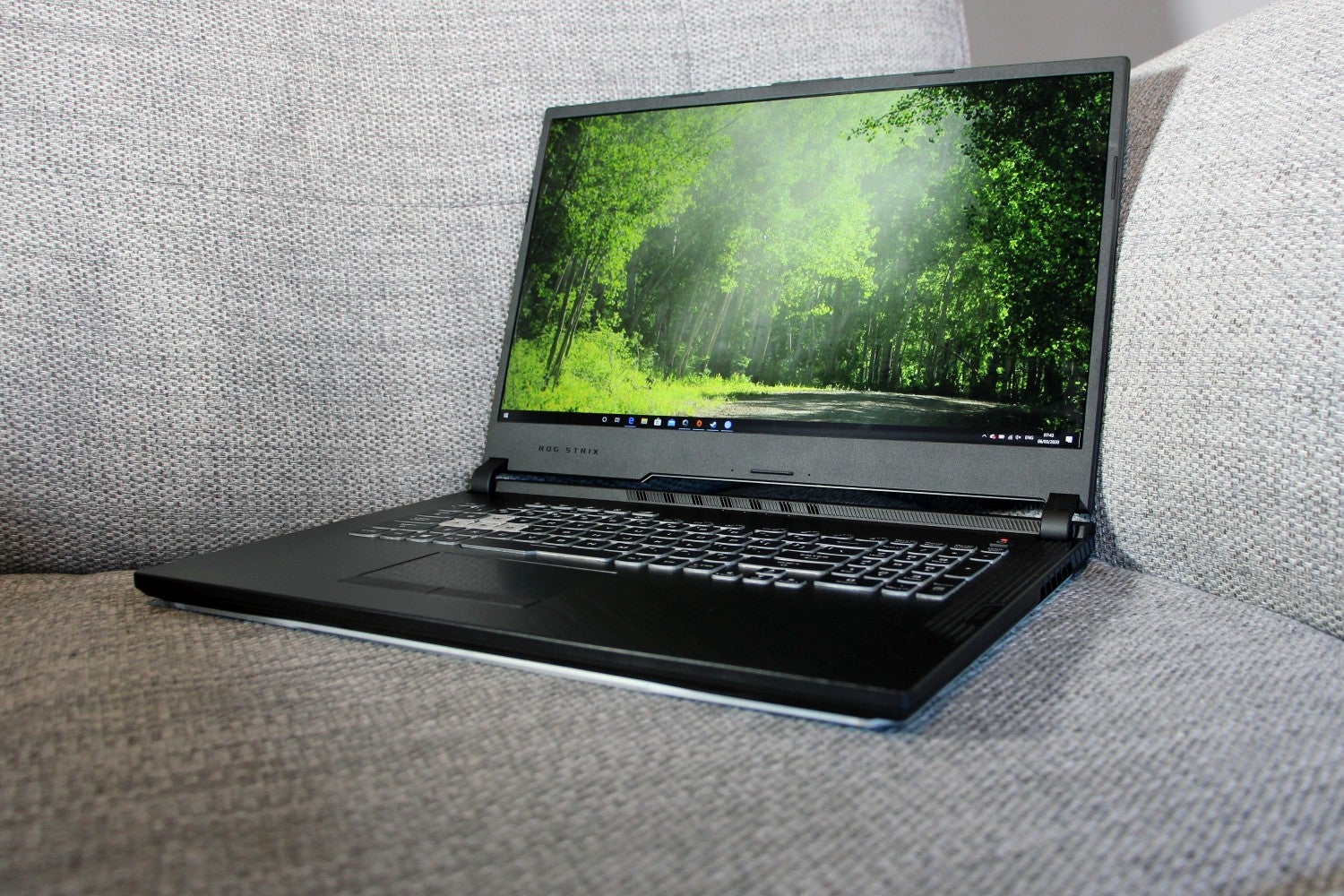 Those initial figures create a contrast ratio of 1652:1 – which is superb. It’s higher than most gaming notebooks, delivering huge vibrancy and depth.

A Delta E of 2.52 is decent; the colour temperature of 7083K is a little chilly, but not so much as to cause issues. The screen is easily good enough for gaming: it offers plenty of punch, and colours are accurate.

The Scar III’s speakers are surprisingly impressive too. They’re loud enough to fill a room; the high-end is crisp rather than tinny, and the treble range is clear and punchy. There’s even a bit of bass on display. A headset will be better for gaming, but this audio kit is easily usable.

The Nvidia GeForce GTX 1660 Ti is a good graphics card for mainstream gaming and e-sports. This laptop’s mobile version has 1536 stream processors and 6GB of memory, and it has base and boost clocks of 1455MHz and 1590MHz – so it’s the full-power version, not the cut-back Max-Q model. 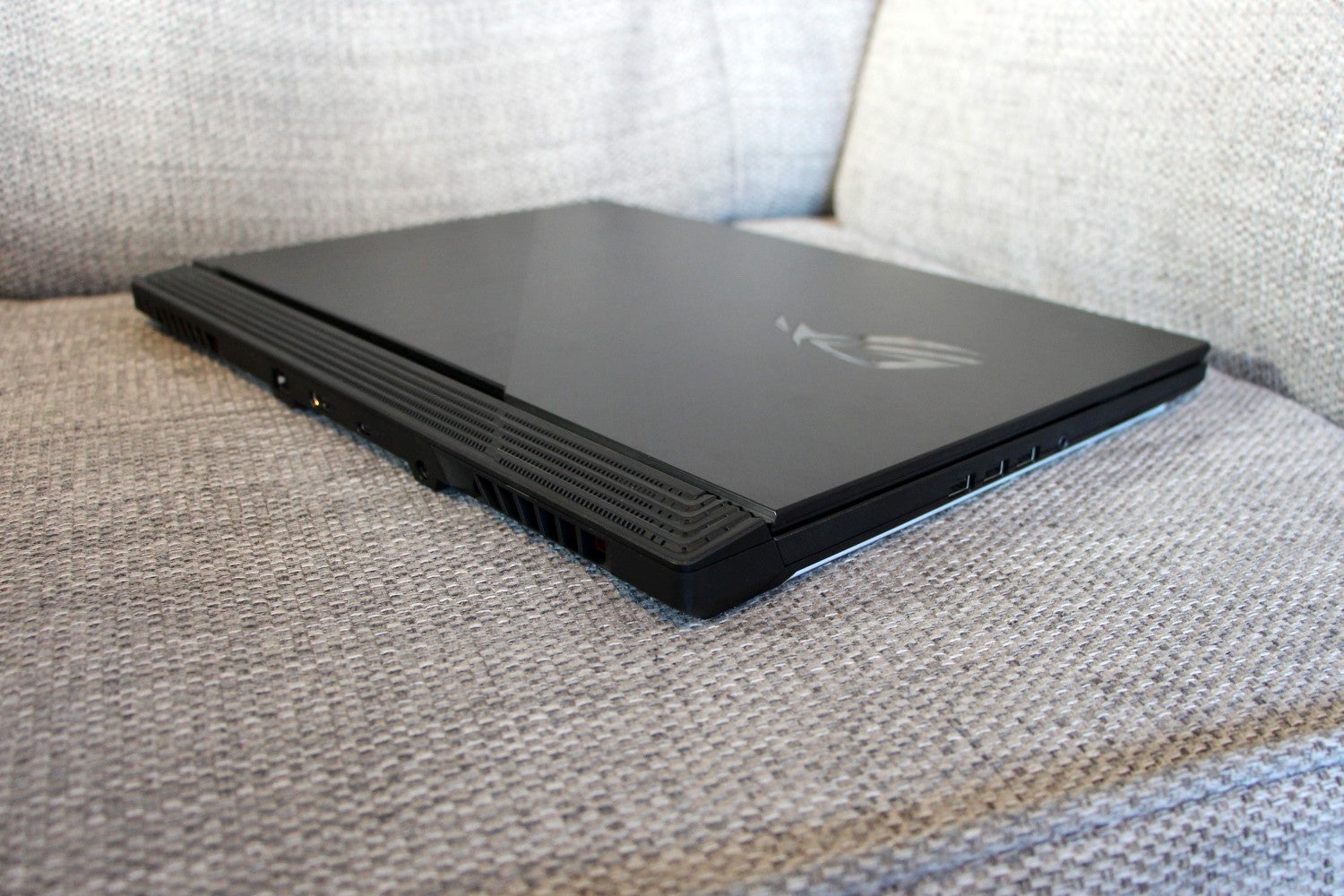 Rounding off the specification is 16GB of 2666MHz dual-channel memory, a 512GB SSD and a 1TB hard disk. Connectivity is handled by dual-band 802.11ac wireless, Bluetooth 5 and Gigabit Ethernet – but there’s no Wi-Fi 6.

By default, the Asus runs in its Performance mode, and there’s easily enough power to handle triple-A games at 1080p. Importantly, any big e-sports game will run at triple-figure frame rates, too – you’ll easily get to the 144fps required to make the most of the screen.

The Core i7 CPU is reliable. In Cinebench R15 the Asus scored 12,564cb, which is a solid result; enough to avoid gaming bottlenecks and to handle day-to-day work. Its PCMark 10 result of 4785 is equally decent.

The only performance downside is the SSD, which delivered read and write speeds of 1261MB/s and 314MB/s. These are mediocre results – better than a hard disk and sufficient to deliver reasonable boot and loading times, but they still come in behind the best drives. The G731GU uses its Performance mode by default, but it also has several other options. Don’t expect much from these, however: the Windows mode didn’t have any impact in CPU benchmarks, with the Asus’ Cinebench score remaining at 1262cb.

Improvement was seen with the Turbo gaming mode: this saw the Asus’ 3DMark: Fire Strike score elevate from 12,840 to 13,241 – but that was only enough to deliver an extra frame or two in games.

This affordable Asus is a middling thermal performer. The fans produce a noticeable whirr, even during relatively undemanding situations, and it’s a little louder in Turbo mode.

The speakers are good enough to mask the output, and a headset will drown it out. But note that this laptop is far from silent.

Don’t expect much battery life, either. The Strix Scar III lasted for just over three hours in a video and web-browsing test, and it ran for an hour during gaming. 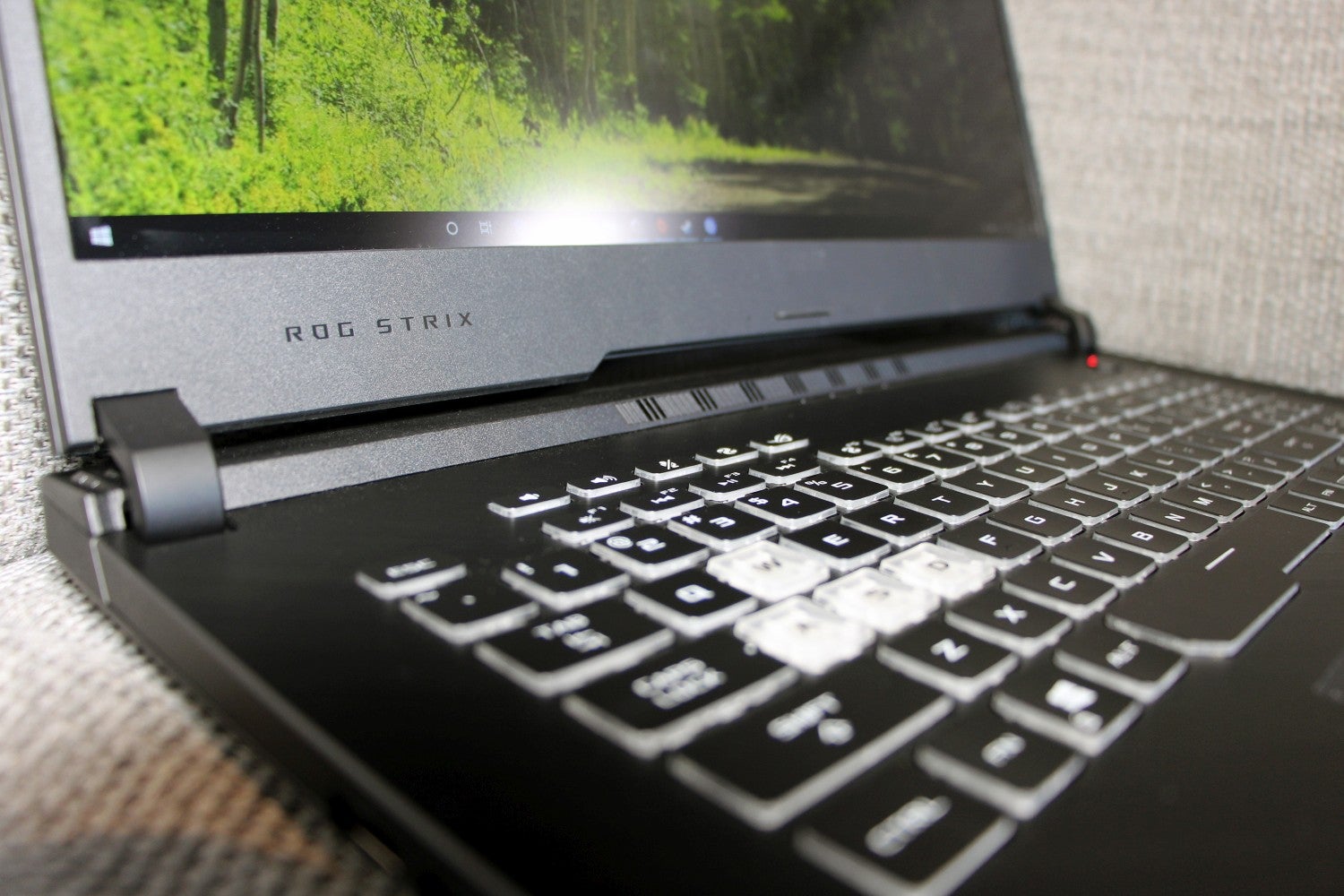 Should you buy the Asus ROG Strix Scar III (G731GU)?

The ROG Strix Scar III is a decent laptop, displaying solid performances in key areas. It has sufficient gaming speed for 1080p titles and e-sports, and the CPU can handle day-to-day computing and mainstream work.

Elsewhere, it has a smooth 144Hz screen offering great contrast and solid colours, alongside a reasonable set of speakers and a decent mainstream gaming keyboard.

The ROG Strix Scar III is affordable, but that has led to compromises. The screen doesn’t sync, battery life is poor, and the design is inconsistent. It can be loud, too. Spending a little more cash will buy you a slimmer, lighter laptop, or one with RTX 2060 graphics.

However, I wouldn’t discount the Scar III, especially if you’re on a tight budget or don’t need RTX 2060 power. The Asus ROG Strix Scar III G731GU is an effective, well-designed gaming laptop that doesn’t cost the earth.