The Asus ROG Strix Go 2.4 is a superb gaming headset for anyone with a Nintendo Switch, PS4, PC or modern Android smartphone. The lack of Bluetooth support is undeniably a pain, but otherwise it's hard to find a flaw. Although it's expensive, the headset justifies its cost by offering superb audio quality, a noise-cancelling microphone and a wealth of bundled accessories

The Asus ROG Strix Go 2.4 is a gaming headset with a fairly unique and useful talent: it works wirelessly with the Nintendo Switch.

Since Nintendo refuses to allow Bluetooth peripherals to work with the Switch, most users have been limited to wired use. The Asus ROG Strix Go 2.4 headset overcomes this headache by using a plug-in dongle for wireless connectivity.

The Asus ROG Strix Go 2.4 works wirelessly with PC, Mac, PS4 and any USB-C toting smartphone too, while also supporting wired connections for even broader compatibility. This makes it one of the most versatile gaming headsets on the market, but does it offer the audio performance to justify the steep price?

There’s a fine line between boring and overbearing when it comes to gaming headsets. The Asus ROG Strix Go 2.4 hits the sweet spot, with subtle styling – such as the ROG logo and angular design – making it clear this is a gaming headset, yet could still easily fit into a formal setting if you fancy bringing it to the office.

The headset is pretty lightweight at 290g, so you needn’t worry about any neck pains after extended use. The padded ear cups and headband also ensure comfort, allowing me to spend hours on the Switch without issue.

The headband is adjustable, which should be a delight for big-headed gamers. I’ve no concerns of this strap snapping, with a metal plate protecting it from nasty clatters. 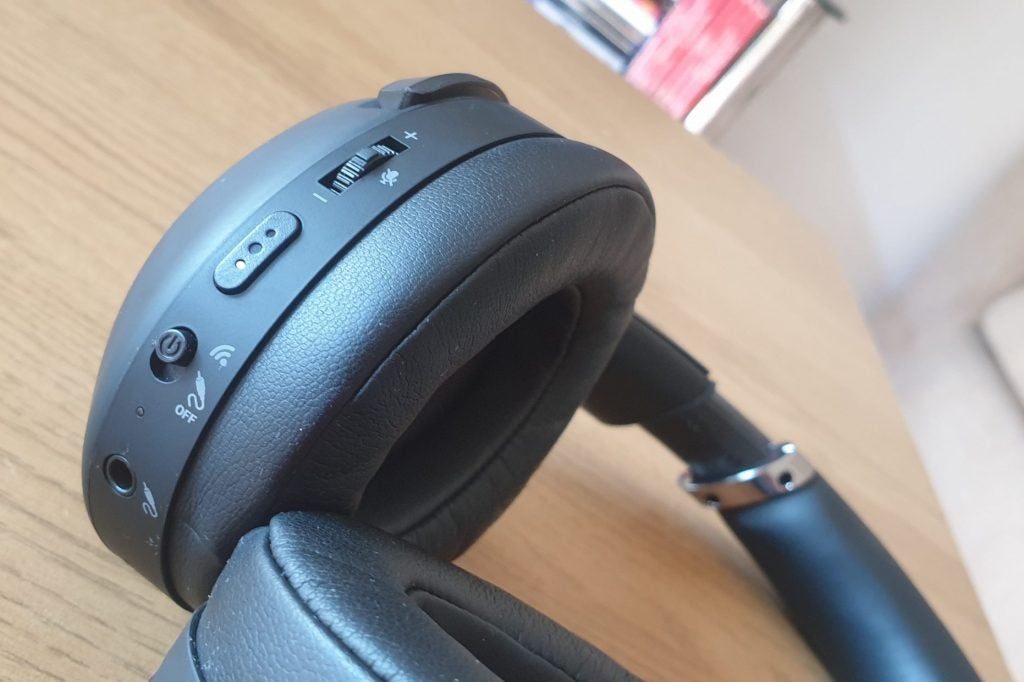 There are a few on-board physical controls on the headset’s cup, that let you  alter the volume, mute the microphone, pause/play/skip tracks and swap between wireless and wired modes. Despite so many features, it was never confusing for me to use them blindly, with Asus smartly separating them up via a dial, button and switch.

The ROG Strix Go 2.4 can easily be folded up to fit into small spaces such as a drawer or the bundled Carrying case. I’m a big fan of the case, which has a pouch for various wires and a dedicated slot for the wireless adaptor. Despite this it remains small enough to be super portable. There’s also enough padding here to keep the headset protected. 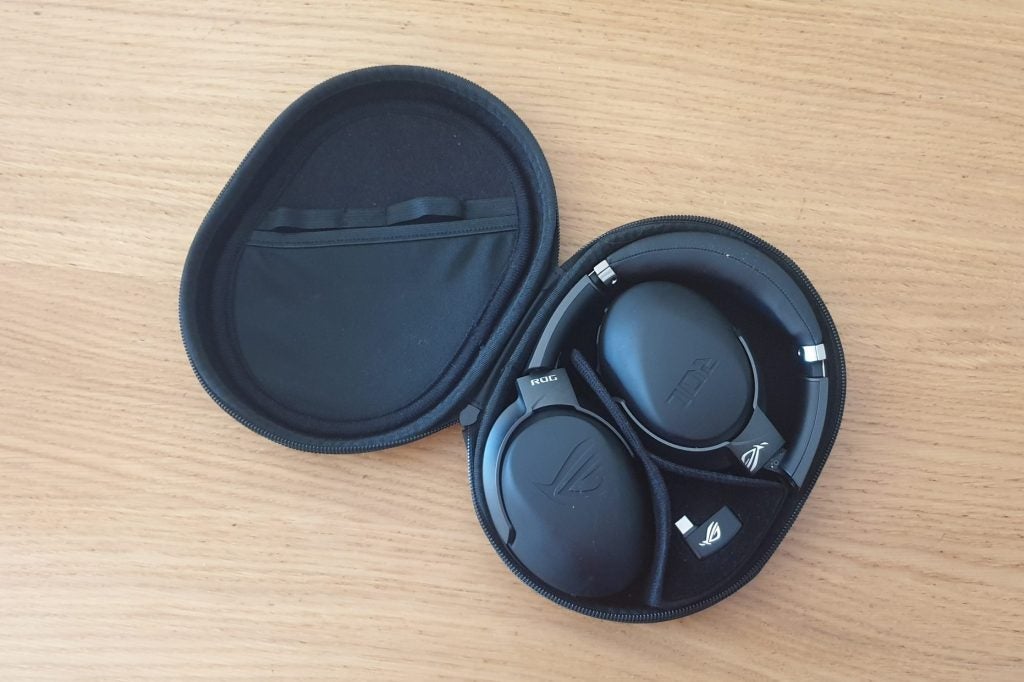 The Strix Go 2.4 comes bundled with a detachable boom microphone, 3.5mm audio cable, charging cable, USB-C dongle and a USB-C to USB-A adapter to allow wireless compatibility with the PS4 and older gaming laptops. Asus has ensured this feels like a top class package by including all the required accessories, making its steep price less intimidating.

While the main talking points of the Asus ROG Strix Go 2.4 are its versatility and wireless features, its stellar audio chops should not not be forgotten.

Both video game sound effects and Spotify music tracks sound excellent, with the 40mm drivers providing detailed vocals and head-banging bass. Dialogue was always clear for games, while giving justice to the explosive battlefields in shooter and action ventures. It’s worth mentioning that hi-res audio is available only with a wired connection, but that’s to be expected.

Sound leakage was only noticeable when pushing the volume to ear-deafening decibels, so you needn’t worry about passersby hearing your guilty pleasure tracks. 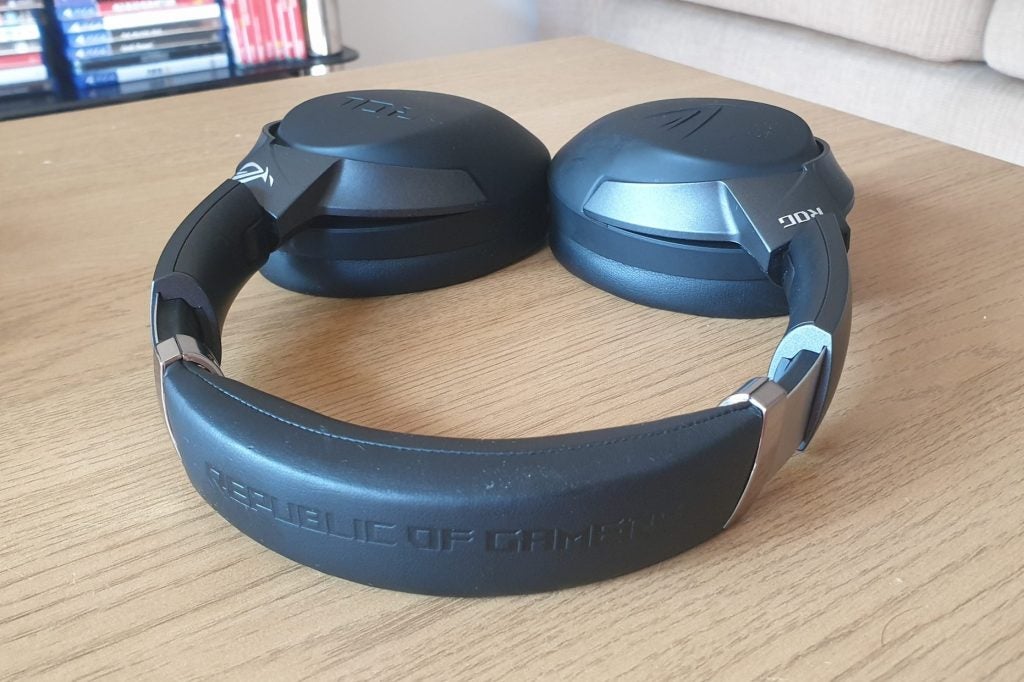 Thanks to the ear cup’s tight seal, the ROG Strix Go 2.4 is effective at drowning out background noise; to such an extent that I couldn’t hear my girlfriend calling my name on multiple occasions. This does mean you should be wary of using them outside, as you probably won’t be able to hear incoming traffic.

Both the integrated and detachable boom mic feature AI-Powered noise cancellation, which is superb at blocking out background sounds such as keyboard clicking. I had an Amazon Echo blaring out musicals in the background while I recorded my voice on Audacity, and Strix Go 2.4 impressively reduced the loud vocals to a faint whisper.

Voice capture was also crystal clear, with or without the detachable boom microphone, with no muffling murmurs preventing me from understanding my friends. The boom microphone offers superior audio capture, but I personally prefer the convenience of the integrated mic.

The Asus ROG Strix Go 2.4 can be used with either a wired or wireless connection, with a USB-C dongle proving the magic for the former and the bundled audio cable allowing for the latter.

Wirelessly hooking the headset up to a device is easy, simply requiring you to plug the dongle into a USB-C port to establish a 2.4Ghz connection. It’s this technology that enables compatibility with the Switch, as you can slot the adaptor into the charging port. It works flawlessly with the Switch, with the only issue being that you can’t charge the Switch and use the headset wirelessly simultaneously, but that’s no fault of Asus.

Unfortunately not every device features a USB-C port, with the PS4 being a prime example. While a USB-C to USB-A adaptor is bundled to bypass this issue, it won’t be any help to iPhones and old Android phones. On a brighter note, USB-C is the go-to port format for upcoming devices, with it already confirmed to feature on the PS5. This means connectivity options for the Strix Go 2.4 are only going to improve in the future. 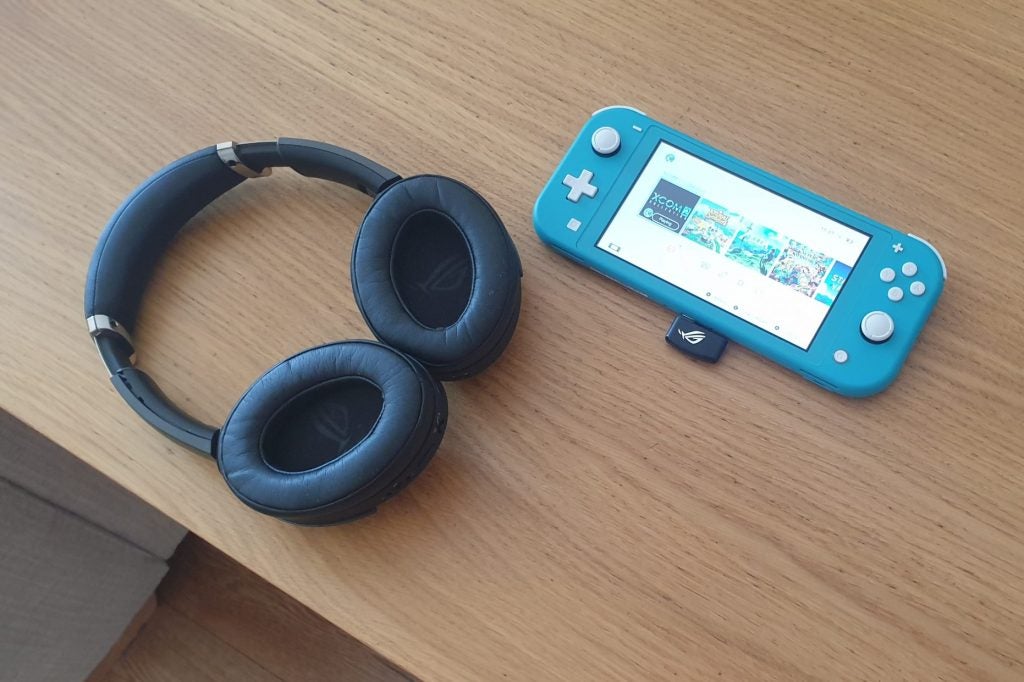 It’s a shame the ROG Strix Go 2.4 doesn’t feature Bluetooth as well as 2.4GHz wireless, as it would open up the range of supported products considerably. Still, if you’re only going to be using it for your Switch, PC, PS4 and/or modern Android smartphone, then it shouldn’t really be an issue.

The wireless 2.4Ghz technology is a fantastic alternative to Bluetooth. Audio lag isn’t noticeable and the 20-metre range is outstanding – I felt liberated being able to leave my phone at my desk and continue to listen to my Spotify playlists while roaming my flat.

The 25-hour battery life is pretty reasonable too, allowing a full day of gaming without needing a recharge. Since it supports USB-C charging you can either use the bundled power cable or even the dedicated Nintendo Switch charger, with the universal solution proving very useful.

Should you buy the Asus ROG Strix 2.4?

The Asus ROG Strix 2.4 is a fantastic gaming headset, especially since it’s wirelessly compatible with a huge number of devices, including the Nintendo Switch.

Switch users will no doubt love being liberated by the wire, with excellent audio quality, clear microphone and a comfortable fit all ensuring there are no compromises with going wireless.

It’s admittedly not a cheap headset, but with Asus bundling plenty of accessories, including a Boom mic, carry case and USB-C to USB-A adaptor, the ROG Strix 2.4 still represents great value.

Those without a Nintendo Switch may prefer to go for a Bluetooth headset for broader wireless support, but the Asus ROG Strix 2.4 remains an incredible option for anyone with a slew of USB-C flavoured devices.