This laptop comes in a variety of specifications, but the key differentiators between models are the processor (Core i5 or i7) and graphics card (Nvidia GeForce GTX 1050 or 1050 Ti). The model on review here is the cheapest option, with a quad-core Intel Core i5-7300HQ processor clocked at 2.5GHz up to a maximum of 3.5GHz and the GTX 1050 GPU with 4GB of video memory. Along with 8GB of DDR4 memory and a 128GB SATA SSD, this machine motors along nicely in everyday tasks, and is happy enough to fire up video and photo editing tasks as well.

In the GeekBench 4 benchmark, it managed single- and multi-core cores of 3973 and 10801, which are both excellent results that soundly beat the Acer VX 15 that’s powered by the same processor. In the gaming tests it acquitted itself well. Tomb Raider at High settings in Full HD was handled at an average frame rate of 44.2fps, which is very playable. Shadow of Mordor at Ultra, clocked in 46.1fps. In Battlefield 1 at the game’s own suggest automatic Medium settings ran at a steady 65fps.

Full HD at Medium settings is this laptop’s sweet spot in the latest AAA games, but expect much higher framerates in eSports titles such as CounterStrike and DOTA. If you want more performance, consider the 1050 Ti model, and take a look at Trusted’s 1050 Ti  review for a detailed performance breakdown. The fan on the left side of the laptop gets up to a proper whirr when the machine is under sustained load. It’s relatively loud, and even if you’re gaming with a headset on, anybody in the same room as you probably won’t be particularly pleased with your presence. It’s no worse than the competition, though, and certainly quieter than gaming laptops of years gone by.

SSD performance is fine, but doesn’t come close to higher-end machine with NVMe-based storage. The 128GB SATA unit is fine, putting in a CrystalDiskMark read score of 500MB/s, which is fast enough to not be a bottleneck in Windows. The main concern is that that 128GB isn’t really enough nowadays for more than a Windows install and one large game. There’s a 1TB hard disk as a bulk storage drive, but you’ll lose the ability to load quickly into games. 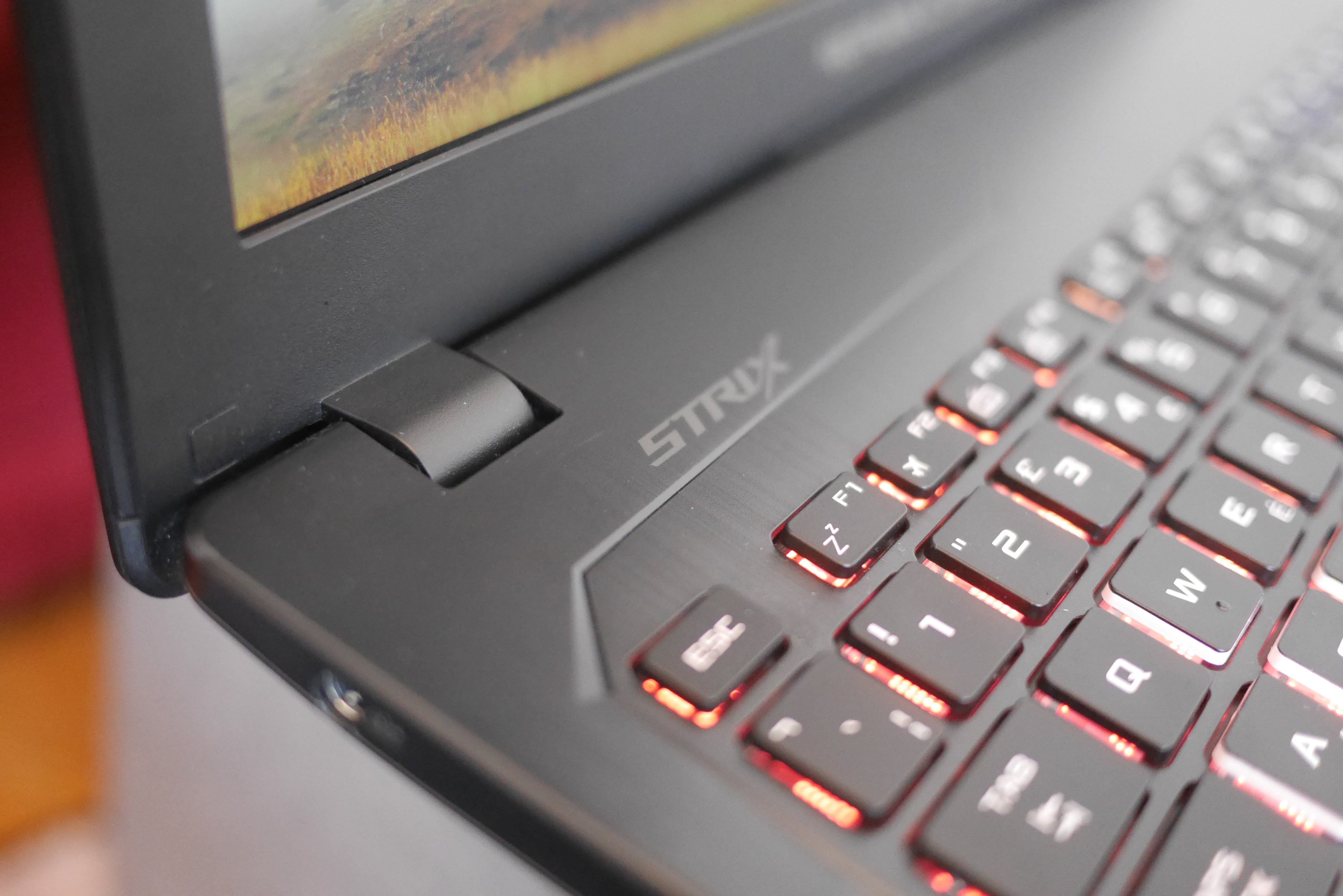 There’s always compromise when you’re not paying top dollar, and Asus has chosen to give the battery in the GL553 short shrift. In the easy Powermark benchmark Trusted uses, it lasted just over four hours, which is longer than some gaming laptops but less than half what the Dell Inspiron 15 7000 Gaming is capable of.

Should I buy the Asus ROG STRIX GL553?

Of the three big-brand, sub-£1000 Trusted has tested, the Asus ROG STRIX GL553 is the most well-rounded. Its biggest shortcoming is battery life, and even then it’s not a complete lost cause in the portability department. The cheapest Dell Inspiron 15 Gaming, which features a near-identical specification, has a much poorer screen, and the same is true of the Acer Aspire VX 15. At this price, the Asus is the best buy.

At the top-end (around £1100 for a Core i7, GTX 1050 Ti) model, though, the Dell is a better bet as it comes with a significantly improved IPS screen and still benefits from excellent battery life.

A great all-rounder of a gaming laptop.