Asus ROG Strix 2: An opening look at Asus answer to the Gigabyte Aero 15

The Asus Strix line of laptops has a track record of being solid, workhorse, mid-range gaming laptops. Which is why when Asus unveiled its next-generation Strix Scar 2 and Hero 2 laptops at Computex I expected a functional, but ultimately un-inspiring refresh.

Asus hasn’t confirmed the price for either laptop.

We’re also still waiting on a release date for both.

Therefore, it was such a nice surprise to find the Scar 2 and Hero 2 have been completely reworked to have a pleasingly modern, XPS-inspired, design and not just another modest hardware refresh. The only issue is, other players have already beaten them to the punch, like Gigabyte with its new Aero 15 and Aero 15 X. 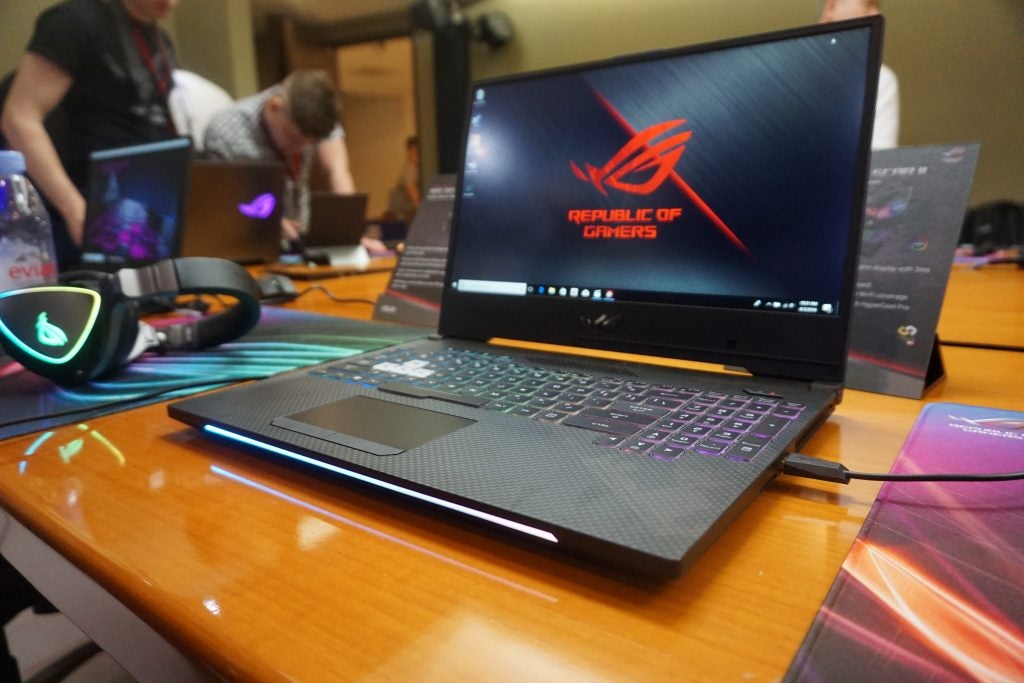 The Strix 2 is being sold in two variants: the Scar 2 and Hero 2. The Scar 2 is aimed at semi-serious gamers who regularly play FPS shooters. The Hero, by comparison, is designed for less intensive MOBA games.

From the outside, the Scar 2 looks fairly similar to its predecessor: it has the same two-tone brushed metal finish and RGB ROG Strix logo on its back.

Up close you’ll spot a few differences. For starters, Asus has added an RGB strip along the laptop’s bottom. Personally, I always want laptops to have less, not more RGB lighting, but some people in the room outright swooned at the addition. Each to their own on RGB I guess.

The Strix Scar 2’s screen has a 2.33cm smaller bezel than its predecessor. This, coupled with the soft touch, slightly rubbery material surrounding the keyboard and trackpad make it look and feel like a slightly gamified Dell XPS, which is no bad thing. 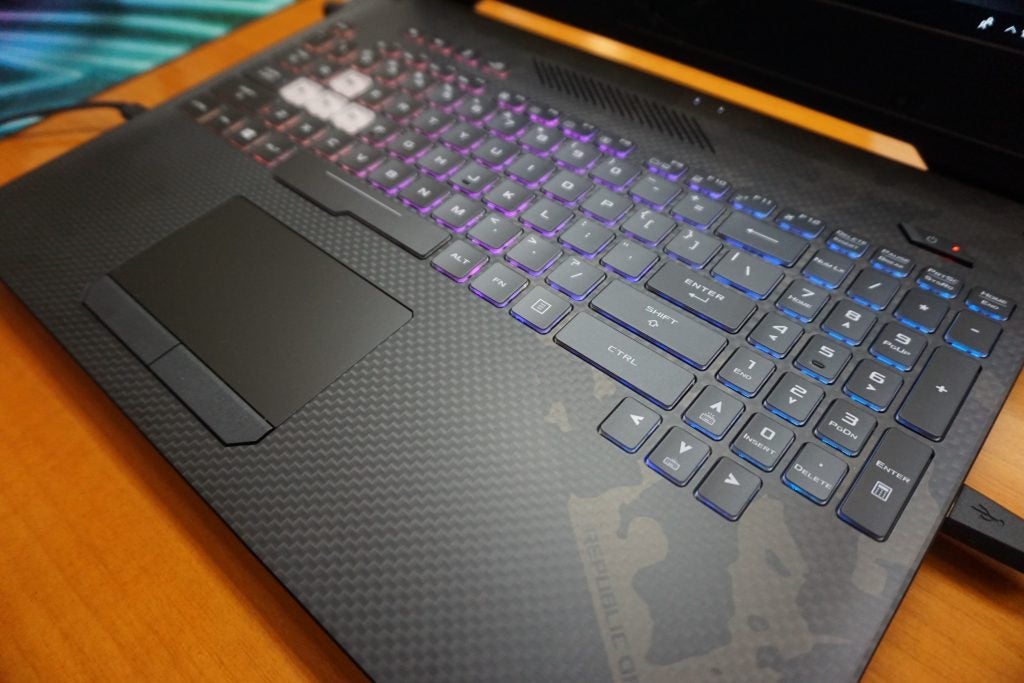 The backlit RGB keyboard uses the same membrane switches as before but has an improved 1.8mm travel. Though minor, this made it feel slightly more responsive while gaming.

The improved cooling system is the final noteworthy change. On the outside, the system is shown off with a nifty new trapezoid cut lid on its back. The cutaway is a minor touch Asus claims will improve the laptop’s thermal performance by up to 27%. It apparently does this by stopping the lid accidentally blocking airflow from the cooling fans, which have also had a spruce.

Asus claims the new 12V fans have even more blades, offer 20% better speeds and 43.5% more airflow than the original ROG Strix. On top of this, the heat pipes have extra cladding to help keep the GPU and CPU below 90 degrees during intensive gaming sessions.

I only had a couple of hours with the laptop in a very noisy press room and until I get a chance to benchmark and properly game on it I can’t attest to performance or how quiet it is. But if there’s any truth to Asus’ claims this could be a key selling point for the laptop. Competing laptops, like the Aorus X5, are notoriously led and have a tendency to run fairly hot during prolonged gaming sessions.

For those that want a little more control over the fans, Asus has also loaded three different modes: silent, balanced, fan over boost. The self-descriptive modes are easily cycled through using a Fn+FS shortcut. 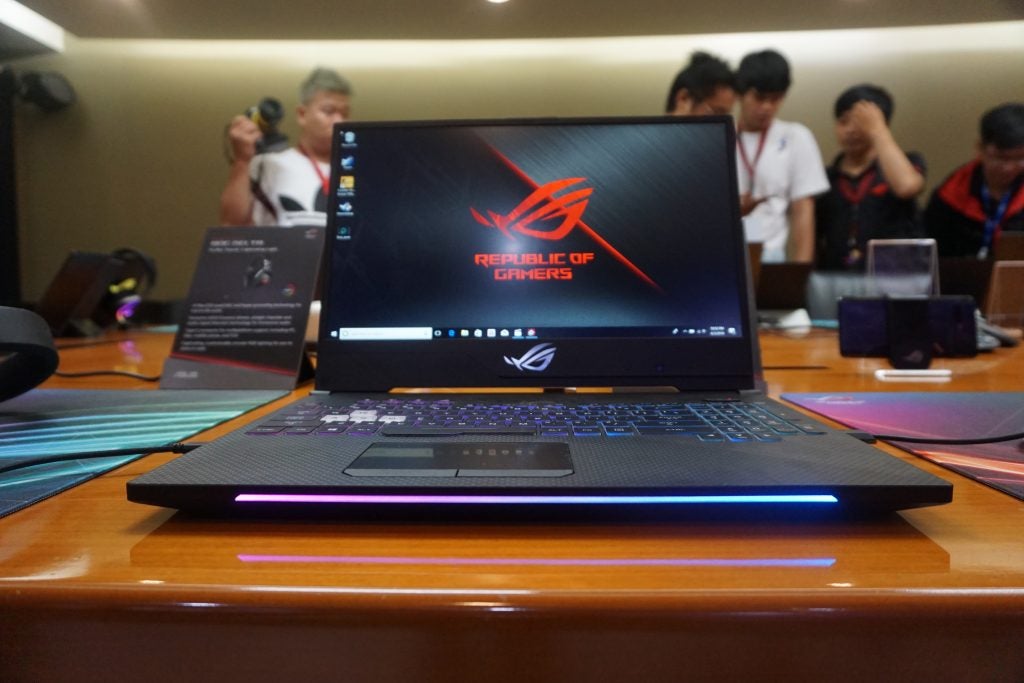 Outside of this, the specs remain largely unchanged. The new Strix 2 laptops have the same GPU, CPU, memory and storage options as their predecessors. This means the higher end Scar tops out with an 8th gen i7 CPU, GTX 1070 GPU and 32GB of DDR4 memory. Some people may bemoan the lack of a 1080 GPU option, but the lack of 1440p or 4K screen options mean its absence is more than forgivable, especially when you consider how good the FHD screen is. The 15.6-inch panel retains the 144Hz refresh rate of its predecessor, making it a solid choice for competitive online gamers.

You can see a full spec sheet for the new ROG Strix Scar 2 and Hero 2 in the table below. 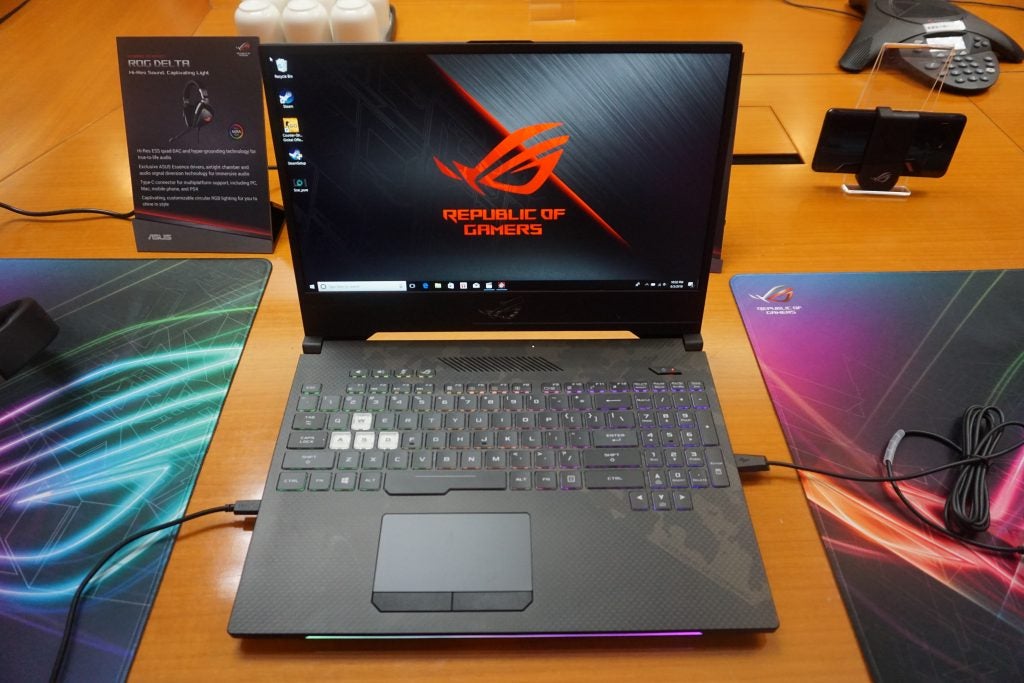 But the few changes Asus have made look like definitive positives. The new screen is a decent upgrade that puts it on a par with key competitors, like the Gigabyte Aero 15. Personally, I could have done without the extra RGB lighting, but the improved cooling is another very welcome addition.

Hopefully, the new Strix 2 laptops will make good on their opening promise when the launch in the UK.