Meanwhile, new to this version is built-in support for WTFast, game network traffic prioritisation, and the option to dedicate one Wi-Fi band for gaming. The router has built-in malware protection, too.

These have to be manually attached, which is a bit of a faff, but at least this offers the option of fitting alternative aerials or replacing broken ones. And let’s not forget that you can still pull the same party trick as before, flipping the aerials round and making this router look like some sort of mechanical spider – oh, the fun to be had. 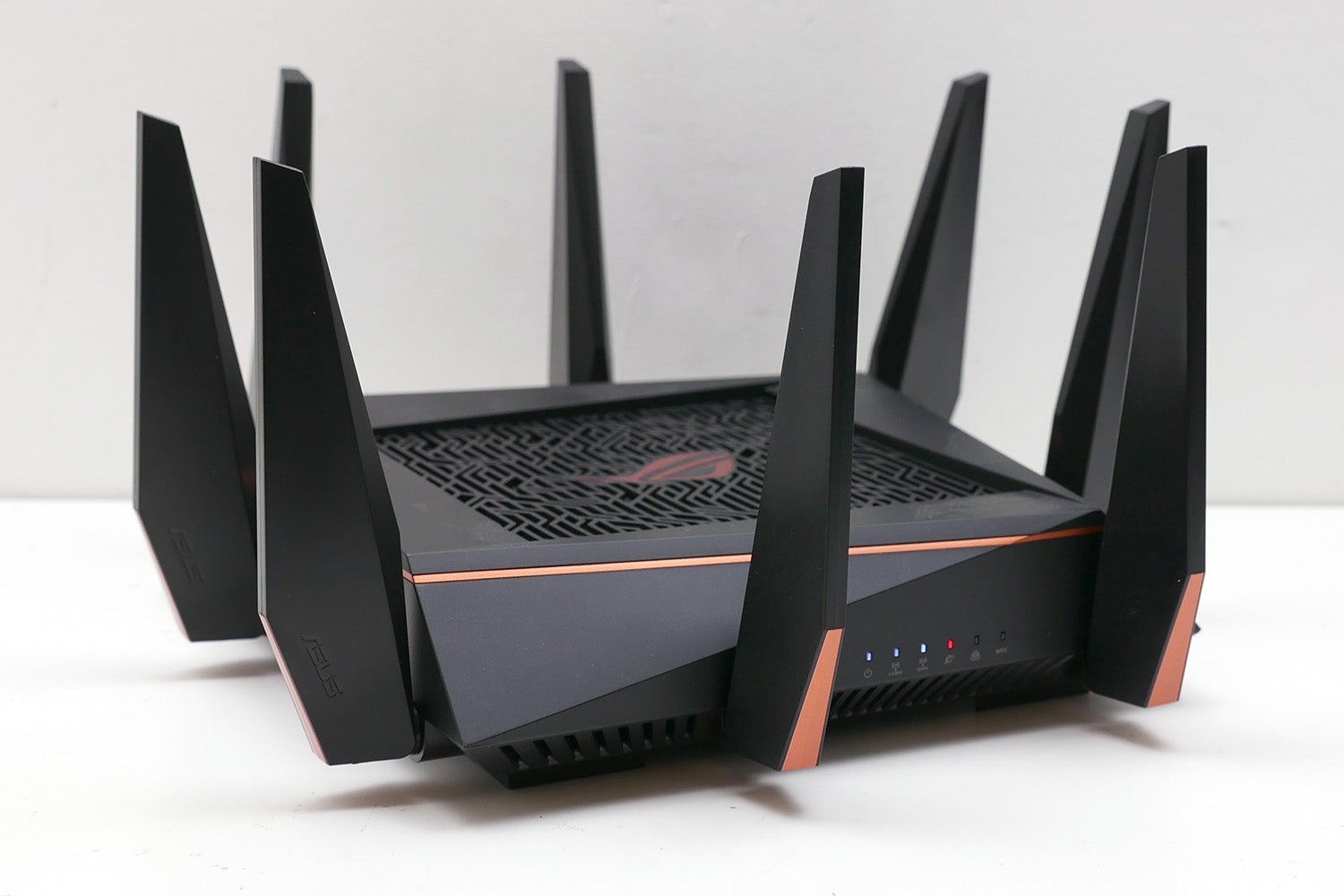 Other physical features include an array of six LEDs on the front edge that indicate power, 2.4GHz and 5GHz W-Fi (oddly, both 5GHz bands are combined into one LED), Internet status, Ethernet activity and WPS. It’s a shame Asus hasn’t added a full range of LEDs to indicate the status of each individual Ethernet port; this makes it a little more tricky to troubleshoot your connections.

Meanwhile, round the back there are eight Ethernet ports, a ninth Ethernet port for hooking up the router to your modem, and the two USB 3.0 ports. Alongside the power socket there’s also a power switch, which is useful since it saves you having to unplug the power cable to reset the router – something that you’ll inevitably have to do from time to time.

As for Wi-Fi and other internal features, this router offers the same core AC5300 Wi-Fi capabilities as its predecessor – a sign of how Wi-Fi development has finally steadied after several years of constant new developments. 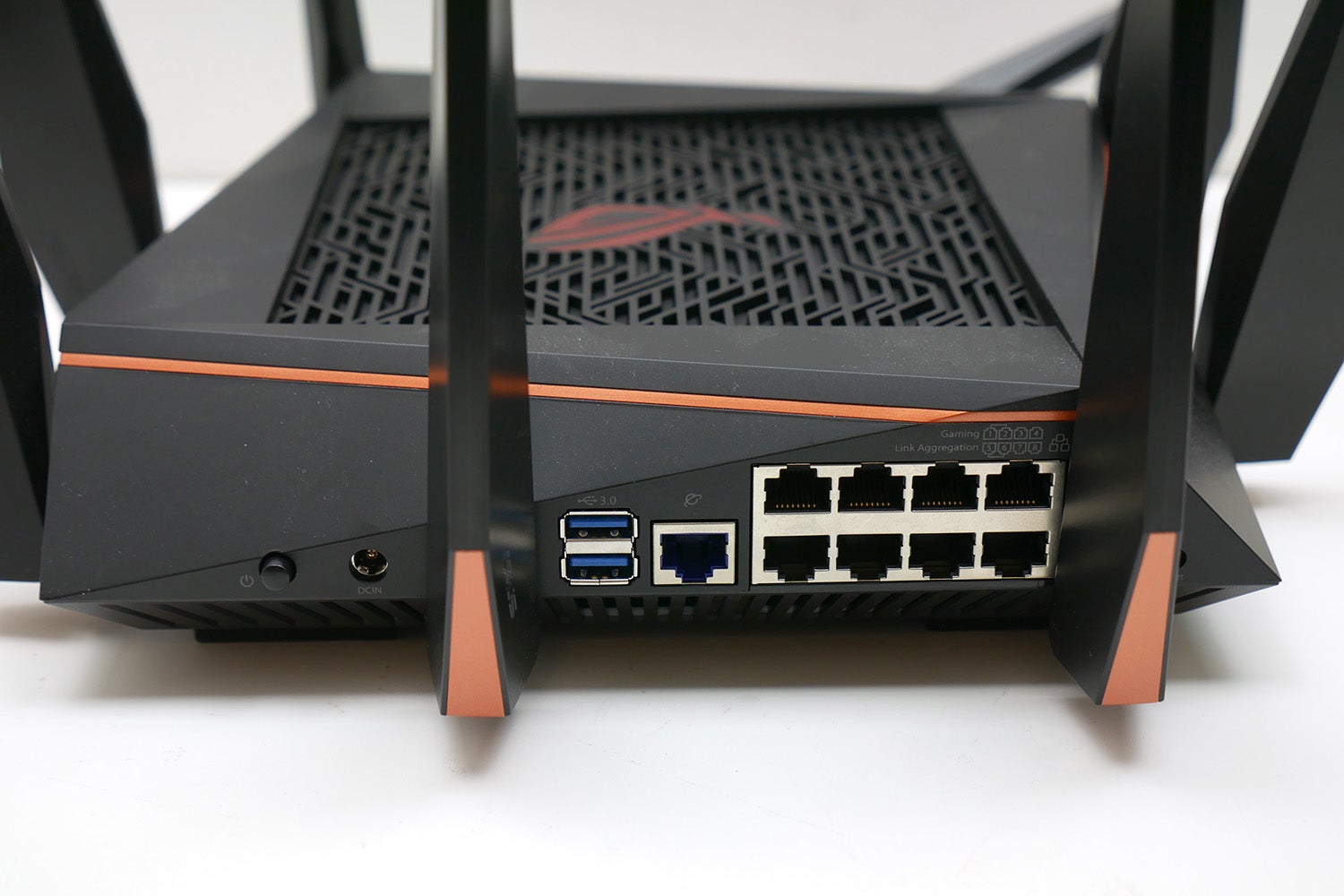 That AC5300 number translates to two 5GHz and one 2.4GHz WiFi bands, which can theoretically push 2167Mbps, 2167Mbps and 1000Mbps respectively. There are very few, if any, devices that can reach those speeds individually, but the theory is that the more headroom a router has, the better it’s able to cope with many devices connecting to it.

This router also supports MU-MIMO, allowing it to sustain better speed and responsiveness while multiple client devices are connected – and actively being used – at the same time.

You can opt to individually name and control each Wi-Fi band, which is useful if you want to prioritise certain bands for certain devices; or you can use band steering – it’s called Smart Connect here. This is where the router presents just one Wi-Fi name (SSID) and the router then decides which band to use, depending on the speed of the client device, signal strength and so on. Although convenient, it often means overall speed isn’t as high and you have less granular control.

Inside this router you’ll find a 1.8GHz quad-core processor, 1024MB of RAM and 256MB of flash memory, the latter is twice the allocation of the RT-AC5300.

The USB ports can otherwise be used for sharing printers or USB storage devices, the latter of which you can also access from anywhere via Asus’ AiDisk service to set up as an iTunes server, Time Machine server and more.

Other extras include a traffic analyser that provides a real-time view of how much data is passing through the router, and from which clients. 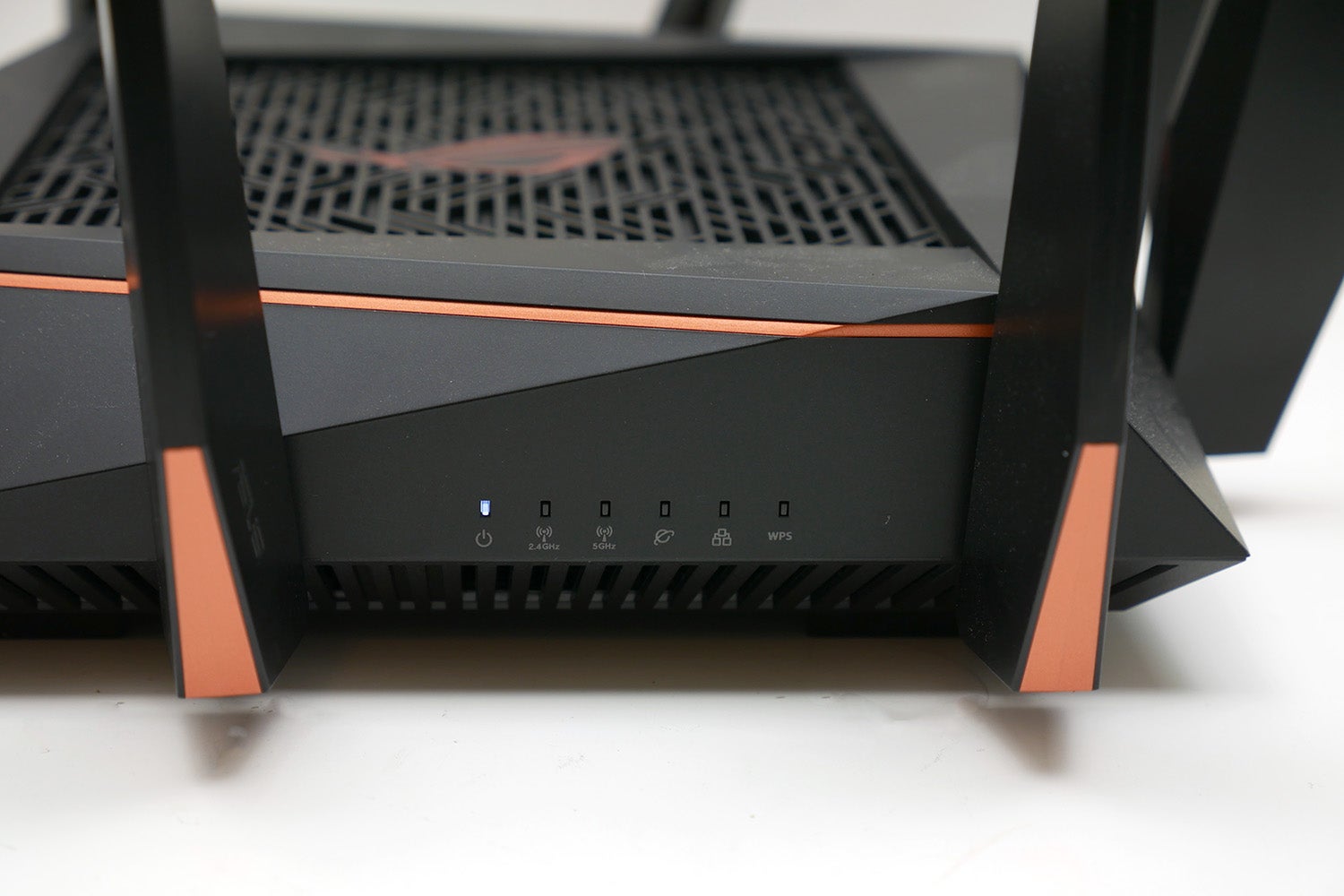 One of the most notable extras is built-in malware protection, provided by TrendMicro. Game IPS – note that there’s nothing particularly ‘gaming’ about it – it provides real-time assessment of data passing through the router to protect against nasties, plus it will automatically isolate any devices on your network that have been infected.

As for gaming features, Game Boost is basically a quality of service (QoS) system for prioritising gaming traffic. There’s also Game Radar, which provides server locations and ping status for a number of different game servers, allowing you to see which is the best to connect to.

Then there’s WTFast. This is an established worldwide game network service that aims to optimise your connection to game servers, and is something that can be installed on your PC. However, the GT-AC5300 has support built in so it can provide WTFast optimisation for all client devices.

Initial setup of the GT-AC5300 is fairly straightforward. Plug it into your router, reset both devices and it should automatically configure and connect to the internet. Then, to further set it up, simply connect a device to it and pop along to the default IP (192.168.1.1) in your web browser.

So far, so typical. But once you’re in the router’s menu system, things get a little more complicated. The sheer mass of options is both daunting and potentially confusing. For instance, there are 21 different menu tabs that run down the left side, each of which contains multiple submenus and options – and this isn’t even with the advanced menu features enabled. 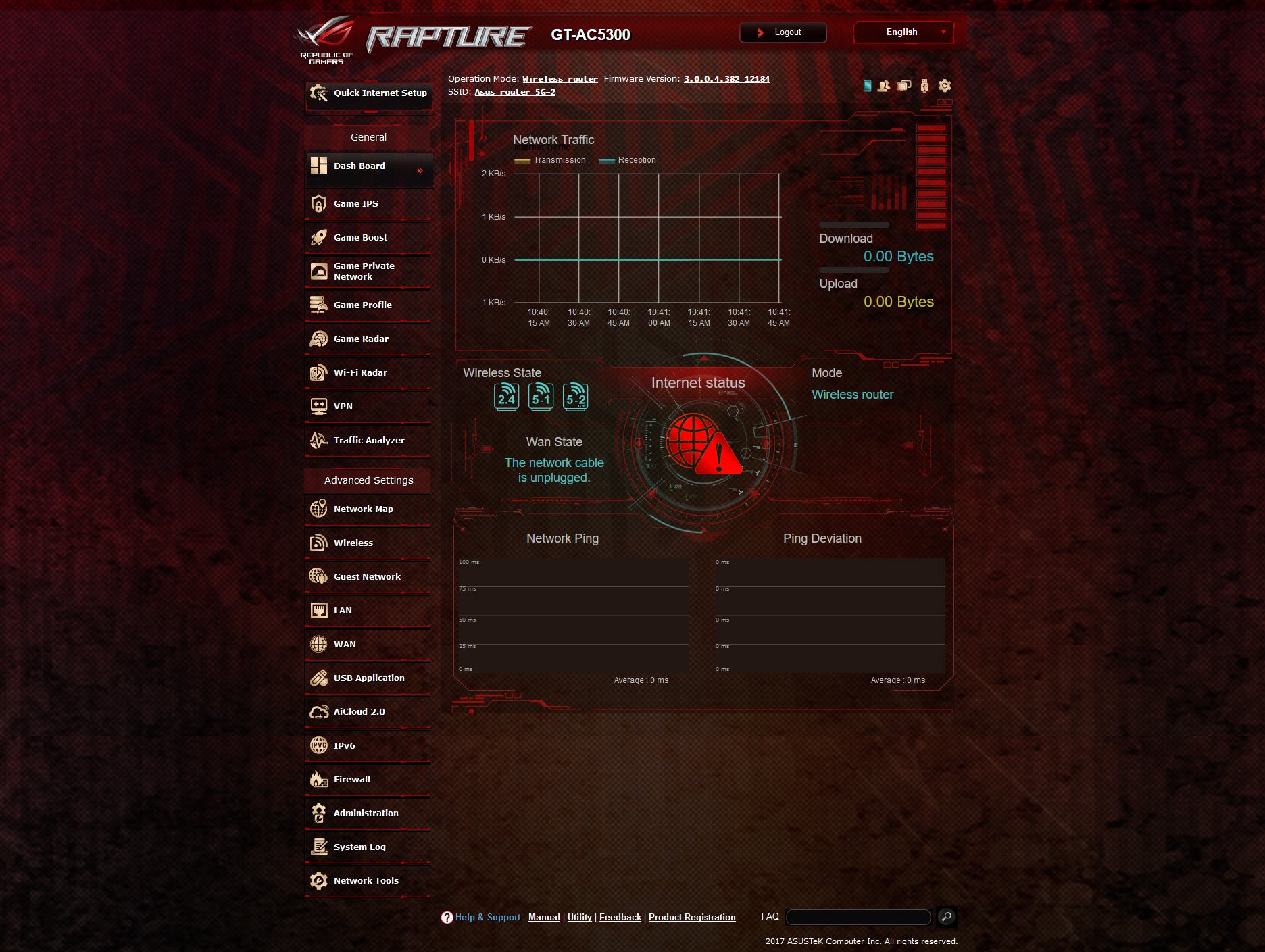 It’s also particularly egregious that Asus thought it necessary to have the router automatically open your web browser to a page informing you that there’s no internet connection each time you connect to it. It’s an insufferable annoyance when testing it, perhaps, but it can be a rather unhelpful and irritating feature even in normal use. Thankfully, this behaviour can be turned off.

On the up-side, the sheer wealth of features and options available means you can tweak this router to the Nth degree. You can also configure the router via a mobile app, which does have a slightly more streamlined interface, but we suspect most users will prefer to go down the web browser route.

The Asus RT-AC5300 was the fastest router we’d tested and the GT-AC5300 largely follows suit. Starting with a short-range max-speed test (2m, line of sight), using a PC equipped with the Asus PCE-AC68 adapter, I measured the GT-AC5300 as delivering up to 685Mbps (635.9Mbps average) over one of its 5GHz bands – which is, to all intents and purposes, as fast a speed as we’ve seen from a router in any practical test.

However, as we’ve noticed with several other dual 5GHz routers, the second 5GHz band performed far worse. Testing with several different Wi-Fi receivers, it wasn’t possible to get beyond 225Mbps. I’m fairly certain that this router is capable of better under certain circumstances, but straight out of the box this is all it could manage.

Meanwhile, on the 2.4GHz band, it delivered a more typical 132.8Mbps. Not the fastest we’ve ever seen, but thereabouts for a high-end router.

Moving onto range testing, we used the D-Link DWA-192 USB Wi-Fi adapter attached to a laptop and tested at two more locations: at 5m, with one brick wall between the router and laptop; and then at around 7-8m, one floor up and two brick walls away. 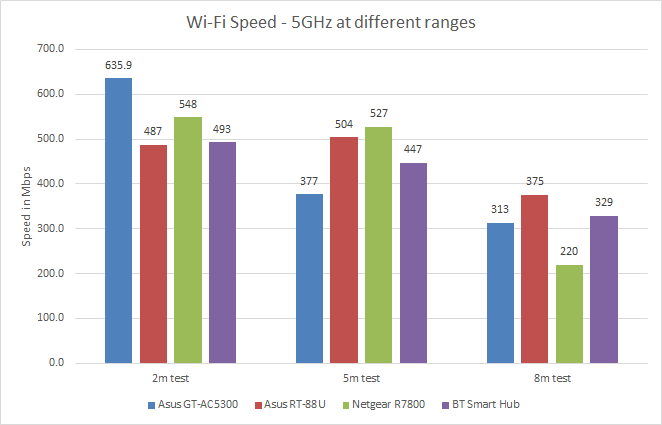 Opting for the Smart Connect option, maximum performance wasn’t all that impressive, peaking at just 139Mbps. However, that speed was consistent as I moved around the house, with the router continuing to deliver 116.3Mbps at the long-range test location.

As for USB storage speed, this has long been one of Asus’ strongest areas, and sure enough the GT-AC5300 delivers. It could write to our USB thumb drive at 68MB/sec (541Mbps) and read back at 95MB/sec (670Mbps), where many other routers can’t even manage 50MB/sec.

As for all the gaming extras, the first thing to note is that the bulk of them are only of concern if you live in a household where there are often many people online at once. Most of the features are about getting your gaming traffic through ahead of anything else, so if there isn’t much competition to start, it’s all rather unnecessary. It certainly has the potential to work, but in our testing we weren’t really able to tax the router enough to notice any difference.

As for WTFast, some gamers swear by it, but equally I know of many serious gamers that get on quite happily without it. In my time with the router, I didn’t notice a difference.

None of which is to say all those extras are pointless, but it’s likely that only the most demanding users will possibly see any benefit. 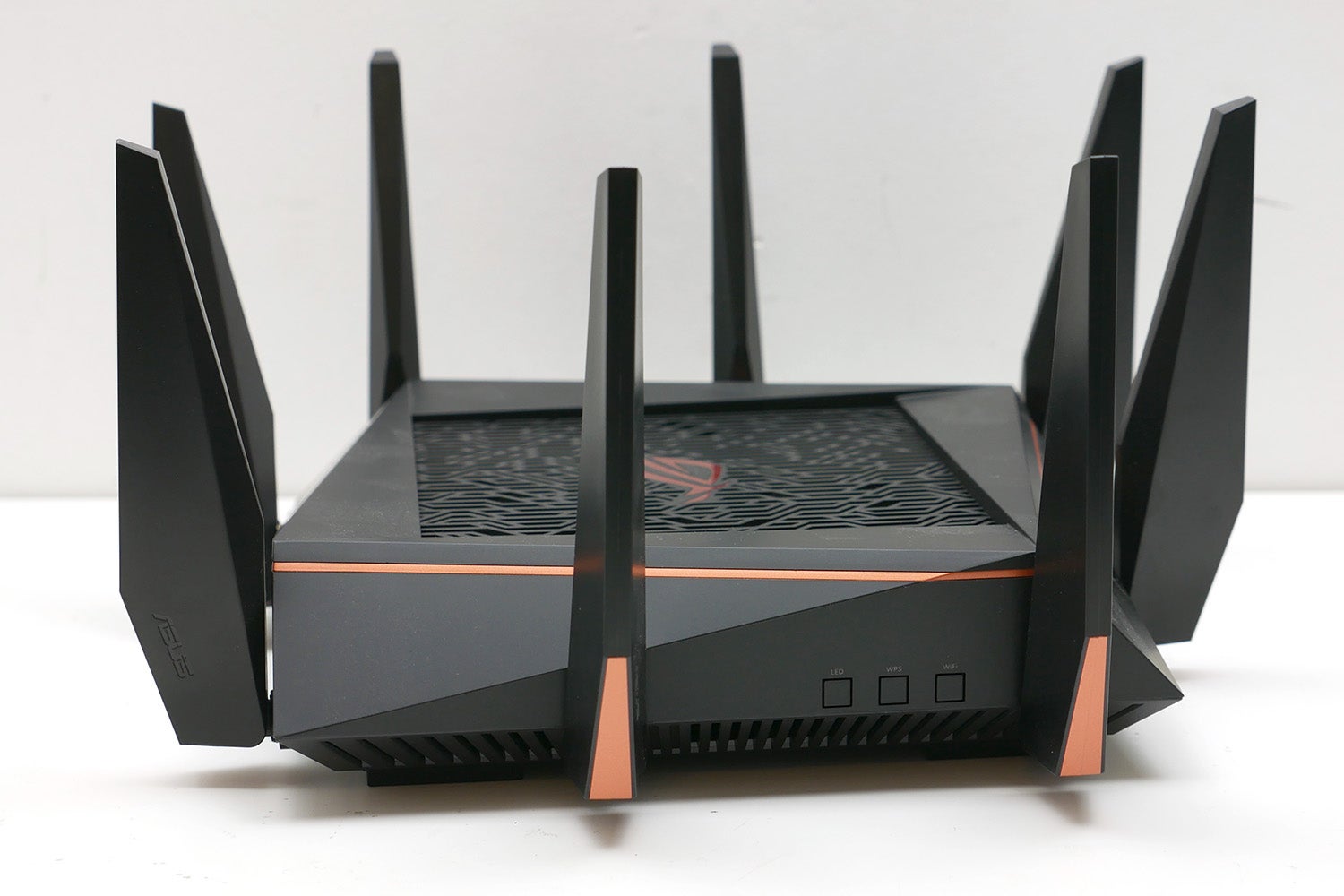 The GT-AC5300 is undoubtedly a top-notch router that delivers all the speed and features most users could ever hope for. Its Wi-Fi is as good as it gets for speed, there are plenty of Ethernet connections, and Asus’ USB sharing options are the most comprehensive in the business.

Add in all the gaming and security extras and you’ve got a router that wants for very little. If you’re a gamer and having the best is what it’s all about, the GT-AC5300 fits the bill.

However, there’s no getting around the fact that it’s total overkill for the majority of users, and you can get the key basics of fast, wide-range Wi-Fi for far less. In particular, if you don’t really need the many-user advantage of tri-band Wi-Fi, Asus’ own RT-AC88U offers many of the same features – including the eight Ethernet ports – for £130 less.

Also, if your main priority is simply to get reliable Wi-Fi all around your home, consider a mesh router system.

A monster of a router with power and features to spare. It’s probably overkill for most users, though.