What is the Asus ROG Maximus IX Formula?

This is one of the priciest consumer motherboards on the market, so Asus is going to have to go some way to justify its £319/$409 cost. Thankfully, it looks the part thanks to its metallic armour and water-cooling accessories, and it’s riddled with features elsewhere.

Related: Everything you need to know about Kaby Lake

The most eye-catching bit of design on this board can be found all over its black PCB. A huge, chunky shroud of metal extends across almost all of its surface, designed to help dissipate heat from graphics cards and assist with lower system-wide temperatures. Around the rear, the ROG Armour continues – this time it’s made from steel and is designed to prevent the heavy board from bending. 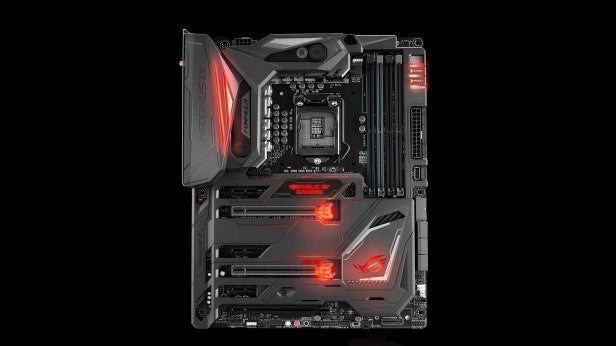 In the top-left corner of the board, more metal rises. The rear IO is protected by a large shroud, and the entire area around the CPU socket is covered with a huge heatsink. It’s far bigger than anything else on rival boards, and there’s a good reason for that – the heatsink can be hooked up to a water-cooling loop.

It’s an extreme measure that will only appeal to the most hardcore of tweakers, but it’s undoubtedly impressive. The interior of the heatsink contains a copper-lined channel, and threaded ports at either end hook up to your existing hardware to complete the circuit.

The water-cooling compatibility is a headline feature, and it’s not the only thing to like on this board. There are RGB LEDs in the major heatsinks and around the PCI slots, and the Republic of Gamers logo is similarly adorned. As usual, it’s possible to alter these lights in software, and two dedicated headers can support synchronised strips of lights elsewhere in the PC. 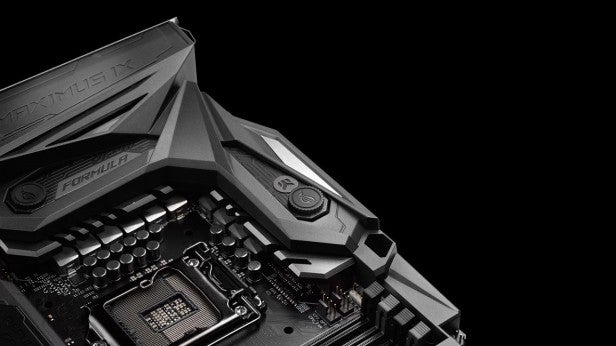 There are smart, touch-sensitive power and reset buttons near the top of the board, alongside a two-character POST display. There are more buttons, too: at the bottom there are switches to use safe mode and check the memory.

The Asus has other attributes that I expect from a high-end gaming board. It’s got SupremeFX audio and boosted, game-friendly Ethernet, and the backplate serves up 802.11ac dual-band Wi-Fi. It even supports Asus’ 3D printing – if you’ve got the right gear, you can create cable combs, SLI bridge covers, fan grilles and a personalised nameplate.

Asus has crammed plenty around the backplate’s two aerials: four USB 3.1 ports and both Type-A and Type-C connectors are here, alongside BIOS Flashback and Clear CMOS buttons. Those, again, are great for tweakers.

This board nails the brief for high-end features, and the Asus also gets the basics right. Its quartet of memory slots support DDR4 at a mammoth 4133MHz, and it can handle two Nvidia cards and three AMD GPUs – enough for almost everyone. Its two steel-reinforced PCI-Express x16 slots run at 8x mode if they’re both used, and there’s a third slot and two PCI-Express x1 sockets. 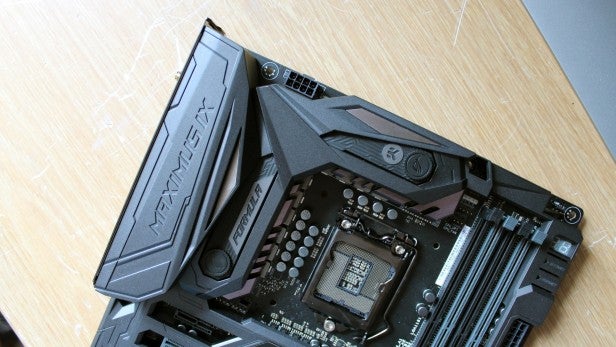 There are two M.2 sockets hidden beneath the huge metal shroud alongside six SATA ports. There’s no SATA Express or U.2, though, although these are less important concerns.

Software is included to fine-tune the audio between applications, and there’s an app to tweak CPU and GPU speeds as well as monitor speeds, temperatures and cooling. The Maximus also has the Asus UEFI BIOS, which is a familiar tool and the best on the market.

My only concerns are minor. The sheer amount of hardware around the CPU socket might mean it’s tricky to fit chunky coolers, although that does depend on what products you try to fit to this board. It’s the thickest and heaviest motherboard I’ve tested, too, so make sure you have a sturdy and capacious case.

I expected the Maximus to return a barnstorming set of benchmark results, and it didn’t let me down.

Its 3D Mark Fire Strike score of 6844 is the best I’ve seen from the current crop of Intel boards. It’s a close-run thing when it comes to these benchmarks, and a better graphics card will deliver a bigger performance boost – but it’s always good to know your board won’t hold back any GPU, and it’s an important symbolic gesture for a board like this to perform well in gaming tests. 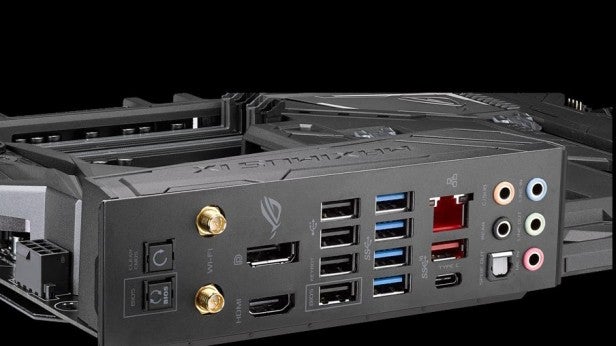 It’s no slouch in application benchmarks, either. Its single- and multi-core results of 5821 and 19,998 just about squeeze ahead of rival boards to make this the quickest Intel-powered board I’ve tested in Geekbench 4. It’s bolstered by solid CrystalDiskMark scores, too.

The Asus’ power consumption figures of 55W and 101W aren’t too great – they’re towards the bottom of the efficiency tables. I suspect, though, that anyone buying this board just won’t care about how much electricity it consumes, and the Formula’s design should negate any extra heat output that’s created by the high flow of electricity.

Should I Buy the Asus ROG Maximus IX Formula?

The latest Asus Republic of Gamers board arrives with a mammoth price, but it justifies its cost in several key areas.

It’s packed with features, from its armor-plated design and water-cooling heatsinks to the RGB LEDs and touch-sensitive buttons, and it stormed through the benchmarks to a set of deeply impressive scores in applications and games.

The vast majority of people just won’t need those features or that level of power, of course, but if you do then it’s worth paying a premium for a high-end board – and the Maximus ticks that box admirably.

This expensive board comes with many features that most builders just won’t require, but extreme gamers and tweakers will appreciate everything that Asus has done to make this board feel near-bulletproof. It’s rapid in benchmarks, too, so it’s worth the cash if you need a suitably muscular motherboard.