Hands-on: The Asus ROG GX800 is the craziest computer I’ve ever used. Here’s why you absolutely don’t need one, but will want one all the same.

If you weren’t able to get your hands on the £3,500 Asus ROG GX700 earlier this year, fear not, you’ve now got another opportunity to splash some cash on a piece of gaming history thanks to the arrival of the spiffy new GX800. Asus does not care one bit that probably fewer than a dozen people will buy the thing, it just wants to prove that it can be done.

But why is it so crazy? I’ve been given exclusive access to a prototype model of the GX800, and while I can’t go into any specific numbers I can tell you that I believe it’s the fastest laptop ever built, both graphically and in terms of processor performance.

Asus has pulled out all the stops to make the GX800 a showpiece gaming machine. The first thing you’ll notice about the ROG GX800 is its enormous footprint. That’s because, like the GX700, it’s a laptop that connects to a separate liquid-cooling dock. They connect together securely and let the GX800 achieve some absolutely ridiculous overclocking. 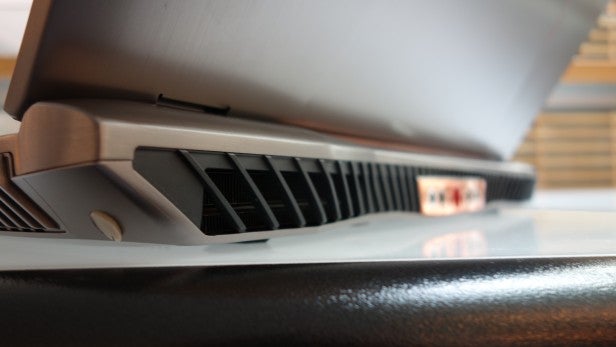 But what is there to overclock? First, there’s a quad-core Intel Core i7-6820HK that would usually have a maximum frequency of 3.6GHz. Here it’s been unlocked to allow it to get to 4.4GHz and beyond.

Last time around, it was only the (single) GPU that received liquid coolant; the CPU had to make do with its own air cooling. This was fine, but it meant it could only get up to a maximum overclock of 4GHz.

Overclocking the upgraded GX800 to 4.4GHz requires a bit of effort on the part of the user; the maximum automatic overclock is a more reasonable 4.2GHz. Manually overclocking also requires a system restart, so if you’re going to use the laptop docked and undocked, you will probably want to keep the GX800 set to the Extreme preset.

An enormous 64GB of DDR4 RAM backs up the GX800’s i7 alongside not one, but two Nvidia GeForce GTX 980 graphics cards. These are full desktop chips running in Nvidia SLI, providing performance not seen on a laptop before.

Even better, the final version of this machine will actually ship with a pair of current-generation Nvidia GPUs, so expect even more power with, potentially. Considering the numbers I’ve seen so far from the GX800 with last-generation GPUs, I can’t even begin to imagine the framerates on the final-spec version. It’s a mouth-watering prospect.

The CPU is obviously desktop-level powerful (it’s well beyond an overclocked Core i5-6600K desktop chip), but it’s the GPUs where things got crazy. I can’t give specific numbers due to the prototype nature of this machine, but two water-cooled desktop graphics processors are about as fast as you’d expect. I’ve never reviewed a PC – desktop or laptop – that runs games faster. 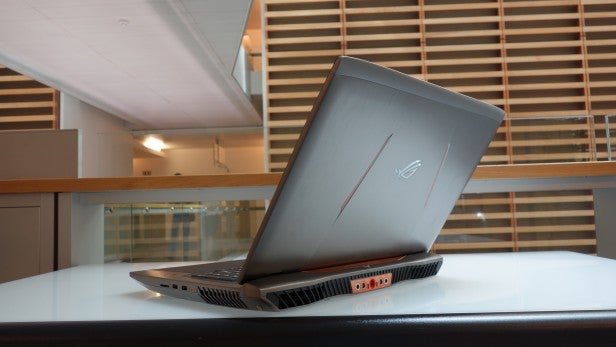 Oh, and let’s not forget the ridiculous combination of three top-of-the-line 512GB Samsung SM951 NVMe SSDs running in RAID 0 (the three drives are mirrored for peak performance) running custom firmware built for the job at hand. The speeds achieved here are, again, blistering.

Without its dock, the GX800 weighs 5.7kg. No worries, though: Asus supplies a travel bag and a wheelie case for it and the dock, so all you have to worry about at LAN parties is the machine being surrounded by amazed onlookers.

You get a desktop-level number of ports around the outside of the GX800. There are three full-size USB 3 ports, two further USB 3.1 Type-C ports (one of which is Thunderbolt 3 compatible), a Mini DisplayPort 1.4 jack, an HDMI 2.0 port, separate 3.5mm jacks for headphones and a microphone, an SD card reader, a gigabit Ethernet port and an extra dedicated port for an optional external Wi-Fi aerial. 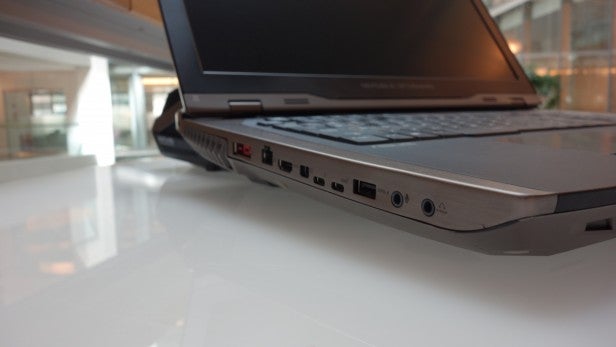 The screen takes the form of an 18.4-inch IPS panel. On my sample it was a Full HD screen, but in the final build this will be an Ultra HD 3,840 x 2,160 panel. This is one of those rare occasions where a laptop’s graphics hardware will be capable of driving a 4K screen. It’s ready for G-Sync, too: This is actually quite important because the ludicrous levels of performance means the GX800 will likely exceed the refresh rate of the screen on a regular basis, and G-Sync will keep it in line to prevent screen tearing.

The GX700’s keyboard was one of its weakest points. It was fine, but it was also a stock Asus ROG keyboard found on various different notebooks. It wasn’t very special and didn’t really match the extreme design of the rest of the machine.

Here, Asus has made amends, fitting the GX800 with its own brand of “MechTAG” mechanical keyboard. It’s chunky, has lots of travel and, according to Asus, the final version will feel and sound much like a Cherry MX Blue switch. In other words, it’ll be loud and satisfying to game on.

The keys are topped with a soft-touch material and each character is backlit, with the on-board ROG software enabling various customisable flashing and static lights in all the colour of the rainbow. There’s a small top row of keys with one ROG software shortcut key and three macro keys. Also present is a dedicated video capture key for your software of choice, and volume up and down keys. There aren’t any media control keys on my prototype, which is something that might need looking at before launch. 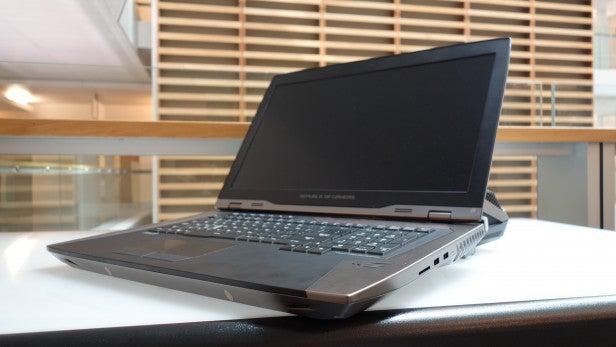 Once finished, this could be one of the best keyboards on a laptop, although very few people will actually get to use one.

The rest of the design is standard Asus ROG fare, with soft-touch plastic, metallic highlights and a dark grey lid with LED highlights. It’s a classy machine made all the more impressive by liquid-cooling dock. The only area that some may find fault with is the shiny copper-coloured highlights, which feel like they’re from the HP Spectre 13, not an Asus ROG machine

As far as I can tell, the dock hasn’t changed a huge amount in terms of external design. This is a good thing; the connection mechanism feels as secure as ever and while the dock doesn’t exactly run quietly when the machine is under load, it’s not overbearing. Just a constant “whooshing”.

Internally, there have been some changes. The valves connecting the cooler to the laptop have been upgraded, while the pipes themselves have increased in size and the volume of coolant inside has also been increased to cope with the extra cooling demands of the CPU and two GPUs. 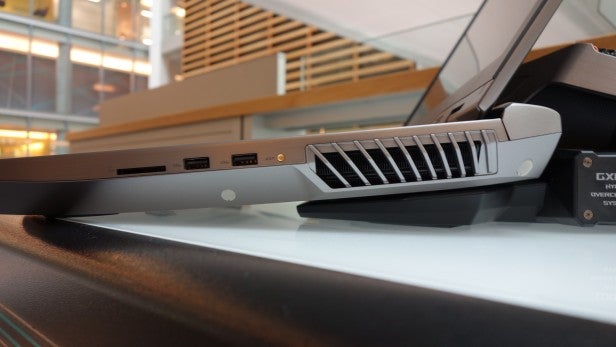 Unlike last year’s model, you need two beefy 330W power supplies to power the GX800 when it’s docked. Last year you needed just one that connected to the dock that powered both it and the laptop. They’re sizeable things weighing in at 1.3kg each, and you’ll need to take time to ensure the trail of wires doesn’t upset the aesthetic you’re going for with your new gaming setup.

Asus has gone all-out with the GX800. An obvious metaphor would be to call it a Hypercar of laptops: an expensive excess that evokes amusement and jealously in equal measure. In actual fact, it’s more like a monster truck: catastrophically powerful, comically large and ready to crush anything that gets in its path. I can’t wait to try the final version.