What is the Asus Republic of Gamers GT51CH?

The latest addition to the Republic of Gamers range is one of Asus’ biggest-ever desktop PCs. The GT51CH is a 23kg monster that mixes high-end components with incredible aesthetics, but it arrives with a bank-busting price of £2999 – and I’m not sure it can justify that figure.

This computer is a beast. Its front panel is made from a sloping gunmetal material, with a bright RoG logo positioned between two illuminated slashes.

That’s an impressive start, but the front is dominated by a circular addition at the bottom of the panel. It’s a recessed area ringed with burnt orange plastic, and it has its own LEDs – so it glows like Iron Man’s Arc Reactor. It isn’t simply a visual touch, however – the round entryway ushers air towards the Asus’ only intake fan, and then into the rest of the PC.

The Asus is no less impactful elsewhere. The side panels are decorated with chunky, angled bits of plastic, and the top is covered with the Mayan-inspired pattern that’s used across the entire RoG range. The machine slants all the way down its 584mm depth, and it’s 587mm tall.

Build quality is exceptional. The plastic and metal used to construct the GT51CH is rock-solid, from the metal frame to the plastic that makes up the front and roof panels. The sides are thick, and the window is made from sturdy perspex.

The side panels can only be removed with three conventional screws, which is trickier than using thumbscrews or handles. That’s irritating – and the interior continues to annoy.

For starters, the metal inside isn’t painted black – it’s just left unfinished. And there’s plenty of it, too: a huge, chunky cage to hold hard disks sits on top of a metal-and-plastic construction to aid airflow, and the skeleton around the outside is unusually thick.

There’s no shroud across the power supply area, and the power supply itself unleashes ugly cables across the rig – some are covered with black netting while others are just multi-coloured. The two graphics cards are hidden behind unsightly metal bars, and the hard disk bays are filled with underwhelming, tool-free bays made of plastic.

There are four of those hard disk bays free, an empty M.2 connector at the bottom of the motherboard and two vacant memory slots, but that’s it for expansion. The empty PCI slots are virtually impossible to reach, and there aren’t any other spare connectors. 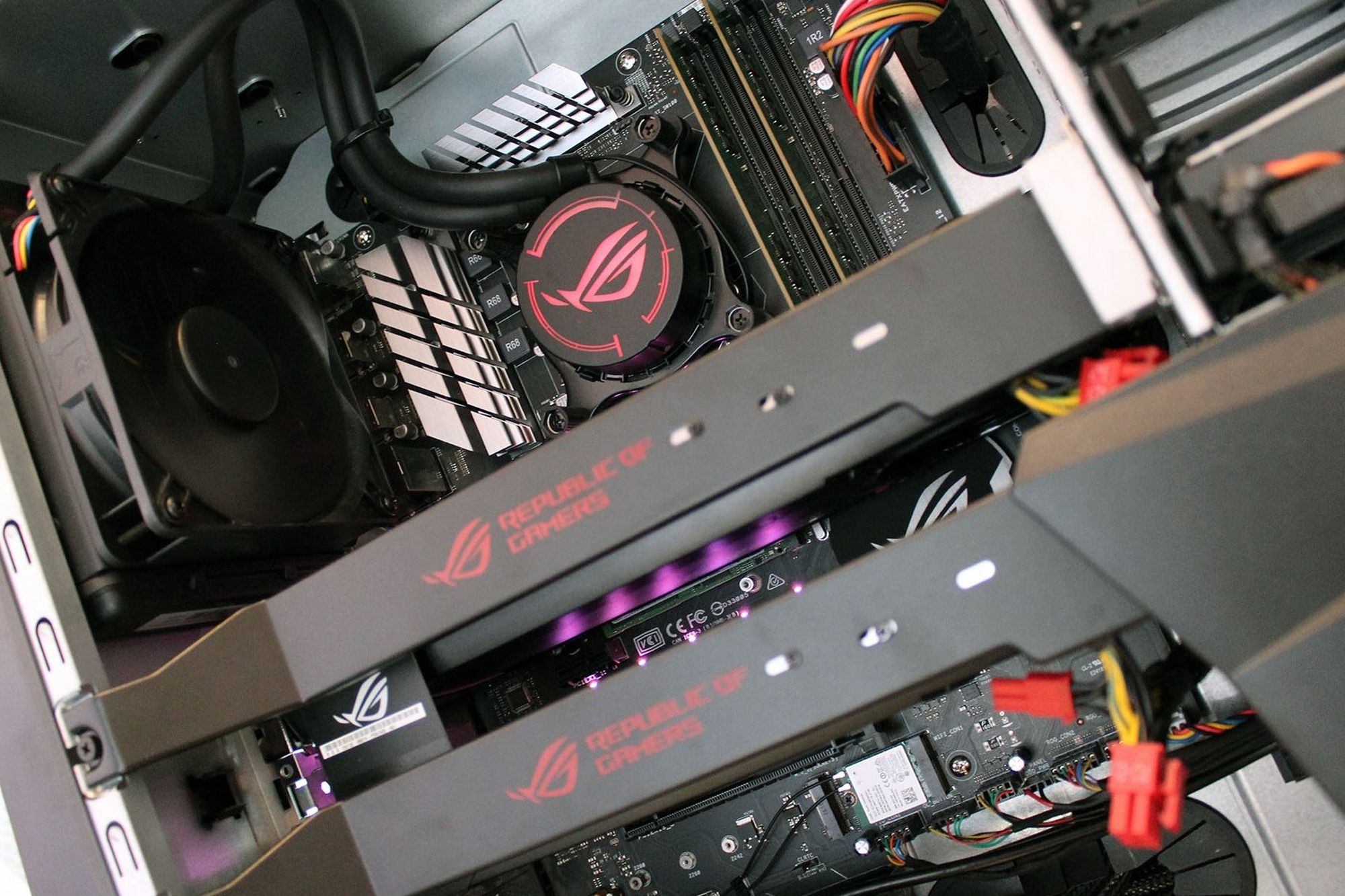 It’s possible to upgrade the storage and memory without voiding the warranty – but that’s it. The situation isn’t much better when it comes to overclocking. You can tweak the CPU using Asus’ pre-installed Aegis 3 app, but any other alterations to the CPU or graphics card are barred.

The Asus’ biggest mainstream rival is the Alienware Aurora. It looks similarly outlandish, and it’s smaller than the Asus – just 472mm tall and 360mm deep – and therefore easier to accommodate. The Alienware looks smarter and more subtle than the Asus, but the interior is necessarily more cramped. Despite that, clever design means the Alienware still has as much upgrade potential as the Asus.

Of course, the Asus isn’t only rivalled by high-street names; the British PC industry provides numerous challengers. Companies such as Scan, Chillblast, CyberPower and PC Specialist sell systems with this sort of specification for hundreds of pounds less – or its possible to get even more bang for your buck at the Asus’ price.

Scan’s 3XS Carbon Aura, for instance, costs £2750 and includes an overclocked GTX 1080 Ti, an overclocked eight-core Intel Skylake-X processor, faster memory, similar storage and a fully featured motherboard – and those components are packed into a smarter, more versatile case and protected with a superior three-year warranty.

The Chillblast Fusion Hellfire 3 is another tempting system. It costs £2600 and includes two GTX 1070 graphics cards alongside a Skylake-X processor with better cooling, plenty of memory and a packed motherboard. The Chillblast also comes with a better case and a far better warranty – the Hellfire offers a five-year deal.

These better rigs are hardly unique to those two companies. Every one of Britain’s more established PC builders will sell a machine with a greater number of features and more power than the Asus, often at a better price, and with a superior warranty too. With the Asus, then, you’re certainly paying for speedy delivery The GT51CH will ship directly from retailers, pre-assembled whereas custom rigs like the above could take a few days to assemble. You’re also shelling out for the ROG brand, which isn’t entirely unjustified. But only hardcore Asus fans will appreciate the design touches on this machine. 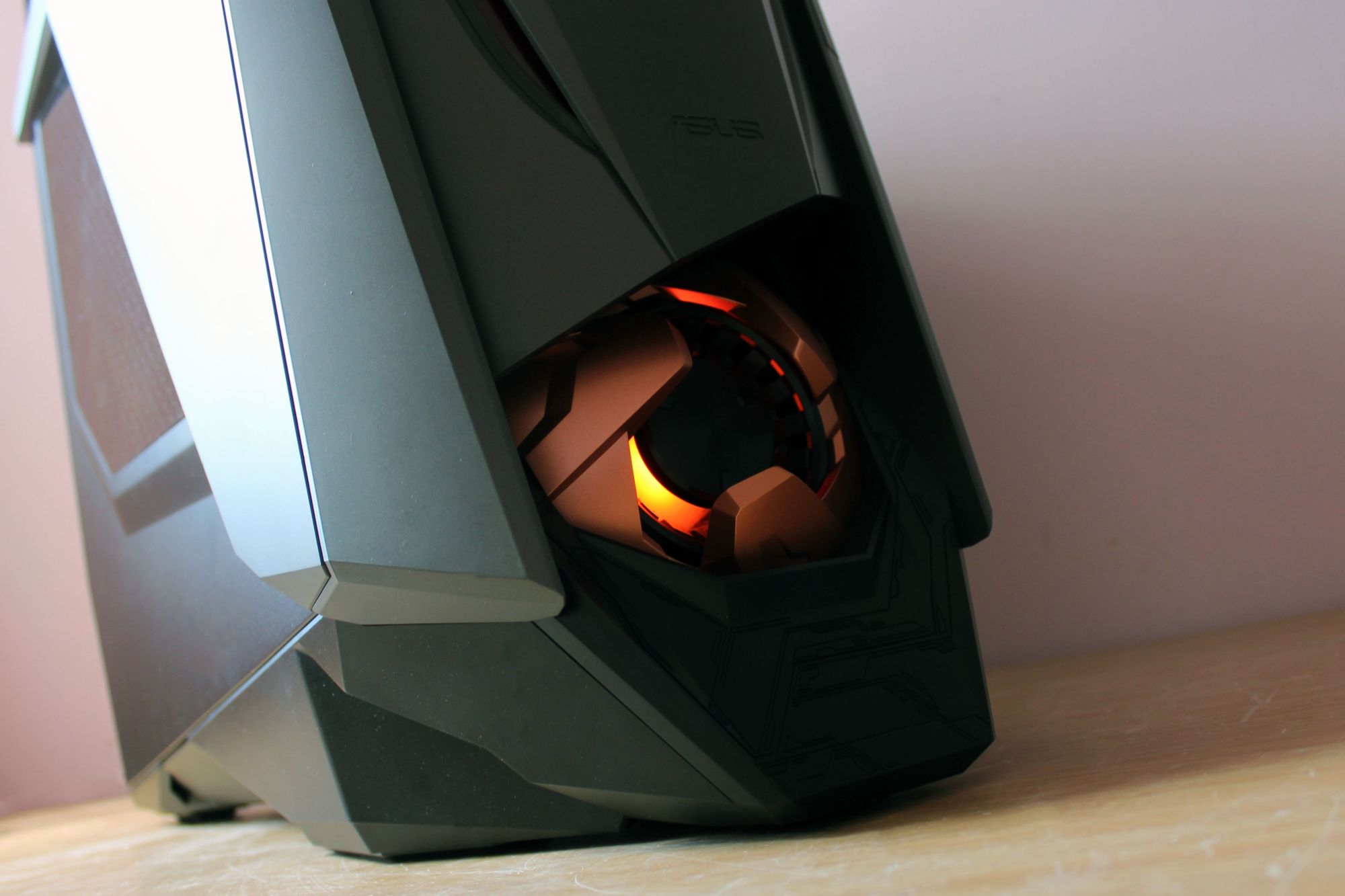 If you’re feeling confident then you might consider building a better system yourself, saving plenty of cash while doing so. I priced up a machine with the same core specification as the Asus, but with better cooling, a superior motherboard, quicker memory and a more reputable PSU. I also included a smart, more conventional ATX case, with options of a rig with two GTX 1070s and a single GTX 1080 Ti. The prices ranged between £2065 and £2266.

The Asus’ key hardware is a pair of GTX 1070 cards. They use Nvidia’s Pascal architecture, which offers improved efficiency and performance, and each chip wields 1920 stream processors and 8GB of memory – so there are some formidable numbers when the two cards are combined.

The GPUs used here only run at their stock speeds, though, which means the base and boost clocks sit at 1506MHz and 1683MHz. That’s a tad disappointing when Asus produces so many exciting, overclocked cards under the ROG name.

They’re not the best-looking GPUs – they’re modelled on Nvidia’s metal Founders Edition cards, but without many of the visual flourishes.

The two GTX 1070s have enough power to play any game at any resolution. I tested the Asus with six games at their highest settings and at 4K, and the weakest average was a 51fps result in Fallout 4 – and its best was a 91fps pace in Middle Earth: Shadow of Mordor.

That’s great, but those results come with caveats. The first is the Nvidia GeForce GTX 1080 Ti, which is found inside most rival systems at similar prices – including the Alienware when it’s priced up to around £2,500 with every other component matching the Asus’ specification.

The GTX 1080 Ti offers comparable pace to the two GTX 1070s. Take the Scan 3XS Carbon Aura, which I mentioned earlier – it was faster in Battlefield 1’s 4K benchmark by 17 frames, a single frame faster in Shadow of Mordor and Witcher 3, and only a handful of frames behind in Crysis 3 and Fallout 4. 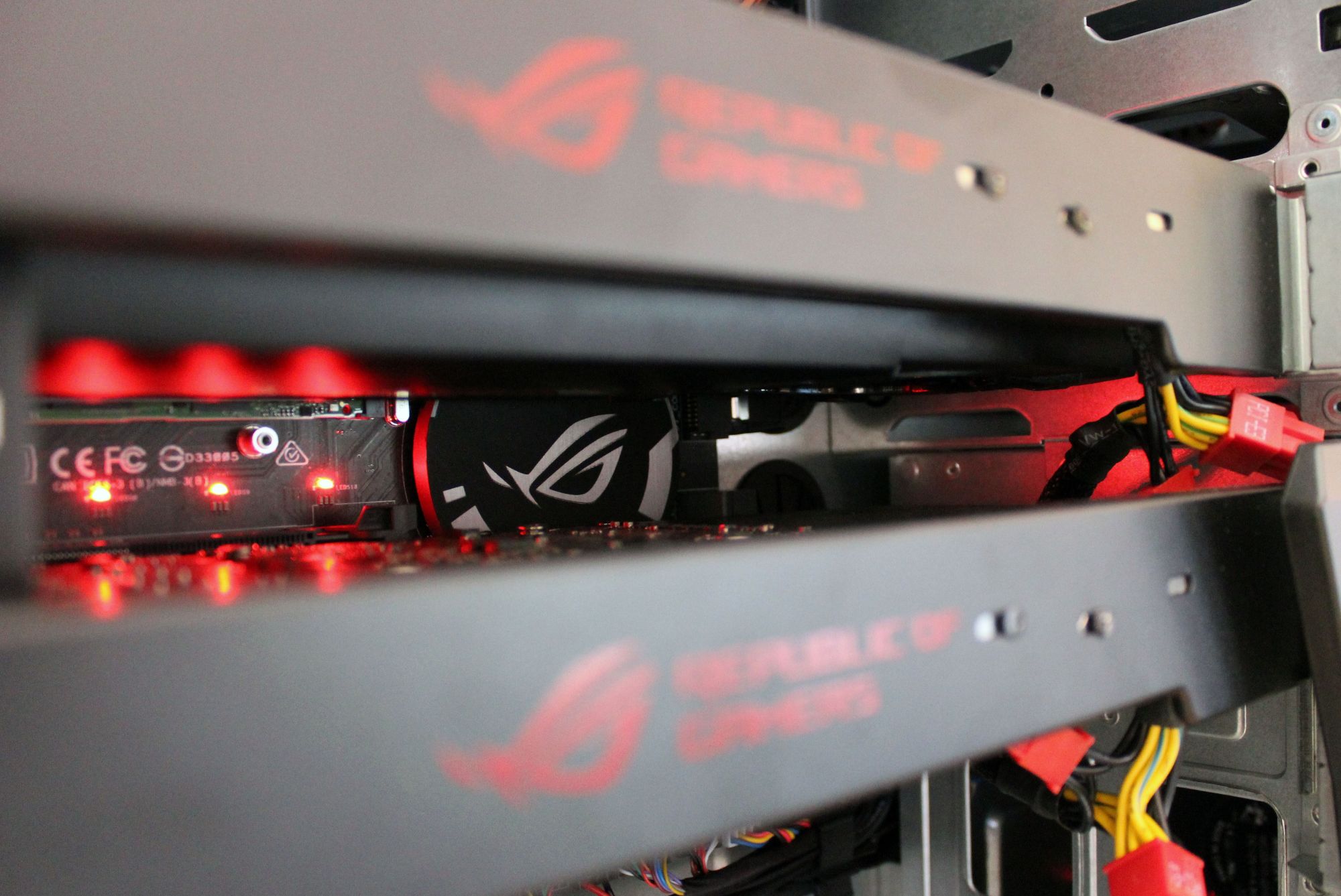 The second caveat is the GTX 1070’s patchy SLI performance. The dual cards in this machine never achieved flawless scaling: when compared to a single GTX 1070, the Asus improved its benchmark results by between 38% and 93% across five of my games tests, with an average of 76% across those titles. You can’t ever expect a perfect doubling of performance with two GPUs, but nonetheless, doubling up on GPUs feels like a false economy.

Processing power comes from a Core i7-7700K. It’s a solid chip with four Hyper-Threaded cores, but here it arrives at its stock speed of 4.2GHz. It’s possible to use the Asus Aegis tool to overclock the CPU to 4.8GHz, but that’s the kind of tweak applied as standard by many British PC builders.

It also looks a bit old-hat in the current market – and even more so in a PC that costs a penny shy of £3000. Intel’s new Skylake-X chips have six cores or more and appear in similarly priced machines, and AMD’s Ryzen parts tend to match Intel in multi-threaded tasks.

Related: The Best CPUs for Gaming at Every Budget

The Asus’ stock-speed processor returned a solid score of 4956 in the PCMark 8 test – fine, but no better than other gaming desktops.

Its results of 5373 and 17,741 in Geekbench 4’s single- and multi-core test are similarly acceptable: ample for ploughing through any game or application, but they look a bit tired now that Ryzen and Skylake-X rigs are now sailing past 20,000 points or even heading to 30,000 in the latter benchmark.

The Asus’ built-in 4.8GHz overclock didn’t make much difference to performance, either. With that tweak applied the multi-core score improved to 17,921 points – hardly a stellar leap.

The Asus combined its middling application performance with disappointing thermal results. The GT51CH has Silent and Performance fan modes, and it remained reasonably quiet during idle testing and when running a games benchmark – but push the processor and it all begins to go wrong. 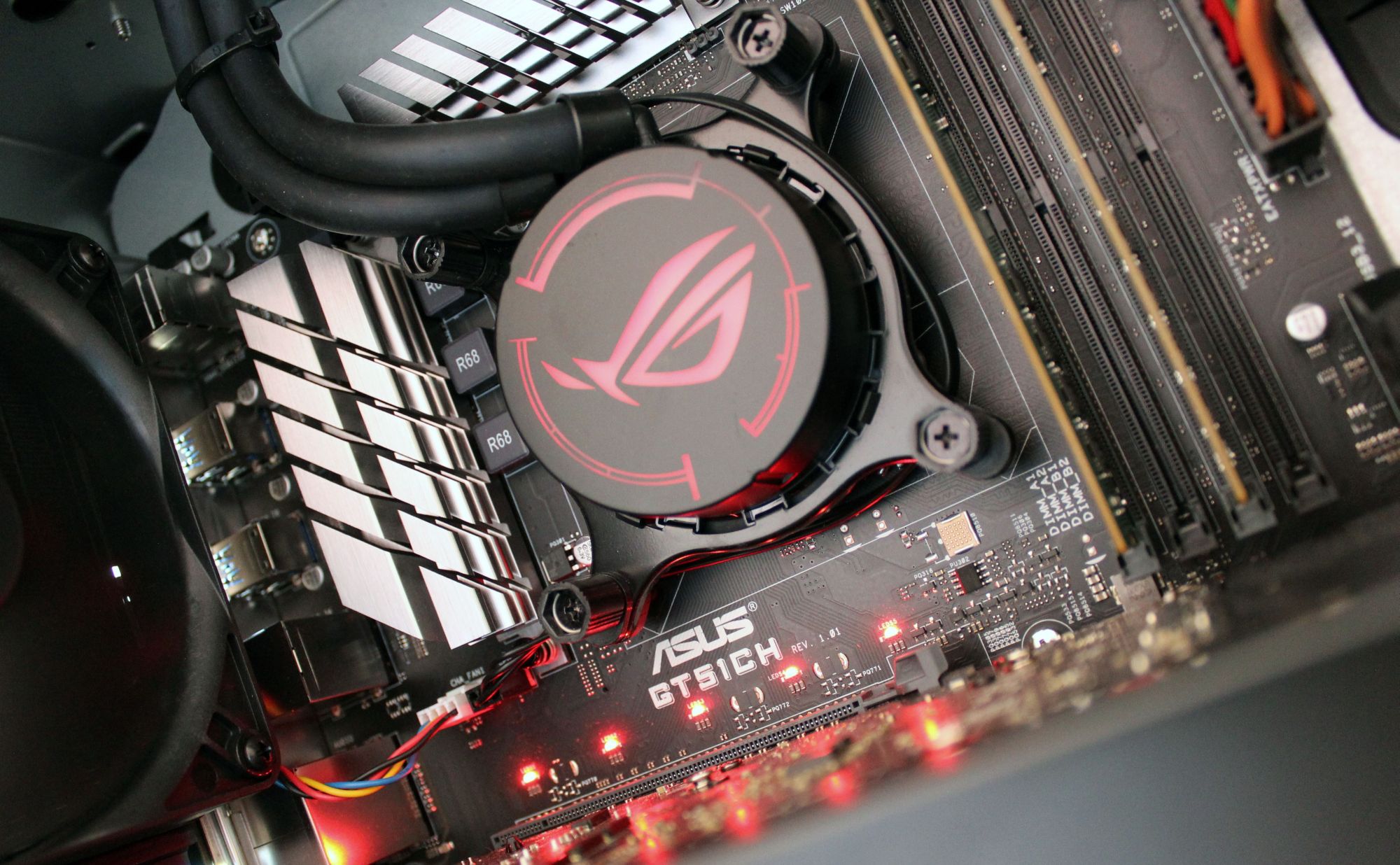 It’s hot, too. The processor peaked at 90°C when running at normal speeds and was four degrees hotter when overclocked. Both figures are too high, and they’re also loftier than most gaming machines with beefier CPUs and more ambitious overclocks.

It’s easy to spot the problem. The Asus’ single intake fan sits at the bottom of the case, and it delivers cool air to the two GPUs – but there’s no real way for fresh air to get above the cards, to the modest 120mm processor cooler.

The rest of the specification is fine, if uninspired. There’s 32GB of memory, which is too much for a gaming system – most titles just won’t use it. It also runs at 2,400MHz, which is slower than most high-end gaming rigs.

The motherboard is an eponymous Asus model that only ticks the bare minimum of boxes. Its PCI slots and SATA connectors are tricky to access, and it has only a handful of RGB LEDs around its main graphics sockets.

There are no interesting heatsinks, nor any on-board displays or buttons. That’s understandable, because this isn’t really a PC for tweaking, but I wish it would have looked better – it would have been a more interesting sight through the side panel’s tinted window.

The entire rig is powered by a 700W AcBel unit that continues the disappointing theme. It has an 80Plus Silver certification and it isn’t modular – and I expect better from a £3000 system.

The Asus rig will play any game at 4K, across multiple screens or on a VR headset, but the two GTX 1070s aren’t able to outpace a single GTX 1080 Ti, and SLI proves inconsistent. 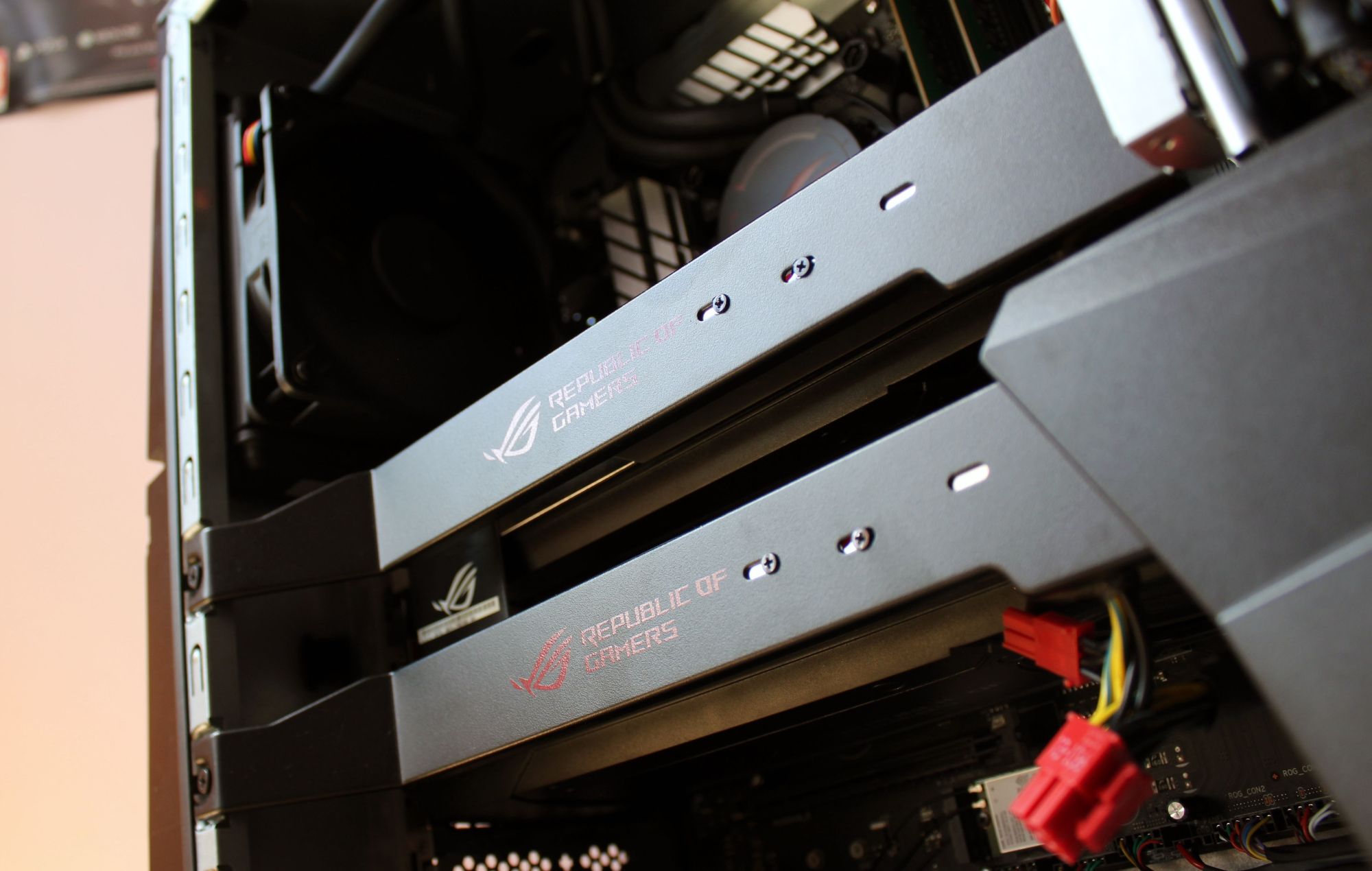 The processor proves underwhelming, too, with middling benchmark results that are undermined by poor thermal and aural performance.

Should I Buy the Asus Republic of Gamers GT51CH?

Probably not. Asus has tried to build a money-no-object gaming system with the Republic of Gamers GT51CH, but it falls short in many crucial areas.

Its two graphics cards don’t deliver a convincing boost over the GTX 1080 Ti – indeed, the GPUs are slower in some cases – and the Core i7-7700K can’t compete with today’s best overclocked and updated machines. The rest of the components are underwhelming, and the cooling hardware can’t keep up – the CPU becomes too hot, and the machine is noisy. The case is huge, heavy and its features are disappointing.

Unless you’re committed to the Republic of Gamers brand, or love this machine’s looks,  there’s no reason to spend so much on such a poor system. The GT51CH may have been designed to provide an easy, off-the-shelf gaming experience, but that doesn’t mean it can get away with being so mediocre in so many areas.

Asus’ latest machine looks outlandish and proves underwhelming in the important areas – and at £2999 it’s expensive. For that money you’d do better to look elsewhere.