Bearing the high-end Republic of Gamers (ROG) brand, the latest laptop from Asus promises to play “top games” at 1080p without a hitch – but, unusually, costs less than £1,000.

In addition, Asus isn’t only pitching the GL552V at gamers, it has its eye on creatives too. That’s no surprise, given the amount of power inside this system.

Asus gaming hardware is always keenly designed, with a good balance between gaming laptop excess and smart subtlety. The GL552VW is no different. The lid is made from dark, mottled plastic, with a brushed metal centre-panel that’s home to the Asus and Republic of Gamers logos.

The metal throughout the GL552V’s interior is black, while the Republic of Gamers logo, keyboard backlighting, letters and trackpad surround are all red. The area above the keyboard is decorated with a lined pattern that Asus says is inspired by Mayan designs. It’s not the first time that Republic of Gamers’ hardware has been inspired by South American tribes – the Asus G20 system was covered with similar patterns. 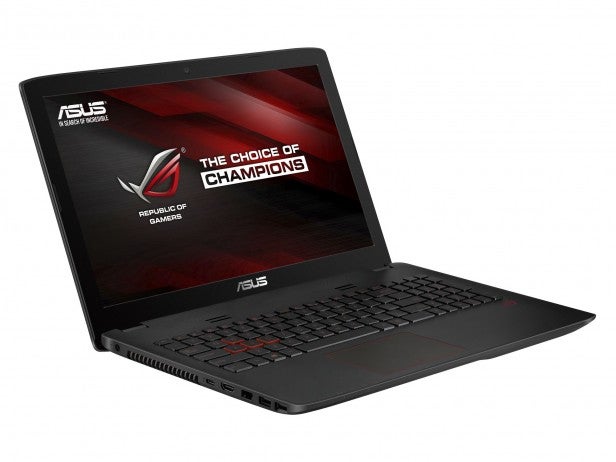 It’s a good look, and Asus has managed to load the design comes with impressive connectivity options. The left-hand side is home to two USB 3 ports, an HDMI output and a USB 3.1 Type-C socket, and the right-hand edge has USB and audio connectivity and a DVD drive. A panel on the base pops off for access to the SSD, hard disk and memory, and one memory slot is vacant. The battery is removable.

The GL552V’s budget price only becomes apparent when considering build quality. The underside is inconsistent, with some solid areas and others that flex under pressure. The keyboard and wrist-rest are fine, but the rear of the screen flexes back and forward, and movement on most areas of the panel cause the desktop itself to distort.

These are similar issues to those affecting Asus’ affordable rivals. The CyberPower Fangbook SX6-300 has build quality niggles in the same vein, and the MSI GE72 2QD-037UK suffers poorer overall build quality than both those machines alongside alarming wrist-rest flex. Both rivals cost around £1,000.

So far, so good – or, at least, as good as I can expect from a sub-£1,000 gaming laptop. The laptop’s worst design issue is its size and weight. The machine is 35mm thick and weighs 2.6kg. That’s a few hundred grams heavier than its rivals, and 8-9mm thicker. Although neither issues are a deal-breaker, they’re worth considering if the laptop will be frequently carted about. 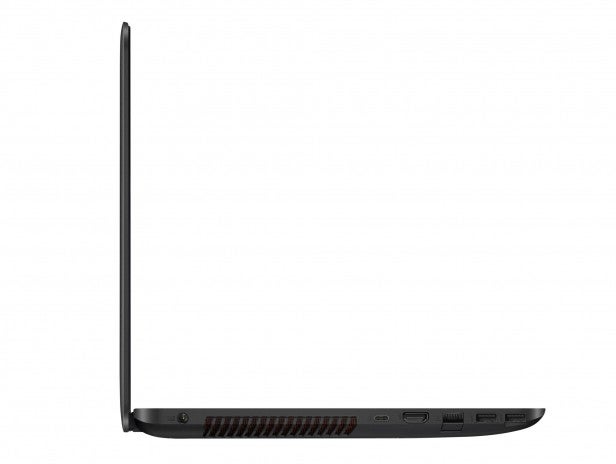 The Asus GL552V comes with a more sensible price than many rivals, but that does mean more modest specifications. Gaming grunt comes from the GeForce GTX 960M, which sits in the middle of Nvidia’s mobile range. It’s based on the desktop range’s GTX 750 Ti and includes 640 stream processors, 2GB of dedicated memory and a 1,176MHz average clock. That’s decent – the same as the MSI – but the CyberPower includes the GTX 970M, which has 1,280 stream processors and 3GB of GDDR5.

8GB of memory is plenty, although here it’s installed in a single-channel configuration. That’s a double-edged sword: the single stick means it’s simple to upgrade, but it won’t be as fast as two 4GB modules running in dual-channel mode.

Storage is divided between an 128GB Hynix SSD and a 1TB hard disk. That former component uses the M.2 interface, but don’t expect fast speeds – it still relies on SATA bandwidth, rather than the quicker PCI Express interface. 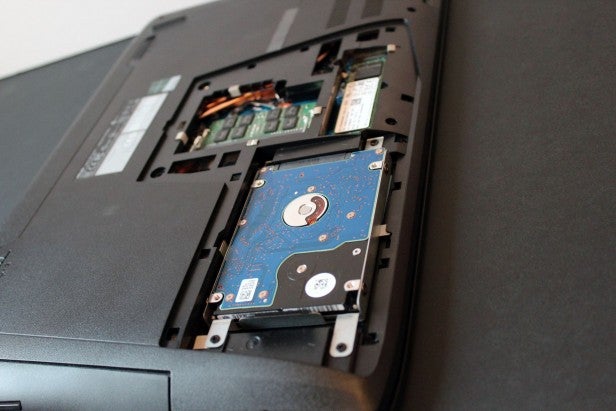 Asus has included several bits of software. The most important is the ROG Gaming Center, which collects system information, allows profile switching and launches other utilities.

Four profiles are installed by default – for sports, driving, strategy and FPS games. These switch between different screen and sound modes: some make the panel vivid, while others switch the audio to settings like “war room” or “battlefield”.

The ROG GameFirst III app can be launched from inside the Gaming Center. It’s a small tool that measures network speed and optimises traffic for games, media streaming or file-sharing. There’s a link to the Asus Splendid app, which can be used to switch between screen profiles, and an option to load the ROG Audio Wizard, which functions similarly for the audio.

The Asus Giftbox is a front-end for apps such as TripAdvisor, McAfee LiveSafe and Flipboard, and in other areas I found a Candy Crush game, Dropbox, Evernote and Netflix – so, depending on the user, software of varying usefulness.