The first 3DMark result indicated the kind of performance to expect from this machine. In the app’s Ultra test, it scored 5349 points. That’s one of the best scores I’ve ever recorded from a laptop, and it’s also better than most of the desktops I review.

That stellar score translated to stonking real-world games performance. I ran Middle-earth: Shadow of Mordor at its Ultra settings and the Asus returned an average of 163fps; in Tomb Raider it hit 97fps. 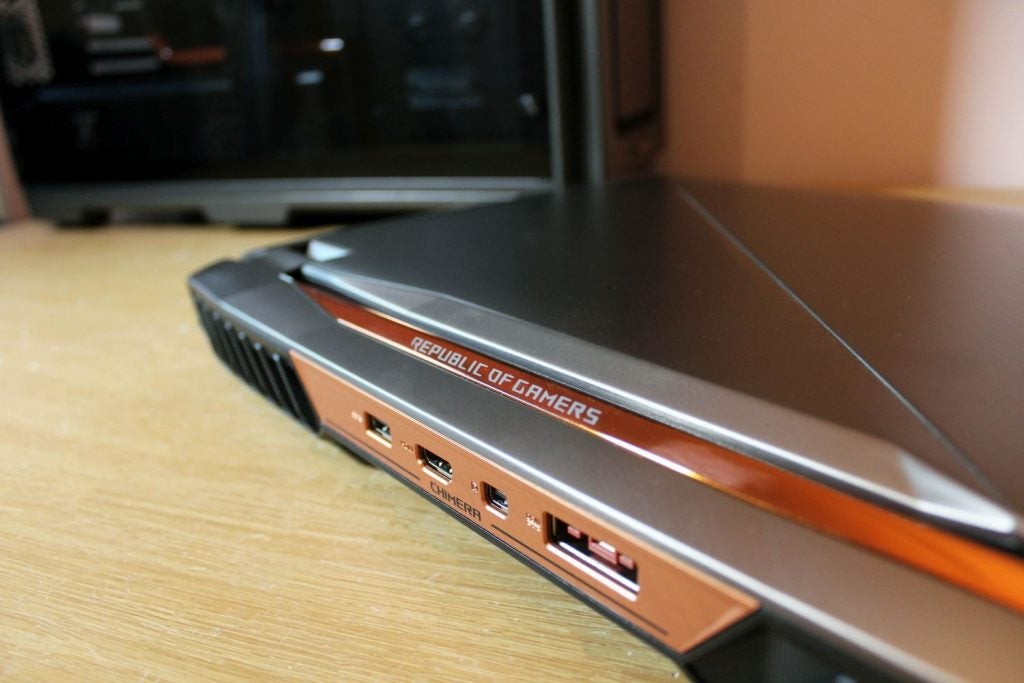 The Asus handled other demanding games, too. It romped through Total War: Warhammer at 114fps, and it handled the ultra-intensive Deus Ex: Mankind Divided at 74fps.

The Asus also has the power to output to VR headsets and larger-resolution panels, although it will likely struggle a little with 4K.

The graphics card isn’t the only overclocked component. The Core i7-7820HK is one of Intel’s only unlocked mobile processors. Asus has taken this quad-core, 2.9GHz processor and boosted it up to 4.3GHz. It’s paired with an impressive 32GB of memory, clocked to 2400MHz.

Not surprisingly, the G703 delivered superb application performance. Its single- and multi-core Geekbench results of 5266 and 17,409 are some of the fastest I’ve ever seen in a laptop, and the Asus then scored 5579 in the PC Mark 8 benchmark – another excellent result.

Suffice to say, the overclocked processor won’t bottleneck any games. It will also happily handle productivity tasks, from streaming to photo and video creation. The SSD does its part, with solid read and write speeds of 3269MB/sec and 1699MB/sec.

And, while the Asus has high-end components inside, its size and construction meant that it performed reasonably well in thermal tests – an area where many gaming laptops fall short. During the toughest stress-test, the CPU and GPU peaked at 93°C and 81°C. During this test the laptop remained cool, and the fan noise was modest.

The CPU and GPU reached 87°C and 80°C during an extended gaming test, and the exterior and noise performance remained at decent levels – certainly cooler and quieter than almost any rival. The Asus didn’t suffer throttling issues during any of these tests: the CPU ran at 3.5GHz when it was at load and at 4.3GHz during gaming benchmarks, and the GPU sat at a consisted 1950MHz. The only issue was heat ejection from vents on both sides of the system, which could prove a little uncomfortable if you’re using a USB mouse. But even then, I’ve tested laptops that have been worse in this regard.

One area where you shouldn’t expect great things is battery life, however. The G703 lasted for around an hour in a gaming test – about average for a powerful gaming laptop.

The G703 is governed by the Asus Gaming Center tool. I’ve already mentioned its various screen modes, but there’s plenty more available in this utility. It can switch the CPU and GPU between their default Extreme clock modes and slower Standard options, and it monitors the clock speeds, temperatures and fan speeds of all the vital components. It has options for fan customisation, audio tweaks and networking tools, and an app can be used to manage the laptop from your Android or iOS smartphone.

Not many new gaming laptops are as bulky as the Asus ROG G703, but this model’s sheer size and weight aren’t necessarily a bad thing.

The G703’s build quality is rock-solid, it offers plenty of ports, and its keyboard is better than most rivals. The Asus’ size also ensures it copes well with the powerful components inside – it’s certainly cooler and quieter than the vast majority of gaming laptops.

Indeed, this machine’s biggest issues are its size and its price. If either is going to be a problem, then the rest of the market is amply stocked with laptops that are slimmer, lighter and cheaper, with inevitable compromises on quality.

If you’re after the best and don’t mind spending a tidy sum, though, the G703 is superb.

The Asus ROG G703 is a large and imposing laptop, but it’s a superb choice if you’re not willing to make any compromises.