The latest laptop from Asus is a gaming product that doesn’t focus on slim design or a lightweight build.

Instead, the Asus Republic of Gamers G703 priority is performance. This device is huge, heavy and expensive, featuring desktop-class components and a £3,100 price tag.

The G703 is an eye-catching machine. Most of its body is made from a mix of gunmetal aluminium and matte-black panels, with sharp angles and straight lines dividing the different shades. 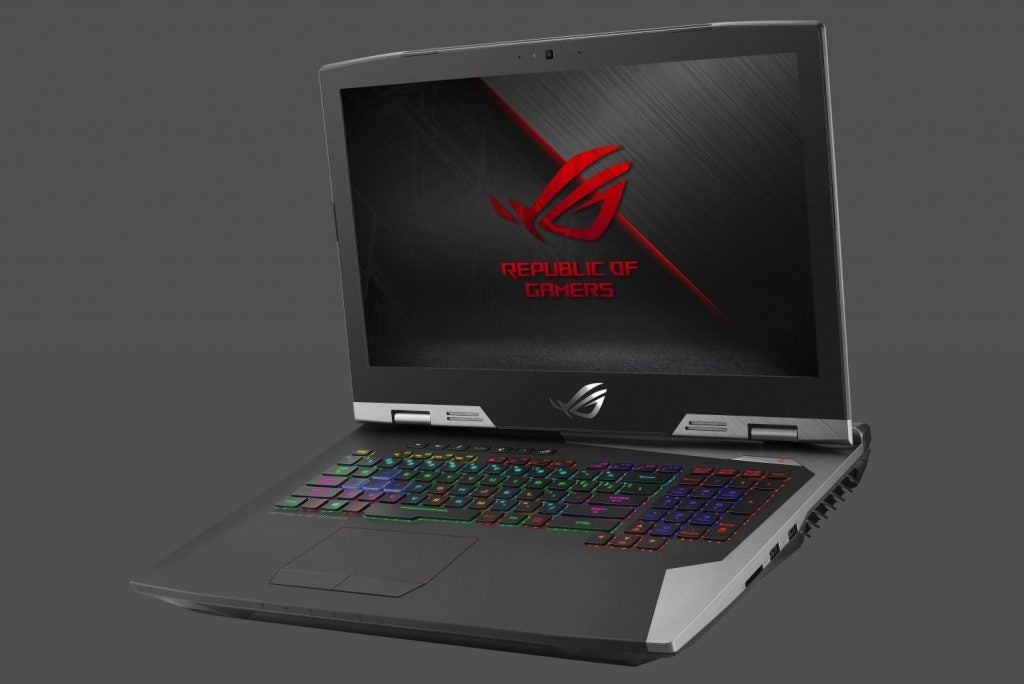 The two-tone body is augmented with brighter colours. The keyboard and large ROG are underpinned by RGB LEDs, and the back of the machine features shiny, burnt orange panels.

The G703 looks the part, and its striking design is paired with huge dimensions: it weighs a whopping 4.8kg and is 50mm thick. The G703’s heft does translate to excellent build quality, but it also means that you’ll need a sturdy backpack and some solid shoulder muscles to lug this machine to LAN parties.

Its generous proportions mean that the G703 has plenty of room for ports. These include four USB 3.1 connectors, a USB 3.1 Type-C jack, mini-DisplayPort, Thunderbolt and HDMI outputs, a card reader and even a built-in Xbox wireless receiver for gaming with multiple controllers. On the inside, there’s dual-band 802.11ac wireless, Bluetooth and Gigabit Ethernet. 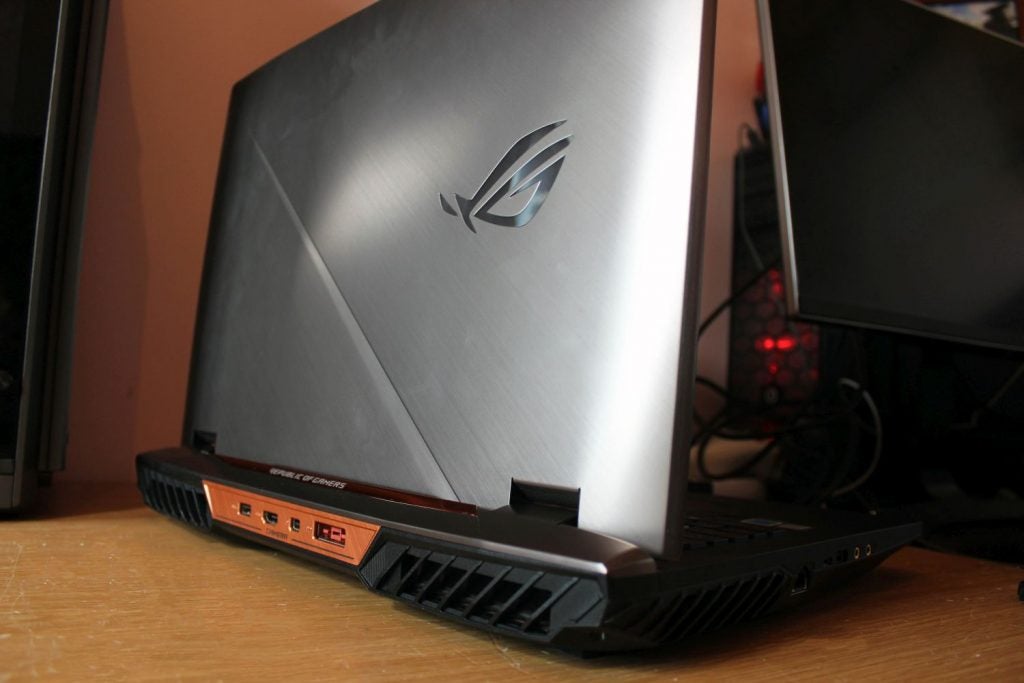 Internal access is good, too. Only a single screw needs be removed from the bottom panel to access to two spare memory slots, two free M.2 connectors and all of the existing storage.

The G703’s size and sturdy build make for a solid base for the keyboard. There’s absolutely no give, which is good for hammering away during gaming sessions. The keys themselves offer 2.5mm of travel – a little more than most gaming laptops.

The typing action is consistent and reliable, and the layout is good: there’s a separate number pad, sizeable keys throughout, and a little extra highlighting on the WASD buttons. An extra row of buttons sits above the keyboard, with shortcuts to open the Asus Gaming Center app, XSplit Gamecaster, the Xbox Gamebar and the machine’s lighting settings.

The firm base and extra travel make the G703’s keyboard one of the best I’ve ever used on a gaming laptop – especially since almost all rivals use chiclet keyboards. It’s certainly robust enough to handle FPS gaming, MOBAs and other frantic competitive titles. 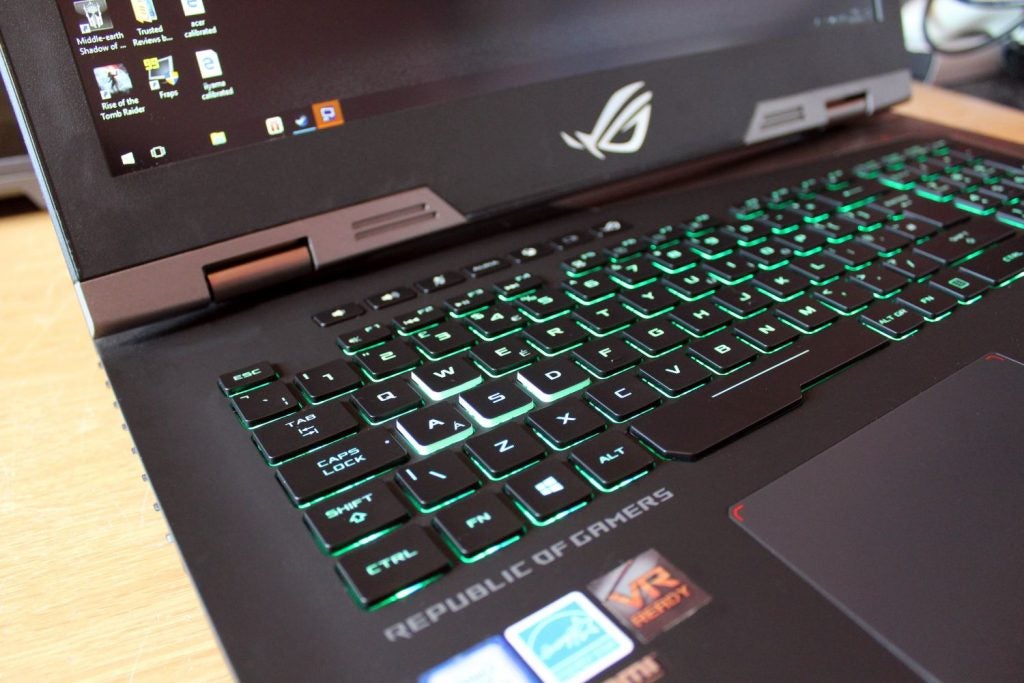 However, there’s no doubt that mechanical keyboards are still king when it comes to gaming, thanks to their extra strength, deeper travel and firmer action. If that’s a deal-breaker for you, a machine such as the Aorus X9 could be your only hope until Cherry’s new low-profile keys make their way to more laptops.

It’s a similar tory with the trackpad. It’s good, with buttons offering reasonable snap and a light touch, but a proper mouse will be more responsive, with shallower buttons and thus greater precision. And, of course, it’s easier to attach a mouse to this machine than a keyboard.

The G703’s 17.3in IPS screen presents solid gaming credentials. It has Nvidia G-Sync at a peak of 144Hz, and the native resolution of 1080p is entirely fine.

Other laptops have higher figures, sure, but those are often moot when a 1080p resolution looks sharp enough on a notebook. I’d rather have a 144Hz refresh rate with G-Sync than a few extra pixels anyway, and the G703’s GTX 1080 graphics core will run games smoothly at this machine’s resolution and refresh rate.

The solid screen specification is paired with decent benchmark results. The brightness level of 269 nits is enough to handle home and office lights, and the black level of 0.21 nits is deeper than most gaming laptops can offer – so dark areas in games will have plenty of depth. 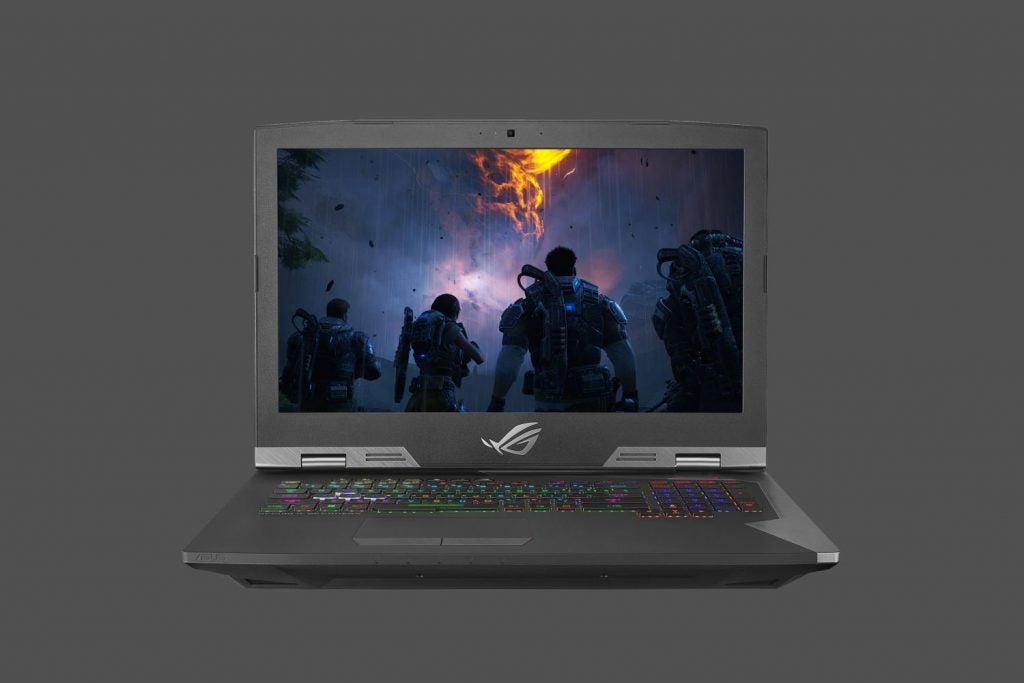 Those figures create a contrast ratio of 1278:1. That’s better than most gaming devices, and that creates solid depth and distinction across every part of the panel. No matter the colour palette your games use, they’ll look punchy on this screen.

The great contrast is paired with consistent uniformity and viewing angles. Colours, meanwhile, are fine – the average Delta E of 4.1 isn’t ruinous, and the colour temperature of 7573K is cool without proving problematic. It covered around 96% of the sRGB colour gamut.

In fact, the only area where this screen falls seriously short are the various screen modes. They’re available in the Gaming Center app, and are designed to work with different genres. None of them are good: Racing mode ruins the contrast, and the Scenery option is too oversaturated thanks to a 1.89-nit black point. The FPS mode is similarly afflicted, while the RTS/RPG option is too dark.

The screen is accompanied by solid audio kit. The two 3W units produce ample volume and decent clarity at both the mid-range and high-end. There’s no subwoofer, meaning bass is a little weak, but these speakers are still good for a gaming laptop.