The GTX 1080 is a phenomenal mobile GPU. With this laptop’s standard mode selected its poorest average at 1080p was a superb 106fps in Dirt Rally – and so the other test games both ran at more than 100fps, too.

Those fantastic scores often accelerated when I activated the Asus’ Extreme performance mode. With this option selected the laptop’s Dirt Rally average framerate improved from 106fps to 124fps. In Middle Earth: Shadow of Mordor the Asus’ minimum jumped from 82fps and to 89fps.

They’re good leaps, but the Asus didn’t always improve – they often stayed static, or even declined a little.

Those scores also weren’t enough to beat the Scan 3XS LG17 Carbon Extreme, which pairs its GTX 1080 with a desktop Core i7 processor. The Scan was usually quicker than the Asus with the latter laptop running in its Standard mode, and the Scan maintained most of its benchmark leads even with the G701VI’s Extreme option selected. 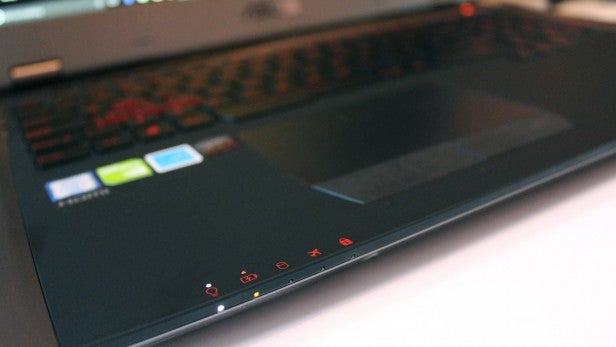 The Asus, then, is a very fast laptop – but it’s not the quickest GTX 1080 notebook I’ve seen. It’s fast enough to run games on its 1080p G-Sync panel at near to 120fps, and it’s fast enough to output to VR and 4K screens – but the 3XS notebook is a little faster.

The situation is similarly close in application tests. In Standard mode the Asus’ Geekbench single-core score of 4,095 was a little worse than the Scan, but it was slightly better in the multi-core test – perhaps because of this machine’s huge 64GB of memory.

Another pattern emerged in PC Mark 8, where the Asus beat the Scan in the easier Home test but fell behind in the tougher Creative benchmark. That’s because the Scan has that better desktop processor – and it means that the Scan will be better with more demanding workloads.

Tuning the CPU to Extreme mode didn’t make much difference. The Asus’ PC Mark 8 score of 4,796 only improved by five points, and its single-core Geekbench score rose to 4,205. The biggest jump came in the multi-core test, where the laptop’s original result of 15,656 boosted to 16,146 – further opening its lead against the Scan.

The Asus has huge processing power, but it only trades blows with the Scan: it’s a little better in some less intensive tests, but the Scan’s desktop CPU fights back when I use tougher benchmarks. Make no mistake, though – the Asus will plough through almost any CPU-intensive task. 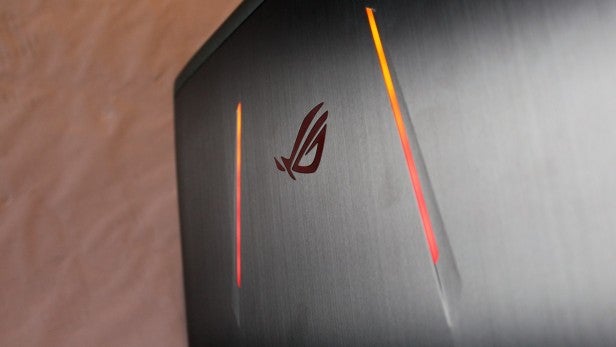 The G701VI is helped out by that huge RAM installation and its dual-SSD RAID array. The pair of Toshiba drives returned read and write scores of 2,791MB/s and 1,389MB/s. The former figure is one of the best I’ve ever seen, and it’s hundreds of megabytes better than the Scan – and the latter isn’t far behind the 3XS system. The Asus boots in seconds, and game loading times will be excellent.

The Asus’ inconsistent results continued in thermal tests. Its CPU peaked at 93 degrees, with the graphics core six degrees cooler. The former figure is a little better than the Scan and the latter is level with it, but neither figure is particularly good.

The Asus was also louder than the Scan – its high-pitched whine is more irritating than the Carbon’s low hum – and its exterior was hotter. The Asus never became uncomfortably warm, but it does mean it falls behind the Scan in this department.

The Asus has a 1080p IPS screen with 120Hz G-Sync. That’s a mixed bag when compared to the Scan – that laptop only had 60Hz G-Sync, but it did have a 4K resolution. Whichever screen you opt for, it’s a trade-off: games will look smoother on the Asus but not quite as sharp, while the Scan suffers with its poorer G –Sync but serves up better fine detail. 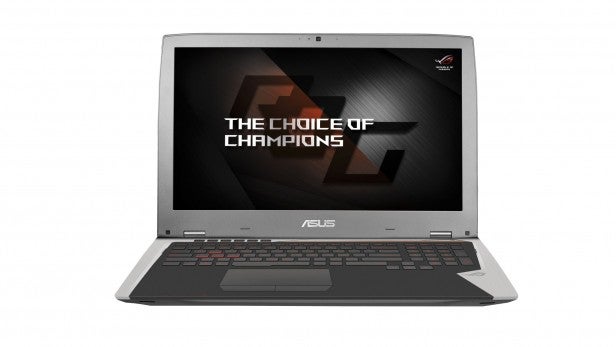 There are divisions in those specifications, but the Asus beat the Scan in most benchmark tests. It has Normal and Vivid screen modes, and its contrast ratio and black level of 1,260:1 and 0.25 nits was consistent across both modes – and better than the Scan, which managed 1,106:1 and 0.32 nits in the same tests.

That’s a good start for the Asus: it means that colours will be broader and more vivid across the range, and that dark shades will look deeper and more defined.

The Asus has better colour accuracy, too: its Normal Mode Delta E of 3.17 and Vivid Mode score of exactly 1 are both better than the Scan’s 4.46 average, and its colour temperature of 7,400k isn’t far removed from the Scan.

The Asus’ sRGB coverage level of 84% can’t match the Scan’s 100%, but that’s a minor issue when the Asus is better elsewhere. The two laptops offer similar uniformity, with a brightness deviation of around 10%. 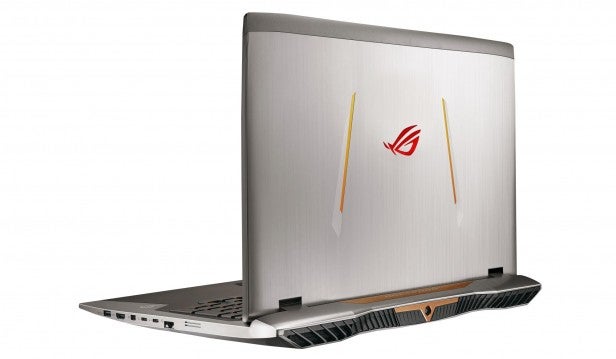 The Scan laptop has reasonable benchmarks and its 4K resolution, but I prefer the Asus – even though it’s just a 1080p panel. It delivers better G-Sync alongside superior benchmark results in most categories.

The Asus’ audio kit is good, too. The default Music mode has good balance, with decent bass and a snappy high-end. The Movie option is far too deep, while the Gaming setting has a prominent high-end but weaker sound elsewhere.

There’s little to choose between the Asus and Scan here: both are good, although the Asus is a tad quieter.

No surprises here: the Asus delivered mediocre battery life and it won’t change the perception of large gaming notebooks.

The Asus’ three-hour lifespan in the Powermark test is an hour better than the Scan, but it’s still merely mediocre. The Asus also barely handled an hour of gaming, so you’ll have to stay close to a plug socket. 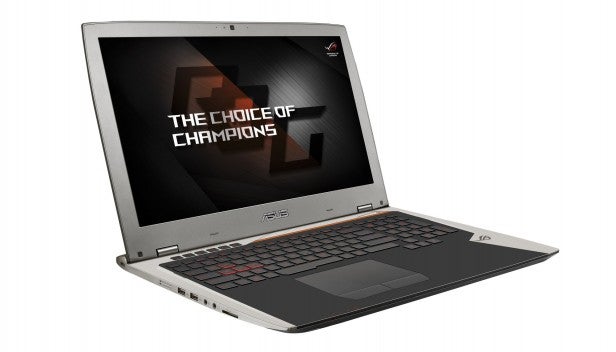 The Asus is crammed with high-end components, from the overclocked CPU and GPU to the huge memory loadout and dual SSDs. It has better G-Sync than its rival, and its exterior is slimmer, lighter and more stylish than Scan’s competitor.

Get a little closer to this machine, though, and its bombast fades away. The overclocked components don’t help this machine convincingly beat the Scan, which had the same GPU and a desktop CPU, and the memory is overkill. The SSDs are fast, sure, but few people will need that sheer speed – and there are no surprises in the battery benchmarks.

The slim exterior isn’t as sturdy as the chunkier Scan laptop, and that machine served up a better keyboard, better interior access and a better warranty. And while the Asus has better G-Sync and screen quality, the Scan is hardly bad here – it’s still got G-Sync, quality is still decent, and it’s a 4K panel.

This is an eye-catching laptop with an eye-watering price – but I just don’t think it justifies £2,880. It’s a good high-end gaming machine, but the subtle Scan is cheaper and offers more power and balance.

A great machine in isolation, but similar rivals offer more for less. If it comes down in price, however, it might be worth revisiting.