On paper the Asus’ GTX 970 card falls ahead of the Alienware but behind the Chillblast, and that’s what happened in the benchmarks.

The Republic of Gamers system never balked at 1080p playback. Its best result here came in Bioshock Infinite, where it averaged 111fps – forty frames ahead of the Alienware – and even in Crysis 3 it managed a smooth 71fps. That means essentially any game will be playable at this resolution.

The 2,560 x 1,440 resolution is tougher, but the Asus continued to perform with aplomb. It romped through Crysis and Battlefield 4 at averages of 42fps and 49fps, and hit 51fps in Middle Earth: Shadow of Mordor.

That’s better than the Alienware, which only managed 31fps in Shadow of Mordor, but it’s not as good as the Chillblast. The AMD-powered system scythed through Crysis and Battlefield at 60fps.

The Asus machine’s GPU is good enough for 1080p and 1440p gaming, but it struggles at 4K. Its only playable average came in Bioshock Infinite, where it managed 35fps – but its 20fps minimum means that gameplay won’t always be smooth. Its best result elsewhere came in Shadow of Mordor, but even then it could only manage 27fps.

This category is really where the Chillblast machine pulls ahead. That system managed 32fps in Battlefield at 4K, and then 45fps in Shadow of Mordor – it only faltered in Crysis with an average of 27fps. It’s not a clean bill of health, but the Fusion is at least capable of playing at 4K with minimal graphics settings – whereas the Asus will struggle in the vast majority of top-tier games unless graphical fidelity is severely compromised. 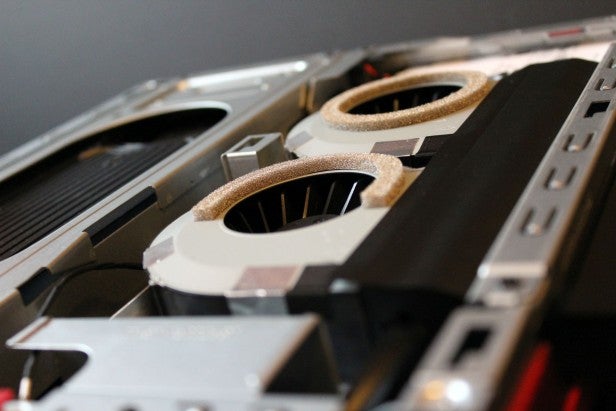 The Asus proved middling in theoretical tests, too. Its Unigine Extreme average framerate of 52.2fps is around ten frames behind the Chillblast, and it scored 9,578 in the 3D Mark Fire Strike test – good, but almost 3,000 points behind the Fusion Fury Nano.

The stock-speed Core i7 processor is fine, but it’s unable to keep up with either of its rivals – unsurprising, given they both boast that K-edition chip.

The Asus machine, at least, never gave us problems in thermal tests. The processor’s peak temperature of 82 degrees is fine, and the graphics card peaked at 79 degrees. The processor temperature in particular is good – the Chillblast machine’s CPU was far hotter.

Asus makes big claims about this machine’s noise output, and I’m pleased to report that the G20CB delivers. When games aren’t running it may as well be silent – I had to press my ear against the case to even make out any fan noise.

It’s not much louder during games; there’s a little whirr that’s louder than the idle noise, but it’s as quiet as the consoles, which also means it makes less noise than most gaming systems. If it’s placed in a living room it’ll certainly be discreet.

I only hit issues during a stress-test of the processor and graphics card. Here the Asus produced a higher-pitched whine that’s louder than consoles, but it’s unlikely that this machine will ever run at 100% load for a significant length of time.

The final tests examine the storage. The Asus has a 128GB Hynix SSD on-board, but it failed to impress in benchmarks. Its sequential read score of 485MB/s is about what I expect from a modest SSD, but its write pace of 176MB/s is dreadful – barely better than normal hard disks.

It’s a long way behind rivals. The Alienware and Chillblast machines both deploy Samsung M.2 SSDs, and both excelled: those drives delivered reads beyond 1,500MB/s, and the Chillblast hit 1,196MB/s in the file write benchmark.

In practical terms, those results will make the Asus noticeably slower to respond when loading games and booting. 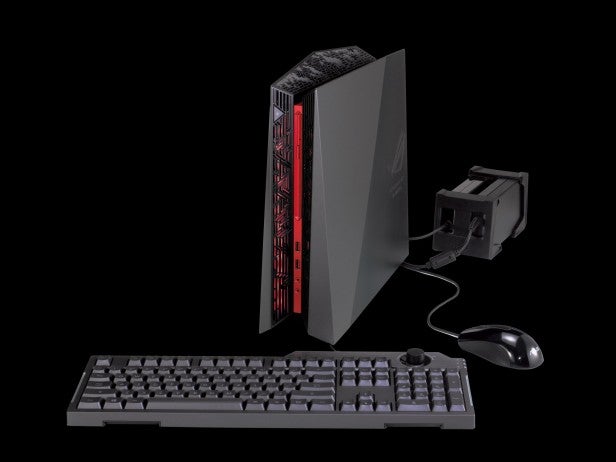 Asus includes several different apps to help manage the G20CB. Many tools are contained in the Aegis app, which acts as an overlay across the desktop. Clicking an option loads a widget: some monitor the CPU, GPU and memory, others display network traffic, and a world map with different timezones.

Elsewhere, the Aegis tool serves up a module for altering the case’s LEDs – any colour can be chosen, alongside pulsing patterns – and a tool called GameAlive that’s used for hotkeys and screenshots.

There’s a SoundBlaster app for audio management, and a Republic of Gamers GameFirst tool for managing network traffic.

The last app is designed to manage the mouse that Asus includes with this machine, but it wouldn’t even connect to my rodent – an apt metaphor for the peripherals boxed with the G20CB.

The mouse is a wireless device that looks like a gaming peripheral, but it’s basic – there’s a button on the top to alter the DPI between levels, but that’s it as far as extra features go. Its two main buttons are fine – fast and responsive – but they lack the firm action of proper gaming mice, and the buttons feel a little flimsier than on dedicated peripherals.

The keyboard is worse. It’s narrow and flimsy, with low-profile buttons that lack travel and have a soft, slightly sluggish action. The unit is adequate for typing, but this is a gaming PC – and gaming keyboards usually have taller keys, a faster typing action and a firmer, more distinct feel. The lack of height to the keys also makes it tricky to tell buttons apart during intense gameplay. 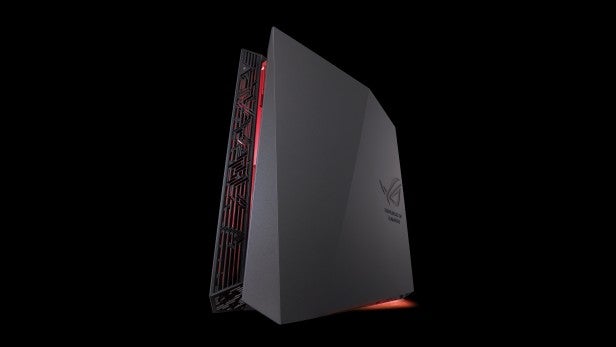 Should I Buy the Asus ROG G20CB?

The G20CB gets off to a reasonable start with its dramatic, illuminated enclosure, but it quickly goes downhill thanks to its poor versatility. More seriously, the G20CB can’t compete in benchmarks. Its processor is decent but slower than both competitors, and the GTX 970 GPU can’t match the AMD card inside the admittedly pricier Chillblast – and it’s unable to play games at 4K, which makes the GTX 960 found inside many different and cheaper Alienware x51 models look more tempting.

That’s not the end of this machine’s problems. Its SSD is underwhelming, the peripherals are poor, and the one-year warranty looks bad alongside Chillblast’s five-year deal.

If I were spending £1,400 on a gaming system, I’d save a little extra and step up to the Chillblast Fusion Fury Nano £1,500 or £1,655 models: both are far better. Alienware’s machine is fast enough for single-screen gaming and has better alternative options, all of which are cheaper than this.

The G20CB is an expensive system that falls behind rivals in every important area. If I was after a small gaming PC I’d look to any number of competitors before choosing this.

The Asus looks good, but its case isn’t practical – and that’s just the start of its issues. Its gaming performance can’t match some rivals, the processor lags behind the competition, and its SSD is sluggish. The warranty and peripherals disappoint, and the price is far too high. Look elsewhere for a small gaming PC.