The PG348Q laid out a solid set of benchmark results at factory settings. Its 285-nit brightness level is ample, and the black level of 0.27 is reasonable too. Those figures combine for a contrast ratio of 1,055:1 – another good result that ensures punchy colours at the top end of the scale and decent variation in darker areas.

The PG348Q’s average Delta E of 1.74 is below the crucial 2.0 barrier, where off-colours are barely noticeable, and the colour temperature of 6,366K is excellent – not far from the 6,500K ideal. The average gamma result of 2.06 is close enough to the 2.2 benchmark, too

It’s all good stuff, but the Samsung S34E790C performed better in most benchmarks. It was brighter out of the box, and its 320-nit backlight level was paired with a 0.15-nit black level – so its 2,133:1 contrast ratio was superior than the Asus. Its average Delta E of 1.65 was a tad better, and its 2.18 gamma was closer to the 2.2 benchmark. 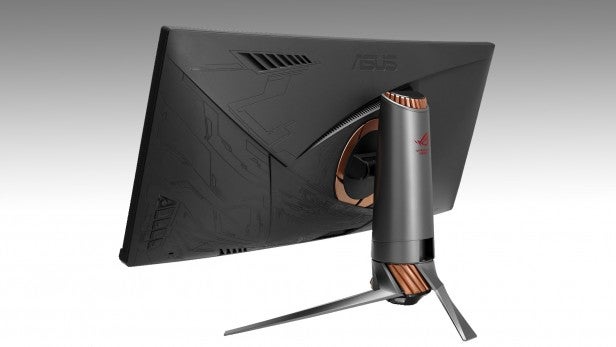 The two screens delivered similar sRGB coverage levels, with 98.6% from the Asus and 97.3% from the Samsung. The Asus only fought back in colour temperature – its score was closer to 6,500K than the 7,023K scored by the Samsung.

With the brightness reduced to 192 nits the screen’s average Delta E improved to an excellent 0.58, but the black level still sat at 0.18 nits – which meant the 1,066:1 contrast ratio still couldn’t match the Samsung.

The Asus is good in every department, but this expensive screen couldn’t compete with the Samsung when it comes to the quality of factory settings. This isn’t really a surprise, though – the Samsung is designed for work as well as play, so I’d expect nothing less than near-perfection in the colour department.

The PG348Q delivered a better set of results following calibration, which involved turning the green slider down by two notches and raising the brightness from its default of 80 to 85. With those changes made, the screen delivered a revised Delta E of 0.85; its other attributes remained the same.

That’s an improvement on the Samsung’s calibrated colour accuracy, which sat at 0.94, but it isn’t enough to help the PG348Q overhaul the Samsung in other tests. Once again, the Asus is good – certainly good enough for gaming – but not quite as competent as its main rival.

It’s no surprise that most of the PG348Q’s screen modes revolve around gaming. The screen’s default option is the Racing mode, which is designed to reduce input lag, and there’s an RTS/RPG mode that ramps up colour saturation and contrast.

An FPS option provides even higher contrast levels, and a Scenery option tweaks colour saturation for green and blue hues. There’s an sRGB option for viewing photos, and warm and cool colour options.

They’re big claims, but these modes proved underwhelming. The RTS/RPG mode made little difference, aside from dropping the Delta E to 2.64, and the FPS option had a poorer Delta E of 3.21. Scenery mode saw Delta E and colour temperature both decline. 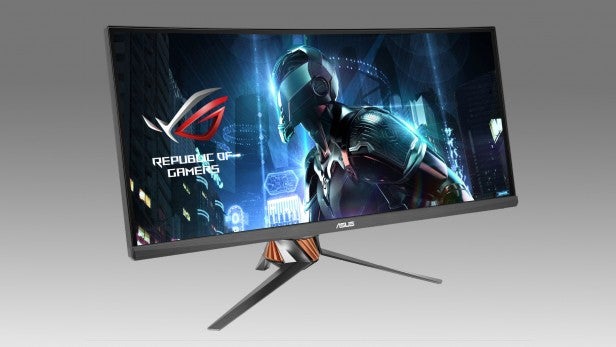 None of these modes really did much to improve the gaming experience, then, but the Samsung wasn’t exactly great in this regard either. I’d stick to more conventional settings on both panels.

I usually expect huge widescreen panels to perform poorly in uniformity tests, but the Asus exceeded my expectations – and it beat the Samsung.

The Asus lost 10% of its brightness in its top-left corner and 12% in the top-right segment – both figures are a little better than the Samsung screen. In the bottom two corners the Asus lost 7% and 8% of its backlight – with both of those results opening an even wider gap over the Samsung. The Asus improved towards the centre of the screen: in segments directly around the middle panel it never lost more than 8% brightness.

The PG348Q maintained decent colour temperature, too. Across most of its segments it gained between 1% and 4% when compared to my standard results – but that’s no bad thing, since it brings those segments a little closer to the 6,500K ideal measurement.

I spotted a little backlight bleed in the top-right and bottom-left corners, but those brighter spots were noticeable only on a dark, static screen; they won’t interfere with gaming and they won’t hamper an otherwise-impressive set of uniformity results.

The PG348Q is a proper gaming screen, so I expected an input lag below 20ms. The Asus delivered, with a result of 13.2ms. This is an excellent result that means only twitch-heavy competitive players will notice the difference. However, it’s one area where the Samsung was surprisingly a little better – it returned a score of 10.9ms in the same test. That’s a victory for the Samsung, but not one the average player will notice.

Should I Buy the Asus ROG Swift PG348Q?

I’ve rarely seen a gaming screen with as many features as the Asus PG348Q. The high resolution, huge diagonal and curved design mean that games are sharp and absorbing, with gameplay advantages over taller 4K screens. It offers hardware advantages, too, because less graphical grunt is required.

The PG348Q includes Nvidia G-Sync, speakers, numerous ports and plenty of versatility alongside some of the most outlandish monitor design I’ve ever seen. And, importantly, it offers decent quality: the Asus delivered excellent results in every benchmark, and its uniformity was surprisingly impressive.

That said, this screen isn’t without issues. It’s heavy and bulky, and awkward to set up. In addition, although image quality is good, it isn’t as good as the cheaper Samsung screen.

It all comes down to priorities, then. The Asus is an excellent, feature-packed monitor – so if you’re after a high-end panel with G-Sync then get saving. But if pure image quality is more important the Samsung is a better option.