What is the Asus ROG Swift PG348Q?

The latest screen from the Asus Republic of Gamers range is a monster. The PG348Q has a 34in diagonal and a 3,440 x 1,440 resolution, and the vast number of those pixels are stretched around a curved IPS panel. Nvidia G-Sync is present, too, alongside true 10-bit technology and flashing, customisable lights.

This monitor has every feature going, but for that you’ll have to pay a princely £1,000. That’s uncharted territory for a gaming screen – it’s usually only high-end professional panels whose prices hit four figures. Asus has plenty to prove here.

The 34in diagonal, 21:9 ultra-wide aspect ratio of the PG348Q will benefit most games. You get greater peripheral vision during racing games and twitchy first-person shooters, plus the extra screen real-estate means strategy games and MOBAs are more accommodating. In my opinion this is far more useful than buying a taller screen with a more conventional aspect ratio.

The curve helps, too. I’ve used huge 4K panels that have looked off-colour in the corners because those parts of the screen are just so far away. The PG348Q’s curve is less pronounced than other such screens; you’d need a circle with a radius of 380cm to match the curve of this screen, making it fairly subtle. Still, it’s enough to keep everything looking clear in the extreme corners. 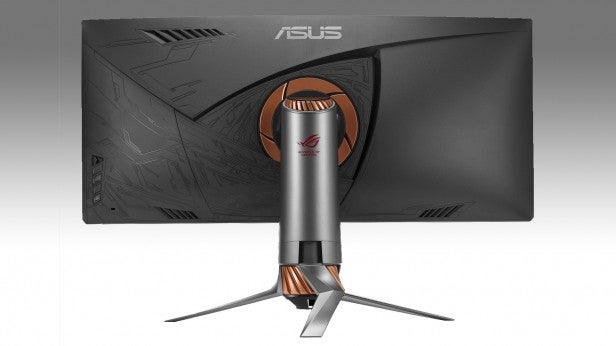 This is an excellent figure. It’s more dense than 1080p and 1440p panels, which means games are sharper and there’s greater room for work – but not so detailed that I needed to use the Windows 10 scaling options to make text and icons legible.

The 110ppi density isn’t quite as good as the majority of 4K panels, however. While this means that games won’t be quite as crisp, there are advantages. The 4.9 million pixels used in the Asus panel won’t be as demanding on GPUs as the 8.2 million rendered on 4K screens, so there will be less need for stratospheric graphics cards. With that said, if you’re buying a monitor this expensive, you probably have a fairly high-end PC gaming setup at home that’s well prepared for proper 4K gaming.

Although both the Asus and Samsung monitors are of the same size and resolution, the PG348Q is significantly pricier than the £700 Samsung screen. That’s because the Republic of Gamers panel is packed with a greater number of features.

For starters, there’s Nvidia G-Sync. This technology syncs the GPU’s frame rate with the refresh rate of the monitor to avoid stuttering and tearing, and it works flawlessly. The Asus can run at a maximum of 100Hz, which is ample; some screens offer 144Hz refresh rates, which will undoubtedly be smoother, but not by much.

In addition, the IPS panel is an impressive slab of technology. A true 10-bit screen, it is capable of rendering 1.07 billion colours. That’s a few more than the 16.7 million on offer from the Samsung’s 8-bit panel. Asus rates the screen as being able to display 100% of the sRGB colour gamut.

The PG348Q comes with a pair of 2W speakers – and they’re surprisingly good. They offer decent volume and punch,  and a reasonable mid-range with a satisfying amount of detail. The lowest and highest sounds struggle a little because of a narrow range, but the audio kit included here is usable if no alternatives are available.

The Asus is one of the most outlandlish monitors I’ve seen. Its three wide legs and the broad, circular stand are finished in gunmetal grey, with burnt orange accents throughout, and the rear of the panel is finished in a futuristic pattern.

That isn’t the only bit of ostentatious design. The base is covered in LEDs that project the Republic of Gamers logo downwards in a dramatic orange tone; it certainly stands out on a dark desk. Asus does include a button to alter the brightness of the light – and, thankfully, an option to turn it off. Expect to see quite a few of these over at /r/battlestations in the not-too-distant future.

The Asus design is in stark contrast to the Samsung, which is slim, finished in glossy plastic and brushed metal and comes with a smart, subtle stand.

The PG348Q looks good, but its extravagant design results in the Asus being one of the largest screens I’ve ever tested.

Its 11.1kg weight makes it more than a kilo heavier than the Samsung, and the PG348Q’s chunky legs mean it stretches 297mm front front to back – more than the 276mm of the Samsung. The Asus screen is wider and taller than its rival, too.

As a result, it wasn’t too easy to put this screen together. The legs fit to the stand via a couple of screws, but the positioning was a little awkward, after which plastic panels then had to be attached. The stand then had to be clamped into the rear of the screen, and a second plastic panel is then fitted to cover up the ports and connectors.

The on-screen display is decent, too, and is controlled by a joystick on the rear of the screen – the same method as the Samsung. The PG348Q’s menu is the fastest I’ve used, to the point of being a little too twitchy, at least at first. After a while, though, I was zipping around the menus with familiarity – helped, too, by their sensible layout.

Asus has loaded the PG348Q with DisplayPort 1.2 and HDMI 1.4 connections, plus four USB 3 ports, all of which are fine. Samsung’s screen only differs by including a second HDMI connection.

Accessing the PG348Q’s ports is a little tricky, however. They all face downwards, plus they’re hidden behind a removable plastic shroud. It won’t be a problem if hardware is plugged in and never removed, but it’s hardly conducive to quick switches.