You’d need a heart of stone to avoid being won over by the looks of the Asus Rampage II Gene. This X58 motherboard uses a MicroATX form factor and is packaged in a square box. Lift the lid and the Gene is displayed under a plastic clear cover with the manual, cables and other extras all tucked out of sight underneath. The initial impression is of a smaller, cuter version of the Rampage II Extreme.


As you can see from the photos the PCB is dark brown and the coolers are matt black with a red Republic of Gamers logo and the incredibly funky micro buttons that we first saw on Rampage II Extreme are also present.


Being a MicroATX board, it measures 244mm x 244mm which is 61mm shorter than a regular ATX motherboard at 305mm x 244mm. To put it another way the change in form factor has given Asus a 20 percent reduction in the surface area of the board so you might expect that the list of features has been cut to the bone. Not so. 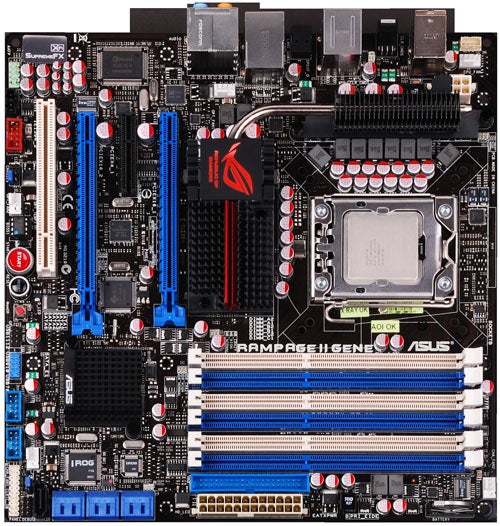 The Rampage II Extreme has triple graphics slots (16x8x8x) which are reduced to a pair of x16 slots on the Gene but you get full support for CrossFireX and SLI. The other change is a move from dual Gigabit LAN on the Extreme and a single Gigabit port on the Gene. In terms of ports and connectors the two models of Rampage II are very similar with six USB 2.0 ports and one Firewire ports. The Gene doesn’t include a bracket with extra ports whereas the Rampage II Extreme has two more USB and a second Firewire on a bracket.


Very few people have a need for three graphics cards and a second Gigabit LAN port is similarly unnecessary for most, so it is highly likely that the Gene offers a list of features that will be perfectly adequate for your new Core i7 PC despite the small size of the board. The question is why anyone would choose a MicroATX motherboard over a cheaper full size board. Well you might simply want to use a smaller PC case but all of the MicroATX cases we are aware of are designed for Media Centre duties with the possible exception of the Antec Solo Quiet Mini Tower.

We asked Asus about the thinking behind a MicroATX X58 motherboard and were told that mini towers are very popular among LAN party gamers in South East Asia. That may well be true but they seem to be completely unknown in the UK so the odds are that you will be installing the Gene in a regular tower case.


One obvious benefit of the smaller motherboard is the question of cost. The Gene is very reasonable compared to the Extreme as it is a full £100 cheaper however it is £50 more expensive than the MSI X58 Pro, and sits between the EVGA X58 SLI and Gigabyte GA-EX58-UD4P in terms of cost.

Despite its small size the Gene has to take on some full sized competition so let’s see if it is up to the task. The build quality of the Gene is superb and despite its tiny size we had no problem installing a chunky Noctua CPU cooler and a Radeon HD 4870 X2 graphics card. The memory slots are worth mentioning as they only use a retention clip on the end of the module at the top of the board. The other end – the one near the graphics card – has no clip yet there is a distinct sound as the memory snicks firmly into place. This means that you don’t need to remove the graphics card in order to release a module of memory, which is very considerate of the designer.


We had no need to use the external LCD Poster device as the Gene appeared to behave itself throughout testing but we did note some odd quirks that can probably be fixed with a BIOS update. Our initial runs with a Core 965 Extreme were done on Auto settings and all seemed well however the score in 3DMark Vantage was rather low. Boosting the CPU voltage to 1.4V fixed this mysterious problem. We had another issue with the Core i7 965 Extreme when we tried to use the Crazy Overclock profiles in the BIOS as they simply didn’t work. The two options for the 965 Extreme are 3.60G and 4.00G with the 3.60G simply raising the base clock from 24x133MHz to 24x150MHz. No matter what we did, though, the system wouldn’t take it. Manual overclocking up to 3.87GHz went as smooth as silk so the Gene can do the business, just not if you use the automated settings.

We appreciate that most home PC builders won’t be slipping an £840 965 Extreme into their new rig so we also tried a Core i7 920 and it behaved perfectly in the Gene. We could overclock with the Crazy Overclock 2.93G and 3.20G profiles and also manually took the speed all the way to 3.80GHz without any trouble.


No doubt Asus will sort out Core i7 965 Extreme overclocking with all due haste but there’s a glitch that seems to be inherent to the Gene. The passive coolers on the chipset look great but they are rather small and the Southbridge cooler isn’t even connected to the coolers on the Northbridge and the power regulation hardware. The result is that the temperature of the coolers hit a steady 60 degrees Celsius which is rather hotter than we like to see.


Our overall impressions of the Gene were very favourable and the loss of the third graphics slot is something we see as a complete irrelevance. Likewise we didn’t find the small form factor presented any problems but then, neither did it offer any obvious benefit.


The Rampage II Gene shares its DNA with the Rampage II Extreme, offering similar superb performance at a considerably lower price. Add in the potential to stuff all that power into an even smaller space than is usually possible and you have a motherboard we really rather like.