It’s been six months since I reviewed the Asus Maximus Formula Extreme. The Extreme was one of three related Asus X38 motherboards with the water cooled Extreme at the top of the tree, the Fusion block SE in the middle and the basic Maximus Formula at the bottom of the scale.


Today we’ve got an X48 chipped Rampage Formula to review and it’s the spitting image of the Maximus Formula. That makes sense as the difference between the X38 and X48 chipsets is non-existent apart from the addition of official support for a 1,600MHz front side bus and faster system memory. The surprise is that Asus still lists the X38 Maximus on its Republic Of Gamers website, as we fully expect the Maximus range to be phased out as the Rampage line supercedes it.


The Rampage Formula supports Intel’s Penryn processors with the full range of front side bus speeds and just like the Maximus Formula it uses DDR2 memory rather than Intel’s preferred DDR3. We understand there will be a Rampage Extreme model that uses DDR3, which is something that would have set the alarm bells ringing a couple of months ago as the DDR3 premium was enormous. At present 2GB of DDR3 costs just over £100 compared to £50 for 2GB of fast DDR2 so the gap is closing, and fast. 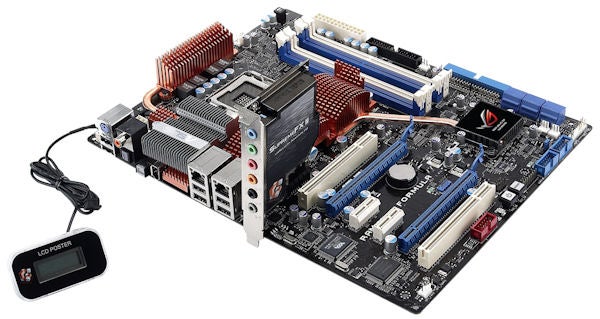 The passive cooling system on the chipset and power hardware is extensive and has been carried over wholesale from the Maximus. While it looks as though the cooling system may intrude on the CPU cooler or your graphics cards, appearances are deceptive. Asus has kept the series of coolers and heatpipes low in profile and that combines with the laid down SATA and IDE connections to make this one of the easiest motherboards to install and tinker with.


Asus supplies an audio riser card that sits above the top-most PCI slot and even if you pack in a pair of double slot graphics cards in CrossFire you’ll find that you have at least one PCI slot and one PCI Express x1 slot available for adding in additional expansion cards, like RAID controllers, or Wi-Fi adapters. Also, both of the graphics slots have 16 lanes of PCI Express 2.0 so you won’t have any bandwidth problems even when running two top-end graphics cards like the 3870 X2, in Crossfire.


The I/O panel carries a modest array of ports and connectors as it is largely taken up by a chunk of the chipset cooling system. There’s a single PS/2 connection for your keyboard, six USB ports arranged in three pairs, one Firewire, optical and coaxial outputs for the audio, dual Gigabit LAN and a button to clear the BIOS settings. There is a risk that you might press the CMOS button in error so the switch can be enabled and disabled with a flick switch that is next to the Southbridge. The sensible approach is to enable the button when you are overclocking your system then once you have it stable you can disable the button to avoid problems. If you need more ports there’s a bracket in the box with two more USB and a second Firewire.

The Rampage seemed to be familiar to us from our Maximus review so we dived into the testing with stacks of optimism but that rapidly faded. The first question mark was raised as we had been sent BIOS 0207 by Asus however the board had BIOS 0219 installed. There was no way we were going to install an earlier BIOS as that’s a step backwards in anyone’s book. As the X48 is all about the latest processors and bus speeds the first processor up for testing was a Core 2 Extreme QX9650 on a 1,333MHz front side bus. The Bios burst into life but Windows refused to load. Switching to a 1,600MHz QX9770 got everything going successfully. Once we had 64-bit Windows Vista installed we were able to investigate the mysterious ways of Penryn and why the heck we couldn’t get the QX9650 to run on default settings.


It seems that the answer lies in the depths of the voltage settings which is a bit awkward because Asus offers you a total of seven settings to play with. The first step is to use the hardware monitor in the BIOS to work out what settings are running by default and use that as a starting point.


You can crank up the CPU PLL, North Bridge, DRAM, FSB Termination, South Bridge and SB 1.5V Voltages without too much trouble provided you use the system of colours in the BIOS to avoid trouble. Green is safe, yellow is pushing your luck and red is decidedly risky. The odd one out in the settings was the CPU Voltage as our Penryns were very fussy about the amount of power they wanted. 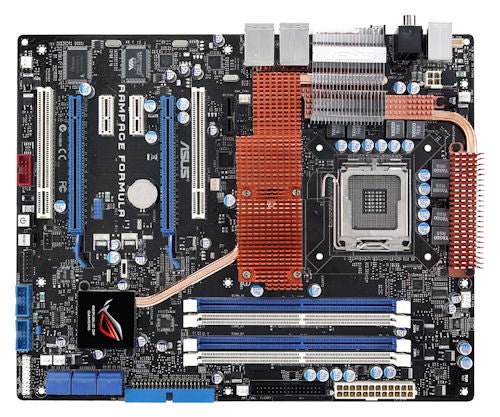 In the past we have been able to run our QX9650 on a variety of motherboards including a Gigabyte X48-DQ6 on Auto settings or with extra voltage for overclocking. On the Rampage we had to manually set the voltages to get the system running and were then able to raise the core voltage to 1.40V for overclocking.


The QX9770 was easier to get running as the Auto BIOS settings worked perfectly but when it came to overclocking the QX9770 didn’t want anything more than 1.24V core voltage. That’s the standard voltage applied through a manual setting and when we raised the voltage the processor refused to overclock.


Also, it was also clear that Rampage is overvolting the memory by about 0.1V more than the setting chosen, which is a bit naughty. Our conclusion is that the BIOS is a work in progress that is nearly – but not quite – finished.


Although it took a fair amount of work to get our QX9650 and QX9770 systems running satisfactorily, once we got there the results were very impressive. The systems were powerful, cool, quiet and stable but it’s hard to give a big thumbs up when you can’t boot in to Windows on Auto settings.


The Rampage Formula takes over from Maximus with all the bells and whistles we’ve come to expect from Asus’ top-end boards. However the move from Intel’s X38 to its X48 chipset doesn’t make a huge difference to real world performance and it is clear the BIOS still needs some work before it even has some basic functionality. We’d recommend you wait a few weeks and keep an eye on the BIOS updates before you plump for this one.