The reasons they’re popular are two fold. Not only do manufacturers favour them because they allow more efficient fabrication and thus a greater volume to be produced, but consumers also like them because they offer a larger active screen area – great for aiding productivity, and for viewing widescreen movies and playing games.


It therefore comes as no surprise that many companies are jumping on the widescreen bandwagon, including Asus, more commonly known for its motherboards and graphics cards. Here we have the £310 19in Asus PW191 and first impressions are mixed. 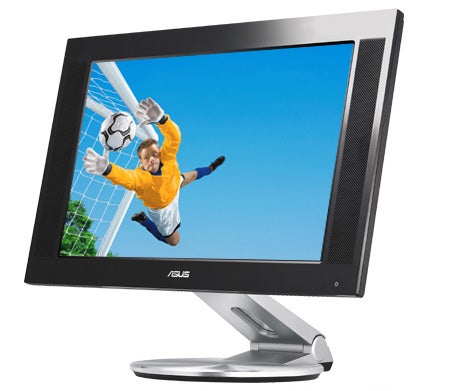 I took it out of the box, set it up, and then sat staring at it. Do I like the design? Obviously a question of personal preference. Personally, I’m not that keen. You can argue that the machined aluminium alloy base, the black chassis, and the glossy bezel give the PW191 a more unique look in an LCD world dogged by drab aesthetics, but to me it looks as if they’ve tried too hard. That said, a couple of my friends popped over and were suitably impressed. Just goes to show that one man’s mongrel is another man’s model.


For me though, and despite the fact that it houses the speakers, the bezel is just too wide and has the affect of making the picture feel smaller. The bezel’s glossy black finish also has the annoying knack of attracting fingerprints and reflections, but in my opinion the overall appearance is one that is straight out of the 80’s. Think of it as Bang and Olufsen, but not quite.


Ok, I’ve been focusing on its looks, which for some might not be as important as features and functionality. In those terms, the PW191 is more or less up there with the competition – apart from a couple of aspects that I’ll come to in a minute. First, the excellent stand. The circular base is weighty and solid, offers ample stability to the whole unit, and can be swivelled through 120 degrees. The double-hinged stand also allows the PW191 to be tilted 5 degrees forward and 20 degrees back as well as raised and lowered through approximately 13cm. And, if you enjoy writing and editing long documents the 90 degree pivot mechanism (along with that widescreen format) really comes in handy if you want to work on and view a whole sheet of A4 at a comfortable font size and at 100% zoom. A word of warning though. If you’ve threaded the cables through the aperture in the neck of the stand, make sure they feed through freely with plenty of slack before pivoting the display. Otherwise you risk wrenching the cables from their ports. 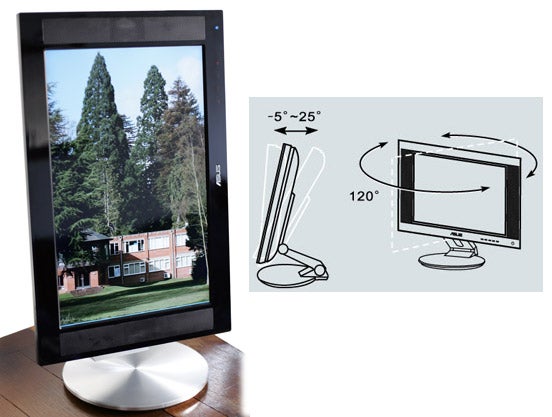 As for connectivity, the PW191 is equipped with both a D-SUB and DVI-D port together with a line-in jack to feed the display’s unsurprisingly tinny and mediocre 2W stereo speakers. A headphone jack is also situated next to the line-in, but one mounted in a more accessible position would have been preferable. The other gripe is the external power brick. It’s a personal thing, but I like my work area clear of clutter, so this addition on top (or below) my desk is an unfortunate feature. All the ports are hidden behind a small removable cover and unlike some manufacturers, Asus is to be congratulated for supplying all the necessary cabling.

With a high degree of adjustability, and a reasonable feature-set what were those two aspects I referred to earlier? Well it’s all to do with the panel itself. First, it’s a glossy one, which Asus refers to as the “Color Shine glare-type” panel. I love that name as it makes no attempt to disguise the affect of this type of LCD optical filter. Colours are made to “shine” through – not necessarily accurately – but it definitely enriches the colours. And while most manufacturers try to emphasise the anti-glare properties of their LCDs, Asus says it’s a “glare-type” panel – and believe me, in all but the darkest of rooms the PW191 is a reflection-phile. Still, it all comes down to how you use your monitor. This shiny optical filter does give the PW191 a certain CRT/TV-type look and gamers/movie watchers tend to like the enhanced vibrancy. However, image editing professionals tend to despise the reflections.


The other aspect is all to do with resolution. Natively, the PW191 has a resolution of 1,440 x 900 pixels. Now if you’re looking to upgrade, most of us want more desktop real estate in which to work in. However, this resolution doesn’t do it for me unless you really want widescreen and don’t mind a restricted vertical working space.


With only 900 pixels in the vertical plane (assuming you’re working in a landscape orientation), I find the PW191 quite simply too narrow and in fact a downgrade from a 17in or 19in LCD with 1,024 vertical pixels. Most of us work in an up/down fashion and in my opinion the less vertical scrolling I do the better. As such the PW191 is a victim of its own resolution, but its saving grace is its pivot function.

With that rant out the way, let’s take a look at the PW191’s controls. The buttons or lack thereof is explained by a set of five backlit, touch-sensitive switches. These glow with a bright orange in use and cunningly dim down afterwards. Getting them to work, however, is another matter. The ones on this unit were so temperamental that I lost patience trying to invoke any changes. The on/off button is also situated perfectly for accidental operation when adjusting the tilt and height or when pivoting the PW191.

Touching “menu” enters the OSD and the submenus, and the middle two switches are for adjustment and scrolling while also doubling up as shortcuts to the volume and brightness. The “S” button is for exiting menus as well as selecting from five modes that make use of the panel’s so-called SPLENDID Video Enhancement Technology. These include Standard mode, Scenery mode (boost in contrast and brightness), Game mode (saturation boost), Night View mode (enhancing detail in dark scenes) and Theater mode (sharpness, contrast and colour optimisation during playback).


In all honesty these are a bit of a gimmick, and only have a subtle affect. I prefer to use the user controls to tweak the picture and Asus has ensured that all the typical settings (brightness, contrast, source selection, etc) are available. You can also choose from colour temperatures sRGB, warm, cool and normal, adjust the RGB levels independently, tweak the sharpness and the saturation, and even select from three skin tones settings (reddish, yellowish, and natural). One option that is missing is the ability to rotate the OSD when you’ve pivoted the display. Making adjustments in an up-ended OSD always feels a little awkward. 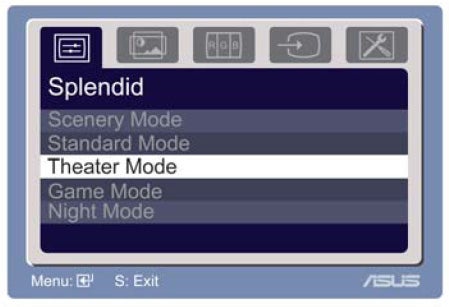 Whether or not you’ll use any of these modes is debatable, but I have to say the PW191’s picture looks best when the all the Standard/Normal options are selected. Surprisingly, the sRGB mode looked rather inaccurate.


In tests, the PW191 was an average performer. Don’t be fooled by the glossy optical filter and the way it makes colour look punchy. The colours in my sample movie clips actually looked very unnatural. Blotchy patches of red and green can be seen dancing around the faces of actors and actresses and the overall look was marred by a pinkish tinge. Playback was also noisy. I even compared the PW191 to another monitor (the NEC MultiSync 20WGX2) and was surprised at how much better the movies looked. I recommend watching movies or playing games in a darkened room – the reflections are just too noticeable otherwise. Furthermore, in the standard landscape orientation, viewing angles were relatively narrow and a clear colour shift from green to pink can be seen when raising and lowering your eye-level through about 20cm. As for the Displaymate results, these were so so. Lowlight and highlight compression was evident in both the colour scales and greyscales tests, but mid-range greys were smoothly ramped with little sign of any banding.


With all aspects considered the PW191 is a reasonable attempt by Asus to break into the widescreen LCD market. I do like the design and functionality of the stand and some I know will love the glossy black bezel. There’s been no skimping on the inputs and there’s a good selection of adjustments. Asus also states a one year “Zero Bright Dot” warranty. However, picture quality is not quite up there with the best and Asus needs to address the problem with the touch-sensitive controls.


A functional stand and an interesting design do not make up for mediocre picture quality. At £310 there’s a strong argument for purchasing a 20in 1,680 x 1,050 widescreen LCD instead.