What is the Asus Prime Z270M-Plus

My pick of the Intel-based micro-ATX motherboards come from Asus. The Prime Z270M-Plus costs a mid-range £119, and it packs a solid set of features onto its smaller PCB.

The Prime’s core specification means this motherboard can support a high-end rig even with its reduced form factor.

The CPU socket, of course, supports the latest Kaby Lake chips, and it’s bolstered by the Z270 chipset – Intel’s current best consumer spec. The four memory slots handle DDR4 at speeds of up to 3866MHz, and the top PCI-Express x16 slot has maximum bandwidth for the fastest GPUs.

Related: Everything you need to know about Kaby lake 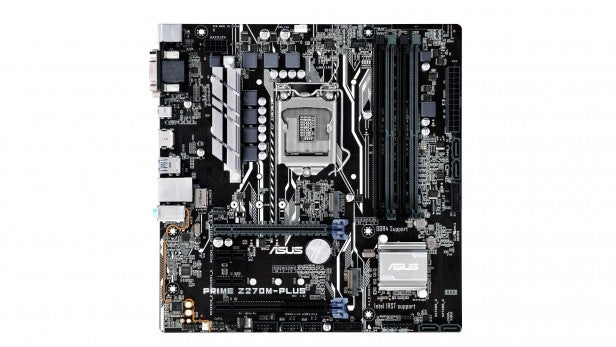 Impressively, Asus has also crammed two M.2 connectors onto this board, although it’s a little cramped: one sits close enough to the CPU socket to potentially interfere with some CPU coolers, while the second is right up against one of the PCI-Express x1 slots.

The layout is mixed elsewhere. The tiny heatsinks help make it easy to manoeuvre, and the three fan headers are positioned well – but the headers at the bottom of the board are extremely close to the second PCI-Express x16 slot, and none of the four SATA connectors are perpendicular to the board itself.

The audio circuits are shielded, but the underlying hardware is only a basic Realtek chip, and there’s nothing special about the Intel Ethernet. There’s no Wi-Fi despite this being a smaller board, and its mainstream branding means there are only modest LEDs around the PCI slots and audio gear, rather than the RGB illumination you’ll find all over gaming boards.

The backplate is basic, too. I’m pleased by its USB 3 and USB 3.1 Type-C ports, but it only has three audio jacks – and, oddly, it has two PS/2 connectors. That’s fine for legacy peripherals, but it’s less important than ever in the modern world. 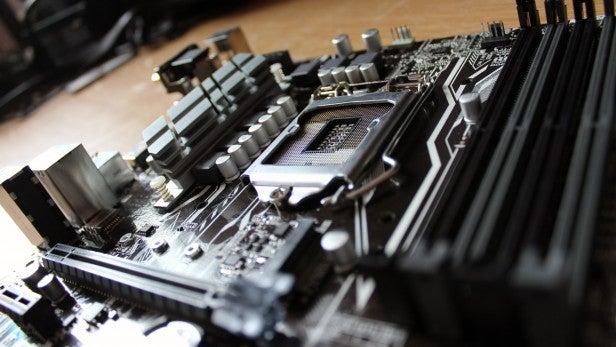 Instead, Asus goes big on this board’s reliability. The firm claims that 8,000 hours have been dedicated to validating the Z270M’s ability to work in all sorts of conditions, from extreme hot and cold temperatures to rust resistance. It’s also been built to withstand jolts and shocks, and a 48-hour stress test is run on every product.

Related: The Best CPUs for Gaming

The Prime’s smaller form factor and lack of real high-end features follow through to its benchmark results. Its Geekbench 4 scores of 5596 and 18,074 are mediocre, with the latter result a fair chunk slower than most other Z270 boards. It’s enough to handle the sort of tasks given to mid-range, micro-ATX machines, but it’s hardly going to set the world alight. 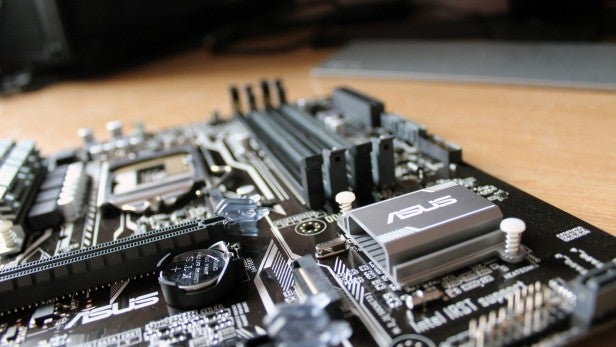 The same is true of other results. Its Fire Strike score of 6817 falls right in the middle of the pack when it comes to current-generation Intel boards, and its CrystalDiskMark results of 475MB/s and 459MB/s are underwhelming – they certainly won’t help any SSD run at its top speeds.

The only benchmark where this board really excelled was power consumption. Its idle draw of 51W is the best I’ve seen, and its peak figure of 96W is only one Watt more than the most efficient board during a stress-test.

Should I Buy the Asus Prime Z270M-Plus?

The Z270M doesn’t perform too well in benchmarks, but that’s not where this board is designed to excel. It handles the basics well, and Asus’ extra reliability testing should ensure that it stays the distance, too – important when you could be building a cramped, small-form-factor rig that might be tricky to access for repairs or replacements.

It’s got the full might of Intel’s Z270 chipset on show, which is another added bonus. It’s a little pricier than comparable ATX boards, but I reckon the price of miniaturisation is worth paying for this competent, smaller offering.

This Asus board doesn’t produce stunning benchmark results, but it does offer a solid set of core features for a keen price – and at a smaller form factor. It’s a good option for building a well-specified small rig, especially if performance isn’t a crucial consideration.