This modest motherboard is one of the cheapest you can get for AMD’s new Ryzen processors thanks to its price of £91/$117 – but that does mean a lesser chipset and a smaller roster of features.

This board’s lower price means it has one of AMD’s more affordable chipsets. Don’t think that Asus has used the cheapest bit of silicon it can find, though – the B350 sits in the middle of the range, below the X370 but above products that are designed for budget boards and small-form-factor slates. 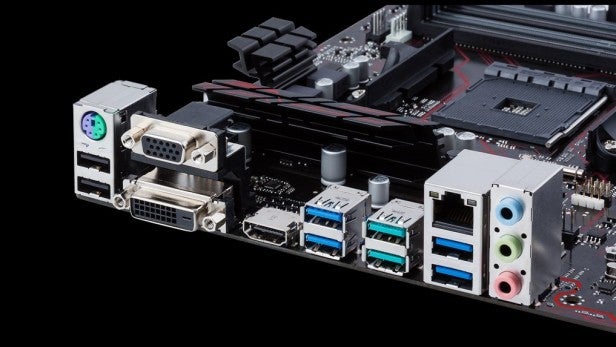 The means the B350 chipset still has solid features. It supports dual-graphics, albeit only for AMD Radeon hardware, and it caters for all of the usual RAID levels and CPU overclocking.

In other areas, though, it’s a little cut down. It supports four native SATA ports rather than six, and two USB 3.1 ports – three times fewer than in the range-topping X370 chipset.

Many Intel boards will have more connectivity, too. Even mid-range boards tend to have six SATA ports and four USB 3 connectors, and this board has one M.2 port – while many Intel offerings include two. 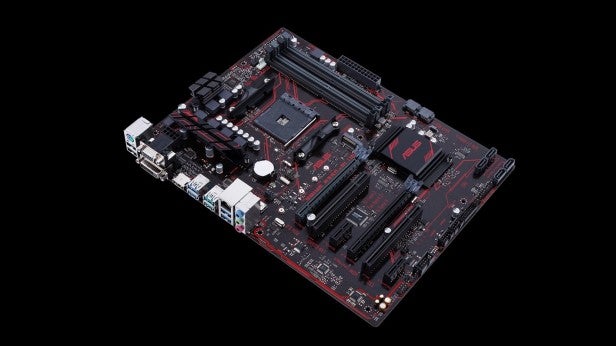 If you do opt for this board, make sure you use a Ryzen processor, as the extra power and PCI lanes delivered by the fresh silicon means you can use faster M.2 SSDs and DDR4 memory when compared to older A-series APUs.

This affordable AMD board is fine elsewhere, although it rarely pushes the envelope. The peak memory speed of 3200MHz with Ryzen chips is fine, but other AMD processors and APUs see that figure decline to 2400MHz. It doesn’t have USB 3.1 type-C on its backplate, and there are only three audio output jacks.

It has one full-speed PCI-Express x16 slot and one slower, so dual graphics are out – but, unusually, it has two standard PCI sockets alongside its two PCI-Express x1 ports. That’s rare these days, and it’s great for older expansion cards.

There are no on-board buttons or displays, and the rest of the board hardly catches the eye. I like its black PCB, and it’s covered with red lines and accents, but its heatsinks are tiny and there aren’t any RGB LEDs – only crimsons lights. The board only has three fan headers, which is fine for a basic rig but not ideal if you need more cooling . 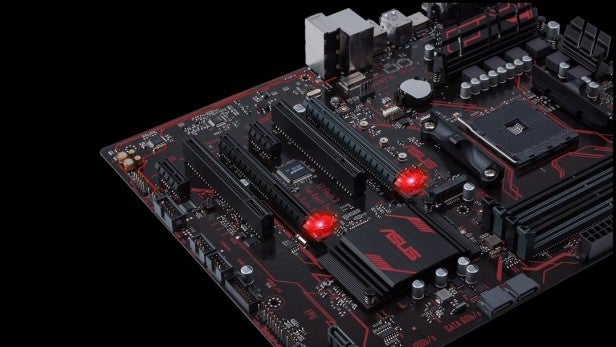 It’s only got basic audio and networking, too, and no Wi-Fi.

There aren’t any extras on this board, but that’s less important – and less damning – on such an affordable slab of PCB.

It’s no shock that this affordable board and its mid-range specification returned a middling set of benchmark results.

Its single- and multi-core application scores of 4502 and 23,419 are among the poorest I’ve seen from a Ryzen motherboard, and its CrystalDiskMark speeds are similarly underwhelming.

That doesn’t bode well for top-tier performance, but remember that we’re talking fine margins that won’t make a huge amount of difference to most applications in the real world.

It’s a similar story in gaming benchmarks, where the Asus’ 3D Mark score of 6907 is a little way behind the best gaming motherboards.

The Asus clawed some ground back in power tests. Its peak power draw of 120W is middling, but it achieved a table-topping idle draw of 56W. That’s important, because this board will likely spend more time at that end of the scale than near to its peak performance levels.

Should I Buy the Asus Prime B350-PLUS?

The Asus doesn’t go beyond the basics in many departments, but that’ll be enough for most people – the B350-PLUS can be used to put together a very capable machine for a modest price.

Its benchmark performance isn’t anything to write home about, but the fine margins of motherboard testing soften the blow – and it’s not like I was expecting record-breaking speed anyway. If you want a reliable and well-balanced board on a budget, this is a fine choice.

The Asus board doesn’t have high-end features and it’s not the quickest performer, but it has enough to prove suitable for mid-range rigs and it comes with a keen price – so that’s enough to earn a recommendation from us as my favourite AMD budget board.