This week saw the launch of Intel’s brand new Core i7 800 and Core i5 700 (Lynnfield) CPUs along with the P55 motherboard chip that will be supporting them. In a nutshell, the platform as a whole looks very impressive with it offering great performance, low power usage, and reasonable pricing. Today, then, we’re going to start our analysis of just which one of the new motherboards you should go for and we’re kicking off with the Asus P7P55D Deluxe.


Back in July Ed gave a first look to the Asus P7P55D EVO, and was suitable impressed so we had high hopes for this board, it being the Deluxe version and all. 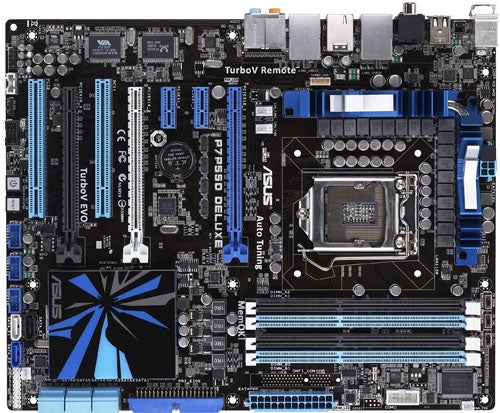 Overall, the Deluxe is quite similar to the regular P7P55D EVO but one change lies at the foot of the board where the SATA connections have been reorganised. This has created slightly more space around the P55 chipset and has allowed Asus to employ a large low profile aluminium heatsink. The heatsink is covered in turn by a plastic plate that carries an Asus logo that is illuminated by blue LEDs. Thankfully you can disable the LEDs in the BIOS and we did so, rapidly, although this had a strange consequence. It seems that the LEDs are configured to be on by default. When you turn your PC on the LEDs also come on then after POST they go off, provided you have disabled the setting in the BIOS, but oddly when you turn off your PC the LEDs will briefly flash into life again.


Another change in the layout of the Deluxe lies up by the CPU socket where the power regulation hardware has been upgraded from the 12+2 set-up on the basic model that we previewed and has become 16+3 on the Deluxe. Asus has used tiny chokes and capacitors and has managed to fit the hardware in very neatly without any need to locate components on the back of the board.

As Ed mentioned the P55 chipset is a single chip rather than the old Northbridge/Southbridge combo so the layout of the P7P55D has the capacity to be neater than you would find on a Core 2 or Core i7 900 (X58) motherboard. X58 motherboards also tend to look cluttered due to their triple channel memory controller – as opposed to the dual channel controller employed on P55 boards.


Despite having these inherent advantages we have to say that Asus has done a superb job with the styling of the P7P55D in particular – there are neat touches everywhere you look. The passive coolers on the power regulation hardware are extremely funky and gain a touch of class as they are secured by screws rather than those dreadful plastic pop pins. We’re also big fans of the single sided RAM retention mechanism, called QDIMM in Asus’ bumph. Down at the foot of the board the Power and Reset micro buttons nestle next to three USB headers and a Firewire header. There are eight USB ports and a Firewire port on the I/O panel as well as a bracket that carries two USB ports and an eSATA port.

Asus has gone to town with the SATA storage with six SATA II ports on the P55 chipset, which supports Intel RAID, two more SATA on a JMicron JMB322 controller and another SATA port on the JMicron JMB363 that also controls the ATA133 connector. The 10-channel audio is supplied by a VIA VT2020 chip and there is dual Gigabit LAN. All in all it’s an impressive feature set that’s been implemented almost perfectly all that remains now is to see how performance holds up.


We tested the P7P55D Deluxe with a Core i7 870 processor, which is the fastest CPU of this new batch. The Core i7 870 has a nominal clock speed of 2.93GHz (22x133MHz) but thanks to the enhanced Turbo Boost that is part of Lynnfield all four cores can increase in speed to 3.20Ghz when the system is under load. If your software is only stressing two of the cores in the Core i7 870, Turbo Boost will increase the speed even further to 3.46GHz and in the event that you only have one core working it will be automatically clocked to 3.60GHz.


That set the bar quite high for our overclocking efforts and we felt glum that our review sample of the P7P55D hadn’t come with the external TurboC Remote gizmo that you can see in the photos. We were going to have to do this job the hard way and we eyed the three illuminated flick switches at the top of the Deluxe with trepidation. Each switch unlocks extra voltage settings in the BIOS for, respectively, the CPU, chipset and RAM. 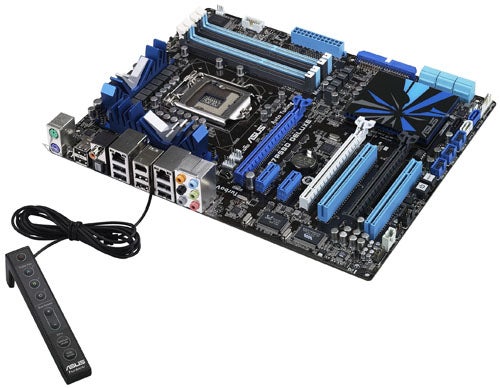 We started cautiously and raised the CPU and IMC voltages by 0.2V. IMC is the chipset voltage and takes over from the QPI setting on LGA1366 Core i7 systems. We had two choices with the CPU voltage in the BIOS and went for a fixed voltage so that we could be sure that the voltage was doing what we expected. The alternative is to use an offset value where the voltage varies dynamically, just like usual, however the upper value can be increased or decreased by the amount that you select in the BIOS.


Our initial efforts at overclocking were quite disappointing and we couldn’t get the speed much beyond 3.7GHz which sounds fast but Turbo Boost will manage a good chunk of that speed increase on its own. Asus assured us that a 4GHz clock speed should be easy to achieve so we got busy with increased voltage however we got the distinct impression that extra power was making matters worse so we returned the IMC setting to Auto and tried the Offset option for the CPU voltage and the system responded admirably. We found it was completely stable at 22x180MHz=3.96GHz and no doubt if we had faffed around with an extra MHz or two on the base clock speed we would have got to 4GHz. The rest of the motherboard is a triumph and we were hugely impressed.


It isn’t cheap but the Asus P7P55D Deluxe is a perfect match for the new Intel Lynnfield processors and we just hope the competition can match this superb motherboard.