Having looked at quite a few mid-range micro-ATX AMD solutions recently, including the excellent Gigabyte MA785GMT-UD2H and more recent Asus M4A75TD-M EVO, we figured it was time to check out a small Intel board for those who don’t need (or can’t afford) the hardcore features of the ROG Maximus III Gene. The Asus P7H55D-M EVO is an ideal candidate for a small and quiet PC, as it sports Intel’s new H55 chipset that supports the company’s new CPUs with integrated graphics. Don’t let that fool you into thinking it’s too low-end though, as this board not only offers a few overclocking features but even supports USB 3.0. 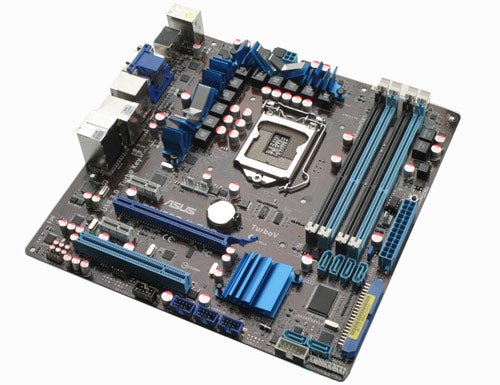 First off let’s go over the basics. This board fits socket LGA 1156 processors including pin-compatible Core i7, Core i5, Core i3 and new Pentium CPUs. Keep in mind that if you want one of the high-end Bloomfield Core i7s with triple channel memory support you’ll still need to opt for an X58 board like the EVGA E760 X58 SLI Classified or upcoming Asus Rampage III Gene.


Meanwhile the P7H55D-M EVO’s integrated graphics outputs will only work with the newer dual-core Core i3 or Core i5 600-series Clarkdale processors (i.e. not with the quad-core Lynnfield Core i5 750), as the actual graphics chip is embedded in these ‘low-end’ CPUs and not the board itself. It’s all very confusing and poorly differentiated on Intel’s part, but having a read through our Intel Core i5 661 review should help to clarify things. 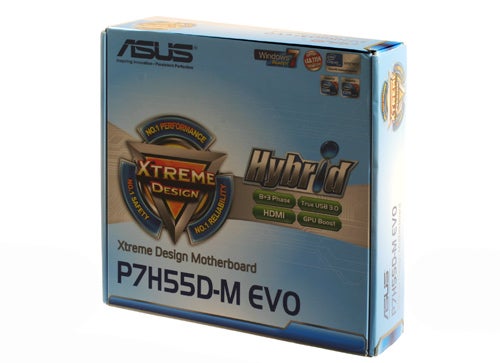 Asus includes a very sparse bundle with this board; just the bare minimum of a driver CD, two black SATA cables (one angled, one straight), black EIDE cables, the I/O plate and pin header extenders are provided. The latter addition does make plugging in all those fiddly case cables so much easier, and is something we wish all motherboard makers would include as standard (though to be fair a few do).


Visually, the P7H55D-M EVO is dressed in the signature combination of grey and blues on a black-and-brown PCB that we’ve come to know and love from Asus’ midrange. Overall we’d say the MSI P55-GD65 still wins out in the looks department, but the P7H55D-M EVO is definitely an attractive board, especially with its distinctive metal VRM cooling blocks around the CPU. Despite their height there should be plenty of clearance for almost any type of cooler.

Layout isn’t quite as clean as we’re used to from Asus – for one thing, due to the extra I/O video ports it’s a tad more cramped than on P55-based boards – but everything is still very accessible. Thankfully there are no relics such as a floppy drive connectors taking up valuable space either. The only nod to older components is the eight-pin ATX power socket which will take the plugs of older power supplies and has a plastic placeholder covering four holes if you’re using a newer PSU.


Next to the CPU socket are two four-pin CPU and case fan headers, with a third three-pin header beside the memory slots. The memory slots sport an innovative feature unique to Asus boards called Q-DIMM, where they only have a lock-clasp on one side making inserting or removing modules easier than ever. The P7H55D-M EVO supports DDR3 memory speeds of up to 2133MHz overclocked, and comes with yet another unique feature in its memOK! button. This will automatically tune any memory for optimum compatibility with the board and has its own small LED to notify you if incompatibilities or errors are found. 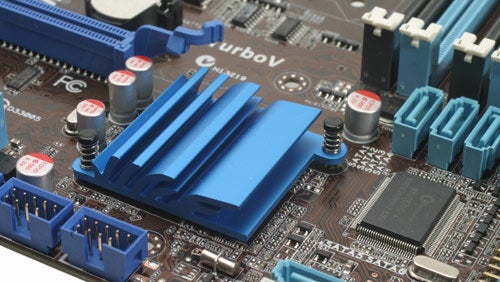 Below the memory slots are six upward-facing SATA ports separated out to ensure that your graphics card won’t obscure any of them. There are no extra controllers to provide Drive Xpert or SATA 6GB/s compatibility, though after examining these features in the Sabertooth 55i TUF and P7P55D-E Premium motherboards respectively, we’re happy to report that’s no great loss. There’s also an angled EIDE port though this is becoming increasingly redundant.


Three USB 2.0 headers and a FireWire header can be found along the motherboard’s bottom edge, though no expansion brackets are provided. Getting onto card slots, the P7H55D-M EVO offers two PCIe x1 slots to either side of the PCe x16 slot, though one of these will be obscured with a double-width graphics card installed. A single PCI slot is provided for those with older cards.


Of course, as there’s only a single x16 slot you can’t install a second graphics card in SLI or CrossFire, but if you are into high-end setups, why consider a H55-based board with integrated graphics in the first place? Also, we prefer this handicap by a large margin to many socket LGA 1156 boards that pretend to offer multi-card support, but in reality only have a second full length slot running at x4 (which is unusable for anything approaching high-end graphics).

Finally getting to the rear I/O we have a generous selection due to the video outputs Intel’s H55 chipset provides, which include VGA, DVI and HDMI. Dedicated audio is catered for by six analogue jacks and a digital optical output, each of which can give you up to 8 channels of surround sound (for 7.1 speakers), while Gigabit Ethernet is a given for networking. Four USB 2.0 ports are joined by a single FireWire connector, eSATA port and of two USB 3.0 ports in their signature blue livery, courtesy of an NEC D720200 controller.


USB 3.0 is an undoubted highlight of the board and makes a lot of sense on a model loosely aimed at a home theatre setup, as it allows super-fast access to external storage for quickly transferring large files such as DVD-rips. Of course that storage will need to be compatible with the new standard, so you’ll want something like the Buffalo DriveStation HD-HXU3.

While the P7H55D-M EVO lacks high-end overclocking hardware features like physical power, reset, clear-CMOS, voltage or turbo buttons found on its more expensive cousins, it does still have a few enthusiast features.


Perhaps the cleverest of these is Turbo Key, which rather than having a physical button on the board turns your PC’s power button into a… well, turbo button, giving you an instant processor overclock. GPU Boost is largely redundant though, as while the H55’s integrated Intel GMA graphics are perfectly adequate for everyday tasks and video, not even a 100 per cent overclock would make it a competent gaming card.


As ever, Asus’ BIOS is crammed with options but generally features a fairly intuitive layout – though we still don’t see why O.C. Profiles are hidden under Tools rather than Ai Tweaker. Together with the eight different fully customisable profiles, Ai Tweaker gives you great control over overclocking, whether manual or automatic. 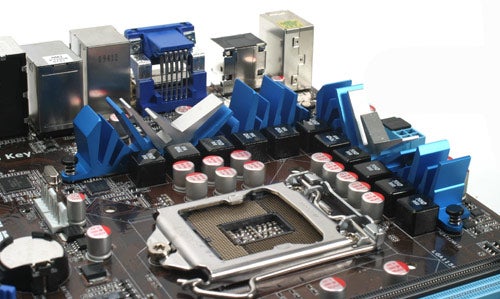 Old familiars TurboV and Fan Xpert are also on hand. The former lets you dynamically overclock the PC from Windows or switch between several calibrated profiles, while the latter will assess the performance of whatever fan you’re configuring to see how well it performs and assign fan-speed levels to it accordingly, again with varying profiles. Last but not least among software features is Asus’ ExpressGate ‘instant-on’ OS, though it needs to be installed on your system rather than being included on flash memory like with higher-end boards.


Having covered the hardware and software basics, it’s time to see how this motherboard performs at overclocking. To be honest it didn’t do as well as we had hoped. Unlike the other most recent Asus motherboard we looked at, the stonking ROG Maximus III Gene, the P7H55D-M EVO wasn’t limited by our testing-cooler in overclocking. In fact it nearly failed to break the 4GHz barrier, with even a few MHz above that on our Intel Core i5 750 (which runs at 3.2GHz stock) crashing the entire system within seconds of running anything intensive. This certainly wasn’t due to CPU temperature, which hovered around 70 degrees. 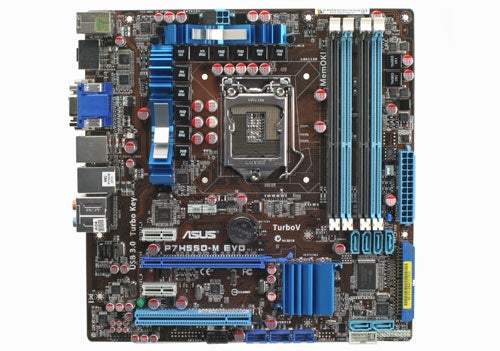 So what are we left with? A good-looking mainstream board with all the features you’d really need including USB 3.0, but suffering from slightly under-par overclocking performance, for around £100. If you’re not planning anything too extreme, it’s certainly a worthy contender. However, there’s no lack of competition, with the likes of Gigabyte’s Micro-ATX GA-H55M-USB3 offering a similar feature set (with the addition of a DisplayPort video output and AutoGreen energy saving using Bluetooth) for only £90. Our advice would be to wait (if you can) for more USB 3.0-sporting Micro-ATX boards to make it to market.


Asus’ P7H55D-M EVO offers an attractive design and future-proofing with USB 3.0 support, but its slightly high price and relatively poor overclocking performance mean it falls short of a recommendation.