Asus’ range of P6T motherboards has been growing like Topsy since we reviewed the P6T Deluxe Palm OC Edition so let’s have a quick rundown before we dive into this week’s review of the P6T SE. In essence you’re getting two reviews for the price of one as the P6T Deluxe v2 has replaced the original P6T Deluxe. The only significant change is that the v2 has ditched the superfluous SAS controller and the price has been cut from £239 to £220. That’s money worth having but it wouldn’t have made much impact on our original review of the P6T Deluxe so we declined to review the v2 and plumped for the SE instead. 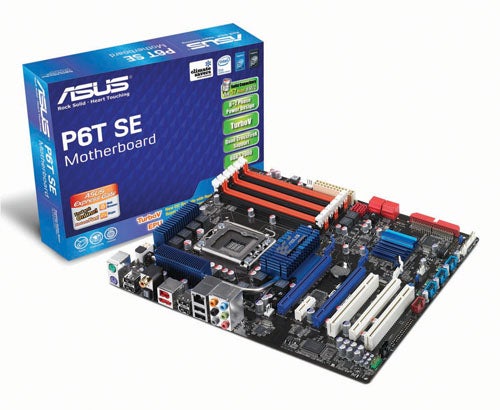 The basic P6T is significantly cheaper than the Deluxe at £170 and naturally there have been some cuts to the list of features such as the ditching of the second Gigabit LAN port and a reduction of USB ports from eight to six. There’s another less obvious change in the support for the graphics slots. All models of P6T have three mechanical PCI Express 2.0 graphics slots but the Deluxe offers Tri-SLI with either x16 / x16 or x16 / x8 / x8 lanes of PCI Express. The P6T only gives proper support to two slots with 16 lanes of PCI Express to each slot as the third slot gets a mere four lanes. So while it may look like a graphics slot it is really nothing of the sort.


The P6T supports both SLI and CrossFire X but the P6T SE does away with SLI support and only supports CrossFire X. This change means that Asus doesn’t have to pay a license fee to Nvidia and as a result the price dips below £160. If you own a pair of high-end GeForce graphics cards the P6T SE would be a poor choice but if you use a single graphics card or fancy a pair of Radeon HD 4890s, say, things are looking good.


The layout of the P6T SE hasn’t changed much from the P6T Deluxe. The ATA133 and SATA connectors have moved slightly but they are easy to use when the graphics cards are installed and that’s pretty much all we care about. The P6T SE uses a relatively basic cooling system on the chipset and only has a single heatpipe joining the coolers on the Northbridge and power regulation hardware behind the I/O panel. The coolers on the Southbridge and at the top of the board stand alone and are not linked to the others. 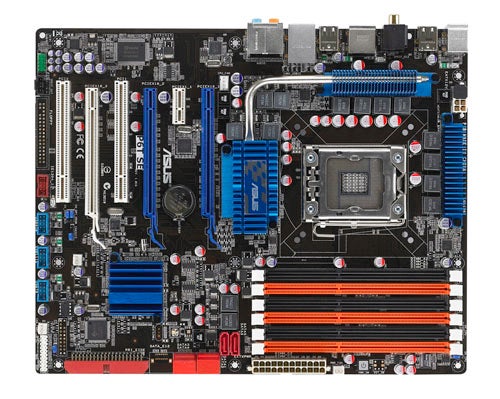 During our testing we were happy that the board remained reasonably cool at all times so the change to the cooling system seems to be perfectly satisfactory. It’s likely that Asus has been able to cut back on the cooling as the P6T Deluxe uses a 16+2 phase power system while the P6T and P6T SE have 8+2 phases. As we will see this affects the ability of the P6T to overclock.


The Deluxe has illuminated Power and Reset buttons at the foot of the board but the P6T SE only has a Power button and it has been moved up the side of the board outboard of the memory slots.


Asus has included three USB headers and one Firewire header on the board but there are no brackets in the package so you’ll be relying on case mounted ports if, like us, you feel that the six USB ports on the I/O panel is a bit feeble. You may be able to ease the situation if you plug your keyboard into one of the PS/2 ports.

That’s our only complaint about ports and connectors as the Realtek ALC1200 audio comes with both coaxial and optical S/PDIF and you get one eSATA port and one Firewire port on the I/O panel. The layout of the three long PCI Express slots gives the appearance that the board could easily be filled just with graphics cards but even if you install two double slot cards you’ll still have one PCI Express slot and one PCI slot available for expansion.


The first thing we observed was that the system memory runs at a default speed of 1,333MHz rather than 1,066MHz so we dropped the speed to get a base run of test figures that is comparable with other Core i7 motherboards.


At stock speeds the P6T SE performed the same as the Foxconn Blood Rage GTi and Flaming Blade motherboards that we have recently reviewed, which is what we would expect to see. 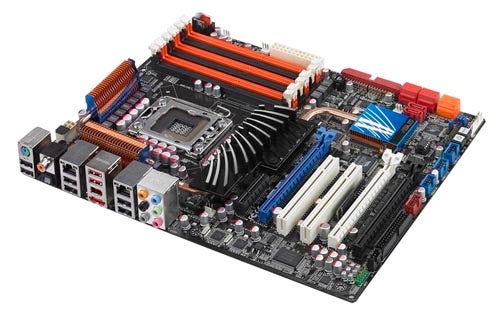 Overclocking the P6T SE was a straightforward process and it was a better experience than we expected. The Asus specification for the P6T SE suggests that a number of BIOS options for voltage settings would be missing compared to the Deluxe. Specifically vCPU PLL, vNB-PCIe and vDRAM are all supposed to be absent but we found the options were exactly the same as the Deluxe. Truth be told we wondered about the spec as the idea of a Core i7 motherboard with fixed DRAM voltage is absurd.


Those speeds were achieved with a conservative core voltage of 1.35V and we were able to achieve good results by running the system at 3.84GHz (24x160MHz). By raising the core voltage to 1.45V we were able to raise the clock multiplier to 30x133MHz to get a nice round 4GHz clock speed however performance tailed off at this point. The best performance was achieved on the standard 133MHz base clock with a 29x multiplier and a speed of 3.86GHz.


We had previously been able to overclock the P6T Deluxe to 4.13GHz (31x133MHz) so it looks like the cut down power supply hardware does indeed have an impact on performance as the P6T SE blue screened during benchmark tests on those settings – you pays your money and you takes your choice.


The P6T SE is a cut price gem that delivers marginally less performance than the P6T Deluxe but its price makes it very tempting indeed.