In the midst of the SLI craze Intel launched two new chipsets with the 955X being its latest performance solution. Although we’ve already seen the Intel board, the Asus P5WD2 Premium is the first partner product to arrive in our labs and Asus hasn’t spared any expense making this one of the best 955X boards on the market.


Interestingly the P5WD2 Premium incorporates two x16 PCI Express slots, although the second one didn’t seem to offer any functionality for a graphics card. However, Windows XP does detect a second graphics card in the slot and installs the drivers, but no extra outputs were to be found in the display properties. Asus also provides a soft SLI bridge in the box, but installing this did not enable SLI. 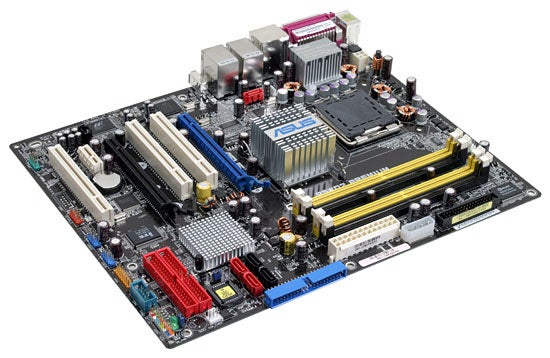 There are rumours about nVidia opening up SLI for other platforms later this year and Asus might just have prepared the P5WD2 Premium for such an event. At least you don’t have to source the SLI bridge connector in the future if this becomes an option. The second slot can still be used for x1 or x4 PCI Express cards, so it’s not useless by any means. The speed of the slot can be set in the BIOS and if you have a graphics card fitted in the slot you can select to use two or four lanes.


Having covered the least useful part of the P5WD2 Premium – at least for the moment – let’s take a look at some of the more useful ones. The Intel 955X chipset incorporates four SATA connectors and supports RAID 0, 1, 0+1 and 5 as well as Intel Matrix RAID. Asus has added a Silicon Image controller, but this has a special purpose. One of the ports is part of the rear I/O of the motherboard, which means that you can connect external SATA devices. How useful this really is without a power connector at the rear of your PC is a matter for discussion, but you can get external drive cases with SATA connectors. The second port is located just behind the I/O connectors, which isn’t an ideal location in terms of cable routing if you need to use it. 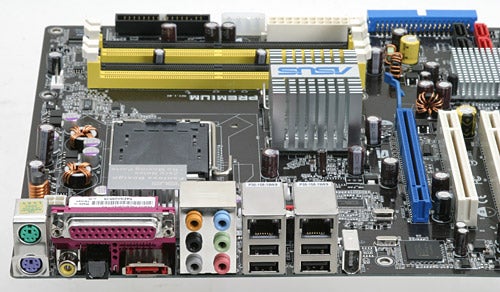 As with the last generation of Intel chipsets, you only get one IDE connector, although there are still more IDE than SATA devices in use, so Asus has remedied this by adding an IDE controller. This allows for a further four IDE devices to be connected, although it doesn’t offer any RAID support.

The P5WD2 Premium also comes with dual Ethernet, one Gigabit Intel PCI Express controller and one Gigabit Marvell PCI controller. Add to this FireWire, 7.1-channel Intel High Definition Audio with optical and coaxial S/PDIF outputs and this is a pretty well featured board. The board I/O consists of two PS/2 ports, a parallel port, four USB 2.0 ports, six audio connectors, the two S/PDIF connectors, a FireWire connector, dual Ethernet ports and finally the SATA connector. There are three PCI slots and a single x1 PCI Express slot for add-on cards.


One of the PCI slots will be occupied by the WiFi-TV card. This is something I’ve never seen as part of a motherboard bundle, although I can’t remember ever having seen a similar product in any shape or form. The card itself is fairly non-descript, but at least the dark PCB follows the theme of the motherboard. But it’s the features that matter here and Asus has combined an 802.11a/b/g WiFi card with a dual tuner analogue/digital TV card with built in FM radio! 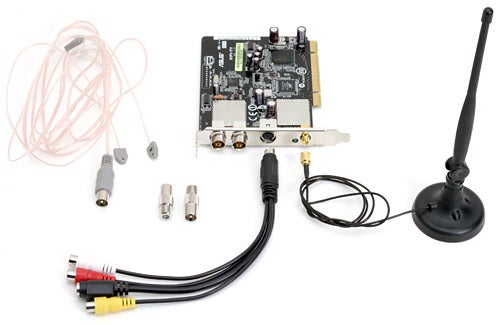 A sturdy desktop aerial for the WiFi functionality of the card is supplied as part of the package and with a magnetic base this can be placed on the side of your case – unless you have an aluminium one. The antenna can also be rotated and angled at 90 degrees which means that the aerial can be positioned almost anywhere while still achieving good range.


The digital part of the TV-tuner works with DVB-T which means that it works with Freeview in the UK as well as other free to air DVB-T channels were available. However, if you don’t have access to DVB-T transmissions you can still make use of the analogue part as well as the FM radio. But the features don’t stop here as the card also features video and audio input via a breakout cable. This has an S-video and a composite video connector alongside two RCA connectors for the audio. Finally you get an infra red remote control with a receiver that connects via USB. 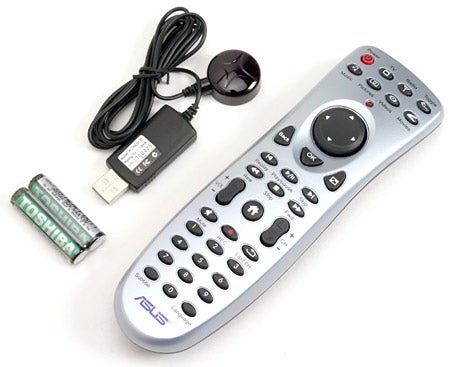 The rest of the accessories in the box consist of a FireWire bracket, a serial port bracket, yet another bracket with a game port and two USB 2.0 ports, five SATA cables, three SATA power adapters – two with two power connectors – three IDE cables and a floppy cable. You also get a copy of interVideo WinDVD Suite as well as a copy of CyberLink PowerCinema – to be used with the TV tuner card.


As this board is part of Asus’ AiLife series of boards it has some special features to reduce noise and improve heat dissipation. The bottom of the motherboard features Asus Stack Cool 2 which the company claims will reduce the temperature of the PCB by up to 20 degrees Celsius. It’s hard to validate this claim, but the passive MOSFET cooler and the two passive chipset coolers certainly seem to indicate that it works.

Rather unusually this board has an eight-pin AUX power connector which so far has only been found on server and workstation boards. This shows where the future power requirements of the Pentium 4 processors are heading, but for now it’s fine to use a standard four-pin AUX connector. Although this is a low noise board by default, there are three spare fan connectors in addition to the one for the CPU cooler. 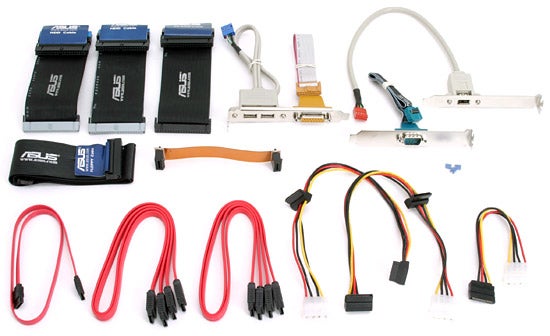 
So how far did the Corsair memory overclock to? Well, I didn’t manage go reach beyond 1GHz but then again Asus only claims that the board is capable of reaching 800MHz memory speeds. After some tweaking I got the TWIN2X1024A-5400UL modules up to 920MHz which is still quite an amazing overclock. These modules didn’t reach this kind of speed in our DDR2 memory group test so it goes to show that it’s not only the memory, but also the motherboard that limits your overclocking. 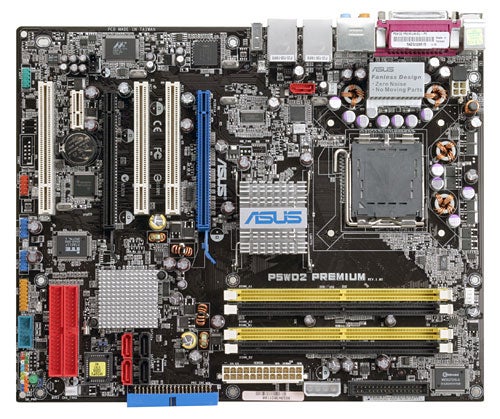 At £217.38 the P5WD2 Premium is one of the most expensive motherboards I’ve come across. You do of course get quite a lot for your money, but if you don’t need the TV/WiFi card, a version without this will set you back £153.30 which is far easier to swallow. Please note that the TV/WiFi edition of the P5WD2 Premium will not be available in the UK for the next couple of weeks due to Asus UK waiting for stock to arrive, but if you really do want a motherboard with ALL the bells and whistles, it’s worth the wait.


As expensive as this board might be, you do get a lot for your money and the performance results are beyond reproach. Asus has once again proven why it is the number one motherboard manufacturer in the world with another excellent product.