We’ve looked at a couple of desktop replacements recently, but for different reasons, the identically specced HP Envy Touchsmart 15 and the Toshiba Satellite P50t-A-10U didn’t do enough to get a solid endorsement from us. 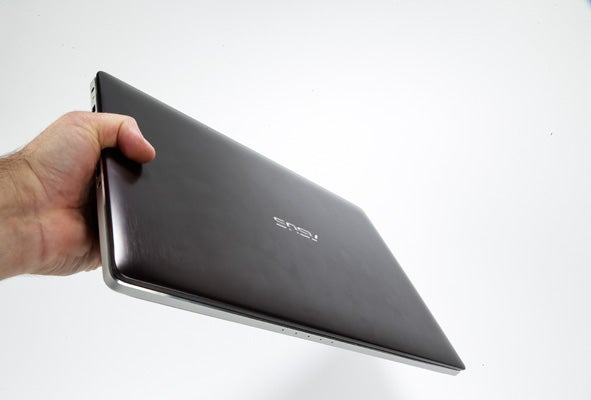 Well now ASUS is here with a desktop replacement of its own: the N550JV is a 15.6-inch i7 laptop with 8GB RAM, a Blu Ray drive and a GeForce graphics card retailing for a grand. On paper it sounds great, but how does it perform?

The N550JV certainly looks like a premium product. Although it’s a 15.6-inch laptop, it’s surprisingly svelte, measuring just 27.7 millimetres thick, and its curved base and lid exude a high quality feel. Despite its thinness, it feels solidly built, and at 2.6kg while not unusually heavy, you will always know it’s there. The top of the laptop is black with a brushed metal finish and just the ASUS logo in the centre. The underside is also black, smooth and minimalist but in a plastic finish.

Opening it up presents a whole different colour scheme with a silver keyboard area and touchpad. Around the top there are two circular buttons with a series of blue dots around them: one is the power button and the other brings up the ASUS console – a neat Windows overlay which shows you laptop analytics at a glance. The chrome finish is for the most part quite stylish, but the keys themselves look sparkly enough to take away some of the premium sheen for us. 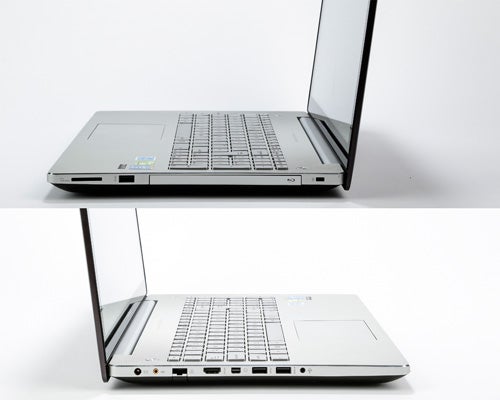 There are a number of lights below the touchpad indicating power, battery, hard disk access, locking and wi-fi. Elsewhere the connectivity is impressive: there’s an ethernet jack, an HDMI port, a mini video out, three USB ports, a shared headphone and microphone jack, an SD card reader, a port for the Bang & Olufsen external mini subwoofer (more later) and a Blu Ray drive. In short, there’s pretty much everything you could need here.

The N550JV comes with a 15.6-inch 1920×1080 touchscreen, and it’s pleasingly sharp, as the resolution suggests – though obviously smaller displays of the same resolution appear sharper. The flipside of this, of course, is that as a touch screen it offers a larger area for the comparatively inexact finger swipes, and is decent to use, especially in the Windows tablet mode areas. In desktop mode, it’s a little tougher to be accurate, but it’s not a bad performer at all, let down slightly by the slight flimsiness the screen when it should be locked in a position: tapping it will make it wobble a little bit. 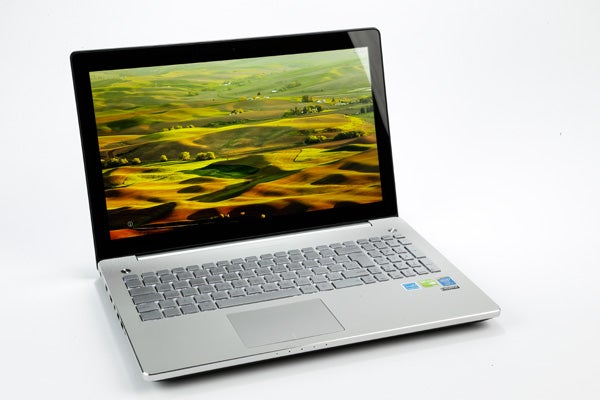 Viewing angles are good – there’s very little distortion when you deviate from a head on angle as is the case with some screens, and in fact you can still see text clearly from angles long after it would be impractical to work with. The brightness is good, the colours are bright and accurate: not washed out or over-saturated, and icons look sharp too. The only downside we can find with the screen is like other touchscreens, close inspection shows a faint gridlike meshiness over the icons. It’s not as pronounced as some we’ve seen, and it doesn’t take much away from what is a generally impressive screen.