The Asus Memo Pad 7 runs Android, version 4.4.2. This is about as new as you’ll get Android devices at the time of writing, but with Android L on the way and no word of an update for this tablet, it may not stay that way for too long.

The custom interface Asus has laid on top of Android at least adds a few features anyway. In most respects it’s a fairly inoffensive reskin. There’s a custom lock screen, and both the menu systems and notifications bar have been given a pleasant, more cartoony redesign. 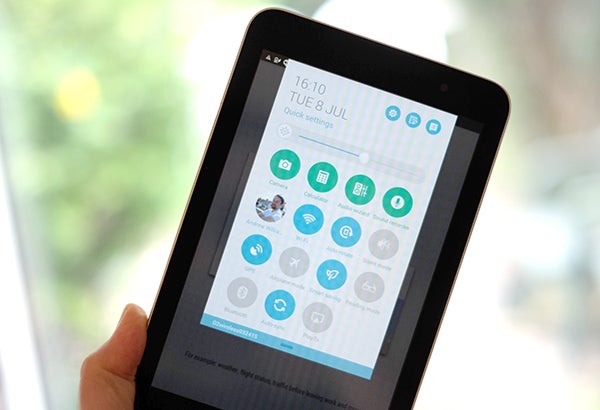 Much like the hardware design of the Asus Memo Pad 7, the look of the software is not downright impressive, but it’s fairly practical. There’s just some missing element of style that’s hard to define, other than as being absent.
Still, we can happily live with it. What’s more annoying is the number of extra bits of app fluff Asus has jammed into the Memo Pad 7.

There are around a dozen apps we wish Asus had left out of the tablet, because we imagine they’ll do little more than litter the apps menus of most buyers. The most cotton wool-like include the Mirror app, the Omlet social app and a rather naff Accuweather weather app. 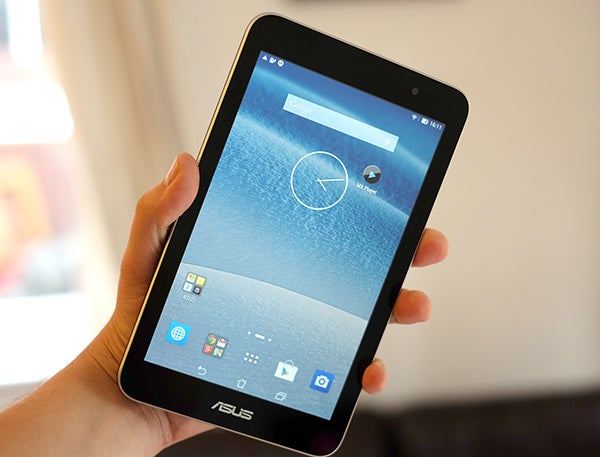 There’s a saving grace, though. The Asus Memo Pad 7 lets you ‘hide’ apps, and these superfluous extras really don’t take up too much space. Will buyers even realise they can do this? Probably not, but at least there’s a way to clean up the tablet’s act for enthusiasts.

Another little extra the Memo Pad 7 doesn’t shout about is the ability to “lock” apps. You can select certain apps that you want to be password protected. It’s a great way to prime the tablet so that kids can use it without stumbling onto something they shouldn’t, and all without locking the kids down to an overly childish interface.

We commented earlier that the Asus Memo Pad 7 is a whole lot like Asus’s budget tablet from last year. Where it really differs is its CPU.

The new model has a quad-core 1.5GHz Intel Atom Z3745 processor, which is part of the Bay Trail family of chips. 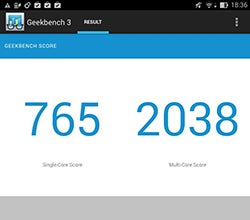 While it is a chipset designed primarily for low-cost Windows and Android devices, it has a lot of power on tap for a tablet this cheap, and its 1GB of RAM isn’t too bad either.

The Geekbench results tell the story pretty simply. The Memo Pad 7 scores around 2038 points, a slightly better result than the Google Nexus 7 or even the Samsung Galaxy S4 phone. It’s a great score for a sub-£130 tablet. Far more important, though, is how this power translates to real-world use.


We’re very happy with the performance of the Asus Memo Pad 7 for a budget tablet, but we don’t really see all that much evidence of the processor’s power in use. There are still minor pauses when browsing through the interface, most likely caused by Asus’s software. Menus often take a moment or two to pop up, and getting in and out of standby takes a little longer than it should at times. 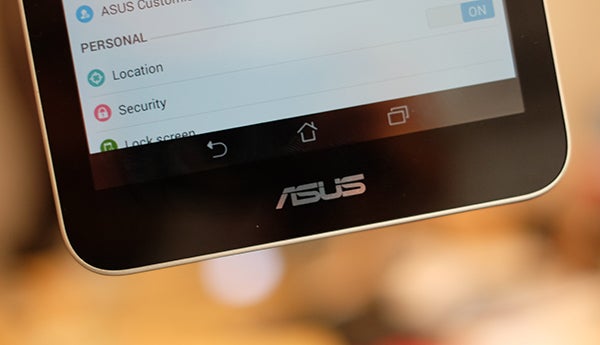 Games don’t look anywhere near as good as they do on a higher-end device either.

This is largely down to the resolution – both 2D and 3D games look either a bit pixellated or jageddy thanks to the Memo Pad 7’s 1,280 x 800 pixel display. But it also seems to be partly down to the processor.

We noticed that in some games you appear to miss out on some of the fanciest visual effects, which you do get with the Snapdragon 800 processor. It’s things like extra gloss in reflections in water, and off the road in racing games like Asphalt 8.

Having loads of power is great on paper, but it doesn’t mean a great deal if it doesn’t equate to a significantly better experience. To restate, though: performance is still good for a £130 Android tablet – better than the Tesco Hudl or 7-inch Amazon Kindle Fire.