Windows Mobile is beginning to look seriously dated these days. So much so that manufacturers are having to come up with increasingly innovative, feature-packed hardware to convince the public to buy, and the version for non-touch screen devices is having the hardest time of it. Despite the fact that, of the two flavours of Windows Mobile, it’s slightly better suited to its purpose – it doesn’t have all those hangovers from the PDA days, such as fiddly dropdown menus and nasty little checkboxes – it just isn’t sexy enough in today’s ultra-competitive smartphone market, and is now looking well past its sell-by date.

Asus’ latest smartphone – the M930 – makes a pretty good stab at reviving it, though. From the front this looks simply like a very chunky standard phone. It has a small, 2in 240 x 320 screen, a numeric keypad topped with a directional control and a fairly standard sprinkling of other buttons. There’s a 2-megapixel camera on the rear. On the right edge is a microSD memory slot, along with a volume rocker and shutter release. On the bottom is a mini-USB socket and 2.5mm hands-free headset socket. There’s nothing particular of note.


Pick it up, however, and your opinion begins to change. There’s no getting past the bulk and weight of the phone, which at 113 x 54 x 18.7mm and 158g make it wider, taller, thicker and heavier than the slightly disappointing HTC S730. But it’s a much nicer-looking phone than the HTC device. Its style is perhaps best described as industrial-executive: not only does it feel incredibly solidly made – there’s barely a rattle or loose key anywhere about this phone’s sturdy person – but it is also adorned with shiny phone jewellery in all the right places. That directional pad, for instance, is finished in brushed aluminium effect, as are the slim soft keys just below the screen; and the screen’s glossy black surround and narrow chrome trim manage to offset the eyesore of Microsoft’s ugly duckling operating system very successfully.

There is of course a reason for the M930’s extra bulk – a keyboard. But instead of a sliding to open, the M930 sports a hinged mechanism, which opens up with a satisfyingly hefty thunk. The full qwerty keyboard underneath is impressively spacious, too, has a directional control pad on the right and even a dedicated number key row running along the top. Above it, set into the underside of the lid is an extra screen, this one slightly larger than the one on the front at 2.6in, and a slightly higher resolution of 400 x 240. 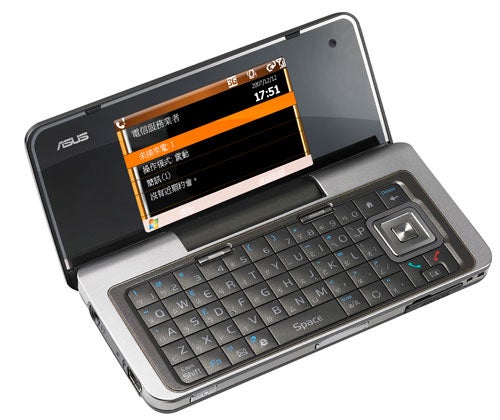 It looks fantastic and in use it works just as well. The keys are responsive and the fact that the edge of the screen doesn’t encroach on the top of the keyboard means it feels far less cramped in use than even the TyTN II’s keyboard. Thumb-typing on this is a breeze, so it’s a disappointing that there’s no means of document creation or editing supplied with the phone. The Office folder merely links to Word, Excel, PDF and PowerPoint reader apps – you’ll have to add your own office applications if you want to use this device as a mobile workhorse.


But the keyboard is not without fault. As with many other phone mini-keyboards you have to click a function key to access symbols such as @, &, $ and £, but on the Asus M930 it doesn’t lock on a single click. This means you have to hold it down (as on a full-sized PC or laptop keyboard) while you stab the required key. It’s awkward and clunky and a poor design choice, and undermines the excellent work done on the keyboard. It’s a small complaint, and there is at least a dedicated shortcut key for launching the on-screen symbol selection screen. I found myself resorting to this most of the time.

Elsewhere the M930 is pretty well put together, and boasts a decent feature set. It doesn’t have the GPS functionality that many of its touch screen brethren do, but with HSDPA speeds up to 3.6Mbit/sec, mobile data flies – and browsing the web is a none-too-shabby experience once you’ve installed a decent browser such as Opera Mini. There’s also 802.11b/g Wi-Fi, Bluetooth 2.0, you get a nice leather belt case included in the box, and battery life isn’t bad either, though two days of standard use per charge isn’t exactly ground-breaking.


Software-wise there’s an extra or two as well, with an application that allows you to control presentations on a laptop over Bluetooth, plus a streaming media player and an encryption tool. The latter allows you to keep sensitive documents and other information in a PIN-protected environment.


Despite the rather austere Windows Mobile interface, the M930 is actually a pretty successful phone. It is bigger than the HTC S730, but its solid build and phone-like feel mitigate this. I like its bigger screen hidden under the lid too. I certainly like the spacious, responsive keyboard. And I like the fact it has a pretty sensible line-up of phone hardware – there’s no GPS, but mobile data is swift at 3.6Mbit/sec HSDPA and you get Wi-Fi included as well.


It has a flaw or two – the implementation of the function key is just bonkers, and the camera isn’t very good – but these are minor issue. True it’s more expensive than the HTC S730, but you should be able to get it free on some kind of contract soon, and that will make it a tempting proposition for those who prefer the more phone-like functionality of Windows Mobile standard.