When we reviewed the Asus Crosshair III Formula we talked about the major change that Asus had made by switching from an nVidia chipset to ATI silicon. This change reduced the price of Crosshair III compared to Crosshair II but, of course, also required you to switch from SLI graphics to CrossFire if you wanted a multi-card setup.


That could be a deal breaker for staunch fans of nVidia so, if that’s you, the Asus M4N82 Deluxe may well pique your interest as it looks like a true update to Crosshair II, complete with nVidia chipset and SLI graphics.


The chipset in question is nForce 980a SLI which sounds as though it should be fairly new but it is actually the same 780a SLI that we saw on Crosshair II. For some reason nVidia keeps thinking that renaming its products somehow adds value to our PC experience.


The issue here is that nForce 780a/980a is relatively aged and as a result it supports Socket AM2+ (although you can install a Socket AM3 processor) and as a result the memory slots on the M4N82 support DDR2 rather than DDR3.


In many respects the M4N82 Deluxe is an update of the M3N-HT Deluxe which is built around the nForce 780a SLI chipset. If you click the link you’ll see the picture shows a ”Mempipe” model that has an extensive passive cooling system that links your RAM to the chipset cooler, but for the purposes of this conversation we’ll ignore that particular feature. 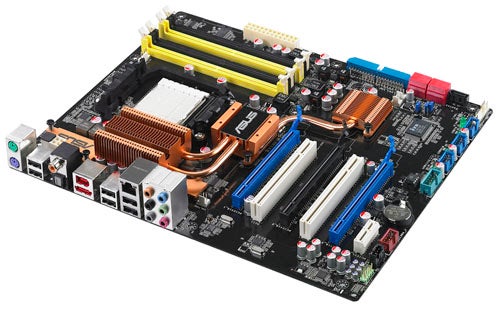 As we mentioned the nForce 980a SLI chipset that lies at the heart of the M4N82 Deluxe is nothing more than an nForce 780a SLI with a new name. The differences between the M3N-HT and M4N82 are, therefore, rather slight as the M3N-HT supports up to 8GB of RAM and has ten USB ports while the M4N82 can support up to 16GB of memory with 12 USB ports. In fact that’s not entirely accurate as both models have headers that support six USB ports so the real difference is that M3N-HT has four USB ports on the I/O panel while M4N82 has six ports.


Asus isn’t relying on the power of nVidia’s marketing machine to make nForce 980a SLI sound more interesting than it truly is and it has added a few tweaks to the M4N82 such that the manual is full of references to EPU, Express Gate, Turbo V, Turbo Key and Anti Surge.


Then again Asus is charging £20 more for the M4N82 than it does for the M3N-HT so we ”would” rather hope that it adds a little something to sweeten the deal.


If we accept that the M4N82 is an evolution of the M3N-HT then it is clear that Asus has had a good long while to develop this motherboard but even so the M4N82 has seen no fewer than five revisions to its BIOS.


Plugging the board together is quick and easy provided you don’t attempt to connect a drive into the fifth SATA port as legacy support is restricted to ports 1-4. The fifth port only operates if you use AHCI or RAID but Asus has thoughtfully used different colours on the connectors to differentiate them.

The chipset cooler has been lifted from the Mempipe model with the result that the heatsink on the Northbridge is a peculiar block with channels and female threads that are ready to accept the non-existent Mempipe accessory. It looks unusual and it also rang alarm bells as Nvidia chipsets have a deserved reputation for running worryingly hot so we had rather hoped to see a huge cooler with lots of fins to increase the surface area. That said, the M4N82 behaved itself impeccably during testing and the chipset cooler maintained a steady temperature of 50-55 degrees Celsius.


When it comes to cooling Asus has included a total of four fan connectors; one four-pin for the CPU cooler and three three-pin connectors labelled up for two chassis fans and the power supply. That’s perfectly reasonable but we were staggered to see that two of the fan connectors are directly in line with the second graphics slot where they will be blocked by any graphics card bigger than a GeForce 8800 GT. This isn’t one of those esoteric problems that will only affect gamers who run triple GTX 295, it will hurt anyone who runs SLI and fancies the idea of running more than one case fan.


The weird thing is that the fan connectors on the M3N-HT Asus were located down by the third graphics where they were out of harm’s way.


The rest of the layout doesn’t throw up any surprises as the other components are located sensibly and have plenty of room. On the I/O panel there are two PS/2 ports, six USB 2.0 ports, Gigabit LAN, one Firewire port, a SATA port, optical and coaxial digital audio outputs and surround-sound mini-jacks. 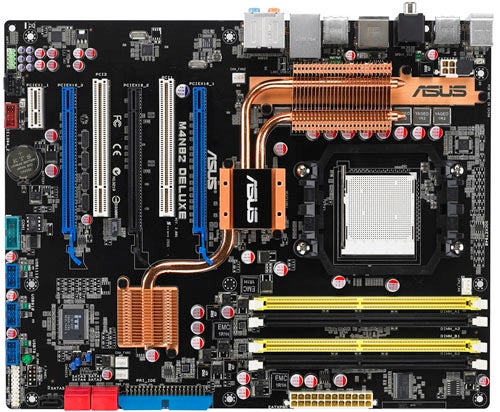 Asus includes a fair stack of software on the DVD. In addition to the usual drivers and copy of Acrobat reader you’ll find AI Suite for overclocking and Asus Cool ‘n Quiet to monitor CPU frequency and voltage. For some reason there isn’t a copy of the AMD OverDrive overclocking utility, though.


AI Suite promises great things as it allows you to configure the power button on your PC case as an overclocking tool. No, honest, it’s true. The feature is called Q Button and you can configure the power button to run one of three factory profiles called Race Car, Jet Plane and Rocket. The default is Rocket i.e. the fastest, and we were keen to see the toy in action. We opened AI Suite, chose our settings, pressed the power button and watched an icon pop up on the screen. We braced ourselves for massive performance so you have to imagine our disappointment when the CPU performance increased by a mere five percent.


Thankfully we did somewhat better with our efforts at manual overclocking and increased the speed of our Phenom II X4 810 from 2.6GHz to 3.38GHz without any trouble. This is the same clock speed we achieved when we reviewed the Asus Crosshair III Formula though performance wasn’t quite so good. However, the difference is only in the order of a few percent so this rather old and crusty nVidia chipset still did a decent job.


We’d like to see nVidia deliver a Socket AM3 chipset that marries DDR3 memory with SLI graphics but something tells us that is unlikely. In the meantime the Asus M4N82 Deluxe delivers decent performance and a reasonable list of features that is topped off with Tri-SLI.