In many respects the Asus M3A79-T Deluxe is an update of the M3A32-MVP Deluxe that we reviewed last December. The M3A32-MVP is a regular AMD 790FX motherboard with an SB600 Southbridge that supports CrossFire X with four PCI Express graphics slots but it suffered from a fundamental issue at the time of review as we were testing with the original B2 Phenom CPU.


The combination of 790FX and B2 stepping of Phenom was something of a disaster and we were unable to overclock by even the tiniest amount. This was very bad news as competing Intel processors such as the Q6600 offered better performance than Phenom and overclocked magnificently so it was almost impossible to make an argument in favour of the 790FX chipset or the Asus M3A32-MVP.


Imagine our surprise when the M3A79-T Deluxe arrived as it looked to be the absolute spitting image of its M3A32-MVP Deluxe cousin. The only visible difference is that the older model included a piece of hardware named Cool Mempipe which screws to the Northbridge cooler and extends the passive cooling system to your system memory.


The new M3A79-T has the necessary mounting holes on the Northbridge cooler but there is no Cool Mempipe in the box. This seems perfectly reasonable as the memory doesn’t get especially hot in a Phenom system and the whole thing felt like a bit of a gimmick anyway. 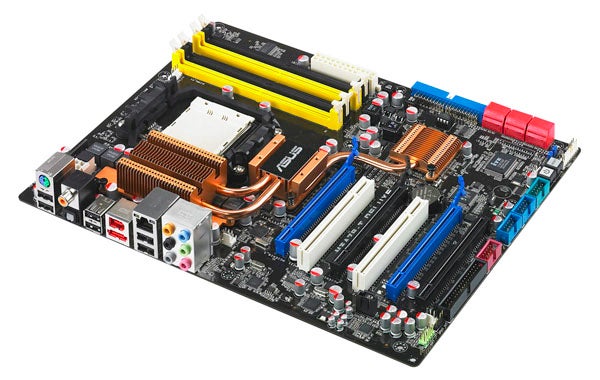 There’s another, less obvious, change in the new motherboard though, which is where things get interesting. Asus has updated the Southbridge from SB600 to the new SB750 that was introduced with the 790GX chipset. We’ve reviewed two 790GX motherboards recently with mixed results as the Foxconn A7DA-S allowed us to overclock our Phenom X4 9850 to 3.1GHz while the cheaper Biostar TA790GX A2+ didn’t overclock at all.


We hoped that the M3A79-T would offer us the prospect of a 790FX motherboard that would overclock with ease while adding the benefits of the new south bridge. Before we get down to performance testing, though, let’s take a quick look at the layout of the Asus.


If you look at the M3A79-T from a short distance you’d be unable to tell whether it was intended for Intel Core 2 or Phenom. The layout follows the tried and true Asus form with the EATX power connector at the top of the board, the Northbridge below the CPU socket and the main power connector outboard of the memory slots. The six SATA connectors and single IDE are laid down to steer the cables away from even the most monstrous rank of graphics cards and across the foot of the board there are header connections and micro buttons for Power and Reset.


The only oddity that caught our eye is that two of the USB headers are in the usual position at the foot of the board between the Firewire header and a Serial connector while the third USB header is located at the very top of the board above the power regulation hardware – ideas on a postcard, please.


The four PCI Express 2.0 slots are spaced out reasonably well however the third graphics slot is close enough to the fourth that you won’t be able to install four double slot graphics cards if such a ludicrous idea took your fancy.

On the I/O panel there are six widely spaced USB 2.0 ports, a single PS/2 port that can be used for a mouse or keyboard (Ed: we like this feature), analogue and digital audio connections, one eSATA port, one Firewire and Gigabit LAN. Asus supplies a bracket in the box with two USB ports and one Firewire port. Unlike the 790GX models there are no graphics connectors as the Asus doesn’t have integrated graphics.


The Asus DVD has a one click routine for installing all the drivers you need and the utilities part of the disc includes a copy of AMD OverDrive 2.1.2. That might seem like a minor matter but for some reason we didn’t get this software with either the Biostar or Foxconn and had to download it from AMD’s website so the inclusion is definitely welcome.


Once the software was installed we could see that the default speed of the DDR2 memory was 800MHz rather than the 1,066MHz that we would hope for with Phenom. The passive cooling system on the chipset and power regulation hardware rapidly rose to 40 degrees running Windows and over 50 degrees when the system was working hard during benchmarks. Although the system was stable we felt this was unpleasantly warm and used a case fan that kept the temperature below 40 degrees.


We tested the M3A79-T Deluxe with the same Phenom X4 9850 that we used with the 790GX motherboards but here we hit a bit of a snag with the testing figures. The thrust of 790GX is either to use integrated graphics or to add a low powered graphics card in Hybrid CrossFire but that makes little sense with the 790FX so we plugged in our faithful old GeForce 8800GT. When you’re looking at our PCMark05 test results you need to ignore the Graphics and Overall scores and instead focus on the CPU and Memory elements – PCMark throws up inconsistent graphics scores when using the same graphics card. 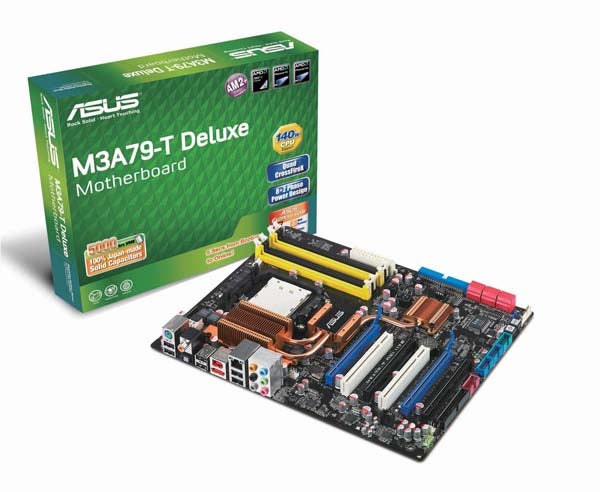 After an initial run at default speeds we overclocked the memory to 1,066MHz which is the correct default speed for Phenom and saw the performance drop significantly. This was very odd and things got odder when we pressed the OverDrive software into action. Each time we tried to enable the ACC (Advanced Clock Calibration) feature the system froze during the necessary restart. It was such a solid freeze that the on-board Power button didn’t work and we were obliged to turn off the mains power and use the Clear CMOS jumper.


This wasn’t what we had expected at all and meant that we were unable to increase the clock multiplier. Instead we gave the Asus Jumperfree configuration in the BIOS a whirl which keeps the multiplier fixed and raises the reference clock speed.


The +10% overclocking profile raised the reference clock from 200MHz to 220MHz and performed splendidly so we went to +15% and then +20% to hit 3GHz. The final step would have been +30% however that was a non-starter and the Asus refused to POST so overall the Asus M3A79-T lived up to our expectations by overclocking the Phenom X4 9850 to almost the same extent as the Foxconn A7DA-S but using a completely different method.


It also means that we continue to be mystified by the SB750 Southbridge and still cannot decide where the credit should go for Phenom’s newfound ability to overclock.


Asus has taken a bold step by adding the new SB750 Southbridge to the AMD 790FX Northbridge but for the most part it seems to have worked. However, we still can’t see fit to recommend opting for a performance AMD board over an Intel one.