With AMD moving to Socket-939 the days of Socket-754 seemed numbered. But the Sempron processor took over where the Athlon 64 left off and for those looking for an upgrade for their current Socket-754 Athlon 64, Asus has the complete solution. The K8N4-E Deluxe/Extreme N6600 is a motherboard and graphics card bundle which brings your Socket-754 processor in to the PCI Express era.


Let’s start with the motherboard. Deluxe tends to be a good thing in model names, as it means you’re getting all the trimmings. The K8N4-E Deluxe might be a low-end PCI Express board, but it’s far from a budget model. Asus is using the nVidia nForce4-4x chipset which offers all of the functionality of the nForce4 chipset, but with a couple of limitation. 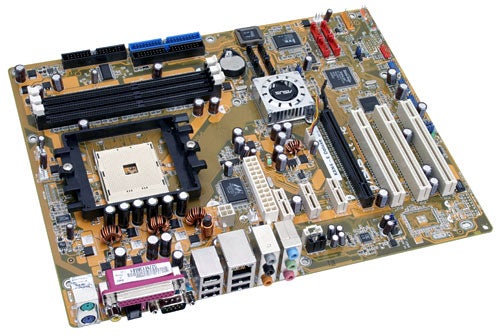 The nForce4-4x only supports 800MHz hypertransport speed, but as all Socket-754 processors are stuck at 800MHz this really doesn’t matter. The other limitation is actually down to AMD rather nVidia, as the Socket-754 CPUs only support single channel memory. As the nForce4-4x is a version of the standard nForce4 chipset rather than the Ultra version it lacks the ActiveArmor Secure Networking Engine. I think nVidia has made a huge mistake here, as it is those users with a low spec PC that really need the CPU offload that the ActiveArmor Secure Networking Engine can offer if you take advantage of the nVidia Firewall.


There is no native support for 3GB/sec SATA II drives either, as the standard nForce4 chipset only supports 1.5GB/sec SATA drives. The native SATA controller supports RAID 0, 1, 0+1 and JBOD configurations. A Silicon Image controller adds a further four SATA connectors and add RAID 5 to the RAID features of the native controller. You also get two IDE connectors that support up to four drives. 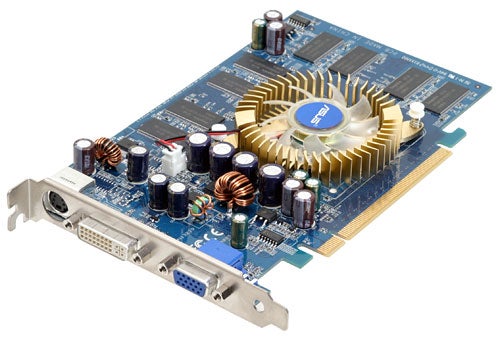 
7.1-channel audio is also part of the package courtesy to a Realtek ALC850 codec. This can’t compare with the high definition audio offered on the latest Intel chipset boards, but it’s decent nonetheless. Apart from the 7.1-channel outputs the motherboard also has a line in, mic in and optical and coaxial S/PDIF outputs. For those still in need of legacy ports apart from PS/2 for keyboard and mouse, Asus has retained a single parallel and serial ports.

The board layout is rather unusual with the x16 PCI Express slot positioned in the middle of the motherboard. Above the x16 slot are three x1 PCI Express slots and below it are three standard PCI slots. Asus has fitted plenty of fan headers as well, with two at the top of the board close to the CPU and a further two usable fan headers further down. The chipset heatsink is fairly small and Asus has chosen to fit a small fan to it. To be fair, it wasn’t all that noisy, but considering that the x16 PCI Express slot is out of the way of the chipset cooler I would have preferred a passive solution. 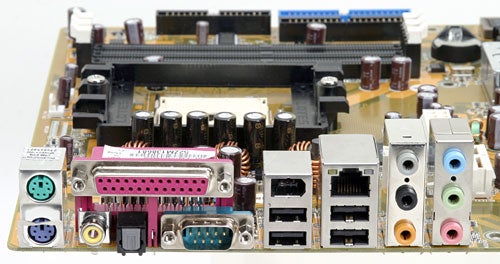 Apart from the three rear brackets Asus also supplies four SATA data cables, three SATA power splitters – each with two SATA power connectors – two ATA133 IDE cables, one ATA33 IDE cable and a floppy cable. You also get a copy of interVideo WinDVD Suite and Norton Internet Security 2005. The manual is pretty good and covers most of the information you need to know and then some.


So far so good, so let’s take a look at the graphics card. The Extreme N6600 is a fairly standard 6600 PCI Express card with 3.6ns memory. Asus has fitted a custom cooler which produces a reasonable amount of noise. The card has D-SUB, DVI and S-Video outputs and Asus supplies a DVI to D-SUB adapter as well as an S-Video to composite video cable.


It might not be the best graphics card on the planet, but this bundle isn’t really intended for anyone who’s into high-end gaming. For anyone with a GeForce FX5900 XT or slower, this will definitely be a decent upgrade.


To test the performance of this bundle I used an Athlon 64 3400+, 1GB of PC3200 DDR SDRAM and a 120GB IDE hard drive. These are components I could see a potential buyer using with this bundle. The overall SYSmark 2004 score of 163 isn’t breathtaking but it’s not terribly slow either. The PCMark 2004 score of 4140 is more in line with what I expected to see from a setup like this. 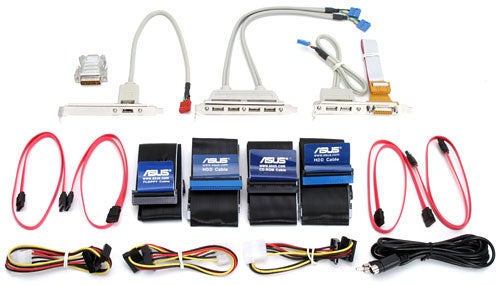 
What it finally comes down to is cost, and at £159.80 inc VAT this Asus bundle offers pretty decent value – especially when you consider that you can easily spend far more than this on a graphics card alone. This is not a high-end kit, but if you already have a Socket-754 processor and want to upgrade to a PCI Express platform, then your choice is somewhat limited. Asus offers the motherboard on its own at a lower cost of course, if you would rather fork out for a faster graphics card, but on the whole the supplied card seems like a fair complement to the Socket-754 CPU that will be driving it.