Earlier in the year Nvidia announced a rather cool new technology. It’s called Nvidia Optimus and it finally makes graphics switching, where a laptop can choose between an integrated graphics chipset (for improved battery life) and a dedicated chip (for better performance), a mainstream feature. How? By doing it automatically, on-the-fly, and with no input required from the user. We’ve been waiting patiently for Optimus laptops to go on sale ever since, and the Asus K52JC is the first to land in our labs. 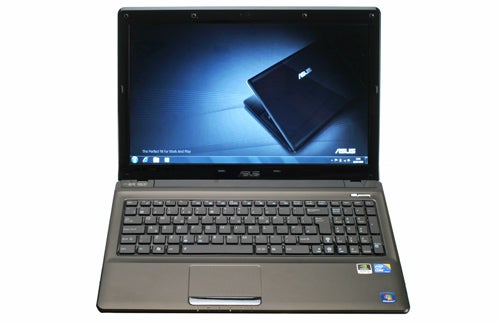 If you’re interested in the nitty gritty of Optimus, it’s worth taking a look at our Nvidia Optimus Guide. We’re going to focus on the K52JC, though, and truth be told it’s not the most obvious candidate for the technology. With a 15.6-inch display and a weight of 2.5kg, it’s not exactly portable, making the potential power saving something of a diminishing return. It’s akin to making a hybrid Bugatti Veyron.


Nonetheless, if Optimus boosts battery life a little and keeps the system running coolly and quietly, then it’s doing some good. Also doing some good is the 2.26GHz Intel Core i5 processor that powers the K52JC, a processor that’s proven to be an ample performer in the past. It’s backed up by a plentiful 4GB of RAM, and a 1GB Nvidia GeForce 310M dedicated graphics card offers the performance option. For storage you get a 500GB hard drive, while Wireless-N Wi-Fi and Bluetooth 2.1 take care of the wireless connectivity. 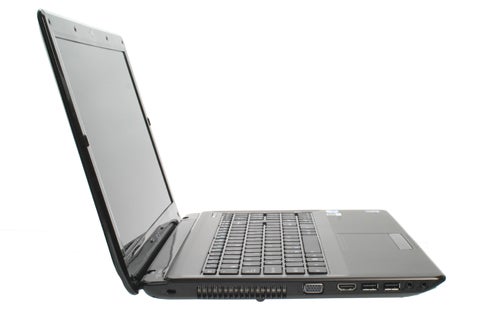 As a design the K52JC is actually rather nice. Its glossy dark brown lid and textured brown innards form a good alliance with the gloss black bezel, and Asus doesn’t try to over elaborate like some manufacturers. It’s never going to win any awards for design, and at 34.5mm thick it’s a little on the chunky side, but neither will it embarrass you with tackiness.


For the most part it’s a well-built machine, too. We found no ill-fitting or over-flexing panels, and the hinge action on the screen is smooth yet secure. Putting pressure on the screen didn’t transmit too much to the LCD panel either, which is always an encouraging sign. Moreover, Asus offers a two-year warranty on all its laptops, which adds a little value to the machine and some peace of mind. 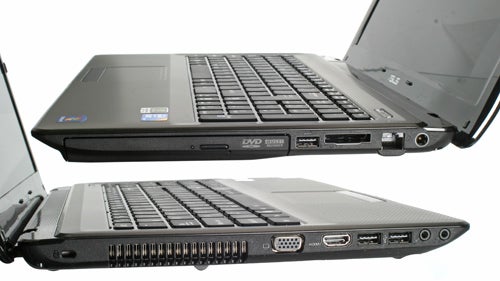 One slightly disappointing aspect of the K52JC is its connectivity. It has all the basics, including HDMI, VGA and three USB ports, but it doesn’t extend much beyond these. Consequently there’s no eSATA, no standby USB charging, and no ExpressCard slot. This severely limits your options for connecting fast external storage devices, as you can’t use eSATA and there’s no option to add an ExpressCard module as expansion.

Another underwhelming aspect of this laptop is its keyboard. One bonus is the presence of a number pad, and the basic layout is actually very good indeed. However, the key actions are shallow, lack definition, and – unlike the machine as a whole – the whole keyboard suffers from significant flex. Every keyboard normally has a little, but here it’s enough to seriously detract from the overall experience. 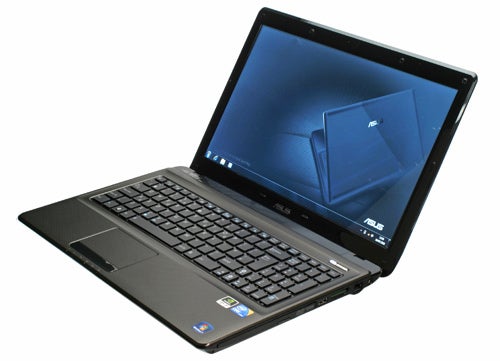 By contrast the touchpad is pretty much flawless. It’s well-proportioned, positioned to avoid contact when typing, and has a nice, low-friction surface. It has multi-touch, naturally, and all the various gestures work perfectly well. Its buttons, meanwhile, exemplify the kind of quality so sadly lacking in the keyboard. 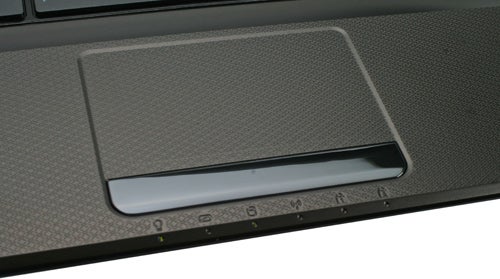 At this price, one rarely expects great visual splendour from a laptop display, and so it proves with the K52JC. Its 1,366 x 768 resolution is pretty standard for the size and price, and it produces passable colour fidelity and dark detailing in videos. However, it’s not particularly bright, and the viewing angles are characteristically shallow. It’s no worse than many similarly priced laptops and is perfectly usable, but it lacks any particularly redeeming qualities. 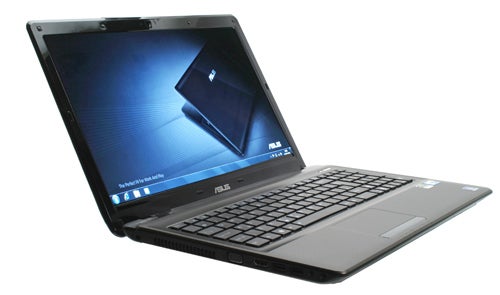 It’s a similar story for the speakers. They’re not bad, managing decent clarity at high volumes, but they lack the bass and the mid-range richness to be anything more than a fallback for when you don’t have some headphones or speakers to hand. It’s also puzzling why, considering this is a fairly large laptop, Asus has shovelled them in beneath the front edge of the machine instead of in a more prominent position.

All-in-all, in use the K52JC is as middle-of-the-road as they come. To an extent this is to be expected given the price, but the flexing keyboard is a major disappointment.

In general the K52JC’s performance is good. Its Core i5 processor has the power to deal with most tasks with no problems and, unlike the Core i3 processors found in the compared Samsung R580 and Toshiba Satellite A660-14C, it has Intel’s Turbo Boost feature. This will apportion more power to a single-core when the other isn’t being used, and can have a significant impact when using single-threaded applications.

You can see this advantage in the system performance results, as the Asus scores noticeably higher. This extra performance should prove beneficial in many applications, but if you’re just surfing the web or working on documents then both the Samsung and Toshiba have ample performance for all needs.


Moreover, as the gaming testing reveals, neither the faster processor nor the 1GB of video memory has much benefit for gaming. Indeed, the K52JC is actually outperformed by both our compared systems, albeit not by a massive amount. This isn’t to say the K52JC is a bad system for gaming, it does an okay job for the money, but it’s no better than many cheaper laptops, too.

More worrying, however, is the mediocre battery life on offer. It only just edged over the three hour mark in the productivity test, and fell short of two in the DVD playback test. Evidently Asus, rather than enjoy the increased battery life potential of Optimus, has simply used a lower capacity battery and pocketed the difference – it’s rather like opting for an upgrade on Apple’s website. As the K52JC isn’t that portable it’s a somewhat understandable decision, but it does make the presence of Optimus somewhat moot.

Such issues are exacerbated by the fact the K52JC isn’t that great value. You can find the Samsung R580 for around £599, £90-odd less, and the Toshiba Satellite A660-14C is available for a similar price but brings with it a Blu-ray drive and some excellent speakers. Asus’ two-year warranty adds some value, but taken as a whole the K52JC lacks any specific selling point.


As a debut for Optimus the Asus K52JC is an inauspicious start. A better keyboard would do much to improve this machine, but it lacks any inspiring features and it doesn’t offer great value for money. None of this is the fault of Optimus of course, but it’s a shame the K52JC doesn’t showcase its potential better.