Big, bulky and expensive. For better or worse, this is a classic gaming notebook.

Few laptops stand out like the ASUS ROG G752VT, with its striking brushed-aluminium chassis, bezelicious 17.3-inch Full HD display and Stealth Fighter-esque angular design. The chassis is nearly identical to that on the ridiculous liquid-cooled Asus ROG GX700 Trusted reviewed a couple of months ago.

But is the G752VT worth the £1200 asking price? Perhaps, but only if you need a gaming laptop right now. 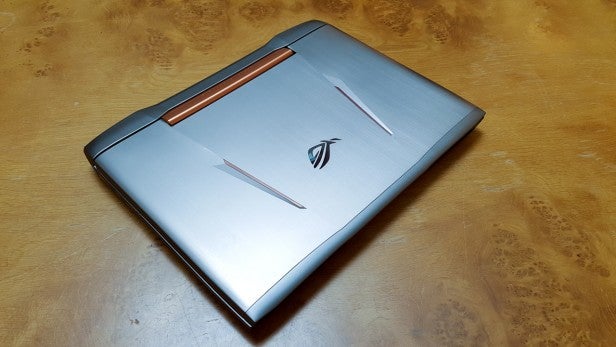 Built like a tank, the G752 is a behemoth of a gaming notebook. It tips the scales at 4kg (8.8lbs) – it really is bloody heavy. You’ll get more than a few looks if you whip (read: heave) this out of your backpack at Starbucks.

Compared to a desktop PC, you could call the G752 portable. But it’s almost twice as heavy as the competing Gigabyte P35V5 notebook (2.3kg), and that makes a big difference if you intend to carry it around all day.

It’s long, too – the back of the chassis has been extended to accommodate its cooling system, which means the G752 is bigger than the average 17.3-inch notebook. 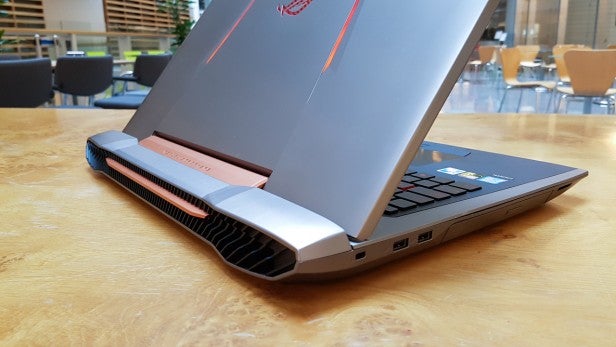 In terms of style, I think the exterior looks great. The aggressively sharp exhaust vents contrast well with the premium copper-coloured aluminium body. Opening it up, however, I was left feeling a little underwhelmed. The thick plastic bezels, rubberised palm rest and huge trackpad buttons make the G752 look just a little less premium than I’d like.

As for build quality, the G752’s weight makes it feel reassuringly strong and rigid. However, there’s a noticeable amount of flex if you press firmly toward the back of the keyboard, and the screen is prone to wobbling if you accidentally nudge the desk.

As for connectivity, the G752 has everything you could need. The right side features a 3.5mm headphone and microphone jack, USB 3.1 Type C, two USB 3.0 ports, a mini DisplayPort, an HDMI port, and a gigabit Ethernet connector. On the left is a Kensington lock, two USB 3.0, a Blu-ray drive and an SD card reader.

While the Blu-ray drive and Ethernet port are nice features that many thin and light notebooks have to do without, for me the G752 is simply far too big and bulky. 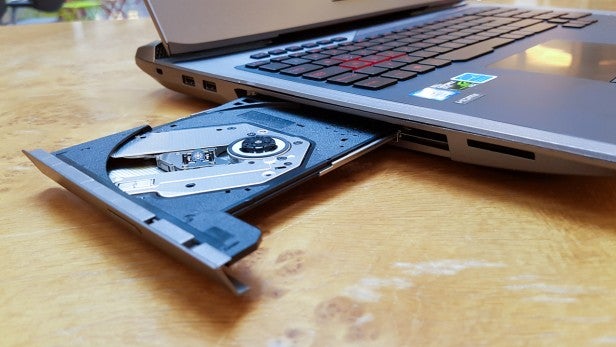 The G752 has plenty of room for a full-size keyboard and numberpad. The chiclet-style keys are well spaced, have a good amount of travel and are generally comfortable to type with. However, the rubbery plastic material used on the keys makes them feel and sound spongey, which makes it harder to touch type.

If you’re using the notebook at night, the red-backlit keyboard will come in handy. Using the pre-installed ROG Gaming Center, you can customise whether just the left-hand portion of the keyboard is lit up, or the whole thing.

The combination of spongey keys and a slightly unnerving amount of flex in the G752’s plastic body makes it feel far less premium than a £1,400 notebook should. 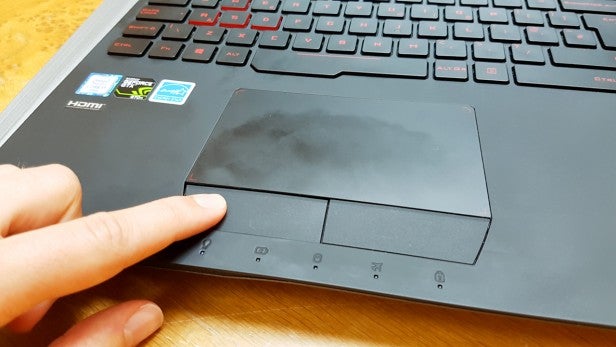 The trackpad, on the other hand, is a joy to use. It’s big and surprisingly responsive for a Windows laptop – particularly a gaming one.

The only problem I have is with the physical left- and right-click buttons beneath it; I’m not a fan of such a soft and long clicks. They feel like business laptops from a few years ago, and I don’t really think they suit a gaming machine.

The G752 comes with various storage options, but all models include a primary solid-state drive and secondary hard-disk drive. The model I had for review included a 128GB SSD and 1TB HDD.

This storage solution works well, with Windows 10 installed on the fast SSD, which means the laptop feels fast to use – quick to boot and nippy at opening files and launching programmes. The larger hard drive can then be used to store bigger files and games.

SSD performance is impressive, scoring 1,861MB/s read and 130MB/s write speeds in the AS SSD benchmark. The high read speeds are higher due to the SSD using the faster NVMe interface.

The G752’s 17.3-inch display is one of the best I’ve ever used on a laptop, let alone a gaming one. The IPS panel provides good colour reproduction, above-average 306nits brightness and solid viewing angles, as well as sticking to a sensible 1080p resolution. It also supports NVIDIA G-Sync and a high 75Hz refresh rate.

Few monitors, let alone notebook displays, include NVIDIA’s G-Sync technology, which reduces screen tearing and stuttering in games. It’s great to see ASUS has included it on the G752. 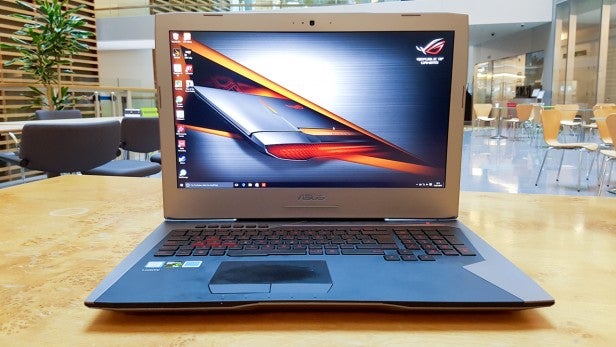 More noticeably, the higher-than-average 75Hz refresh rate makes everything from navigating the desktop, to scrolling through web pages and playing games feel slicker and smoother. The extra 15Hz over a typical 60Hz display doesn’t sound like a lot – and it certainly doesn’t feel as fast as more common 120Hz desktop monitors – but it still offers a noticeable bump in smoothness.

You may be concerned by the G752 only offering a 1080p resolution rather than a 1440p or 4K option. However, the lower res is ideal for a gaming notebook, as it allows the mobile-class  GPU (more on that on page 2) to reach higher frame rates in games, and take advantage of that higher refresh rate.

Achieving 86% of the sRGB colour space, the G752 falls in line with most other gaming notebooks. The IPS display is significantly better and more accurate than TN panels, but falls short of being good enough to use by photo and video editors, and the lower-than-average 886:1 contrast ratio means the G752 doesn’t quite achieve those inky blacks and brilliant whites.

Without doubt the display is one of the G752’s standout features, and it puts the screens on comparably priced gaming notebooks to shame.

Used as our main laptop for the review period
Tested for at least a week
Used consistent benchmarks for fair comparisons with other laptops
Reviewed using respected industry benchmarks and real world use
Next
Performance, Battery and Verdict Review