At the heart of the G751JL is a Nvidia GeForce GTX 965M graphics card. This is a mid-range unit with 2GB of GDDR5 memory, 1,024 stream processors and a 944MHz core. It performs fine for the 1080p resolution it’s working with, although more powerful options will push performance figures from the 30-40fps we recorded to a solid 60fps and more.

In our Unigine Heaven benchmark, run at basic settings and at a 1080p resolution, the G751JL managed an average of 45.3fps, while in 3DMark Fire Strike it scored 4,901 points. For comparison, the GTX 960M-equipped MSI GE62 2QD Apache scored 900 points less and managed only 23fps in Unigine.

The Asus’ results translated to reasonable real-world scores. The G751JL played BioShock Infinite at a 30fps average at Ultra settings once we’d turned off its Depth of Field options, and it handled Battlefield 4 at a smooth 40fps with Medium settings loaded. It struggled only in Crysis 3, where it achieved 25fps at Low settings. 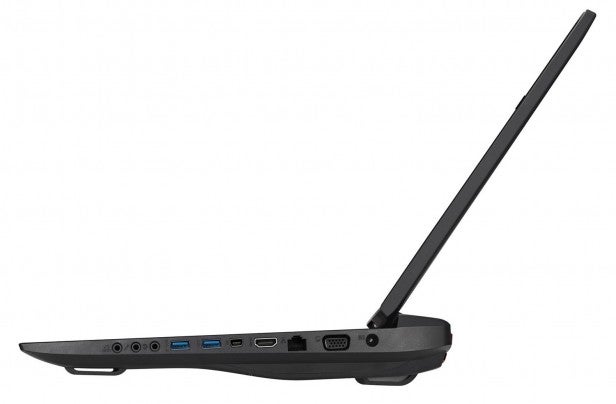 There’s enough power to handle almost every modern game, with only a little compromise. For greater gaming performance and a slight drop in application performance you can opt for the G751JT, which has the Nvidia GeForce GTX 970M. Or, you can go all out and opt for the G751JY, which features a GTX 980M. For comparison, the Alienware 17 comes with a GTX 970M as standard for £1,350 (although it lacks an SSD boot drive).

The Nvidia GPU is supported by the excellent Core i7-4720HQ processor, which has four cores, a 2.6GHz clock speed and Hyper-Threading. It’s also accompanied by a whopping 12GB of DDR3 memory. All this combined for a Geekbench score of 13,100.

The 120GB SanDisk SSD used for the G751JL’s boot drive isn’t the fastest by any stretch, but it’s still a decent upgrade from a hard drive. Its sequential read speed of 472MB/sec is well up there, but it’s the write pace of 265MB/s that is nearly half that of the fastest drives around.

The combination of generous size and relatively modest components resulted in the Asus delivering excellent thermal performance. The processor topped out at 85 degrees, while the graphics core remained at a balmy 69 degrees. The keyboard and trackpad both felt cool to the touch during stress-tests as well, with heat ejected from vents around the back.

Noise was consistent but modest – it’s one of the quietest gaming laptops we’ve tested, emitting less noise than many generic consumer machines. Thinner rivals will be hotter and louder when gaming or running other intensive tasks. 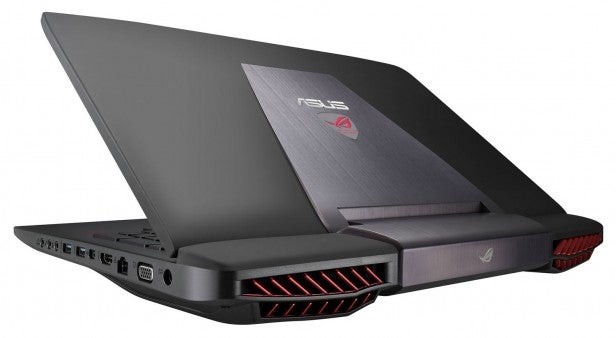 This Asus’ specification and eight-cell power pack didn’t provide any shocks in our battery life benchmark.

With the screen dimmed to 40% brightness and our standard battery test loaded, the G751JL ran for 4 hrs and 4 mins. That’s pretty average for a hefty gaming machine; we’d have hoped for a little more considering the modest hardware in this configuration and the laptop’s generous proportions.

Thirty minutes of charge saw the Asus regain 37% of its battery, which is only good enough for 1 hr 30 mins of low-intensity activity. No matter how much charge is available, though, don’t expect to do much gaming away from the mains – you’ll get two hours at most.

Used as our main laptop for the review period
Tested for at least a week
Used consistent benchmarks for fair comparisons with other laptops
Reviewed using respected industry benchmarks and real world use
Previous
Asus G751JL Review Next
Keyboard, Trackpad, Configuration Options and Verdict Review