The new Asus G751JL is a curious gaming
portable. On the outside it’s all bluster, with a body styled on the
F-22 Raptor fighter jet and a 17.3in screen that looms over rivals.

On
the inside it’s more considered, however, with a mid-range graphics
chipset, a single SSD and a reasonable screen resolution. This means it
costs just £1,258, making it extremely competitive despite the
loud, divisive design.

Other configurations
of the same chassis are available too, with the G751JT and G751JY adding
higher-end features and cranking up the price.

The
G751JL is one of the most striking gaming laptop chassis we’ve seen
recently, sporting an angular design and a back end that features a thick ventilation grille. The design is a tweak of previous Republic of Gamers models, but with
refinements visible in every area.

SEE ALSO: Our Pick of the Best Gaming Laptops 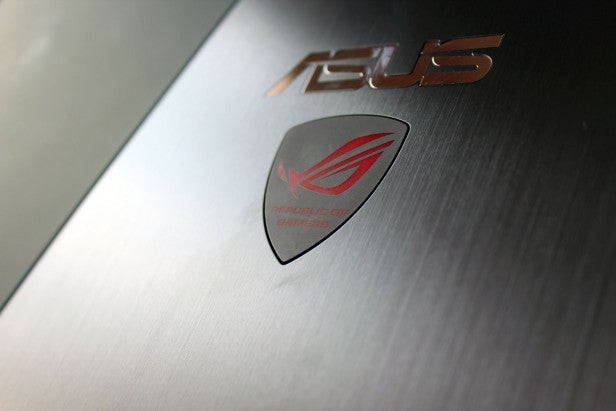 The Republic of Gamers logo is
now illuminated, sitting in the middle of a band of aluminium, and
another red logo sits on the wrist-rest too. The keyboard has also replaced the white backlight of old for a more dramatic red glowing from
beneath the keys.

The brushed-metal accents sit among areas
of smart-looking matte plastic, and the red-and-black theme continues
throughout. It’s undoubtedly a gaming laptop, and its looks fall somewhere between
the cheaper, plasticky MSI GE62 2QD Apache and the loud, lit-up Alienware 15.

It’s not all looks, though: the
Asus backs up its visual flair with practicality throughout. The
keyboard is designed to have more travel than most Scrabble-tile units,
and it benefits from extra buttons: three for macros, one to open
Steam and another to begin recording – a neat feature for Twitch
and YouTube streamers.

The trackpad is huge, there’s a Blu-ray
drive (a boon for such a modestly priced gaming machine), and the edges
of the G751JL are covered with ports: four USB 3 connectors, a trio of headphone
jacks, HDMI and Thunderbolt and an SD card slot. You also get
dual-band 802.11ac wireless and Gigabit Ethernet.

Access to the laptop’s interior is through the removable
of an L-shaped plastic panel. Below it you’ll find two
memory slots – with one free in this configuration – and two 2.5in hard drive caddies. Other machines provide access to more components, but there’s little else most users will want to upgrade, so this isn’t a big concern.

Build quality is impeccable, but as a result the G751JL is hefty. Its 17.3in screen sits in a footprint of 416 x 318mm – some 30mm deeper than the 17in MSI equivalent – and the rear of the machine is a whopping 43mm thick. That’s nearly 14mm thicker than the MSI and 9mm taller than the Alienware 17.

Both the Asus and Alienware machines are weighty at around 3.8kg, but the MSI takes the crown at 2.9kg, which is impressively light for a 17in machine.

The G751JL’s 1080p resolution might fall behind some laptops, but it’s a sensible option for a gaming machine: it ensures you can play at high frame rates at the native resolution for the best picture quality. Of course, the real reason you won’t come across 17in laptops with screen resolutions that are higher than this is because no-one makes the LCD panels – but the practicality point still stands.

The
Asus matches its sensible resolution with good quality. Its 353-nit
brightness level is considerably high and
it’s helped by a black point measured at 0.37 nits. Combined they make for a display that’s punchy yet is still able to display deep, dark colours without looking washed out. While the contrast ratio
of 954:1 isn’t class-leading, it’s well up there with the better displays.

Colour accuracy isn’t quite so impressive. The average Delta E of 5.3 is middling, but
the colour temperature of 6,490K is excellent. The upshot of this is that the overall tone of the display is spot on, but it isn’t quite as good as the best at showing the finest variations in colour.

The Asus does maintain its quality across
much of the display, though, with the screen’s brightness levels never deviating by
more than 10%; its already-excellent colour temperature deviated by a maximum of only 5%. If we were reviewing this as a standalone screen, we’d
be pleased. 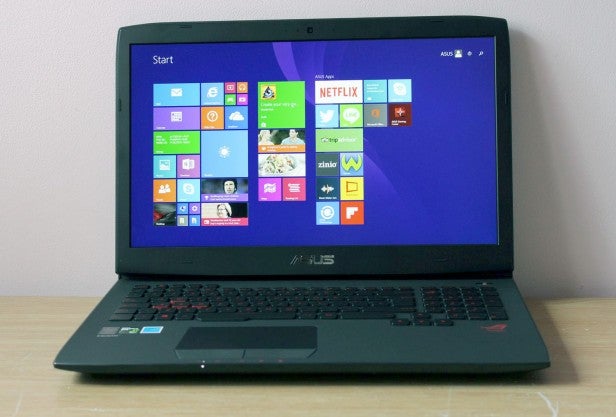 This is also one of the only laptop screens we’ve
seen to have different colour modes, although they’re largely useless.
The Theatre option adds an odd yellow tint, and the Vivid settings make
colours oversaturated.

We’re yet to test the direct rivals to this machine, but the likes of the MSI GE62 2QD Apache Pro do show that there are slightly better-quality screens available. Overall, though, the G751JL is a perfectly good option for all but those who make a living from editing images and video.

The two speakers and
single subwoofer make a big first impression. They offer enough
volume to fill a bedroom or living room, with the subwoofer churning out
good bass: drums have punch without becoming overwhelming, and deeper
tones are detailed and distinct.

Mid-range tones proved a little loud and tinny,
however, especially with the volume at maximum, and this resulted in higher tones becoming buried.

Nonetheless, the speakers are good enough for gaming, especially with the volume turned down slightly – although, as ever, we’d prefer to use headphones for longer sessions.