With its powerhouse specifications, it didn’t surprise us to find day-to-day usage of the G750JX a joy, once we’d got used to its substantial bulk at least. Programs load quickly, and performance is generally swift, although our model shipped without a solid state drive leaving boot up times a little on the disappointing side (45 seconds from cold and 51 from a restart). This can be upgraded in various ways, and does include the option for a hybrid drive with SSD storage space of up to 256GB.

Our standard benchmarks made for interesting reading. In PC Mark 7, it scored 3,909. A solid score, but a way behind our leaders: the Gigabyte U2442V gaming Ultrabook (5,066) and the Lenovo Carbon X1 Touch business laptop (5,056). It was however ahead of high end business laptops like the Toshiba Satellite P50t-A-10U (3,094) and HP Envy Touchsmart 15 (3,573). However, the score is a tad misleading as its largely down to the lack of an SSD, something PC Mark 7 places a high value on.

Geekbench 3, our cross-platform benchmark, shows the G750JX has all the performance it needs for games. Here the G750JX scored an impressive 11,797, putting it well ahead of the aforementioned U2442V (3,195) and second in our charts overall just behind the dauntingly powerful 27-inch 2013 iMac (14,462): impressive stuff. 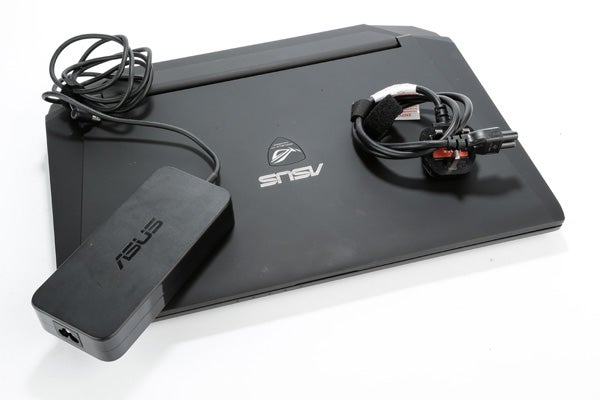 Gaming is where it really counts in a gaming laptop of course, and unsurprisingly we weren’t let down. Since we started using 3DMark, we’ve not seen it break the six-digits barrier in its scores, but we’ve seen it now. In the entry level Ice Storm tests, the G750JX managed a whopping score of 107,738, and barely lowered when moving into the Ice Storm Extreme version, clocking 89,413.  Suffice it to say both of these were unmatched in our previous benchmarks, with our previous winner on the low-end tests, the Toshiba Satellite C55-A-12U managing less than half (45,485 in Ice Storm and 29,177 in the Extreme variant.)

The impressive results continued into the Cloudgate tests, where the machine racked up 14,779 – this sounds like a big drop off, but considering our previous best was 7,078 (HP Envy Touchsmart), that’s not to be sneezed at. We were so impressed that we put 3DMark on the previously untouched Firestorm setting, aimed at high-end gaming PCs. Here, finally, it began to struggle, clocking up just 3,133. As mentioned, we have nothing to compare that to at the moment, but it’ll be useful the next time a gaming laptop shows up.

Finally, in order to compare it to the 27-inch iMac, we ran the Unigine Heaven benchmark, where it racked up framerates of 29fps in the basic test and 17.3fps in the extreme one. While these are slower than the iMac (which clocked 27.8 in the extreme test) these are still impressive scores in a laptop, and should impress most gamers given the complexity of the test (as mentioned in the iMac review it contains some really intense detail with 8x anti-aliasing, maximum level of tessellation and volumetric shadows.)

So how did it cope in the real world, outside of benchmarks? We loaded up Crysis 2 to put it through its paces. It ran beautifully smoothly at 1,920 x 1,080 resolution with Ultra detail. Tellingly, if you pull out the charger while playing, the framerate plummets and the game becomes a slideshow, so there’s clearly a lot of GPU efficiency saving when on battery. 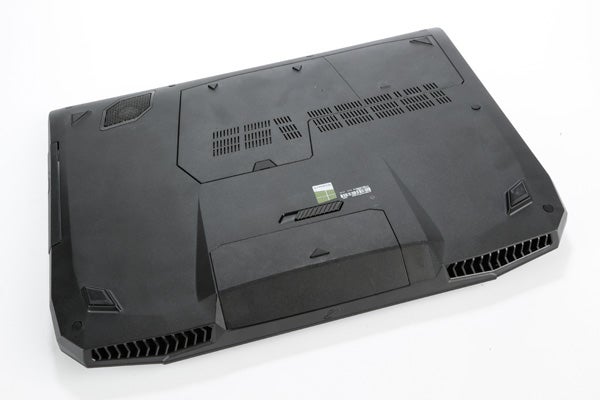 In day-to-day use, the G750JX is impressively quiet. You can definitely hear the fans, but its a consistent low hum, rather than the jet-engine that some laptops provide. The 17.3-inch frame does a good job of dissipating the heat as well, and it’s pretty much cold to the touch in web browsing and word processing.

Even when under heavy strain in our gaming tests, the fan made barely any more noise – and even if it were to, in gaming conditions it would most likely me drowned out by in-game sound anyway. The temperature was equally consistent. Colour us impressed. 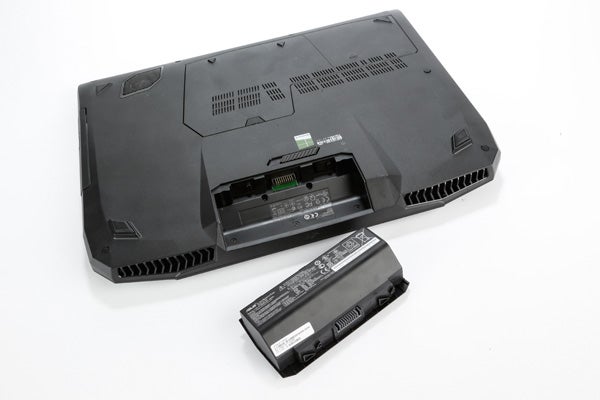 We weren’t quite sure what to expect from the G750JX’s battery: on one hand it’s a high-end gaming laptop, with a massive screen so likely to be power hungry, but on the other, there’s plenty of bulk for a heavy battery.

In the end, the specifications won out. In our standard battery test at 40% screen brightness, running through video, word processing and web browsing tasks, the machine gave us three hours and 20 minutes usage before needing to be plugged in. Okay, but nothing spectacular.

From a 30-minute charge, the battery regained 26% of its capacity. Again, pretty standard, and well below the best we’ve seen (take a bow Lenovo: the Thinkpad Carbon X1 Touch manages 77%), and equates to around 52 minutes of real world usage.

Of course, given the weight of the machine, it’s unlikely you’ll be away from a plug for too long in any case, so this shouldn’t be an issue for most users.

Used as our main laptop for the review period
Tested for at least a week
Used consistent benchmarks for fair comparisons with other laptops
Reviewed using respected industry benchmarks and real world use
Previous
Asus G750JX Review Next
Keyboard, Touchpad and Verdict Review