Asus is a brand that is becoming increasingly well established in the UK. Like its competitors such as MSI, it has branched out into areas such as notebooks with great success. This isn’t really that surprising as Asus has been an OEM manufacturer for many company’s notebooks for many years.


In the past few months I’ve looked at a couple of other notebooks in the Asus range, such as the W3J and earlier the ultra-portable W5F. The F3JP is a larger affair, but to compensate it’s also more powerful, packing Intel’s very latest chip, the mobile version of Core 2 Duo. It also features slightly beefier graphics that the W3J with an ATI X1700 rather than X1600 and Asus actually bills it as a gaming notebook. Whether this is true we’ll find out. 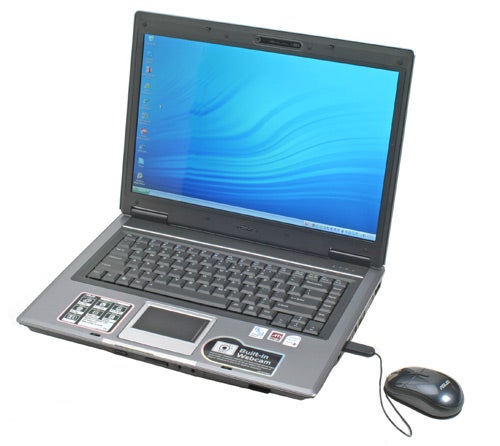 The trackpad buttons looks as though it’s only got a single mouse button – Mac stylee but in fact it is actually two – just press each side for left and right. An area on the far right of the trackpad indicates it can be used for scrolling, while below this is cool looking area of lights contained in a small silver strip. These indicate system status – such as charge and wireless on or off.


It’s undeniably a smart looking machine, with a smooth grey/silver finish inside and out and an embossed grid pattern towards the bottom of the lid. Opening up the machine you’ll need to press in a rather clunky central button, which is rather stiff – no fancy pants magnetic closing here. The speakers are located at the top under a grille, with four lights embedded, indicating power, hard disc activity and Scroll and Num lock status. Beneath this is a silver line and on the right hand side this is broken up into six buttons. Five of these are shortcut buttons, while the one of the far right is the power switch. The one on the far left launches what looks at first like a proprietary Asus 10ft interface, aka Windows Media Center. However, choose the video option and all you get is standard Windows Media Player launching – choose Pictures and you get the Windows Picture and Fax Viewer. This is officially stupid. There’s also one button to disable to the Trackpad – fair enough – and another to turn it on again. Surely one button to do both would suffice? 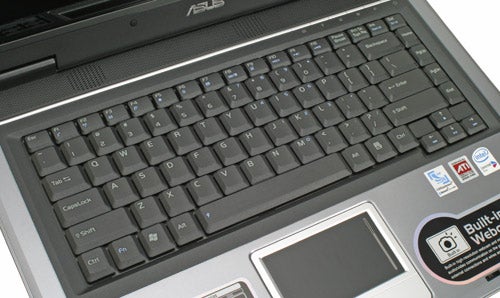 The screen is a large 15.4in across and has a widescreen resolution of 1,280 x 800. This is ok – enough for regular HD video, but a higher resolution would be welcome on a display of this size. It’s one of those high gloss screens which are designed to boost colour and contrast and it does just that. However, this example proved to be very susceptible to reflections and I had to lift the lid up and down to avoid the overhead lights in the office. It also has a poor viewing angle both vertically and horizontally. If you’re sitting and watching too close to the notebook you’ll be fine but too far back and to the sides and it will be a problem.

The display has a rather large bezel and the top and bottom but there is the 1.3 megapixel, 640 x 480 webcam that’s located at the top. This is a feature that I always like to see, as it enables you to stay in touch without having to worry about any external cameras and trailing wires. A microphone is located next to this and a small yellow light illuminates when the camera is active.


While the screen itself is only ok, I like the keyboard immediately. Having a larger laptop might mean more weight but the added size makes for less cramped keys. They’re well spaced out but the individual keys themselves could be larger and there are gaps between them and it is possible to catch the edge of a key as you type.

At the front of the machine, you’ll find a sliding switch to activate the wireless and next to this are microphone and headphone sockets. On the right hand side is a card reader handling SD, xD, MMC and Memory Stick. On the left hand side you’ll find a Super-Multi DVD Writer. This will read and burn almost every type of disc around right now, though not HD DVD or Blu-ray discs. It is Lightscribe compatible so you can burn your own images onto your discs. The only other thing also on that side is a Kensington lock.


On the left hand side you’ll find an Express card slot. This gives you some future proofing but doesn’t actually provide you with ‘present-proofing’ – you won’t be able to make use of any of the current 3G data cards. The connectivity continues with two USB ports and a mini-FireWire port. There are no less than three video outs next to each other, S-Video, DVI and VGA, which is great to see. DVI on a notebook is all too uncommon and means that you don’t have to compromise on quality when you hook up to an external monitor or display. In the back right corner you’ll find the modem and Gigabit Ethernet port.

Round the back, you’ll find the power socket at the rear right and another two USB ports. The battery pack is next to this and Asus has supplied a 9-cell 7,200mAh pack that sticks out at the back.


The Asus is equipped with both Wi-Fi and Bluetooth and these can be managed from a cute little application that sits in the start tray mimics Mac OS by bounding up and down as you make your selections. The later meets the 2.0 EDR standard, increasing bandwidth and range.


The F3J is available in a number of configurations and the one I have here for review has a P suffix. This is the fastest version and my review sample has an Intel Core 2 Duo T7400 inside it. However, I couldn’t find this offered anywhere – only a 2.0GHz T7200. Equally, the hard disc inside this is a 100GB, while one I found had the slower CPU but a larger hard disk. There was also 2GB of RAM fitted to this system, whereas only 1GB is supplied as standard – though you can up it to 2GB for around £100. The graphics chip internally is the ATI Radeon X1700. Thanks to Hyper Memory it can have up to 512MB of RAM, by intelligently stealing from system RAM.

To test performance we decided that it would be good to compare to the Asus W3J, which was one of the first notebooks we reviewed to feature an Intel Core Duo processor. The results clearly show the benefits of the newer Core 2 Duo CPU. The SYSmark scores are all healthily up and the same goes for the PC Mark scores. The only one of these that didn’t increase significantly was the graphics score. This is echoed by the 3DMark 06 scores, with only a minor increase.

We don’t have comparable 3D Spode Mark scores for the previous Asus but the tests we ran this time show what sort of performance you’ll get from this as a gaming machine. Gaming performance is not stellar. In demanding titles such as Call of Duty and Prey, you won’t be able to enable anti-aliasing or anisotropic filtering if you wish to maintain smooth, playable frame rates. With other less demanding titles you’ll be able to get away with it.


The Asus F3JP is a decent notebook in many respects. The most impressive aspect though is its raw performance, thanks to the fast CPU. The excellent keyboard is a boon too. However, the screen and the graphics are only reasonable. With a higher resolution and great graphics performance to match, this system would be ideal.


Included in the box is a small travel mouse that’s not too bad to use but the only software included of note is Norton Internet Security, which I don’t particularly like. 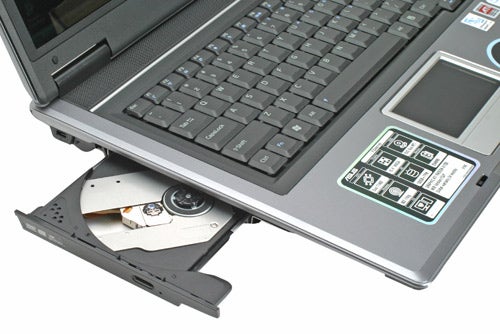 In terms of battery life we had problems getting our usual MobileMark 2005 to complete, though we did obtain a DVD playback test – the F3JP outclassed the W3J by some way, but it is using a larger 9-cell battery. At 2.95Kg though, this isn’t a machine I’d want to move around too much. In fact, it essentially would be best as a desktop replacement. Over prolonged use in Windows, the fan didn’t spin up and it only got wildly warm, which demonstrated the efficiency of the Core 2 Duo.


If you’re looking for a notebook with a large screen and plenty of raw performance at an affordable price then this will fit the bill. However, the display resolution is not the highest, the screen quality is only OK and the graphics performance can only be described as adequate for current games.