There’s no denying that the whole world is going dual. Most top-of-the-line brand new PCs will sport dual-core CPUs this year and if you’re really serious about gaming, two graphics cards are a must. The main problem with two graphics cards however is noise. The boys in green and red are having a hard time keeping the fan noise on their single cards down to an acceptable level, let alone two. As anyone who has two graphics cards in their system will tell you – fast they may be but quiet they ‘ain’t’.


Noise then, is one of the benefits of this quite simply gargantuan card from Asus. It’s quite massive, measuring 245 x 130mm, so you’d better be sure you can fit it into your case before considering it. It’s this large because of the large heatsink and fan and extra power requirements from the two 7800 GT GPUs that Asus had mounted onto the PCB. Of course it’s not a new idea. 3Dfx did it ‘Back-in-the-day’ in 2001 with its ill-fated Voodoo 5 5500 sporting dual VSA-100 chips, ATI flirted with it with its Rage Fury Maxx and recently Gigabyte reinvigorated the genre with its 3D1, which featured two GeForce 6600GTs. 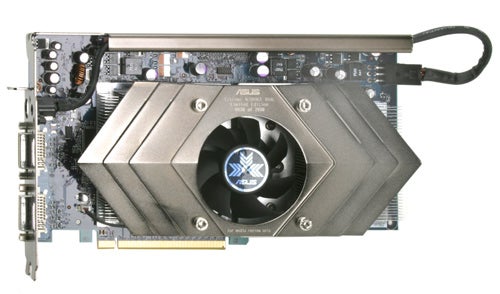 With two 7800GTs the Asus is a much more attractive proposition, though you can’t help but wish it was two 7800 GTX cards instead. It’s likely though that the power requirements for those two cards were simply too much for one board, at least on the current generation micron process.


The other frustration is that you can’t (officially) put two together to form a quad SLI system. However, the reason it doesn’t work is because nVidia want it that way and its drivers prevent two of these cards working together. There are reports that using the driver supplied by Asus on the CD, quad SLI will work, but as we don’t have two of them we can’t confirm this for ourselves. However, even where it has been made to work, BSODs, on screen image corruption, and i some cases poorer performance than just one Dual card have been reported, so it’s clear that without offical support from nVidia the quad-SLI that nVidia is custom making for Dell is the only way you’ll get your usable four GPU loving.


The Asus is also guaranteed to work in a rather limited number of motherboards, which are listed on the Asus web site. Nine of these are Asus, there’s one DFI and one Gigabyte, so the list is hardly exhaustive if you didn’t want to go with Asus.

The card itself is a very impressive beast to behold. The angular heatsink gives it the look of a shield of armour and it’s well built too. A metal plate runs alongside the top of the PCB that some standard cards have too. This helps to keeps the card secure in the case but it also serves to hold the power cable than runs from the plug at one end to the external power connector on the rear bracket. Yes, you read that right – external power. With two 7800GTs on hand, Asus provides an 80 Watt external power brick so that you can use this card, in case your own PSU isn’t up to the job.


Specs wise the GPUs offer a bit more than the norm. Each one is clocked at 430MHz; that’s 30MHz more than the standard reference cards. Now other manufacturers have also clocked their 7800 GTs to 430MHz, but what’s harder is clocking the memory, which makes more of a difference to performance when pushing things at very high resolutions. 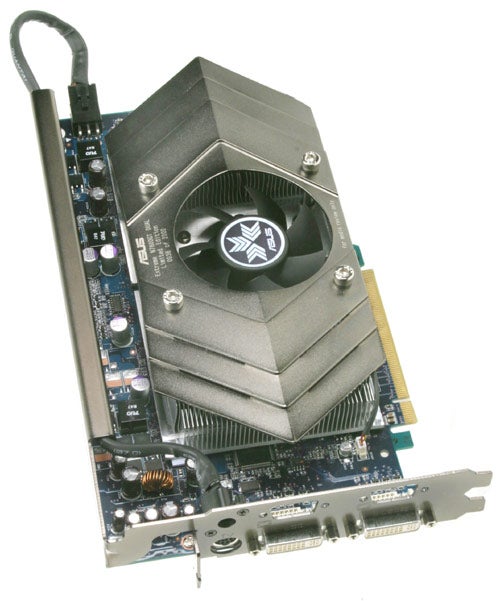 
What cooler though is that thanks to the serious heatsink, fan and external power that the Asus Dual card has further headroom for some overclocking. In fact, I managed to take it up to 480MHz on the GPU and an amazing 1,300MHz effective on the memory. I didn’t run an exhaustive amount of benchmarks at these figures but I did run quite several, and there were no locks-up or artefacts to report.


Remembering that this card will run quieter than any other dual card combination out there and there starts to be some sense to what on the face of it seems sheer techno-madness.

Let’s look at the scores. For comparison we have a set of reference 7800GT cards, clocked at 400/1000 in the same system set up, consisting of an AMD Athlon FX-57 CPU, (2.6GHz), 2GB of RAM, on an A8N32-SLI Deluxe with dual x16 PCI Express graphics slots. Obviously, only one of these was employed and the card had to go in the lower slot, away from the CPU, for it to work. This is labelled as Slot 2, but is actually the primary PCI Express graphics slot.


In Far Cry and Doom 3 however, it doesn’t quite go the same way and at stock speed the Dual card actually comes out slower than the reference cards. Where it takes it back is with the overclock, acheiving higher scores in those tests. In Doom 3 at 1,600 x 1,200 it bests its original score by nearly 12 frames per second – a significant boost. 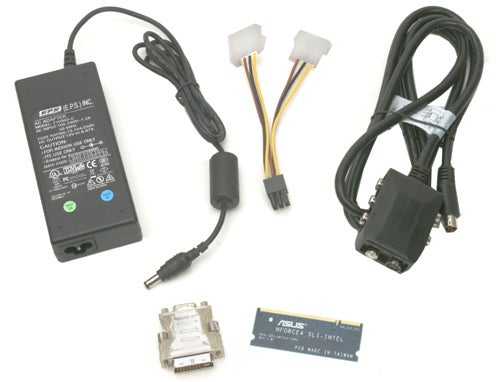 In Half-Life 2 and Day of Defeat with HDR it’s again slightly behind but again the overclocking results pull it ahead, though not by so great a margin as in the other titles.


So while the Asus Extreme N7800GT Dual is an achievement technologically, it’s slightly disappointing performance wise – unless you overclock it. However, with its ability to do this above and beyond single cards, you’d be mad not to.


Even though you can’t use two of them in combination, the Asus Extreme N7800GT Dual would be worth considering if you want to go SLI without the hassle, or the noise, of two cards. The performance is there if you overclock and it is quieter, which always helps you enjoy your games more. The problem is then that at the cheapest price we could find it, it was still more expensive than buying two of the cheapest 7800 GT cards.


Ultimately, the reason to buy this card is not for the performance or even for the near silent running – it’s for the satisfaction of owning a truly interesting piece of graphics engineering, and for that you’ll always pay over the odds. Asus knows that and that’s why it’s only making 2,000 with each one specially numbered. (Our one was number 38).


The Asus Extreme N7800GT Dual is a truly over the top piece of engineering. It makes little sense financially, and it only outperforms two regular 7800 GT cards if you overclock it, but by offering a quieter SLI life and the chance to own a limited edition, the Extreme N7800GT Dual will have its admirers and find its niche.