The normal course of events for the release of a new range of graphics cards runs something like this:


When the company involved has a new technology, it releases a flagship product based on it for some exorbitant price, then sits pretty on the profits for a while. After a few weeks, or months, the company will release cheaper, slower products to fill out the new range and thus phase out the entire older range. Then, after six months or so, a refresh range based on the same products, but with a few tweaks here and there, will be released to tie the company over for another few months until the completely new product range is ready. This whole cycle generally lasts about a year.


It’s a tried and tested routine that is almost universally adhered to. Obviously things don’t always go so smoothly and for one reason or another a company may find its products fall behind the competition so it has to spend the year either sandbagging until the release of its new products in a year’s time, or it will push through the new products it’s been working on quicker than usual. Alternatively, you get the complete opposite and one company is so far ahead it rests on its laurels waiting for the competition to catch up, blissfully soaking up money from their inflated prices along the way.

Well, not to put too fine a point on it, this is exactly what nVidia has been doing since the release of its 8800 GTX, way back in November 2006. When that card arrived it completely blew the competition out of the water and it has pretty much reigned supreme ever since. Ok, a few months later the 8800 Ultra actually stole the performance crown but this was essentially just a factory overclocked 8800 GTX anyway.


When nVidia did finally have a new (well, renewed at least) architecture, in the shape of the G92 chip that powers the 8800 GT and 8800 GT (512), they chose to brand these products as 8000-series rather than do the logical thing and move onto the 9000-series. The reason for this was because nVidia didn’t want to hurt sales of its more expensive flagship products (the 8800 GTX and 8800 Ultra). This is why, when the 9000-series did finally arrive, it was in the shape of the mid-range 9600 GT, rather than a flagship product.


This preamble brings us to the recent launch of the 9800 GTX, the new flagship single card in nVidia’s lineup and the long awaited replacement for the 8800 GTX. So without further ado, let’s find out if it’s the rightful heir to the 8800 GTX’s throne or whether it’s just another pretender.

Given the introduction you probably won’t be surprised to hear that indeed the 9800 GTX is just another confused result of nVidia’s recent numbering system because under its bonnet this card is essentially just an overclocked 8800 GTS 512, sporting as it does, the same 128 stream processors, 512MB of memory, 256-bit memory interface, texture addressing and sampling stats, and video processing capabilities. It is the 8800 GTS 512 OC (Overclocked Edition) in all but name.

In fact, with a core clock speed of 675MHz, a 1,688MHz shader clock and memory running at 1,100MHz (effectively 2,200MHz), the overall pixel fillrate is actually lower than the 8800 GTX, resulting in lower performance at high resolutions or when anti-aliasing is enabled. Also, there’s less memory and less memory bandwidth so again, higher resolutions and anti-aliasing levels will really tax this card. It does have a greater overall shader throughput, as a result of the faster shader clock, so with more and more games putting more demand on shaders this should keep it ahead when at the highest in-game detail settings. However, it’s only a small increase and considering how long the 8800 GTX has been around we would normally expect a larger leap. In the end, we can’t help but feel a little disappointed with the likely performance of the 9800 GTX.


That said, there are a few new features that have been brought to the table. The first is support for three-card SLI, or tri-SLI, a feature that has previously only been available with the 8800 GTX and 8800 Ultra. There’s also support for HybridPower, which lets you switch between using the low power onboard graphics of a motherboard, for when you’re not gaming, and a power hungry discrete graphics card for when you need the 3D processing power. This feature is only available with certain nVidia compatible chipsets, namely the 790a, a sample of which Leo recently reviewed, along with an as-yet unnamed chipset that will support Intel CPUs. 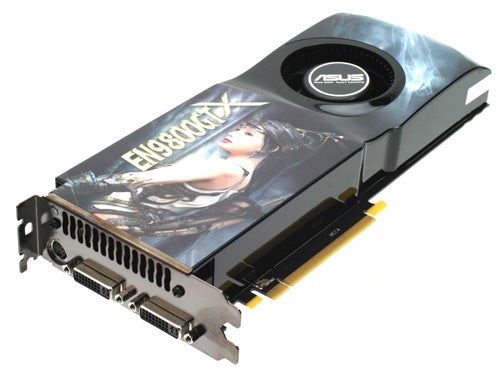 So, on balance, there’s plenty going for this card in terms of internal features so it’s good to see it’s the same story when you look at the physical features of the card as well. At 270 x 37 x 100mm it is longer than your average ATX motherboard and takes up the width of two normal expansion cards. However, this is par for the course for a graphics card of this power.


The cooler is much the same design as that used on the original 8800 GTX with a large single fan sucking air in from the front of the card, blowing it across an array of heatsinks and heatpipes, and out the back through a grilled section that aligns with the second expansion card slot on your case. Also like the 8800 GTX, it is whisper quiet when the card is idling and although it gets noisier during gameplay it is a low whoosh rather than a high pitched squeal or buzz. Similarly, while the card did get understandably hot, the exhausting nature of the cooler means it shouldn’t require too much additional airflow in your case.

As the card is essentially an overclocked 8800 GTS 512, it requires more power than that card so, rather than one, it has two six-pin PCI Express power connectors along its top edge. The extra power this provides should also give more headroom for further overclocking of the card, if that’s your thing.


Also tucked away on the top edge of the card is a socket for an S/P-DIF digital audio connector. This can be used to tap into your computer’s sound card (or onboard audio) to pass an audio signal out the card’s DVI ports, along with the video signal. When a DVI-to-HDMI converter is then used this enables you to use a single HDMI cable to pass audio and video out from your computer to a TV or Home Cinema setup. It’s not as elegant a solution as AMD employs – its method doesn’t require an extra cable – but it does in fact provide more options, which is always a good thing.

Incidentally, the reference designed card has two dual-link DVI outputs that are both HDCP capable so you can use this card to connect to a TV or monitor (or indeed both) and watch protected Blu-ray discs. There’s also an analog video output that, when used with the included dongle, gives you component and composite video output.


So, all in all, despite its questionable origins, this is a card that in terms of features, has a lot going for it over and above its predecessor. All that remains to see is how it performs and where it fits in the current market based on price.


The specific card we were sent for review is the Asus EN9800GTXTOP, which comes with the core, shader and memory clocks pre-overclocked to 755MHz, 1840MHz, and 1175MHz, respectively. Aside from this – and an Asus sticker – the card is identical to the reference design, so our conclusions about this card can be applied to the 9800 GTX as a whole. For testing we used the included Asus overclocking tool to under-clock the card to standard speeds as well as running it at out-of-the-box speeds. 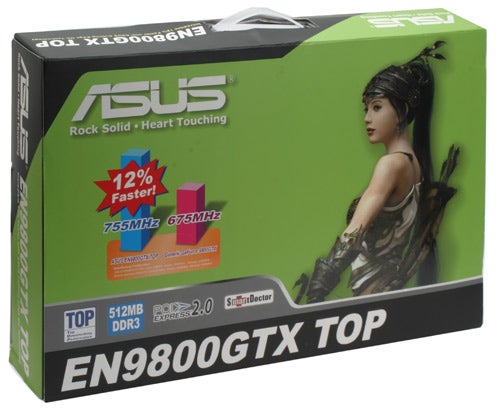 Asus doesn’t provide any free games with this card, which is a bit of a shame, but you do get a rather nice leather CD wallet and a couple of driver/utility and quick guide CDs to fill it with. A DVI-to-VGA converter, an S-Video to component dongle, and a dual molex to six-pin power converter are all included, so there’s enough to get you started. However, there’s no SLI connector and, considering the card has two digital outputs and the ability to pass-through audio, it would be nice to see a DVI-to-HDMI converter in there as well. Also, as the card requires two PCI Express power connectors, two dual-Molex converters for those of us with ageing power supplies would be handy. None of these issues would put us off buying this card but it’s worth noting.

We put the 9800 GTX through its paces using our usual selection of games and we’ve compared it against all the competitors at this price range. Each game is tested at a variety of resolutions and anti-aliasing settings and the tests are repeated three times to ensure an accurate figure is obtained. Once three stable figures have been achieved we average them out and report that number to you. 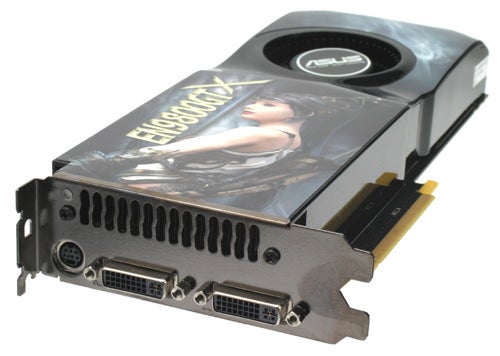 We’ve turned on transparency anti-aliasing (known as adaptive anti-aliasing in the ATI drivers) to smooth edges of semi-transparent textures, where appropriate, and kept all in-game settings at their maximum to ensure we are getting the best video quality possible. All except Crysis, that is, which we’ve run with everything set to High, as opposed to Very High, as the latter still produces largely unplayable framerates even on these high-end cards.


It’s clear to see from our results that the 9800 GTX performs very well and certainly competes for the title of fastest single graphics card (okay, technically the 9800 GX2 is a single card but it uses two GPUs). However, this is supposed to be the replacement for the 8800GTX and thus, one would assume, it’s should to be noticeably faster than that card, but this seldom seems to be the case. Other features like lower power consumption, better video processing, and Hybrid SLI, all help to set it apart from the older cards and, for anyone that hasn’t already plumped up the cash for an 8800GTS 512 or 8800 GTX, it isn’t a bad buy. However, if you were looking for something to replace your 18 month old 8800 GTX, you’d be sorely disappointed.


The 9800 GTX is undoubtedly a good card for anyone looking to upgrade from a mid-range card or a particularly old high-end card. However, if you already own any high-end graphics card from the last year there’s little reason to upgrade.