As a general rule of thumb when it comes to graphics cards you get more noise the faster the GPU is, as more speed means more heat. But noise isn’t a good thing, especially not in a home PC and it is a problem with many computers. Stock graphics card coolers tend to be quite cheap as the board manufacturers want to keep their cost down and the end users are the ones that end up suffering.


Sure, there are several third party coolers you can get these days from companies such as Zalman and Arctic Cooling. Some board manufacturers even pre-fit these to their high-end cards. Asus has gone down a different route with the EN7800GT Top Silent and designed its own heatpipe solution to produce a passively cooled 7800GT. 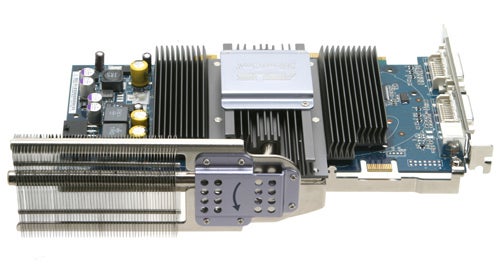 At first this sounds slightly mad, considering that nVidia has produced some rather large air coolers for these cards. But Asus has built on its experienced from previous cards – using its patented SilentCool technology – such as the Extreme N6600GT Silencer/HTD and the Extreme AX800 Silencer/2DTV. However, a 7800GT runs a lot hotter than a 6600GT or an X800, but Asus has solved this by using a bigger heatsink and a larger heatpipe with more fins.


Rather than going down the Zalman route – a design that a lot of other manufacturers have copied with varying results – and run the heatpipes from the GPU to the back of the graphics card, Asus has a much more interesting solution. Although it looks as if the heatpipe is located just above the card at first, this is not the case. What Asus has done is to create a solution that allows you move the heatpipe 45 degrees. 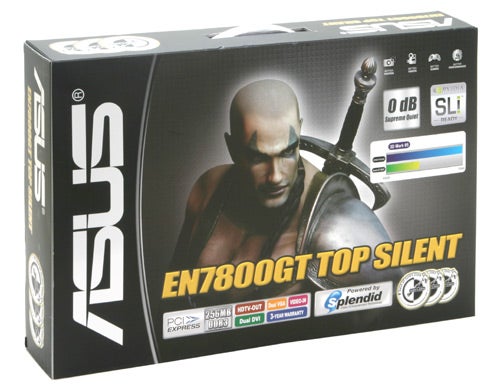 By doing this the heat is drawn further away from the graphics card, resulting in less heat reflection back onto the card. On top of this the CPU cooler along with any side mounted case fans will help to cool the heatpipe. The only downside to this is if you have an SLI setup as you could only use one of these cards if you plan to extend the heatpipe fully. I wouldn’t suggest using this card in a machine with poor cooling, as it will overheat unless you have at least a couple of good fans in the case. 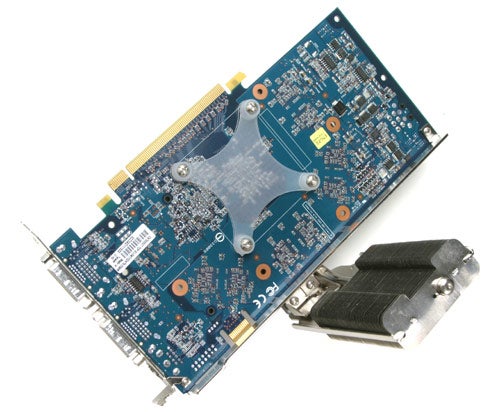 
The heatsink is held in place on the card with four spring loaded screws which are supported by a plastic rear bracket. This is five screws less than the standard cooler and I was expecting to find more due to the extra weight of the heatpipe. A metal bar has also been fitted to the top of the card to prevent it from warping due to the heat. 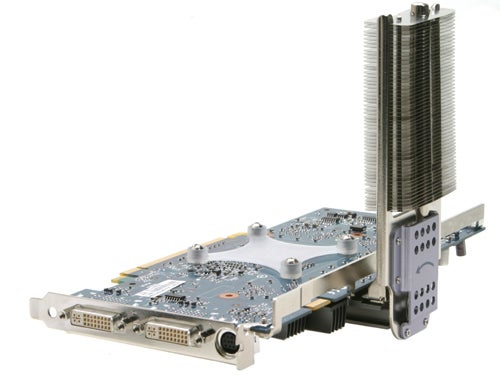 But enough about the cooling, let’s take a closer look at the card itself. The EN7800GT Top Silent doesn’t differ much from the reference design, but there are some component changes. The PCB is blue as with the Asus Extreme N7800 GT. The outputs consist of two DVI ports and a ViVo connector. A special cable is attached to the ViVo connector which adds component video, composite and S-Video out as well as composite and S-Video input.

More important to gamers are the clock speeds of the GPU and memory and you might have thought that Asus would run the EN7800GT Top Silent at no more than stock speeds. However, this is not the case – showing just how good the SilentCool technology really is the EN7800GT Top Silent is overclocked. The GPU is only modestly overclocked at 420MHz, but the memory – which coincidentally happens to be 1.6ns compared to 2.0ns on most 7800GT cards – is clocked at 1.24GHz, that’s 240MHz over stock speeds. 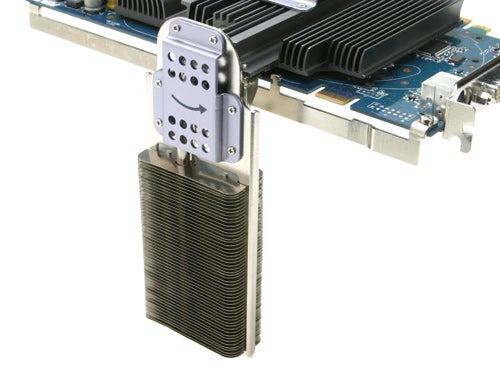 The software bundle is also quite impressive with a copy of King Kong – based on the new movie by Peter Jackson – two triple packs of some budget games, Asus DVD player, CyberLink PowerDirector 3DE and finally CyberLink Media@Show SE 2.0. You also get a fake leather case to keep all the discs in.


As you might already have guessed from the specifications the EN7800GT Top Silent this is a rather fast card. It might not compare to the GTX’s or the latest X1900 cards, but then again neither of those are passively cooled. 131.2fps in Doom 3 at 1,024 x 768 is in itself quite impressive but the EN7800GT Top Silent scores 107.78fps in Half Life 2 and 102.8fps in Far Cry at the same resolution. Asus has definitely managed to squeeze a lot of performance out of this card.


It’s only in F.E.A.R. that it doesn’t manage to break the 100fps barrier, but this is an extremely demanding game. Considering that the EN7800GT Top Silent was tested using an AMD FX-57 processor and 2GB of Corsair XMS Xpert PC3500 memory, you might not hit these numbers on your PC. I doubt most people would be disappointed with the performance of the EN7800GT Top Silent regardless of their computer. 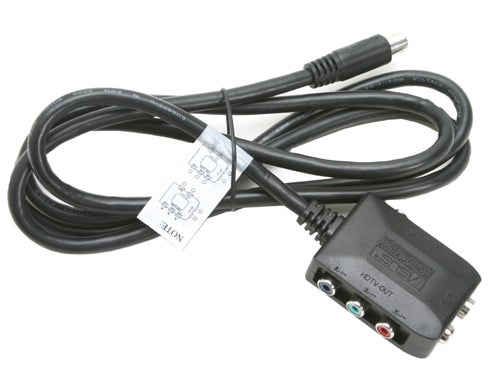 There’s really only one disappointing part and that is the price. The EN7800GT Top Silent costs £296.39 which is quite a steep premium to pay for silence. This makes it the second most expensive 7800GT card bar Asus’ own ASUS Extreme Dual N7800GT, but that one is using two GPUs. You can actually pick up a 256MB 7800GTX for about the same money. This card isn’t for everyone, but if you want to build a low noise gaming computer, this is the best compromise in terms of noise and performance.


The Asus EN7800GT Top Silent is a great graphics card for anoyone looking for good performance without the added noise that’s usually associated with it. There is a price premium to pay and as you can get a 7800GTX for the same money, which would offer more performance, but Asus is still likely to entice many buyers to this passively cooled card.