After the resounding success of its Eee PC netbook range, the latest of which is represented by the sleek Seashell models, Asus extended the Eee name across a range of products. While the company has netbooks down to a fine art at this stage though, its first attempt at an Eee All In One (AIO) desktop PC – the imaginatively-named Eee Top All In One PC – left us impressed compared to rivals at the time but still wanting more. Well, Asus has delivered big-time with its new EeeTop ET2203T, including highlights such as a far more attractive black-on-silver design, Full HD touch screen and Blu-ray drive. 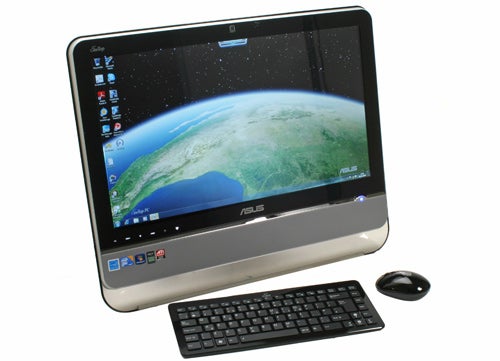 In fact its relatively high-end specifications puts the ET2203T into a whole different league to the Atom-based original Eee Top, and up against the likes of HP’s TouchSmart range. Obviously it needs the looks to match, and while it’s no iMac, this AIO does look classy. The main screen is a ‘frameless’ affair, with the display area transitioning seamlessly into its smart piano-black bezel. Unfortunately this does mean the screen features a very reflective layer, but it’s surprisingly finger-print and smudge resistant so you won’t need the included cleaning cloth too often.

At the machine’s top you get a discreetly-framed one-megapixel webcam, while the bottom left of the black bezel houses visually pleasing white-backlit touch controls. There’s volume and OSD, as well as a handy ‘home’ button that takes you to the Windows desktop plus indicators for HDD activity and wireless. The OSD is intuitive if a tad bland. Unusually for an AIO PC, you get full control over everything affecting the screen, from brightness and contrast to colour temperature and input selection.

Below the black bezel is a plastic silver speaker grille section, with a chromed strip pleasantly accenting the blue-backlit power button. The whole lot rests on the same transparent plastic outer bezel that adorned the original Eee Top, though unlike the original this model’s has a grey tint to it. The back of the machine, meanwhile, is unrelieved glossy black plastic, while the tilt-adjustable slide-out stand is constructed using brushed metal. Overall, build quality is excellent with not a hint of flex or creak anywhere to be found, which is a fairly impressive achievement.

The ET2203T’s good looks and sleek profile are matched by the included Eee wireless mouse and keyboard combo. Both devices sync easily with the Eee Top main unit and run on twin AAA batteries, meaning you can use rechargeable ones. The small, ambidextrous mouse is reasonably comfortable, with a defined click to its buttons and a soft-touch two-way scroll wheel offering notched feedback. 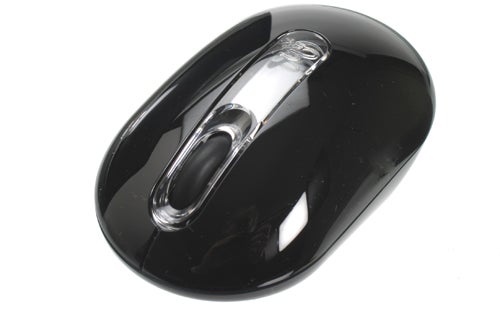 Reminiscent of the wireless model you get with the iMac, the low-profile isolation-style keyboard is attractive and tiny. Like its Apple equivalent it’s missing a number pad, which is sure to divide opinion. Its shallow matt keys contrast nicely with their glossy surround, layout is spot on and feedback is okay, though not up to the standards of a ‘normal’ desktop keyboard, and we wouldn’t recommend it for extended typing sessions. It’s a question of style over substance, but then that’s the case with the Eee Top overall and indeed with most AIO PCs.

The keyboard’s base houses a stylus in an innovative spring-loaded compartment, which lets you pop it out at the touch of a finger. This glossy black stylus can be used to write or draw on the PC’s 21.6in resistive touch screen, and though it’s not sculpted for comfort it’s pleasant enough to use. When our sample arrived the screen wasn’t properly calibrated to the stylus, but a quick session with the simple Touch Panel Tool software corrected this.

While we’re on the topic of the screen, it’s one of the more impressive efforts we’ve seen on a sub-£1000 AIO. Though obviously not in the same playing field as the 27in iMac’s beautiful LED-backlit, 2,560 x 1,440 resolution affair, Asus’ experience in the monitor field is clearly paying off here. The ET2203T’s 1,920 x 1,080 resolution is perfect for Full HD entertainment and gives you oodles of desktop real estate. 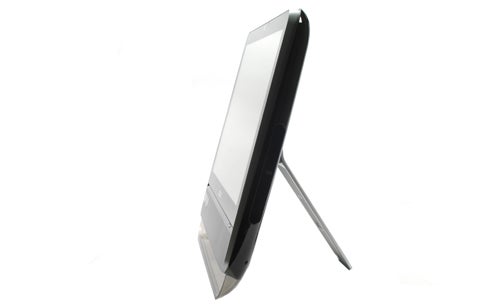 As mentioned before the display’s settings are adjustable, but unusually it’s configured (almost) ideally out of the box so you don’t have to change it from its defaults. Unfortunately the glossy layer over the top does throw up a lot of distracting reflections, but once you get past these there’s plenty to enjoy. Contrast is impressive for a TN-type panel, meaning you’ll actually get to see most of the detail in both light and dark parts of images.


Viewing angles are also above par and there’s no sign of backlight bleed, with backlighting being very even overall. Sharpness is likewise good so even the smallest fonts are clear. In fact our only real complaint with this screen is some banding across dark gradations, a problem that will rarely be a significant distraction.

Moving onto the touch implementation, as we’re dealing with resistive technology the screen’s surface gives slightly to the touch. Sensitivity is acceptable if not quite up to capacitive levels, and obviously multi-touch is not on the menu which is a pity considering Windows 7’s native multi-touch support. 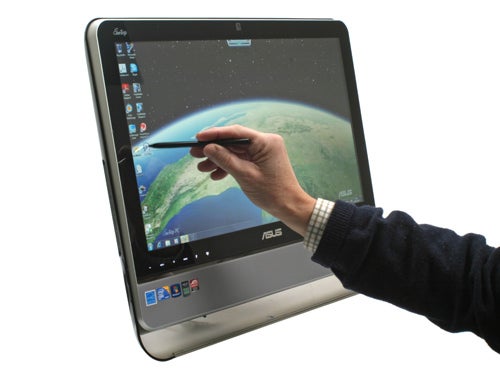 Touch on the ET2203T works well enough for general Windows operation and Asus has provided a number of applications to get even more out of it, though these show nowhere near the amount of polish or coolness of HP’s implementation on its TouchSmarts. The most useful ones include a touch-optimised photo viewer and a sticky-note app, in which you can use either your finger or the stylus to jot down notes. Naturally the stylus also lends itself well to casual drawing and photo editing, though as it lacks pressure sensitivity the experience will be limited no matter what software you use.


After the relatively impressive screen it’s nice to hear that the integrated sound system matches up and then some. The 3W SRS stereo speakers pump out surprisingly rich audio at more than audible volume levels without distortion. Clear trebles are complemented by bass that packs a bit of a punch, making this one of the best-sounding AIO PCs we’ve had through the office.

Connectivity is yet another area where the EeeTop ET2203T excels. Along the right edge we have silver headphone and microphone sockets, a memory card reader and twin USB ports. Easily accessible at the machine’s rear are a further four USB ports, a Gigabit Ethernet port, and some relatively rare additions that will be greatly appreciated by many enthusiasts. First of these is an optical audio output, with which you can stream sound digitally to an external surround sound system. Even more welcome is an HDMI input with which you can connect external devices such as a games console, a feature that’s inexplicably omitted on many AIOs with great Full HD screens (we’re looking at you, HP TouchSmart IQ810).


An attractively-implemented tray-loading Blu-ray drive behind the right bezel completes the ET2203T’s credentials as something of a home cinema system. In fact, the only possible additions we might have liked to see are an inbuilt TV tuner and a remote, but to be fair you can always get these separately (though extra clutter does run counter to the whole All In One concept).

So far, this EeeTop is doing well, but let’s see how it holds up in terms of those all-important internals, which in this case are limited exclusively to mobile (i.e.laptop) parts to keep the thickness to below 50mm.


Processing duties are handled by an Intel T6600 Core 2 Duo processor running at 2.2GHz, which is certainly fast enough to cope with anything the average consumer might care to throw at it. It’s backed up by the usual 4GB of RAM that’s pretty much the standard on anything from laptops to gaming PCs these days (though unfortunately a 32-bit version of Windows 7 Home Premium won’t be able to take full advantage), while a 5,400rpm 2.5in hard drive provides a generous 500GB of storage. 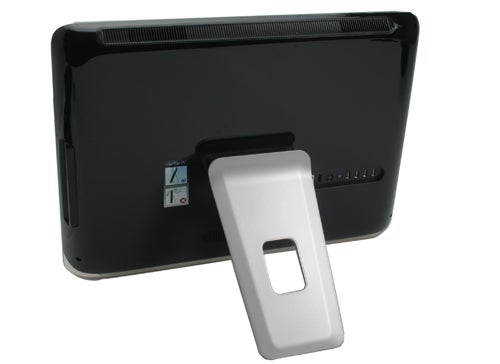 Video is usually the area where AIOs are weakest as high-end mobile graphics chips tend to cost an arm and a leg. In this case a discrete ATI Radeon HD 4570 with 256MB of memory will do a good job of video acceleration and playing older games, but struggles with anything more demanding – especially at the screen’s native resolution. As an indication, running TrackMania Nations Forever and Call of Duty 4 at 1080p returned average figures of 17.5 and 16 frames per second respectively, though admittedly this was with details turned up to maximum on the latter.


Bluetooth is absent but Wi-Fi N makes it to the party, so the only cable you need to get the best out of Asus’ latest EeeTop is the power lead with its integrated power brick. 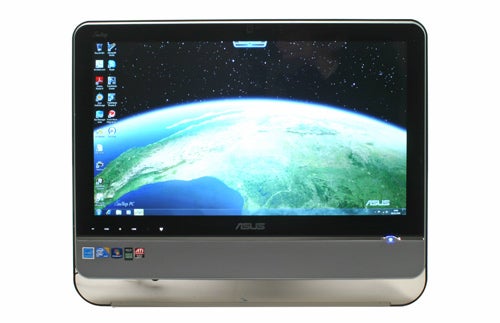 Though it’s easy enough to find attractive AIOs with similar internal specifications from the established players such as Dell, Sony or HP, for the ET2203T’s £785 asking price its provision of a Full HD screen and Blu-ray drive as well as little touches such as the HDMI input really do put it in a value class of its own, despite its lack of a multi-touch screen. However, it’s worth keeping in mind that the smaller Full HD 21.5in cousin of the award-winning 27in iMac can be had for only £165 more with a more powerful (desktop) CPU, full-metal chassis and glass-fronted screen, though this does lose you the Blu-ray drive and touch capabilities.


Asus has created an attractive and well-built All-In-One PC with an excellent mix of components available for a relatively affordable price. As long as you’re not looking for a machine to game on (though you can hook up a games console to the decent screen) or want a multi-touch experience, this is definitely one to consider.