An executive netbook? We asked for one and for our sins Asus appears to have delivered one. Called the Eee PC S101, it is Asus’ latest effort to create a new niche in netbook computing. It attempts to re-create the premium look and feel of an ultra-portable notebook, but with the processing power and price more familiar to netbooks. We only need to find out whether it can deliver the right balance of quality, features and price to make the “premium” netbook a worthwhile investment, so let’s get on with it. 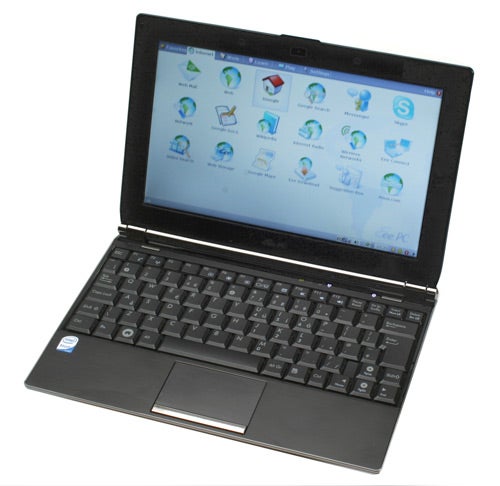 Visually it certainly pushes all the right buttons. If the only measure of success was you didn’t want people to think you were cheap, then the S101 passes with flying colours. It has a classy and cohesive feel that’s very reminiscent of Asus’ own ultra-portable, the U2E, though it lacks the leathery touches. What it does have, however, is a rather attractive mocha brown lid and though it’s just as glossy as a “regular” Eee PC, it doesn’t have that toy-like veneer that so divides opinion.


Furthermore, whereas all the other Eee PCs have a slightly bulbous feel to them, the S101 takes every opportunity to make itself look and feel as slim as possible. Every corner and edge is curved, tapered and tucked to create a machine that undeniably earns the ultra-slim tagline Asus has chosen to give it. It’s obviously a light machine too, weighing in at just 1.1kg thanks to a lower capacity four-cell 4,900mAh capacity battery compared to the six-cell and 6,600mAh efforts of the Eee PC 901 and 1000H. We’ll get onto how this affects battery life a little later. 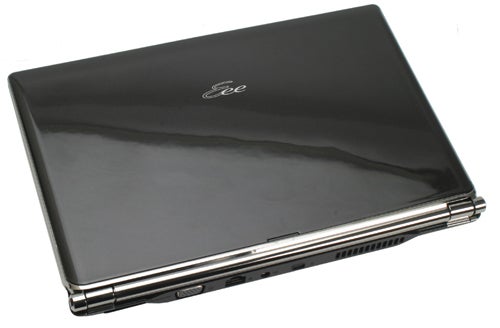 First, though, we should further enjoy the delights offered by the S101s sleek and slim chassis. Inside, below the keyboard, it’s finished in an attractive and classy black brushed metal and this is supplanted by glossy black plastic around the keyboard and screen. Meanwhile the edges and hinge are completed by a faux-chrome finish that nicely complements the darker touches, something that’s continued on the outside edges of the display.


Just above the keyboard are some nicely backlit status lights and in addition to the power button on the right there’s a power profile shortcut as well. As in other Eee PCs the webcam is housed above the screen while the accompanying microphones are below it, an arrangement that works just fine.

Continuing the intelligent design, we rather like how the air vent and primary connections, including VGA, Ethernet, DC-in and lock slot, are all housed on the back within a slightly enlarged section that tapers down again around the hinges. This ensures that the sides remain relative uncluttered, with just a USB port, headphone and microphone jacks on the right and a further two USB ports on the left. Finally, there’s also a memory card reader on the back and though this isn’t the most convenient location for regular access, it’s integrated quite neatly and if you buy the Windows version you get a 16GB SDHC card for it too.

Naturally enough the keyboard and touchpad have seen some improvements. We particularly like the positive feel and response provided by the keyboard. Thanks to the compact frame there’s practically no flex and keys bounce back crisply, aiding brisk and error free typing. Most importantly, since the S101 uses a 10.2in screen, there’s ample space for decent size keys. It also helps that the keyboard stretches almost right to the edges, so all the space available has been well utilised without too much compromise to the keyboard layout. 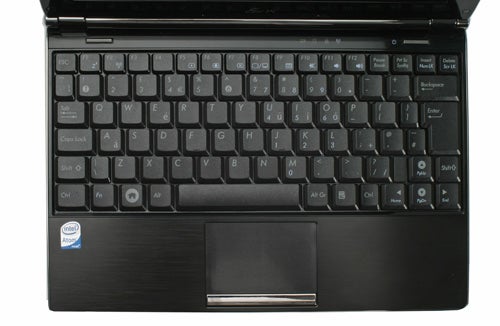 There’s a large UK style Return key and pretty much every element of the keyboard is at it should be, including Page Up, Page Down, Home and End keys mapped as secondary’s to the cursor keys. There is, however, one notable exception to this and it’s a problem carried over from all the Eee PCs: the right Shift key.


It’s a small annoying thing and it sits to the right of the upward cursor key. This leads to endless frustrations as you go to capitalise a letter, only to delete a whole paragraph instead because you hit the wrong key. It’s hard to describe how irritating this can be, but let’s just say we’ve come close to throwing the S101 out of the window as a consequence. Asus: sort it out! 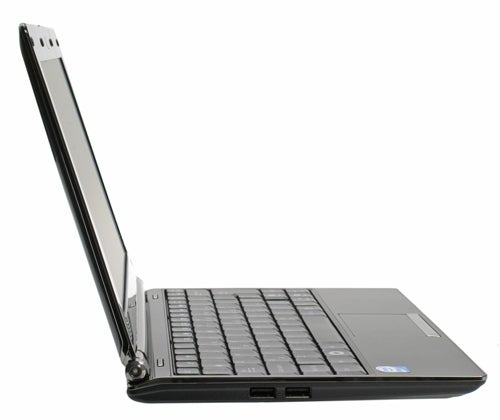 All this is a shame since beyond this issue the keyboard can’t be faulted greatly and neither can the touchpad. It’s probably the largest one to feature on an Eee PC, but it doesn’t get in the way of typing. Like other Asus notebooks and netbooks, the touchpad buttons, in this instance a rocker-style strip, feel a little stiff but they’re perfectly usable nonetheless.


Such sentiments are repeated for the 10.2in, 1,024 x 600 display. We still rather wish that the resolution was higher, but there are other factors that prevent that and fundamentally it’s a very useable display. It has an anti-glare finish so reflections aren’t much of a problem and it’s suitably bright too, thus enhancing its outdoor credentials. Videos and photos are presented well, though sometimes with a slight lack of contrast, while text is very sharp and easy to read. Like most netbooks the viewing angles are pretty mediocre, but in a machine this small and cheap it’s not a great concern. 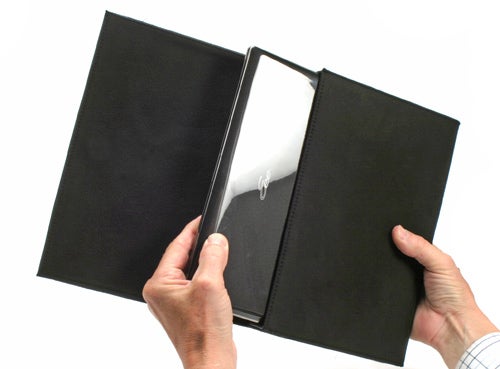 Like previous Eee PCs, a slip case is included, but instead of the usual neoprene effort, you get a smart suede-like affair with a magnetic flap. It’s very nice to handle and provides adequate protection when carrying your netbook around in a bag. And since the S101 is pretty well put together, small falls when inside the case shouldn’t be too much of a problem either. As mentioned earlier Windows versions also come with a 16GB SDHC card and it’s a smart move on Asus’ behalf, since we often find ourselves recommending one for expanding the internal storage. It has perhaps missed a trick, though, by not following Acer’s example by including two memory card slots – one for permanent storage and one for modular usage.

Despite all of its classy exterior touches, we shouldn’t forget that the S101’s innards a very much ‘netbook’ in origin. It’s powered by the usual 1.6GHz Intel Atom processor and the Windows version features 1GB of RAM. For storage you get a 16GB SSD along side the 16GB SDHC card, bringing the total to 32GB, while network connectivity is handled by a Wireless-N capable Wi-Fi module and 10/100 Ethernet. You also get Bluetooth, so you’re hardly lacking in connectivity.

All this will set you back £449, though as you might have guessed from the pictures we’ve actually got the Linux version of the S101 here for review. It features a whopping 64GB SSD and 2GB of RAM as well, though Asus is still not certain it will actually be selling this version in the UK or at what price if it did. As such we’re reviewing the S101 as the Windows XP version, rather than the Linux version. As an observation, however, Asus’ Linux effort perhaps lacks the look and feel to match the S101’s sleek and professional pretensions – a view only enhanced by the fact you still get many of the more youth orientated applications loaded onto the machine.


In addition to all this you benefit from 20GBs of online “Eee Storage”, free for 18 months. This is a nice addition, though clearly not as convenient as having storage built-in. Software, on the Windows version, includes Windows Live Suite and Microsoft Works, while the Linux version will (if released) feature the usual array of pre-installed applications. As always you also benefit from a two year warranty.

Performance, given the specification, is more or less identical to those of previous netbooks, though the Linux version is noticeably peppier thanks to its complement of RAM. Nonetheless, in raw performance terms, the S101 has nothing that elevates it above a netbook costing half the price. This is obviously a bit of a mental barrier to get through, since plenty of people would reasonably argue about the value of such a proposition compared to the latest version of the MSI Wind, the U100-291UK. Now available for £339, less than the £360.00 we reviewed it at, it’s about as close to a comparable laptop replacement and is over £100 less.


As hinted at before the S101’s battery life is also inferior to those of its Eee PC counterparts, yet it’s not all bad news because it’s still very good and outperforms the majority of other netbooks. Running at 50 per cent brightness it managed to loop a standard definition video for four and a half hours using the Power Saving mode of Asus’ Super Hybrid Engine. This is a pretty solid result and general usage, including web browsing and word processing, produced regular four hour plus sessions. With very frugal use you could even manage five hours, so although it has less life in it than previous Eee PCs, it still trounces much of the competition. 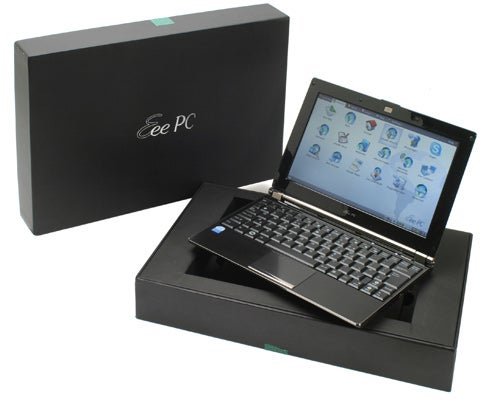 
All told we like the S101 in the same way that we like most ultra-portables notebooks, because it’s sleek, stylish and accomplished. Battery life is very good, while the keyboard, touchpad and basic feature set are also excellent, even if you don’t get much more than other cheaper netbooks. But price, as we all know, is an emotive issue. If you like your netbooks dirt cheap and care little for how they look and how you look using them, then it’s obviously not for you. If, however, you’ve liked the idea of a netbook but find the current efforts a little unrefined, then the S101 is your only real choice. As such, even if it’s not an “everyman” machine like other netbooks, we reckon the S101 deserves a recommendation because it’s discernibly different from what else is available – something you can’t say that often.